Birds-of-paradise is a general term used to refer to a collection of 39 species of tropical bird that are endemic to eastern Indonesia, Papua New Guinea, and eastern Australia. They are typified by some of the most beautiful plumage to be found on birds anywhere in the world, as well as incredibly elaborate courtship rituals to attract mates. The process of natural selection, which involves the traits of better-equipped individuals being passed on to their offspring, is how evolution occurs, and when this process takes place in remote locations, such as where these birds live, the results of thousands of years of evolution is just spectacular. Here is a selection of the most beautiful birds of paradise: 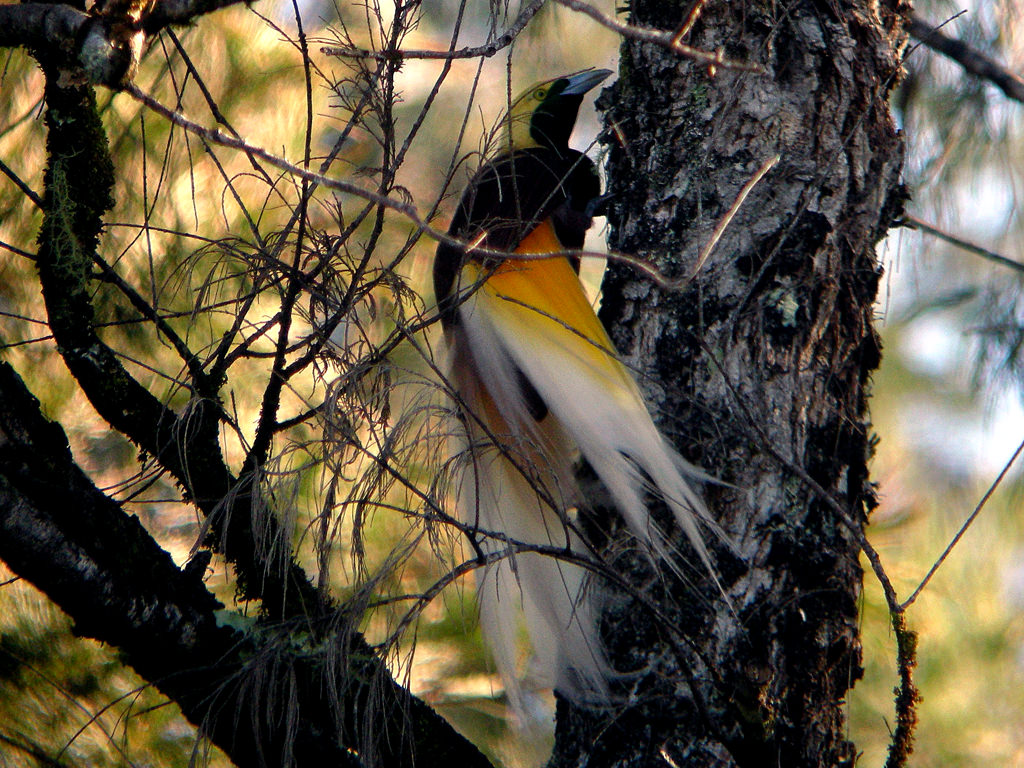 The lesser bird-of-paradise is native to the forests of northern New Guinea, as well as the nearby islands of Misool and Yapen. The male has an emerald-green throat, a pair of long tail wires and ornamental flank plumes that are deep yellow at their base, becoming whiter at their extremities. The female is maroon-colored and much plainer than the male.

Although similar in appearance to the lesser bird-of-paradise, the greater bird-of-paradise is a different species. It’s the largest bird-of-paradise extant today, with males measuring up to 43cm (17in). The male has a green face and an iridescent yellow-silver crown, with maroon-colored body plumage. Its flank plumes are yellow at the base, becoming whiter towards their extremities. The female is maroon-colored and smaller than the male. This species is found in southwest New Guinea and the Aru Islands of Indonesia. 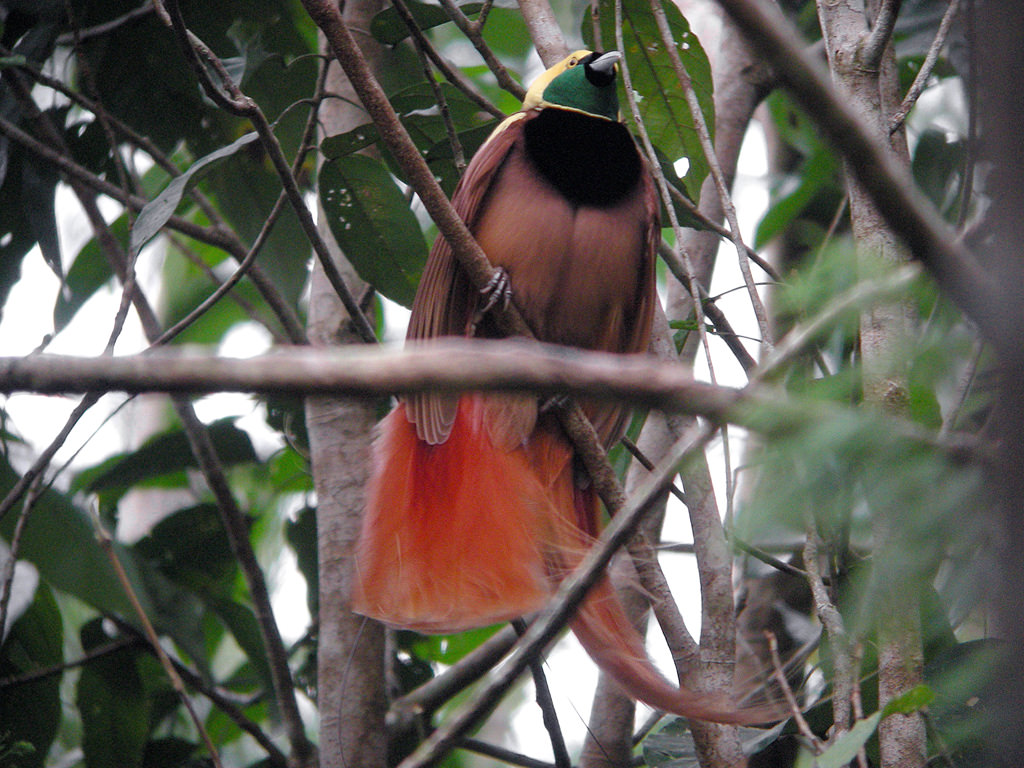 This polygamous bird-of-paradise, recognizable by its large reddish-pink flank plumes, is the national bird of Papua New Guinea. Males attract mates by clapping their wings and shaking their heads, and also feature long, black tail wires. Sexual dimorphism, as with most birds-of-paradise, is also present in this species, with females being comparatively dull-looking compared to the flamboyant males.

Some ornithologists believe this bird to be the most beautiful in the world. The male performs one of the most elaborate courtship displays in all of the animal kingdom – he hangs upside-down from a branch and proudly displays his violet-blue and cinnamon-colored flank plumes, together with his two ribbon-like tail feathers, to any would-be mates in his vicinity. Females are chestnut-brown in color. Sadly, the blue bird-of-paradise, endemic to Papua New Guinea, is now threatened with extinction, because the males’ plumage is highly prized and thus they are hunted. 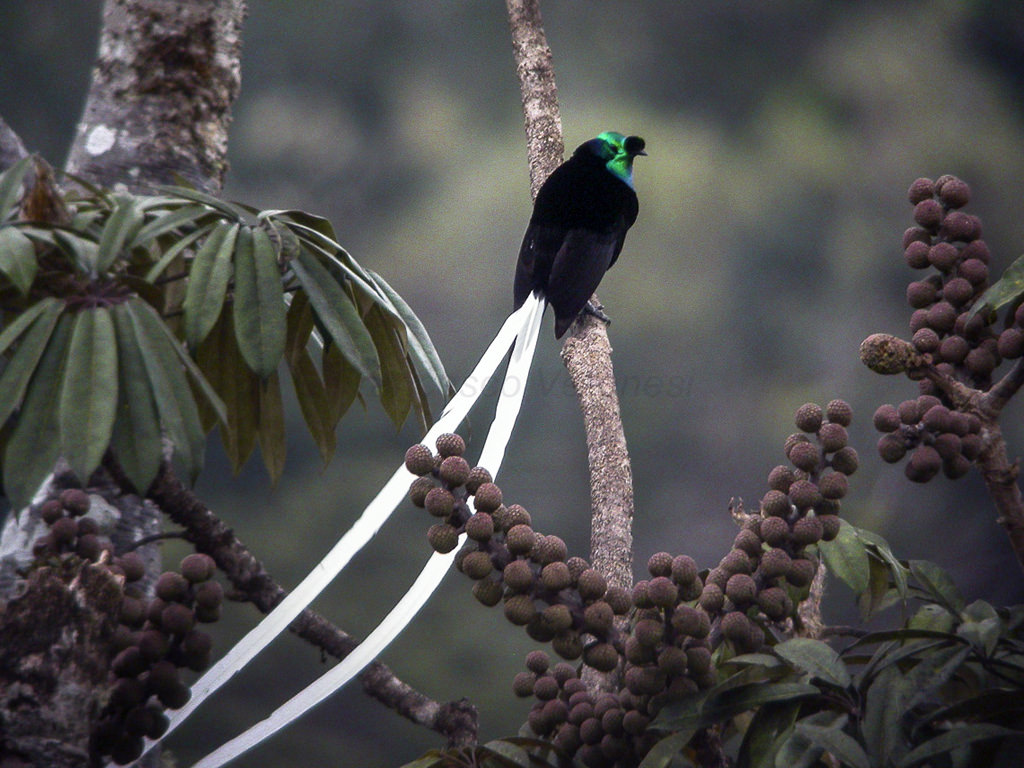 This bird is the most recently-discovered of all the bird-of-paradise species. It was first observed by the naturalist and explorer, Fred Shaw Mayer, in 1938. While males can grow up to 32cm long, their tail feathers can measure more than three times the length of their bodies – the longest tail feathers in relation to body size of any bird species in the world. Females are brown, with an iridescent head. The species is endemic to the central highland of Papua New Guinea.

Endemic to the Indonesian islands of Waigeo and Batanta, males have an emerald-green face, a pair of black, corkscrew-shaped tail wires, and ornamental red tail plumes, which take at least six years for the bird to attain. Females look remarkably similar to the males, however, they are smaller and have no ornamental plumes. This bird-of-paradise shares its habitat with Wilson’s bird-of-paradise, which you’ll see further down in this list. 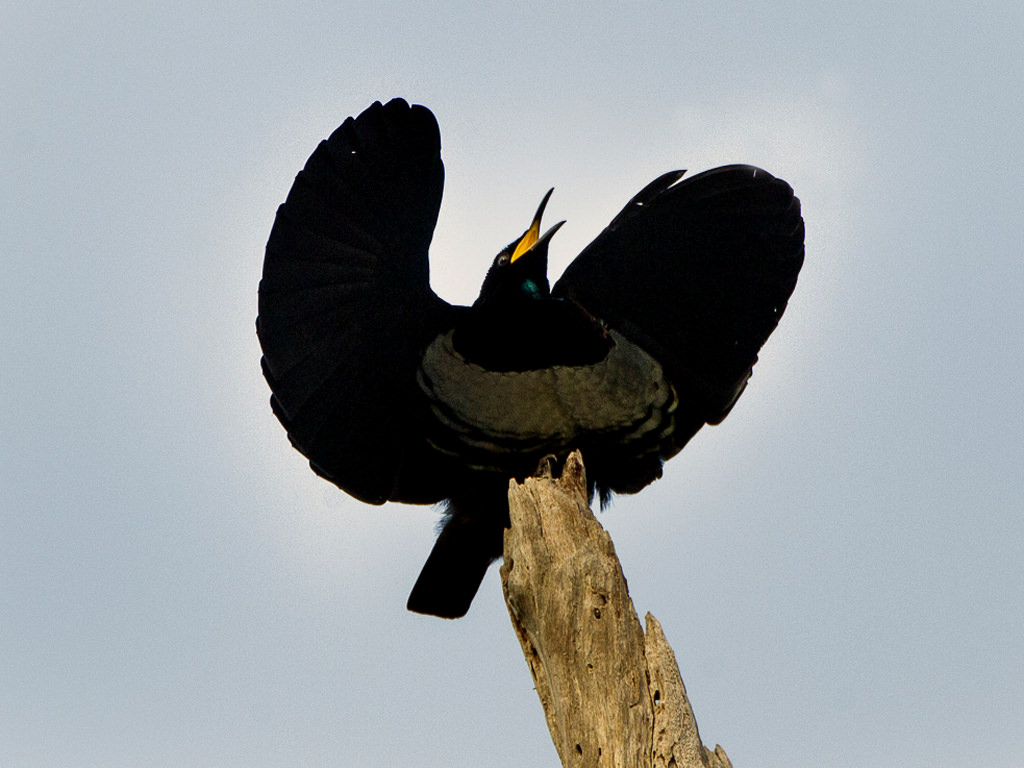 Discovered in 1848 and named after Queen Victoria, this bird is endemic to the Atherton Tableland region of Queensland, Australia. Males feature iridescent purple plumage, which is more blue-green on the head and bronze on the lower breast. They also have a curious triangular blue patch of plumage on their necks. Females are brown with white “eyebrows”. The male’s courtship display is fascinating – he curves his wings around his body and dances from side to side, while also puffing out his throat to accentuate his colorful neck plumage.

This species was discovered by German ornithologist Carl Hunstein in 1884 and is named in honor of Princess Stephanie of Belgium. It is a medium-sized bird, measuring some 37cm in length. Males are black in color, with iridescent heads. They also have two long, broad and purplish-black tail feathers. Females are dark brown with bluish-black heads The species is endemic to central and eastern Papua New Guinea. 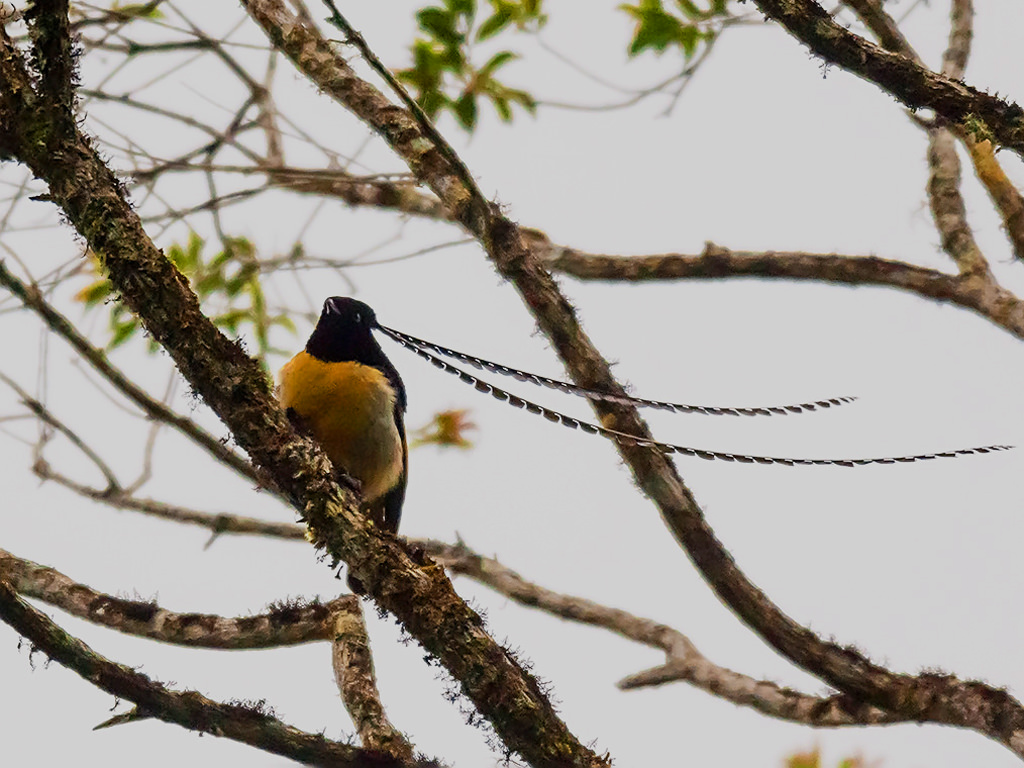 When male specimens of this bird were first brought to Europe, people didn’t believe it to be real thanks to its enormous ornamental head plumes that it can raise at will. Said head plumes can measure up to 50cm long – more than twice the size of its body. Males are black and yellow with dark brown irises, while their head plumes are white and blue. Females are grayish brown. The species lives on the island of New Guinea at altitudes of 1,300-2,800 meters above sea level.

This bird-of-paradise is endemic to Papua New Guinea and is named after Scot Andrew Goldie, who discovered the bird in 1882. Males can grow up to 33cm long and have yellow and dark green plumage with lavender-gray breasts. Their ornamental tail plumes are crimson-colored, and they also have two long tail wires. Females are olive-brown with cinnamon-brown undersides. 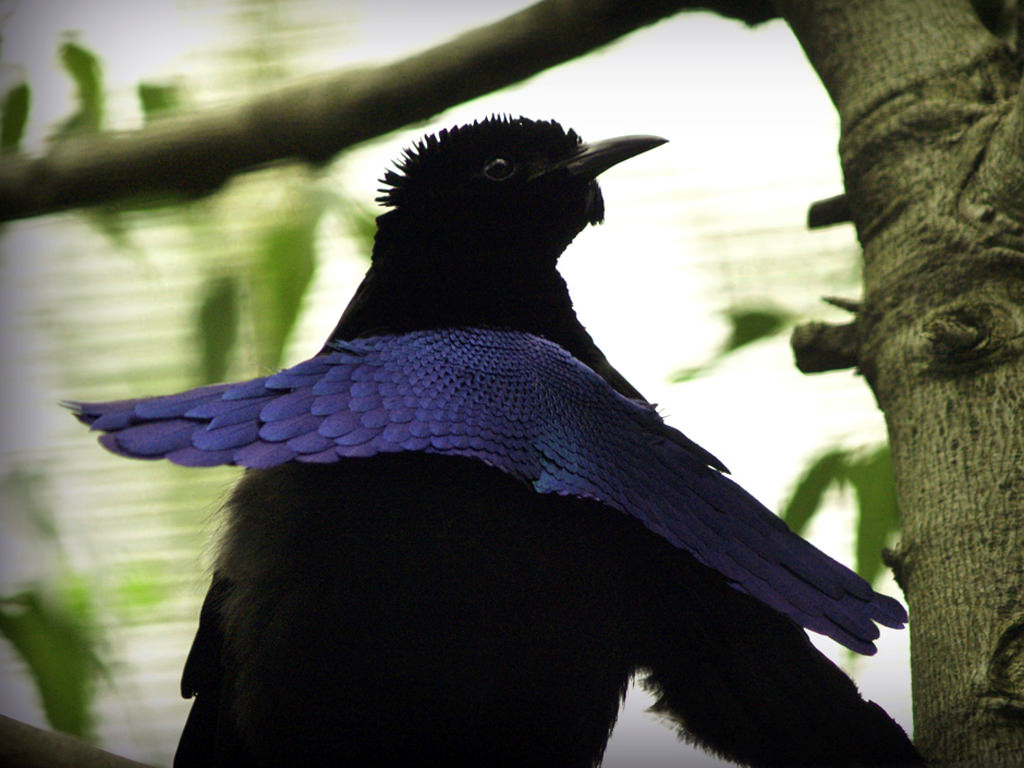 Characterized by a courtship ritual that is one of the most bizarre in the avian world, superb birds-of-paradise grow to about 26cm long. Males are black with an iridescent green crown and a blue-green breast shield. They also have a velvety black “cape”, which extends down their backs. Females are smaller and reddish-brown in color. Males are known to compete fiercely for mates, and this is due to a very low population of females relative to males. The species is endemic to the rainforests of New Guinea.

One of the smaller birds-of-paradise is also one the most colorful. Males feature red, black, teal, blue and violet in their plumage, and their heads are adorned with a black double-cross pattern. Their tail feathers curl back upon themselves in a spiral fashion. In contrast, females are brownish in color, otherwise only featuring a splash of blue on their crowns. 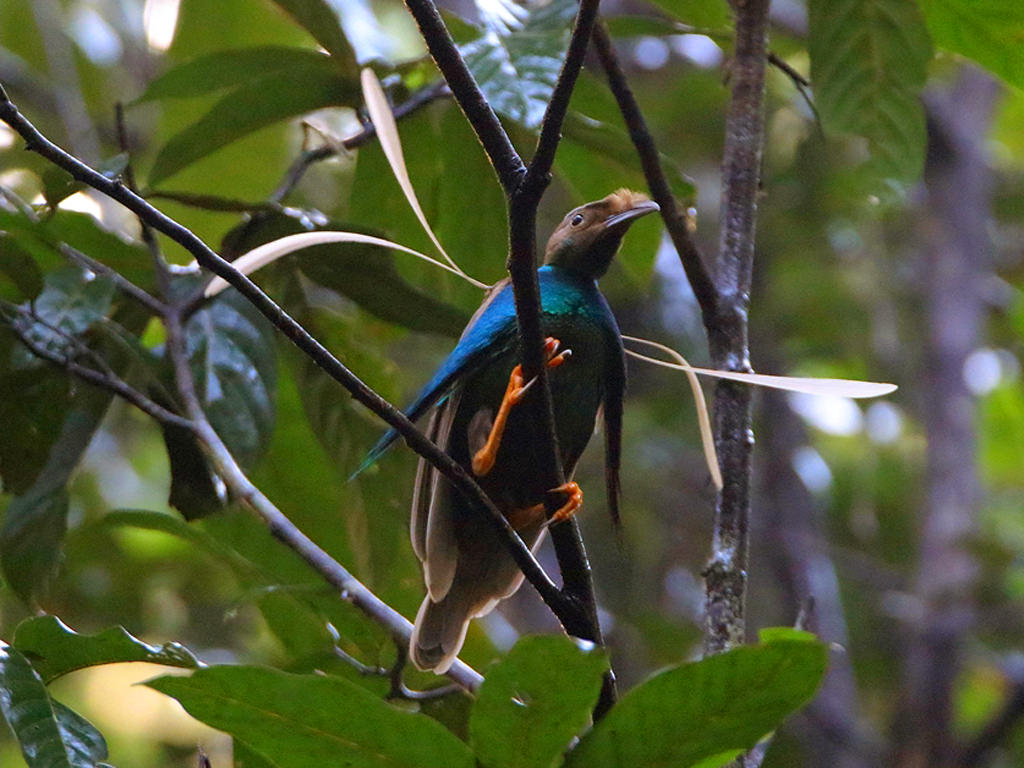 This species is believed to be the first bird-of-paradise ever brought to Europe. This is because of an account by Antonio Pigafetta, an Italian scholar and explorer who traveled with Ferdinand Magellan on the voyage that was to become the first-ever circumnavigation of the globe, that described a gift of birds with features very similar to a standard wing’s. Its colorful plumage belies something else hiding underneath – two pairs of long, white plumes that come out of the bend of a male’s wings and can be raised or lowered at will. Females are olive-brown and rather plain, yet have longer tails than the males do.

Despite its grandiose name, the kind bird-of-paradise is the smallest bird-of-paradise of all. Males are crimson and white, with sharply-contrasting bright blue feet. They also have fan-like plumes at their shoulders, which are colored green. Topping off this bird’s spectacular plumage are two elongated tail wires with emerald-green disk feathers at the tips. Females are a plain old brown! Courtship displays by males involve tail-swinging, the puffing-out of abdominal feathers and numerous acrobatic movements of their tail feathers. The species can be found on New Guinea and surrounding smaller islands.