Once upon a time we all knew and loved/loathed it as a canned food product... today it's taken on a whole new sinister side... 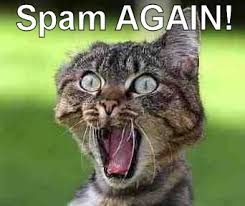 Spam and spam; spam, spam, and spam, toast and spam...

*sings to a Monty Python tune*

*looks around and runs back out giggling before anyone asks her age!*

We rather enjoyed Amunet and Devilwoman's contributions, we are sorry to see them go.

We think Amunet did you a good service with his spam Leila, as we had no idea how diversified you are.

We are puzzled why anyone would find fault with you for being a hardworking enterprising person; it does seem you work openly.  We admire the courage and moral discipline required to operate transparently.

We have hesitated to post our blogs on mutliple sites, partly because it takes a lot of work, partly because it uses more resources to state the same message, but we can't regard that as cheating, this is just trying to reach as many audiences as possible.

If some people put less effort into getting their messages out, they should not be jealous of the success of someone who works much harder, they should instead improve their own effort.

We suspect that if members are being 'drained away' from Ning sites it may have more to do with a lack of perceived value in those sites, we doubt that all their lost members all flock to Temple Illuminatus.

However, many people perceive themselves in a classic dualist paradigm of themselves against the world; such people often pick individuals to represent the entire world of their conflicts, and such may be the case of anyone who feels the world is somehow unfair to them in general or in the personages of specific individuals or institutions.

Sad for them really, but any good detractor is often worth their weight in advertising gold.

Carry on sister Leila, we love you!

Peoples actions always affect themselves more than anyone else...  I agree very much with your perspectives.

I may lose certain members, and have lost a few, and that's okay, if they can't pass the litmus test of my past and personality and accept that, then they're not going to be happy here anyways.

Because the door here is open wide to all deviants. *smile* I will not deny being one of them.

I am who I AM, and I do my best to be so with pride and integrity... and awareness of my own many flaws and imperfections as well as my gifts and blessings.

Now this is supposed to be a funny thread! So stay on topic or I'll put you in diapers, smack with you with a riding crop and post your pictures on the interwebs and show you just how diversified I can be! ;)

Permalink Reply by Leila Raven on March 30, 2011 at 3:20pm
people are TERRIFIED of diapers... it amuses me to no end! SPOOKY SPOOKY diapers are coming for you....

well that'll do it.... yeah... uck. I was thinking of unused diapers.. people are scared of those too! *crinkles nose*

Our begging style is denial... we refuse to beg to beg...  Confuses the heck outta Tina, but it seems to work for us...

Well, if your personal life/past counts to some as a reason to leave the group then TI wasn't really their kind of group I don't think!

I am deviant also!  BIG UP THE DEVIANTS!

And some information about the kind of spammers we've had.  I believe from a breed known as 'Trolls':

Ooh...and here's another good one!