I was watching my son with his friends, the other day. When ever they are going through some hard times, or something he(my son)doesn't agree with....he tends to drop them for awhile.

He told me once, he just didn't want to deal with their problems.  Odds are he doesn't know how to be supportive, or even non-judgmental.  I suspect that is something you learn as you get older.  Or is it?

I remember my mom teaching me not to judge a persons beliefs.....and you don't run when your friends are ill, or make bad choices.  I was raised with acceptance.  You may not agree with what they do/did.  But you stick by them and be supportive.

In later life, reconnecting with friends on the infamous facebook, you'd be surprised how many 'friends' I lost when they found out I was a witch.  And these are people I grew up with.  I've gotten to a point these days, telling people right off, 'I'm a witch, and if you don't agree with my life choices, you are free to leave and I won't be hurt.'  Many are very surprised, but once they are over the shock....they stay.  They support my life choices, just like they know that I support there's.

We may not always agree with each other, but we don't run from it either.  Even my born again cousin, doesn't run from me, though we argue most of the time.  To a degree he accepts who I am.  He gives me a nudge now and then, it's true....but he did that back when I was a christian.  It's his nature.

I know I've gotten of topic in my ramblings.  You guys should be used to that with me, by now.  is it, perhaps, today's kids that seem to 'not deal' with people that make different life choices?

Sorry, it's not for me.  I'm protective of ALL my friends, even when I don't agree with them. 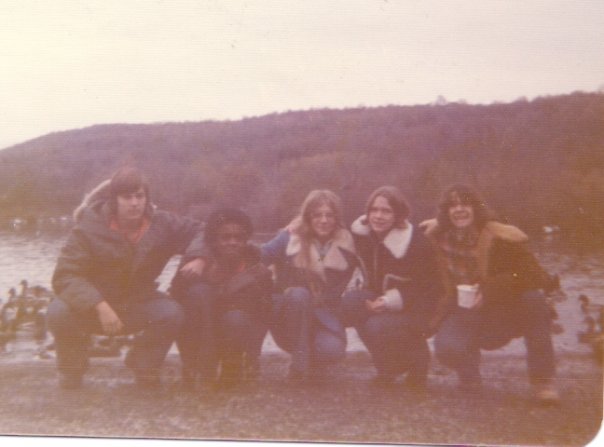 I've noticed the same in the youth of today. I believe that they are taught this in school. I know it sounds harsh, but I had the chance to peruse the Common Core Curriculum without being noticed, and you'd be shocked what they are ever so slowly indoctrinating this generation. They are taught that you can't be 'one' or stand out ... you MUST be part of the whole. As soon as I realized the impact of this 'rule of thumb' it reminded me instantly of the Borg in Star Trek ... one collective, no individuals. You think Ray Bradbury was trying to tell us something? I believe so. It seems the handful of powers-that-be want NO standouts ... standouts cause ripples which causes them difficulty in control over the sheeples of the day. They want you to be obedient to their whims, desires, causes, and NEVER ask any questions as questions are not allowed.

I don't know if this reason is directly the causative of your son's behavior, but I have seen more and more of it every year. They've been working on this program since the mid 70's, and every couple of years they tighten the noose over creativity, individualism, out-going personalities, or anything that causes a disruption of their program. I also believe that many things are transpiring now that 'we' of the older generation will start to be squished to adhere to their plan.

As far as being accepted for who you really are, I agree that sometimes coming forward right off the bat tends to quell their automatic 'first' impressions, or at least before it becomes cement in their conscious mind. It seems if you can beat their first impressions, they tend to be more accepting because it is not against their 'version' of you. But, I like you grew up in a more of the 'five golden rules' and sympathy, empathy, support, caring, and just plan kindness era.

Love your picture! Any camping involved? I LOVE to go camping.

Nope, not this time.  If memory serves(I was 16, I think)it was at a duck pond in Syracuse, NY in the valley.  We liked it there, you could feed the ducks.

Permalink Reply by Karen Black on January 4, 2016 at 5:48am
It is possible that when your sons friends get together in a group some illegal activity is discussed and your son wants no part of it. He does not want to be blamed and be the fall guy for the herds stupidity so he distances himself from the group / source of stupidity until the "storm has passed".
As for not supporting others, there are some folks in this world who are only happy when they are dragging other folks down with their own woes. To support people like that is to encourage them. Also, since no one can solve the worlds problems on their own, how can he decide who to help and who is being a "drama queen" ?
He may learn to discern who really needs his help as he gets older, but right now I think he has a very good sense of "self preservation".

Nope, he just doesn't want to deal with it.  When a friends father is rushed to the ER, or gets in a serious accident, he won't be around.  He will not deal with it.  A friend he went to highschool with passed....and they are only around 23-25. He wanted nothing to do with going to the wake....

It has nothing to do with illegal activities.....they all use drugs these days.

Permalink Reply by Karen Black on January 4, 2016 at 11:57am
Who does he turn to when he needs the support of others?

whoever his 'current' friend is.  they all seem to do this.  Currently, the black sheep is the guy who is trying to quit the heroine and pills.  And yes, he made bad choices......but he needs his friends for support.  I'm friends with him too....but I didn't run when I realized he made bad choices...but then again, I'm 'a mom to the world' according to my son.

I, too, Linda have found out if I just claim who and what I am, people are faced with it and it's harder for them to "run" because that would make them cowardly. If the evidence is out there but if you don't claim your truth, people feel more right about sneaking off in their discomfort and ignorance. ;)

I've had it backfire....some have just left....but that's okay.  I'd rather they just left, then as you say, sneak off.

I'm 58, and I hear you.  I actually did end up walking away from two, whom I thought were dear friends.  I didn't care that they chose different paths then mine.  I was given an ultimatum, (do this or else)and I chose the or else.  Usually, I am not like that.  I felt backed into a corner, I was pushed too hard.  It takes a lot for me to get to that point.

That being said, you need to learn(my son)how to deal with death, with sorrow.  You can't just keep running away from everything, or you'll be running all your life.  At some point you have to face life's problems.