Honoring Hekate on the Dark Moon: Suggestions for Rituals, Correspondences and Offerings

The Dark Moon, occurring on the astrological new moon, is a time that many followers of Hekate set aside to honor her. There are many different ways to perform a Deipnon ceremony, but most include preparation, cleansing, creating sacred space, the working and follow-up. In this article, I offer some recommendations including a list of correspondences and offerings appropriate for honoring Hekate at the Dark Moon or anytime.

There is no definitive “how-to” concerning honoring Hekate during the Dark Moon (or any other time). The answers for questions about honoring Hekate can’t necessarily be found in any book, although historical and contemporary writings about her can shine a light on how we should approach our rituals.

Honoring Hekate is an Intimate Experience

I typically honor Hekate with a pilgrimage to High Head, a stunning granite outcropping near my home on the Atlantic coast of Nova Scotia. This is a contemplative ritual including prayers to Hekate and connecting to certain epithets. This is my time to enter into a state of grace and wonder for all of creation. I see Hekate as the energy that fuels all living things. My idea is entirely personal, but since I had this notion I’ve discovered that others in modern times also see her this way and that The Chaldean Oracles provide a historical context for my intimate practice.

Honoring Hekate on the Dark Moon or any time can (and should) be a very intimate experience, reflecting your personal understanding of her. Including elements based on the historical practices can be a very meaningful way of expressing your feelings for Hekate.

Deciding what to focus on for the Deipnon (or any) ritual is a personal process. Hekate’s three formed nature is a context for situating my devotional acts that I often use. This can include honoring her Under World, Middle World and Upper World roles which correspond to my three selves and their primary energies of feelings, actions and thoughts. If you want to adapt this approach, you can select epithets that match her roles and are especially meaningful to you. You can write the epithets on black, red and white paper. Contemplate their meaning as you place them on the altar. If you are so inclined, you can write a hymn reflecting your chosen epithets.

You can also recite historical hymns to Hekate, including the popular Orphic Hymn: 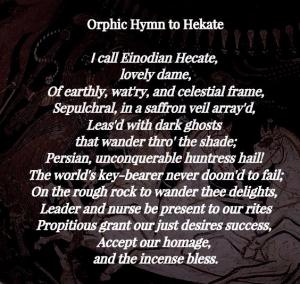 Other considerations for Deipnon preparations include constructing (or adapting) your altar, choosing correspondences and selecting offerings.

A Deipnon altar can consist of an image of Hekate, her symbols and certain correspondences that are added to help attune yourself and space to hers. You can read my recommendations for setting up altars and shrines involving Hekate in this article. New statues or objects should be consecrated prior to including in the altar. A simple technique is to anoint the object with an oil or potion consisting of botanicals from Hekate’s Garden, such as almond oil or a decoction (potion) made from her sacred plants. Concentrate on removing all nonessential energy from the object while preparing the object. The table below lists many of the historical and contemporary correspondences of Hekate. You can select different ones that are aligned with your focus to augment your ritual. 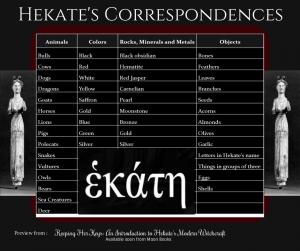 I typically clean my altar and add offerings on the Dark Moon.  The number three, like the colors of black, red and white can be incorporated. For this Deipnon altar, I made a tripod from poplar (associated with the Under World) and then hung charms on it (a coyote jaw bone, keys, etc.) and then placed offerings (garlic, etc.) on a Hekate’s Wheel to make a complete interior crossroads energetic space. You can also use dirt from a three way crossroads as part of your altar.

Traditional offerings often included the leftovers from ritual sacrifice, as well as a special supper left at the crossroads. This meal may have included cakes, meat and libations. I’m on the side that offerings should be of great meaning to the person presenting them, reflecting the spirit of the ancients’ practice rather than the content. 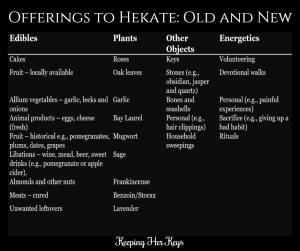 Although the ways I honor Hekate are both personal and contemporary, I am a true descendant of the ancient witches who called upon her through out shared focus on botanicals. I’ve included just a few plants from Hekate’s Garden in the above table, along with a few mentions of ways you can incorporate them into your Dark Moon ritual. If you’re interested in herbal magick, you’ll find more on the Keeping Her Keys Facebook page.

Other preparation considerations include the location and timing. If you’re going to an actual crossroads, consider the various aspects of doing this well in advance. For example, if there are animals in the area that may eat the offerings you don’t want to leave things that could poison them. Remember that a three way crossroads can be the joining of roads, paths or the nexus of land, sea and sky (which is my usual location). This is especially relevant as Hekate has dominion over these physical representations of the three energetic realms.

You can also plan what you’ll wear and the ingredients you’ll need for the cleansing process in the following section. Music is often a component of my rituals. I recommend checking out Byron Metcalf’s amazing drumming, in addition to the tunes about Hekate that you can find on my YouTube playlist. In addition, you’ll want to plan the method you’ll use for creating sacred space.

Purification was, and is, an important part of a Dark Moon ritual to Hekate, both of the home and the individual. Part of ancient ceremonies that I find particularly fascinating is the practice of touching the animal (often a dog) that would be sacrificed. The idea was that energetic dirt would be transferred to the animal. Once it was slain, that bad energy would be completely removed from the individual and their home. In addition, the remains of the sacrifice were also included as an offering to Hekate. Getting rid of bad energy – part of miasma in their ancient mindset – was a major component of religious activity. The foundation of the contemporary practice of offering Hekate leftovers on the Deipnon probably grew out of this historical one, as did the ritual home cleansing (along with the altar).

Many followers purify their body prior to a Dark Moon ritual with a similar focus as those ancients transferring their bad energy onto the “scapegoat” (or “scapedog” in this instance). Ritual bathing using incenses and infusions in the water that will both attune and purify our energies prior to a working are part of the purifying process. There are many plants in Hekate’s Garden from which we can create incenses and infusions. Frankincense is one of my favorites as is a potion made from mugwort, lavender and rosemary added to the bath. Steep about 1 tbsp of mugwort with 1/2 tsp rosemary and lavender in two cups of boiling water for twenty minutes, then add to the running water in your bath. (You can strain this if you don’t like bits of things in the water.)

A ritual bath helps to cleanse both the body and mind. Personally, I try to enter what I call a “state of grace” the day I am doing a ritual honoring Hekate by purifying my thoughts (as much as possible) through not complaining, focusing on the good and avoiding interactions that are likely to interfere with my desired mindset. Some devotees “go dark” prior to Deipnon rituals to help cleanse their thoughts and feelings. Deipnon is a state of being much more than it is offerings and words. Meditation can help to create a beneficial mindset and to focus your attention. If I had to give an order of preparation activities, I would put meditation after purification. I think the two are part of the same process of energetic preparation.

I also eat light and minimize consumption of things that alter my psycho-spiritual-biological state. For example, I try to avoid caffeine which doesn’t always work that well. The idea is that purification requires effort. These activities help us enter in the state of grace I talked about earlier. Maybe it’s the lack of caffeine and sugar that makes me feel light headed and otherworldly. Others choose to completely fast on the day of the Deipnon.

Creating sacred space is in one sense an extension of the purification process, but it’s also the time we invite Hekate’s attention to our ritual. This is accomplished through using her epithets, reciting a hymn or prayer or doing an evocation. That evocation I wrote has been used by hundreds over the years as a devotional ritual. It’s highly suited for your Dark Moon working. Maybe it will inspire you to write your own. Feel free to adapt it and use it as you feel led.

I am a committed circle caster, so I always do this before I launch into energetically calling upon Hekate. There are many ways to cast a circle. The energetic theme is to cast out all that doesn’t serve the ritual ahead and to call in what does, in this case it’s Hekate. The practitioner’s mental focus is all important in the creation of the circle. I’ve written about creating sacred space for Hekate here and you can read my technique for casting Hekate’s Wheel in this article.

Once the sacred space is created, then you can recite your selected text and make your offerings at the altar. If you are taking your offerings to a crossroads, but doing the ritual at the altar, you can remain in the circle while doing so. Envision the energetic barrier travelling with you. Once all parts of the ritual are complete, open you space and always process the experience through writing or art.

Magick on the Dark Moon

I want to briefly mention magick on the Dark Moon before ending this article. I rarely do witchcraft on the Deipnon, although there is nothing wrong with doing so. Some followers do healing rituals on the Dark Moon as well. If you do magick during this time, I recommend that you also perform a ritual honoring Hekate. 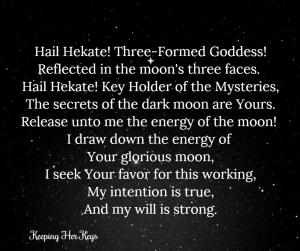 I love that thousands of practitioners from diverse perspectives all come together to honor Hekate on the Dark Moon. While we all have our personal understanding of Hekate (which can be strikingly different), we are united in our practice of performing rituals on this day. However you choose to honor Hekate on the Deipnon, I wish her blessings for you.