Howling Against the Moon: The Last Wolves of Ireland The man followed the tracks through the snow. His hound sniffed eagerly, almost pulling the leash from the man’s grasp. The wolf was not far ahead of them.

Through a break in the clouds a full moon appeared momentarily.

The man shivered and shook his shoulder, allowing the strap of his gun to come loose.

He released the hound and raised the barrel pointing it towards the furthest trees.

From the darkness of the woods came a terrible howl.

Was that my dog or the wolf, the man wondered, slowly stepping into the shadow of the forest .

Although we can’t be certain, records show that the last wolf in Ireland was killed by a farmer, John Watson, and his wolfhound on Mount Leinster in County Carlow. Surprisingly, this took place in the year 1786, almost five hundred years after the last English wolf and over one hundred years since the last wolf was shot in Scotland.

For people today it can be a surprise to learn that wolves were so prominent in Ireland up until so recently. Yet Ireland has a long relationship with wolves, with these creatures having been there since at least 34,000 BC, according to the latest carbon dating on remains.

When the last ice age ended, Ireland’s landscape was the perfect environment for wolves to thrive. There were mountains and forests and regions of tundra to roam, and which provided a wide variety of animals for the wolves to prey upon such as deer, wild boar and, for a time, the Giant Elk.

It is estimated that the first people arrived in Ireland around 8000 BC, although there is more recent evidence of a possible settlement dating back another 5,000 years. For these people the wolves must have been a constant danger as well as competitor for food.

Indeed, up until the middle ages Ireland was often referred to as Wolfland because of how many wolves there were. This would also be part of the reason for the many barricaded ring forts which acted as a defence against the wolves who would roam the country in large packs.

Ireland’s wolves were so well known in the middle ages that even William Shakespeare, in his play As You Like It , had a character remark, “ Pray you, no more of this; ‘Tis like the howling of Irish wolves against the moon. ”

In Brehon Law, Ireland’s early law system, a landowner or livestock keeper was required to keep wolfhounds, such was the threat of wolves. 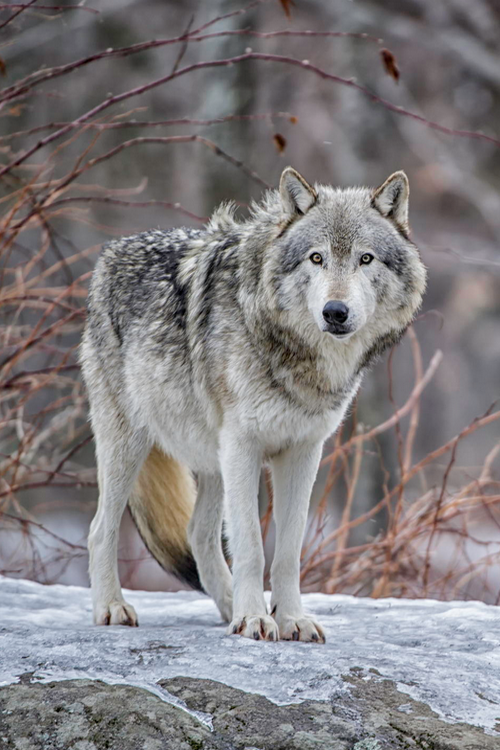 Having such a presence ensured that Irish myth and folklore often referred to wolves and sometimes to a more supernatural incarnation, the werewolf.

Ireland’s most famous legendary High King, Cormac Mac Airt, was said to have been raised by wolves. Cormac’s mother was also supposedly of the line of Ocl, which is the reflex of the Indo-European word for ‘wolf’.

In one of Ireland’s most famous mythological texts, The Tain Bo Cuailnge , The Morrigan, Ireland’s dark Goddess, turns into a wolf in order to stampede cattle.

In Lady Speranza Wilde’s collection of folk tales, Ancient Legends, Mystic Charms, and Superstitions of Ireland , a farmer discovers that a young wolf he once rescued belongs to a family of werewolves living in a nearby forest.

There are also the stories of the legendary Laignach Faelad, who were supposedly a tribe of warriors who were half-man and half-wolf. They are mentioned in the Medieval Irish text the Cóir Anmann . These were mercenary fighters who would take the side of any king willing to pay their price. Approaching them to ask for their help was dangerous enough, but the price they demanded was even more terrifying. According to legend, these wolf warriors would only fight if they were being paid with the flesh of new-born babies!

In George Henderson’s Survival in Belief among the Celts, in the chapter: Soul in Wolf-form , he writes,

“The existence of this belief in animal parentage is seen from the Leabhar Breathnach. Here we read: ‘The descendants of the wolf are in Ossory (síl in Faelchon in-Osraigib). There are certain people in Eri, viz. the race of Laighne Faelaidh, in Ossory; they pass into the form of wolves whenever they please, and kill cattle according to the custom of wolves, and they quit their own bodies; when they go forth in the wolf-forms they charge their friends not to remove their bodies, for if they are moved they will not be able to come again into them.”

He goes on to write that in a particular legend of these people, the Ossarians, a man and woman would transform into wolves every seven years. Henderson links this to an account by Caesar of the Celtic god Dis Pater , who was represented wearing a wolf-skin. The same chapter states, " The wolf skin leads to the presumption that the god was originally a wolf, roving and ravaging during the night time.”

So, if Ireland once had so many wolves, what happened? Where did they go? Depiction of the werewolves of Ossory. ( Public Domain )

The Beginning of the End

Although there had been previous culls, it was only after Cromwell’s conquest of Ireland that wolves were finally seen as a threat that had to be eliminated, once and for all. More forests were being cut down, more land was being farmed, and fields were filling with livestock. All of these factors brought man and wolf into contact more and more. A pack of wolves can travel up to 30 miles (48 kilometers) in a day and so with their territory shrinking as Ireland’s population expanded, the danger of encounters grew more inevitable. Staigue Fort Ring Fort, 3rd or 4th Century, Ireland. Such forts were used to protect from invaders and wolves. (Amanderson2/ CC BY 2.0 )

In 1653, a bounty was placed upon the wolves which was particularly attractive to hunters; five pounds was offered for a male, and six pounds offered for a female. This was the beginning of the end for the Irish wolf. Over the next century they were hunted from their previous habitats. Oak forests were cut down and people began to settle in areas which previously had been wild and safe territory for wolf packs.

Finally, and after almost 150 years of this persecution, wolves were finally wiped out in Ireland. Although the last reported killing of a wolf was in Carlow in 1786, this is not to say that another wolf, perhaps a small pack, did not live on for a few more years in a more remote part of Ireland, perhaps dying on their own terms on a mountain overlooking the land where their ancestors had roamed and hunted for over 30,000 years.

The Future of Wolves in Ireland

Today, Ireland is a country with a huge agriculture industry, where livestock can be found everywhere, from fields close to suburban areas, to wild and inhospitable mountains. Every now and again there is a call for wolves to be reintroduced but how realistic can this be? And how fair is it to the wolves?

Wolves are not the evil killing machines that we often perceive them to be. For all of our legends and fairy tales, it is telling that there is a scarcity of reports of Irish people being killed by wolves in history books and accounts. Although opportunistic, wolves do not actively seek to engage with humans. However, the damage to livestock would present huge problems. As well as this, there is not enough wild territory left in Ireland to accommodate a successful wolf pack.

And yet even today, many Irish people feel an unexplainable affinity to the wolf. This is not just about acknowledgement and respect, but something more; something inherent and in the Irish blood. This animal existed and hunted in Ireland for generations. Perhaps it is an ancient genetic memory of the time when the sight of a pack moving through a forest would sing a primal song in the hearts of ancestors, or maybe it is the guilt of knowing that something primal and connected to the soul of this country has been lost.

Whatever it may be, Irish people, even today, feel a strong bond with the totemic animals that once roamed the mountains and forests of Ireland and which gave the country its ancient name: Wolfland.

Driscoll, K. The Early Prehistory in the West of Ireland: Investigations into the Social Archaeology of the Mesolithic, West of the Shannon, Ireland. (2006)

George Henderson, 1911. Survival in Belief among the Celts, the Chapter: Soul in Wolf-form P.172