Magdalena Solis also known as the High Priestess of Blood... 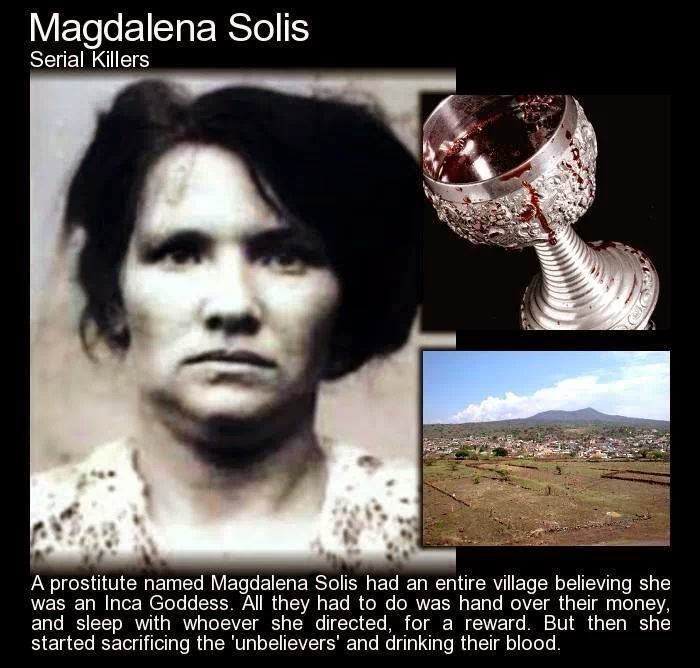 Magdalena is actually a pretty rare serial killer.....
.Magdalena was a sexual killer
She led a cult  that performed human sacrifices and torture..She even drank the blood of her victums..she was eventually  arrested but was only charged with two murders....
No matter how hard the authorities tried, they  just couldn't link her to the others  she spent  50 years in prison  only...
http://en.wikipedia.org/wiki/Magdalena_Sol%C3%ADs
http://murderpedia.org/female.S/s/solis-magdalena.htm
Long accounts of the case are given in:
[Richard Glyn Jones, “Magdalena Solis: The Cult of Human Sacrifice,”  The Mammoth Book of Women Who Kill,Carroll & Graf Publishers; 2002, pp. 392-399]

Magdalena Solis, also known as the High Priestess of Blood...


was a serial killer and member of a Mexican cult responsible for orchestrating several murders which involved the drinking of the victims' blood....She was convicted of two of the murders and sentenced to fifty years in prison.....


She came from a poverty-stricken dysfunctional family, and entered into prostitution at a young age..a profession in which she worked until her marriage with the Santos and Cayetano Hernandez cult in 1963.... Her brother, Eleazar Solis, acted as her pimp during this time.....

Magdalena Solis was an organized murderer and sexual predator who killed in groups. She is one of the few documented cases of female serial killers who had clear sexual motivations,...

She was responsible for at least eight murders, although the numbers have been speculated to be higher, committed in the small community of "Yerba Buena", near the city of Monterrey in the Mexican state of Nuevo León. Magdalena represented herself as a goddess and ordered numerous sacrifices for blood rituals,,,,,,

In late 1962 and early 1963, brothers Santos and Cayetano Hernandez, a pair of petty criminals, reached the small town of Yerba Buena, a marginalized community in northern Mexico with fifty impoverished and mostly illiterate inhabitants. As part of a scam, the brothers proclaimed themselves prophets and high priests of the "powerful and exiled Inca gods." The brothers demanded worship and tribute from the villagers in exchange for treasures hidden in the caves of the mountains surrounding the village....

Faced with possible exposure, the Hernandez brothers traveled to Monterrey in search of prostitutes who would take part in the farce. They eventually made contact with Solis and her brother, who traveled back to Yerba Buena with them. During one of the cave rituals, using a smoke screen, the Hernandez brothers introduced Solis as the reincarnation of an Inca goddess. Solis developed a severe theological psychosis and took over the sect. Under her leadership, their rituals became more grisly and perverse as Solis became enamored with consumption of blood and sadomasochism.

Solis drank from the chalice and then handed it to the priests (the Hernandez Brothers and Eleazar Solis), and finally the other members, each who had their turn to drink. The belief was that this gave them extra-natural powers.

Now based on elements from Aztec mythology, "the blood was the only decent food for the gods, through it they preserved their immortality." The goddess needed to drink blood to stay young forever. Magdalene was supposedly the reincarnation of the Aztec goddess Coatlicue.

The butchering went on for six continuous weeks in 1963, a period in which 4 people died in this way. In the last sacrifices they reached the point of dissecting the heart of the victims alive....

In May 1963 when a 14 year old local resident, Sebastian Guerrero, wandered near the caves where the Solis sect was performing their rites. Attracted by the lights and noises coming out of one of the caves, he witnessed one of the rites in progress.

He ran over 25 km, from Yerba Buena to the town of Villa Gran, to the nearest police station. He failed to give any other description of the "group of murderers who prey on ecstasy and who were gluttonously drinking human blood."

The next morning, an officer, (Investigator Luis Martinez) escorted him home and in the process he was able to show him where he had seen the vampires. That was the last day that Sebastian Guerrero and Luis Martinez were seen alive.

Police, dismayed by the disappearance of Guerrero and Martinez, now took the case seriously. On May 31, 1963 police, in conjunction with the army, deployed an operation in Yerba Buena. Eleazar and Magdalena Solis were arrested on a farm in the town, in possession of a considerable amount of marijuana. Santos Hernandez was shot by police bullets while resisting arrest. Cayetano Hernandez was assassinated by one of the members of the sect, called Jesus Rubio, who, before the crisis, wanted to be a part of the body of high priests for protection.

In subsequent investigations they found, first, the carved up bodies of Sebastian Guerrero and Luis Martinez, near a farm where the Solis siblings were arrested (they had removed the heart of the latter in the style of Aztec sacrifice). They then found the bodies, also dismembered, of the other six persons in the vicinity of the caves.

Magdalena and Eleazar Solis were sentenced to 50 years in prison for only two homicides (those of Guerrero and Martinez), they were not able to confirm their participation in the other six murders because all the cult members arrested refused to testify.

Many members of the sect were shot in the shootout with the police because, as they were armed, they barricaded themselves in the caves. Those who were arrested were sentenced to 30 years in prison for six counts of murder in the form of "group or gang murder, or lynching." Their illiterate and pauperised condition served as mitigating factors. It was not until years later that some ex-cult members spoke of the cult.