Mami Waters is one of the most well-known of Vodoun Loas and in fact the name Mami Wata is ancient, so ancient that the name or word “ Mami” is to be found in every root language. Mami means simply, Mother, and in some ancient tongues also means Wisdom and Truth. Tiamat , the primordial Dragon Goddess Creatrix  of Mesopotamia, was also known as Mami.

The Priestesses of contemporary Vodoun are called Mammissi.

Uati is the root word that “wata” originates from and is an ancient Egyptian word meaning the sea or the ocean. This is also the word used by the Khoisan, or as they are known , the Bushmen of Southern Africa which are one of the only so-called Stone Age peoples still surviving in a cohesive unit; to mean the ocean or great waters.

Uati is one of the oldest praise names of more than ten thousand for Isis.

The Queen of Magic was first worshipped as Mama Uati in Egypt and as Mami, or Aruru, in Mesopotamia , and it is thus remarkable that as Mami waters, Isis is still revered as The Divine African Mother, just as in modern-day Pagan culture Isis is revered by many as The Mistress of Magick.

Mother of the Waters

The Temple of Isis at Philae

The versatility of Isis is also shown in another of Her Names, Au-Set. This means, literally, “Lady of the Throne” and goes back to the primeval Goddess, Ua-zit, the Great Serpent creatrix of Egyptian mythology. In fact, Isis sometimes manifests with the lower half of the body as a serpent, just as Lilith, Persephone, Aida-Wedo and a host of other Deities ( including of course, Mami Waters) sometimes appear.

“I am Nature, the Universal Mother
Mistress of all the elements.
Primordial child of time,
Sovereign of all things spiritual.
Queen of the dead, Queen also of the immortals,
The single manifestation of all gods and goddesses that are,
My nod governs the shining heights of the heavens,
The wholesome sea breezes.
Though I am worshipped in many aspects
Known by countless Names….
Some know me as Juno, some as Bellona, the Stygians as Proserpina…
The Egyptians who excel in ancient learning and worship
Call me by my true Name,
Queen Isis”

Isis appears everywhere in both ancient and classical mythology as is read here:

“ I am She that is the natural mother of all things, mistress and governess of all the elements, the initial progeny of worlds, chief of powers divine, Queen of Heaven, the principle of the Gods celestial, the light of the goddesses:
At my will, the planets of the air, the wholesome winds of the seas,
and the silences of Hell be disposed;
My Name, my divinity is adored throughout all the world,
in diverse manners, in variable customs and in many names.
Some call me Juno, others Bellona of the Battles; others, Hecate.
Principally the Ethiopians who dwell in the Orient,
And the Egyptians who are excellent in all kinds of ancient doctrine, and by their proper ceremonies accustomed to worship me, call me Queen Isis”

Excerpt from “The Golden Ass” by Lucius Apuleius

Isis was further syncretised with Ereshkigal as Hecate Ereshkigal in around 400 BCE.
(Before Common Era)

Ereshkigal is Inanna's Dark sister, the Queen of the Underworld, or Summerlands. The Arabian Mother Goddess, Al'lat, is another Name of Goddess Ereshkigal.

Many Goddess adherents nowadays view all Goddesses as being One Goddess, almost like a multi-faceted crystal with thousands of sides or faces. Each individual is drawn by a mirror ; and some, are drawn to look at themselves in many!

One could see Goddess as Tao; un~knowable, yet revealing Her ineffable presence to those who Love, and Live in love! Within the Diagram of the Supreme Ultimate, there are two complementary opposite colours, Black and White, which form the whole. However, within the large Yin there is a little Yang, and vice versa. There are no absolutes in Nature; and within every light there is darkness, as within the soft darkness, there is Light.

Some other titles of Isis are:

Isis is probably best known in mythology as one of the two and a half other Goddesses aside from Lilith, to obtain the ineffable name of God which has magickal powers and thus take His power for Herself.

Isis, just as every other Goddess, has two sides to her personality. She was known as one of The Two Ladies, the other being Nephthys, Her sister and wife of Set. Nephthys (identified by the classical Greeks with Ereshkigal) and Isis always worked together and were known as the Sisters of Darkness and Light.

Isis had temples dedicated to Her worship in just about every land from the main temple on the Nile river, to Germany, England and India, and formal worship of the Great Goddess continued until severe persecution of all Pagans put a stop to this and her followers went underground. The influence of Isis was so powerful amongst early Christians that to keep the people happy, the same exact statue of Isis and Horus, used by devotees of the Goddess for centuries, was  appropriated by these religions to represent the Madonna and baby Jesus.

Another hotly debated issue amongst Pagans is the apparent enmity between Set and Isis, evidently caused by Set slaying Osiris, and the constant battles between Set and his cousin, Horus, the falcon god and son of Isis.
This saga has in my opinion been terribly misunderstood by many Pagans and scholars. Just as Apophis, the Great Serpent, was guided by means of magical iron rods by Set, and not slain by him or any other Deity.One should remember that it was the early Coptic Christians who were responsible for the essential twisting of the True meanings and relevance of our ancient pagan Hirstory.

The medieval religions used the image of Set “slaying’ the Dragon to mean the victory of Christianity over Paganism and the Serpent, shown by St. Michael and others so-called killing the Dragon or Serpent which was and is the symbol of Paganism. (The heart that never dies).

Apophis represents the very energy that courses through the universe or Dragon power, which the Goddesses and Gods control and guide to ensure that the serpent energy which really makes the world go round, does not get out of control and become too destructive.

Every day, Set and others guide the Serpent which supports and powers the solar boat in which the goddesses and gods travel. Au-Set, Set, Nephthys and Osiris ( and by extension, Horus and Anubis) were depicted as one family by the ancients, bound by blood and spirit. Here we can see very clearly that the Deities are not actually slaying each other, but in the mythology , the interplay of Light and Dark Magick (as in the Yin-Yang) is shown by the interactions and interplay between the Goddesses and Gods.Thus, the return of Asar to the Underworld is denoted by the setting sun on the horizon; as is the rising of Goddess in Venus. There can be no creation without destruction, no spark of genius without the deep Abyss of the unconscious.

We should be able to recognise that all Gods were once Goddesses; and that the Feminine principle was first. All Gods emanate from the Divine Feminine, and that is a reason why the Ancients portrayed the Deities as Androgynous.Sexual stereotyping must therefore be left behind when discussing God and Goddess in myth and Hirstorical legend. Spirit knows no gender.

The division of the sexes on a spiritual level only came about as a result of patriarchy, and can thus be identified as such and safely ignored as an artificial construct , made to confuse people and remove them from the Truth.

Set and Nephthys to represent Death, and Isis and Horus to represent Life. This was done in a simple story fashion to explain the way the universe works to the common Egyptian who was not admitted to the mysteries. Probably because the tales are so simple in essence and because modern people do not relate to ancient Egyptian culture, the misunderstandings and confusions have arisen . The rivalry between Set and Horus was at first meant on a purely metaphorical level; and was further elaborated on over time.

There are always layers of meaning to the Ancient legends, which can only be unveiled once all layers or levels have been unlocked.

What most do not know, is that there was a well-documented historical competition on many levels between the northern and southern kingdoms of ancient Egypt, which lasted for thousands of years. The symbol of the Kingdom of the North was the Vulture (Buto) and the Southern Kingdom, Wadjet (Ua-zit) the Cobra or serpent. As the two halves of the Kingdom were separated by climate and distance, there was a natural “rivalry” that developed on the economic , social and cultural levels of society. This was a friendly rivalry which never developed into open warfare or civil war but rather it strengthened both kingdoms and united them firmly. One has to ask if these kin, family members, really wanted to kill one another why one never succeeded given their tremendous powers? Thoth, later known as Hermes, the Master Magickian was called upon continually to mediate between the two to resolve their differences.

The term “killing” and “slaying” meant a very different thing to the Ancient Egyptians in the context of mythological stories, than the taking of a physical life – no-one “slayed” anyone in these divine stories, just as Queen Isis did not have to find actual pieces of Osiris’ body, but in fact went in amongst the common people, in humility, and eventually succeeded in bringing spiritual and physical unity once again to the fragmented Kingdom, previously divided by petty differences.
Osiris could never be killed as the Gods and Goddesses are immortal and energy cannot be destroyed, it just changes shape or form. Thoth, or Hermes, was the Magickal mentor of Isis and taught the Queen all that he knew until Her powers exceeded even His.

Just as Light and Dark, masculine and feminine energies, or Yin and Yang forces need each other to survive and thrive in Nature, so the symbolic interplay between Set in the North and Horus in the South was necessary for Egyptian religion and social life to ensure harmony and balance. What is revealed here is the difference between the winged vulture of the North and the Serpent of the South and the combination of the two in Egyptian symbolism. This can be seen as the mythological union of the bird of prey ( meaning the God in various ancient cultures from the Vedic culture in the east to the Mayans in the west) and the Serpent, (representing the Goddess), in the Egyptian context. The Winged Serpent is the ultimate primal Pagan Deity as seen in the symbolism of this culture. When the Eagle and the Serpent are separated, there can be no harmony or balance spiritually. When combined, they become the Dragon, or spiritual enlightenment.

We eventually become the Goddess we worship!

Faith is like seeing a trickle of water, becoming a stream – and knowing that the stream flows into an Ocean 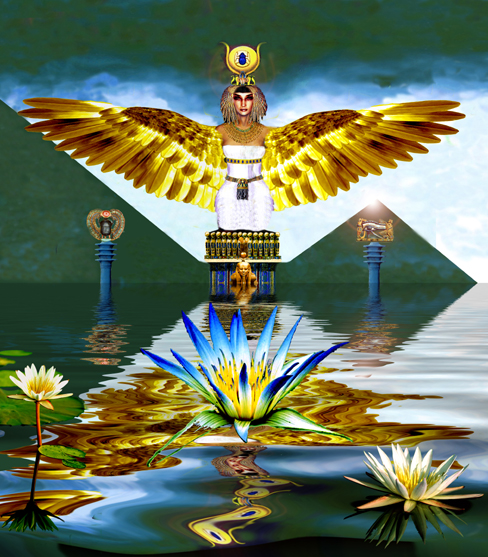