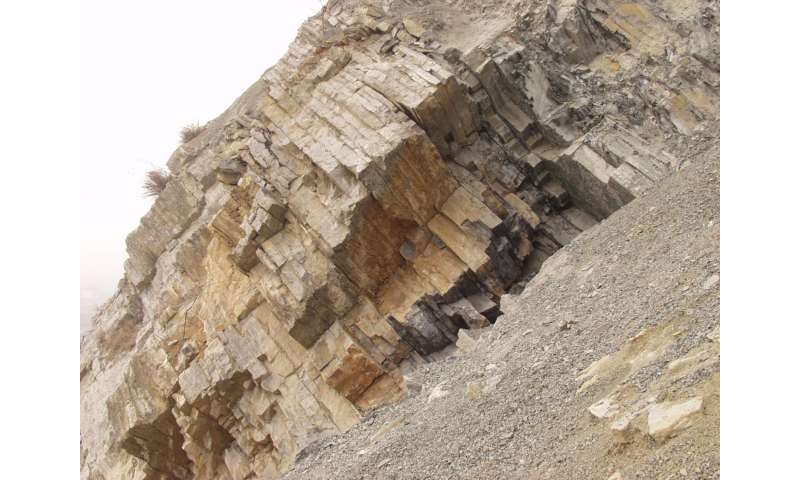 In the past 540 million years, the Earth has endured five mass extinction events, each involving processes that upended the normal cycling of carbon through the atmosphere and oceans. These globally fatal perturbations in carbon each unfolded over thousands to millions of years, and are coincident with the widespread extermination of marine species around the world.


The question for many scientists is whether the carbon cycle is now experiencing a significant jolt that could tip the planet toward a sixth mass extinction. In the modern era, carbon dioxide emissions have risen steadily since the 19th century, but deciphering whether this recent spike in carbon could lead to mass extinction has been challenging. That's mainly because it's difficult to relate ancient carbon anomalies, occurring over thousands to millions of years, to today's disruptions, which have taken place over just a little more than a century.

Now Daniel Rothman, professor of geophysics in the MIT Department of Earth, Atmospheric and Planetary Sciences and co-director of MIT's Lorenz Center, has analyzed significant changes in the carbon cycle over the last 540 million years, including the five mass extinction events. He has identified "thresholds of catastrophe" in the carbon cycle that, if exceeded, would lead to an unstable environment, and ultimately, mass extinction.

In a paper published in Science Advances, he proposes that mass extinction occurs if one of two thresholds are crossed: For changes in the carbon cycle that occur over long timescales, extinctions will follow if those changes occur at rates faster than global ecosystems can adapt. For carbon perturbations that take place over shorter timescales, the pace of carbon-cycle changes will not matter; instead, the size or magnitude of the change will determine the likelihood of an extinction event.

Taking this reasoning forward in time, Rothman predicts that, given the recent rise in carbon dioxide emissions over a relatively short timescale, a sixth extinction will depend on whether a critical amount of carbon is added to the oceans. That amount, he calculates, is about 310 gigatons, which he estimates to be roughly equivalent to the amount of carbon that human activities will have added to the world's oceans by the year 2100.

Does this mean that mass extinction will soon follow at the turn of the century? Rothman says it would take some time—about 10,000 years—for such ecological disasters to play out. However, he says that by 2100 the world may have tipped into "unknown territory."

"This is not saying that disaster occurs the next day," Rothman says. "It's saying that, if left unchecked, the carbon cycle would move into a realm which would be no longer stable, and would behave in a way that would be difficult to predict. In the geologic past, this type of behavior is associated with mass extinction."

Rothman had previously done work on the end-Permian extinction, the most severe extinction in Earth's history, in which a massive pulse of carbon through the Earth's system was involved in wiping out more than 95 percent of marine species worldwide. Since then, conversations with colleagues spurred him to consider the likelihood of a sixth extinction, raising an essential question:

"How can you really compare these great events in the geologic past, which occur over such vast timescales, to what's going on today, which is centuries at the longest?" Rothman says. "So I sat down one summer day and tried to think about how one might go about this systematically."

He eventually derived a simple mathematical formula based on basic physical principles that relates the critical rate and magnitude of change in the carbon cycle to the timescale that separates fast from slow change. He hypothesized that this formula should predict whether mass extinction, or some other sort of global catastrophe, should occur.

Rothman then asked whether history followed his hypothesis. By searching through hundreds of published geochemistry papers, he identified 31 events in the last 542 million years in which a significant change occurred in Earth's carbon cycle. For each event, including the five mass extinctions, Rothman noted the change in carbon, expressed in the geochemical record as a change in the relative abundance of two isotopes, carbon-12 and carbon-13. He also noted the duration of time over which the changes occurred.

He then devised a mathematical transformation to convert these quantities into the total mass of carbon that was added to the oceans during each event. Finally, he plotted both the mass and timescale of each event.

"It became evident that there was a characteristic rate of change that the system basically didn't like to go past," Rothman says.

In other words, he observed a common threshold that most of the 31 events appeared to stay under. While these events involved significant changes in carbon, they were relatively benign—not enough to destabilize the system toward catastrophe. In contrast, four of the five mass extinction events lay over the threshold, with the most severe end-Permian extinction being the farthest over the line.

"Then it became a question of figuring out what it meant," Rothman says.

Upon further analysis, Rothman found that the critical rate for catastrophe is related to a hidden process within the Earth's natural carbon cycle. The cycle is essentially a loop between photosynthesis and respiration. Normally, there is a "leak" in the cycle, in which a small amount of organic carbon sinks to the ocean bottom and, over time, is buried as sediment and sequestered from the rest of the carbon cycle.

Rothman found that the critical rate was equivalent to the rate of excess production of carbon dioxide that would result from plugging the leak. Any additional carbon dioxide injected into the cycle could not be described by the loop itself. One or more other processes would instead have taken the carbon cycle into unstable territory.

He then determined that the critical rate applies only beyond the timescale at which the marine carbon cycle can re-establish its equilibrium after it is disturbed. Today, this timescale is about 10,000 years. For much shorter events, the critical threshold is no longer tied to the rate at which carbon is added to the oceans but instead to the carbon's total mass. Both scenarios would leave an excess of carbon circulating through the oceans and atmosphere, likely resulting in global warming and ocean acidification.

The century's the limit

From the critical rate and the equilibrium timescale, Rothman calculated the critical mass of carbon for the modern day to be about 310 gigatons.

He then compared his prediction to the total amount of carbon added to the Earth's oceans by the year 2100, as projected in the most recent report of the Intergovernmental Panel on Climate Change. The IPCC projections consider four possible pathways for carbon dioxide emissions, ranging from one associated with stringent policies to limit carbon dioxide emissions, to another related to the high range of scenarios with no limitations.

The best-case scenario projects that humans will add 300 gigatons of carbon to the oceans by 2100, while more than 500 gigatons will be added under the worst-case scenario, far exceeding the critical threshold. In all scenarios, Rothman shows that by 2100, the carbon cycle will either be close to or well beyond the threshold for catastrophe.

"There should be ways of pulling back [emissions of carbon dioxide]," Rothman says. "But this work points out reasons why we need to be careful, and it gives more reasons for studying the past to inform the present."

Provided by: Massachusetts Institute of Technology

This is one of the reasons I don't own a car.

Permalink Reply by Elspeth on October 3, 2017 at 5:05am
Apparently scientists are trying to develop methods for mass carbon dioxide extraction. Seems that's the way forward in their minds.