May Full Moon: The Power of Hekate’s Fires 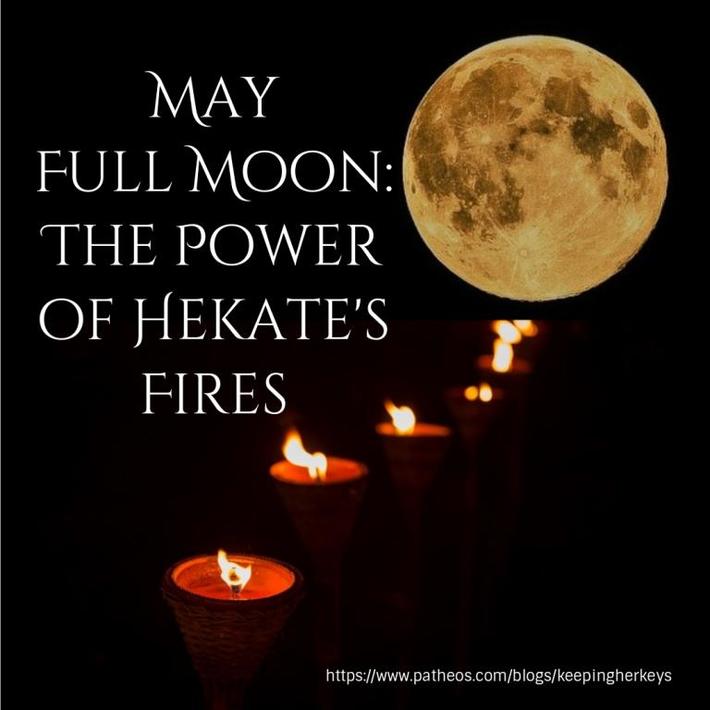 Hekate’s Wheel of Fire comes full circle on the May Full Moon, when her torches ignite new life. Gone is the decay of autumn and the gloom of winter. It’s time we exit her cave deep in the Under World. The rebirth cycle complete, we walk anew, strengthened by her fire that burns within each of her witches. Celebrate Hekate’s Wheel of Fire with a ritual honoring her, calling forth their power and igniting your own unique flame.

It is with this spirit of the diversity of Hekatean Witchcraft wherein we reside, claiming our individual witch-fire while strengthening Hekate’s presence on earth through our rituals. It is a sign of Hekate’s power and that of her witches that celebrating Hekate’s eternal flame on the Full Moon in May has become a modern tradition embraced by thousands across the globe.

Hail Hekate, the Hieros Pyr! Goddess of the Eternal Flame! Torch Bearing Mistress of the Crossroads! She who holds the Wheel of Fire that is without end of beginning. In May the cycle is complete as the Wheel turns to creation once again.

The Rite of Her Sacred Fires, the annual global celebration hosted by the Covenant of Hekate, has been observed since May 2010. Long enough for it to be a well-established part of Hekate’s Wheel of the Year. When I first participated seven years ago, I took the script offered by the Covenant as inspiration, creating a ritual of revelation including a mask. I’ve never been one to follow rituals verbatim, and I encourage you to make your workings similarly your own. Including the Wheel of Fire ritual below.

There’s much more to Hekate’s Fires than those ubiquitous torches leading the way, including her role as the Fire of Creation and the source of our Witch Fire. Indeed, the ancients associated fire with Hekate as both blessing and bane. Evoke her fiery epithets to further connect with the ancient power of Hekate’s Fires. 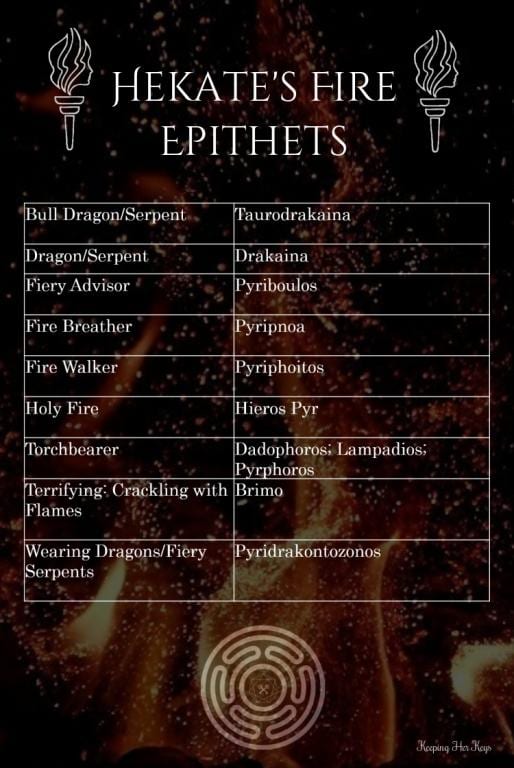 Hekate’s fire epithets can be used to petition her attention for all types of witchcraft.

Thou hallowed fire, weapon of Hecate the road-goddess, that she bears when ministering in Olympus on high and in her haunts by the sacred cross-ways on earth. From  Sophocles’ Fragments, Vol. 2   (Translation: Pearson, 1917)

A few years ago, I had a vision of Hekate’s Fires as a pentacle, with five distinct types of flames with her torches igniting them all. To me, this reflected the true power of Hekate’s Sacred Fire, the Hieros Pyr. 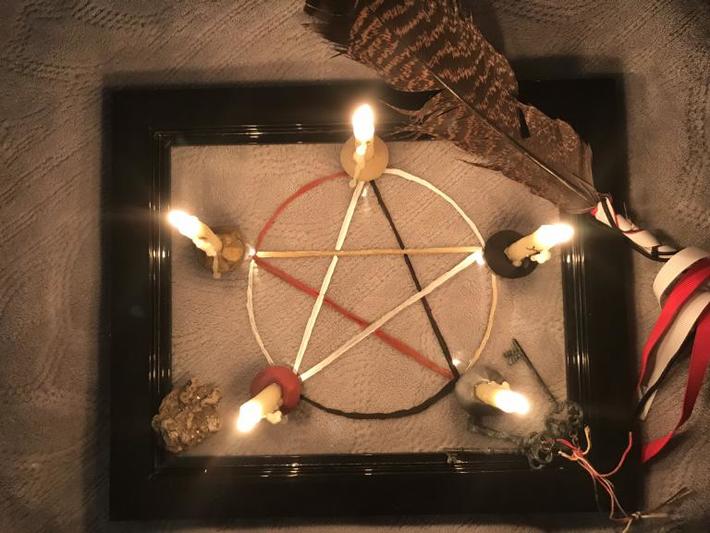 Hekate as the Hieros Pyr

Hail to the Hieros Pyr! The most powerful and primal of Hekatean symbols. Fire moves, it breathes, it bends, and it dances. Hekate’s Wheel of Fire spins, blending and empowering all that dare dance within it. This ritual activates the kinetic power of fire by connecting us to Hekate’s Wheel of Fire that consists of five sacred flames:

I’m sharing this ritual in a format designed for you to do on your own, based on one we do in Hekate’s Modern Witchcraft on the May Full Moon. The Full Moon is an ideal time for summoning the power of Hekate’s Sacred Fires since the moon illuminated brightly by the sun reflects the role of Hekate as divine mediator between the earth and heavens. Envision the full moon as such, a sort of way station between the Star-Fire and the earthly fire of the material world. This perspective comes from The Chaldean Oracles’version of Hekate as a complex force from which the fire of creation flows.

Purification with water is especially helpful to prepare for fire rituals. It is the counterweight to the Holy Darkness Cycle performed during November and December, balancing the energies of darkness through celebrating her brightness. If your personal Wheel of Time is not attuned to the seasonal energy of creation, then the Holy Darknessrituals of reclaiming, retrieval and rebirth may be more suitable for you.

Materials: A candle for each fire is recommended. Ash for anointing yourself is also suggested. For ash, use the remains from burning a suitable botanical sacred to Hekate, such as mugwort, sage or thyme.

Botanicals: The Hieros Pyr Incense and Holy Fire Water are suitable for this ritual. Directions can be found here.

The energy for this ritual is to evoke Hekate’s presence and to petition her sharing of the Hieros Pyr with you, merging your flame with hers. To call her forth, you can use the Evocation of Hekate Suitable For Any Rite. You can recite the story of Hekate’s Wheel of Fire as well: 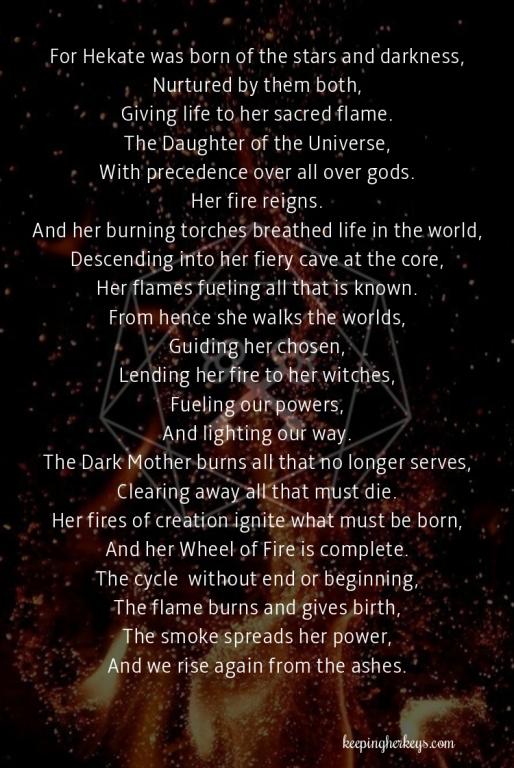 After each fire is called, light the candle associated with it. Take time to feel the power and merge with it. If you can’t have flames in your space, battery operated ones will do just fine. My advice is to take your time with the text, allow Hekate and the energy of each of the fires to come forward after petitioning each type. You can approach the flames as an observer or allow them to merge with you, or step right into the fire (although I don’t recommend this unless you are completely confident in doing so). Behold her Hieros Pyr as you feel led, including adapting the ritual.

Hekate, I call upon you as the Hieros Pyr,
The Queen of the Sacred Fires,
Bestower of life,
Destroyer of lies.
You are the Wheel of Fire.
As the Star Fire,
You fuel the Upper World,
And the mysteries,
Grant me the power to see the structure of the universe,
To know the order and the chaos.
You are the Fire of the World,
Lend to me the flame of creation,
So that I can give life to all that I need to bring forth.
You are the guiding torch along my journey,
May I follow your path gladly.
Hail to thee as the source of the witch fire,
May I be ever strengthened by this flame.
And you are the fire of destruction.
Render me the wisdom to let go of that which must burn.
I summon the powers of your Hieros Pyr to me now.
I claim their powers by marking myself with ashes,
And I bless this smoke, sending forth the power of  your fires,
Hail to thee, Hekate, Hieros Pyr!
I honor you on this night of your Sacred Fires!

Note: The May Full Moon can fall either in Taurus or Gemini, adjust this ritual according to these influences if you wish. Hekate within Tauraus is the Bull-Headed Taurokarenosand within Gemini is she the twinned Amphiprosopos.

Join The Witches’ Realm to participate in our celebration of Hekate’s Fires. 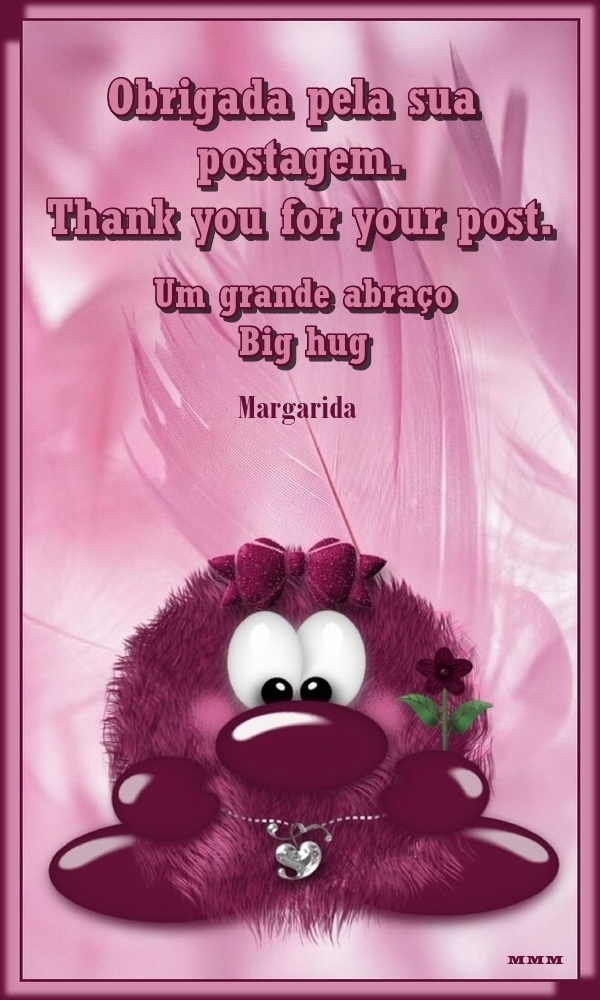