1. Touch the forehead, and say
HOOR-PAAR-KRAAT
2. Touch the breast, and say


Lesser Ritual of the Hexagramm

This ritual is to be performed after the "Lesser Ritual of the Pentagram".

1. Stand upright, feet together, left arm at side, right across body, holding the wand or other weapon upright in the median line. Then face East and say:

3. Extend the arms in the form of a cross, and say: "The Sign of Osiris Slain." 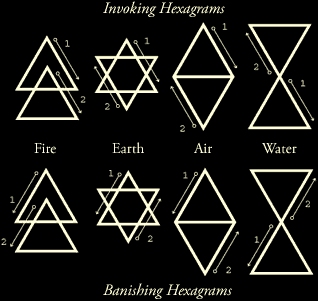 8. With the magical weapon trace the Hexagramm of Fire in the East, saying, "ARARITA".

This Word consists of the initials of a sentence which means "One is His Beginning: One is His Individuality: His Permutation is One."
This hexagram consists of two equilateral triangles, both apices pointed upwards. Begin at the top of the upper triangle and trace it in a dextro-rotary direction. The top of the lower triangle should coincide with the central point of the upper triangle.


9.  Trace the Hexagram of Earth in the South, saying "ARARITA".

This Hexagram has the apex of the lower triangle pointing downwards, and it should be capable of inscription in a circle.


10. Trace the Hexagram of Air in the West, saying "ARARITA".

This Hexagram is like that of Earth; but the bases of the triangles coincide, forming a diamond.


11. Trace the hexagram of Water in the North, saying "ARARITA".

This hexagram has the lower triangle placed above the upper, so that their apices coincide.

The Banishing Ritual
is identical, save that the direction of the Hexagrams must be reversed:

Greater Ritual of the Hexagramm


Unlike the Lesser Ritual of the Hexagram, the Greater Ritual does not come with a step-by-step instruction in Liber O.
According to some magicians, the procedure of the ritual is exactly the same as the Lesser Ritual of the Hexagram except for the figures that are "drawn" and the addition of a godname. These practitioners interpret the "conjurations" specified by Crowley as simple vibrations of "Ararita" and the name of the God corresponding to the planet or sign.
A different and more sophisticated reading dictates that the magician not work in the four quarters, but rather towards the actual position of the planet (or zodiacal sign) in the heavens. (Failing that, work towards the direction of the element associated with the sign or planet.) The "conjurations" in this case are more elaborate invocations, whether extemporized, of original composition, quoting from the Holy Books of Thelema, or otherwise elaborated. In this method of working, the ritual must be carefully tailored to the specific occasion and purpose, although individual magicians may develop a repertoire of planetary conjurations to use within the "Greater Hexagram" mode of operation.
For example, to invoke Jupiter, the Magician would face the direction of Jupiter at the place and hour appointed, and sound a battery of four knocks (four being the number of Jupiter). Then he would recite an ARARITA invocation (derived in this case from "Liber DCCCXIII"):


O my God! One is Thy Beginning! One is Thy Spirit, and Thy Permutation One! Thou has appeared unto me as a jocund and ruddy God, full of Majesty, a King, a Father in his prime. Thou didst bear the sceptre of the Universe, crowned with the Wheel of the Spirit. ARARITA!


Having drawn the proper hexagram, he would proceed to an invocation of Jupiter. This example is modified slightly from Thomas Taylor's translation of the Orphic hymn to "Jove, as the Author of Lightning":


Having drawn the sigil of Jupiter, the magician would then declare Jupiter duly invoked.

Ruling planets of the Zodiac

[XXV is the Square of 5, the number of the Pentagram.]

Facing East, in the centre, draw deep deep deep thy breath, closing thy mouth with thy right forefinger prest against thy lower lip.  Then dashing down the hand with a great sweep back and out, expelling forcibly thy breath, cry:

APO PANTOS KAKO DIAMONOS.  [Away from me evil spirits.]

With the same forefinger touch thy forehead, and say SOI [To Thee],
thy member, and say O PHALLE [O Phallus. Women can say: O KTEIS.],
thy right shoulder, and say ISCHUROS [Strong, Power],
thy left shoulder, and say EUCHARISTOS [Thanksgiving];
then clasp thine hands, locking the fingers, and cry IAO.  [IAO is a Notariqon of the Qabalistic God Name of Tiphareth, the Sun, and it is the Gnostic Tetragrammaton.]
Advance to the East.   Imagine strongly a Pentagram [The color of the Pentagram should be the Red of Geburah], aright, in thy forehead.
Drawing the hands to the eyes, fling it forth, making the sign of Horus, and roar THERION. [Therion is the Beast 666, the Perfected Man.]

Retire thine hand in the sign of Hoor pa kraat.

Puella:  Repeat the Cross Qabalistic, as above, and end as thou didst begin.

The secret sense of these words is to be sought in the numeration thereof.
Puer:

Extend the arms in the form of a Tau [Cross], and say low but clear:

[Translation of the above Greek words is as follows: Before me the Spells (Iunges), Behind me the Mysteries (Teletarchai), On my right the Constraints (Sunoches), On my left the Spirits (Daimonos), For about me blazes the five-fold Star, and in the Stone, the Star of Six is fixed.]

In the centre, let him give the L.V.X. signs; or if he know them, if he will and dare do them, and can keep silent about them, the signs of N.O.X. being the signs of Puer, Vir, Puella, Mulier.
Omit the sign I.R.

Then let him advance to the East and make the Holy Hexagram, saying:
Pater et Mater unus deus Ararita. (Father and Mother are the one God ARARITA)

Let him go round to the South, make the Holy Hexagram and say:
Mater et Filius unus deus Ararita. (Mother and Son are the one God ARARITA)

Let him go round to the West, make the Holy Hexagram and say:
Filius at Filia unus deus Ararita. (Son and Daughter are the one God ARARITA)

Let him go round to the North, make the Holy Hexagram and then say:
Filia et Pater unus deus Ararita. (Daughter and Father are the one God ARARITA)

Let him then return to the Centre, and so to The Centre of All (making the Rosy Cross as he may know how) saying:
Ararita Ararita Ararita
(In this the Signs shall be those of Set Triumphant and of Baphomet. Also shall Set appear in the Circle. Let him drink of the Sacrament and let him communicate the same.)

Let him then repeat the signs of L.V.X. but not the signs of N.O.X.: for it is not he that shall arise in the Sign of Isis Rejoicing.


The "Holy Hexagram" is a reference to Chapter 69 in The Book of Lies:

The key to the understanding of this chapter is given in the number and the title, the former being intelligible to all nations who employ Arabic figures, the latter only to experts in deciphering English puns. what i find intriguing is how aleister's death was portrayed in the 2008 movie The Chemical Wedding (cd: the wet bald shirt thing). his severe coughs were caused by an internal infinite regress, as described in We See All, Work 015 of the Magicalbum: The Cough Fear ( ﻿﻿﻿﻿http://6.ly/fah ). aleister may have had a small bolesknee gd, but there was no trs provided. otherwise he would have survived his illness. the ts mascotte hpb (helena petrovna blavatsky), she too died by this same cough fear cause.

Permalink Reply by Leila Raven on February 7, 2011 at 1:46pm
Interesting, I'd be curious to know more about that, the link you give just goes to an index page image. Do you have any other info or source I could peek at? If not I'll just go googling away.  Thanks. :)

i'm so sorry i see this comment now. i was so busy with twitter, my own website catsociety and my work as teacher. i'll gladly answer your question: the image you refer to is an excerpt from the ma, the thema, the theme which is the magicalbum which is the only theme the world, humanity is all about....

since it is a book of secrets, the book is not openly obtainable as pdf, nor available as a copy that can be bought. it is given as livelong gift to those who join the society of the cat people, the secret order i am with. there are a limited amount of pages made public though, which are: http://www.mslog.nl/promolinks.html

more about the book is here: http://www.catsociety.nl/esa/viewtopic.php?t=44 it is in dutch, but via 'google translate' you can translate it into english - but beware of interpretation flaws!

meanings of words, idioms derived from the magicalbum that are disclosed for public are in this 'dictionary': http://www.catsociety.nl/esa/viewtopic.php?t=40

some information about 'what are cat people' is here: http://www.catsociety.nl/esa/viewtopic.php?t=89

hoping to have answered your question properly,

always glad to help! i would like to start a topic in the forum section, would that be welcomed? i'm new here, so i don't know if such action will be appreciated?

These are VERY beneficial in ceremonial magick.

93 Rodney. I d the Banishing every evening. Blessings!