Text Versions of Sacred Images Part 1 of 2  By Manly P. Hall: A number of years ago, I was in a little town, Darjeeling, on the northern boundary of India where it met Tibet. There were several visitors from various countries and the hotel management decided it would be appropriate to give a little entertainment in the Tibetan spirit. So they brought in about a half a dozen Tibetan dancers, with their masks and regalia, to entertain. Among them was a little boy, about eight years old, a very cute chubby little rascal that everyone liked immediately.

But when the time for the dance came, he put on one of the most grotesque mask you'd ever want to see. He really looked like a 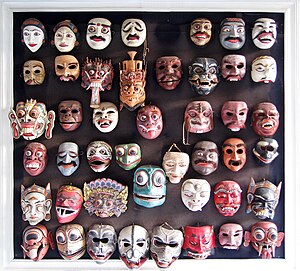 nightmare. Of course, everyone knew it was the little boy.

But during the dance, he started moving over rapidly towards the audience and always getting ready to attack them. You should have seen the audience scatter. They all knew it was the little boy but with the mask, something happened.

The evil spirits of ancient and primary fear moved in on those people. They actually subconsciously were terrified.

On another occasion, I remember in the Japanese Noh drama where the principal actors are masked, many of the themes are highly sacred. In the various performances, the actors are nearly always concealed behind these wood-carved masks that are well-painted and decorated but of course, have no expression except that of the original carving.

But under a careful handling of light, particularly by the postures of the head in relationship to the source of light, these faces seem to change. And in moments of joy, the face really seemed to smile and in sorrow, the face looked very tragic. Yet it was done with a wooden mask but everyone felt it. The skill in which the mask was handled was the principal factor.

In the southwest United States, we have a series of ritualistic dances by the various Indian tribes, the Zuñis, Hopis, Navajos. These dances often included masked figures and everyone knows that these masked figures are membersof the local community.

One of the men with the mask, very carefully developed but rather crude mask, actually has two children in the audience. They all know that it's father but when he dances toward them with the sacred column, they kneel instinctively as though he was a god. Something happens when the masks begin to take a part in religious rituals.

Masks were used in Egypt, we know, in the temple mysteries. Even today, the various carvings and manuscripts of Egyptian origin show human beings with the masks of birds and animals. The Greeks used masks in their theater also. Nearly always a mask becomes a complete change of personality.

If accompanied by adequate religious ritual, the mask becomes the secret of the development of a peculiar theological belief that there was a divine power in the mask. And when it was worn correctly and under ritual supervision, it brought a deity into contact with humanity.

On the course of time, the mask, of course, has gradually faded but in many primitive countries, they still survive. Then came another step forward in the study of human psychology. It is almost impossible for the average person to understand a completely abstract principle. It is very hard to visualize something that has no form or to visualize an energy which is completely unembodied.

From very early times, it became apparently necessary to present nearly all of the important truths of life symbolically. We have 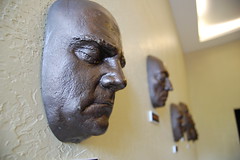 wonderful symbolic books, like Aesop's Fables or Pilgrim's Progress. We have very wonderful ancient sculpturing and statuary, paintings, carvings of all kinds, retablos and icons which are presumed to have certain sacred value in themselves.

You can go from one end of the world to the other among middle class group of people, the average person, and you ask them if they believe that these statues are actually divine or have spiritual power in themselves. Nearly everyone will answer no.

Even in the midst of a vast array of this imagery, nearly everyone accepts the fact that it is symbolical and that it represents something that cannot be directly seen. It represents a power in nature which is in itself invisible.

The idea of this type of symbolism apparently arose from man's study of his own environment.

It gradually dawned upon him that pure life, in its own essence, is invisible. We know it is present because of what it does but we do not know what it is. Therefore, when we begin to study life, we have to do it by examining living things. We are not able to understand the substance of energy or vitality or force but we are able to estimate its consequences.

Therefore, as we look around these in nature, we see an infinite diversity of living things, all of these living things supported by one essential, basic life principle. 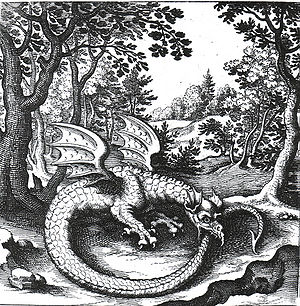 It is represented by mathematical formulas and astronomical observations and it is represented by now a very complex group of chemical and electronic symbols. And yet underneath all of this vast array of symbolism, it is obvious that there is one invisible life principle.

This principle separated from all living things is almost impossible to define. The only way we can define it is to reveal it through its own works.

Our ancient forebears were certain that all creation was a revelation of one principle. Therefore, in order to make a diagram or a picture of this principle, something had to be found that could be equated with everything that exists.

This symbol had to be inclusive enough to reveal the utter diversity of the divine power and yet at the same time sufficiently integrate it to realize or to represent the fact that this divine power was in the ultimate one, an indivisible principle manifesting constantly through utter diversity.

It therefore seemed quite proper to select various symbols to represent this one indivisible but invisible unity at the source of existence. The Greeks have their pantheons of gods, so did the Egyptians and the Latins, the Hindus and the vast mass.