Does anyone remember what it was like being a secretary in the 60's - 70's?  We typed on manual typewriters, or electric that were so touchy, if you weren't careful, you'd get a row of sssssssssssssss, or pppppppppppppp.  We took shorthand, no dictophones or recording here.  We typed them up, with carbon paper for multiple copies, or used a mimeograph.  We filed by hand, answered phones and directed calls all without the aid of a computer message.

I worked for Cooperative Extension, 4H.  I was responsible for getting the monthly magazine out, and notices.  Plus, the occasional letter.  I'd use a Fisch to trace my bosses signature.  I also subbed for the receptionist when she went on her break.

Unlike the other systems mentioned, except Pitman's, this is both a handwriting and shorthand system. It contains symbols for all the consonants and vowels needed to write English phonetically, and so when words are written in full, the writing is unambiguously readable. Simple strokes, very much like those in Gregg Shorthand, are used, so the system is cursive and fast. In fact, most of the symbols used for the consonants are the same as used in Gregg Shorthand. The main difference is that enough symbols have been added to represent all necessary vowel sounds. In this it is like Pitman's system, but without dependence on position relative to lines, strokes of different width, or use of diacritical marks

A History of the Mimeograph

If you attended school between the 1950s and the 1970s, you must remember those moments when the teacher distributed copies of tests or work sheets. Where I grew up we called such copies "dittos." Churned out by a mimeograph, fresh dittos were damp and limp with a heady gluelike aroma and distinct purplish ink.

Thomas Edison is credited with inventing the first mimeograph copying system. But the true precursor of the technology I knew in grade school (and that businesses used for much of the 20th century) came from Alfred Blake Dick. Dick, whose company licensed Edison’s technology, invented the mimeo stencil and marketed the first commercial mimeograph in 1887. Once text is cut (or typed) into the stencil, the stencil is wrapped and fastened around a cylinder. Rotating the cylinder forces ink through the stencil and onto individual sheets of paper served up from a tray.

Kathleen Roberts of Raynham, Mass., used the gamut of copying technology during her 47-year teaching career, from carbon paper in 1937 to a hand-cranked mimeograph by the 1950s, to a stain- and odor-free copier when she retired in 1982. Pouring ink into the mimeograph "was like taking a bath," Roberts recalls. But the machine was a real time-saver, so purple hands were just part of the job.

The advent of inexpensive copiers killed the mimeograph. That’s too bad. While photocopies, webpages and e-mail are efficient ways to distribute learning materials, I doubt they’ll prove as evocative of childhood as the lowly mimeograph and its pungent dittos. 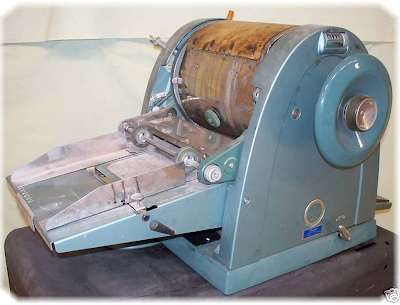 by the way, the shorthand say:  the quick brown fox jumped over the lazy dog.

That sentence was used for everything.