The Tibetan Book of the Dead and the Left-Hand Path

“The Bardo Thodol is in the highest degree psychological in its outlook”. — Carl Jung 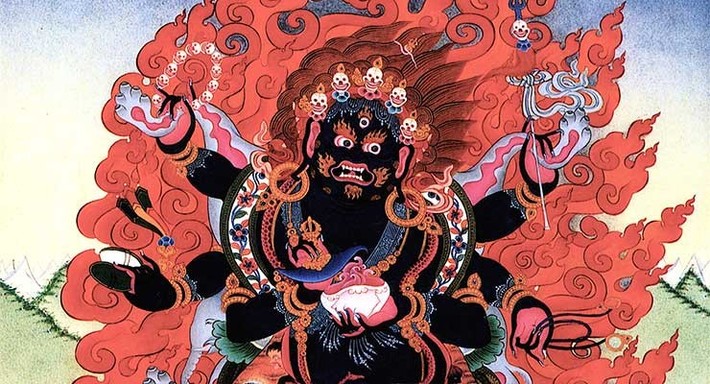 Recited at the bedside of the dearly departed, the Tibetan Book of the Dead is an ancient guide for the soul as it transcends distinct phases (or bardos) between death and rebirth. Though composed for the dead, the Bardo Thodol, as it was originally called, also has lessons for the living. Tibetans believe that it can potentially offer enlightenment to anyone who hears its words, which is why many use it as a tool to come into contact with one’s own essential nature.

The Bardo Thodol, which means “liberation through understanding”, was composed in the 8th century by Buddhist prophet Padmasambhava, and was eventually published as The Tibetan Book of the Dead in 1927 by Oxford University Press. The American anthropologist and writer Walter Evans-Wentz coined the title because of the parallels he found with the writings in The Egyptian Book of the Dead. With the multiple instructions derived from the book, we can see how it has had a direct influence on the minds of the living. Its ultimate goal is to provide a means by which the practitioner can cultivate an unwavering recognition of the nature of wrathful deities, or demons, within his or her own mind, bringing about a liberating transformation of character and a “rebirth” of personality. These after-death states of consciousness are said to consist of various Tibetan gods and demons. The deities appear to be “real” within the after-death experience, but the text instructs the disembodied consciousness to regard them as merely dream-like visions, reflections of its own inner-self. The gods and demons are therefore viewed as metaphors, expressive of the disembodied consciousness of basic psychic tendencies. Thus, The Tibetan Book of the Dead is a psychological document that characterizes basic personality traits and presents the principles of those traits in a symbolic, yet realistic, manner.

On the left-hand path, that personal path of self-overcoming, one must face one’s own demons while delving into the depths of the subconscious. The individual must realize, though, as in the case of the disembodied consciousness of the Tibetan dead, that the demons are phantoms, metaphorical manifestations created in the personal unconscious. Though personal, these demons may share attributes with archetypes in the collective unconscious, thus seeming familiar to all.

Even when the initiate upon the Path misconstrues the meaning of the word “adversary”, thinking it gives them the right to be a contemptible prick, what one should truly be adversarial to are those “demons” that block your path, that bar you from reaching that stage of spiritual/psychological “rebirth”. But not all demons are deleterious. This is what separates the right-hand path from the left. On the LHP we utilize the demonic when it leads to personal exaltation, while on the RHP all that is deemed “dark” is shunned.

The Tibetan Book for the Dead is a psychological document that characterizes basic personality styles and presents the principles of those personalities in a symbolic and condensed manner. Like the demons and dark deities in the Book, those encountered on the left-hand path are also statements of the psyche, and are therefore psychological. A mind that fails to overcome these weaknesses (demons), however, will be destroyed by them. Liberation is still possible, though, simply by recognizing these beings for what they are. Yet the act is also more difficult now because terror forces the mind to flee rather than to examine its experiences, thus not allowing one to progress, or transcend. And transcending your personal “bardos” should be the objective of all upon the Path.

The Archangel Michael vs. Satan

My argument against Flat Earthers