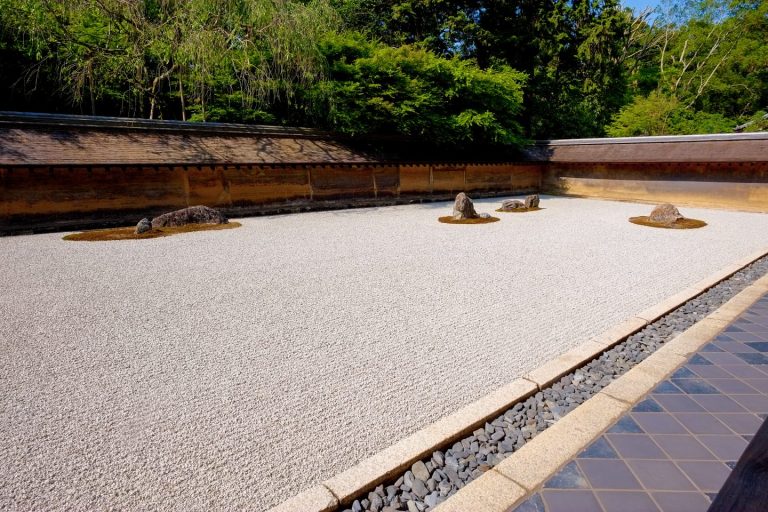 The less is more aesthetic of Zen gardens has fascinated the Western and Eastern traveler, alike, but deeper research into Kyoto’s Ryoanji Temple, famous for one of its rock gardens consisting of a mere 15 rocks spread across a rectangular pit of shallow gravel, offers a compelling new reason to visit it.

Interested in understanding why so many tourists were compelled to visit the rock garden, researchers began to measure the site from a mathematical perspective.

What they uncovered is mind-boggling considering that the placement of the rocks in the garden harkens to the 15th century, well before the Mandelbrot set and fractal geometry was likely understood by the occupants of any imperial palace – with the exception of those who practiced deep meditation, for example, and understood Divine Intelligence in ways that mathematicians are just now sorting out.

The researchers used a technique defined as medial-axis transformation to discover that the rock clusters were formed into a fractal pattern – thought to be the secret to divine geometry, and the underlying foundation of all creation.

The axes of symmetry between the rock clusters formed the fractal contour of a tree – which is also based on divine geometry. (Leonardo Da Vinci’s explanation of the fractal tree design also describes why they don’t splinter, even as a tree sprouts new branches. A tree almost always grows so that the total thickness of the branches at a particular height is equal to the thickness of the trunk.)

When the rocks were rearranged in computer simulations, that tree-like structure and its meditative effect were lost. “The people who built the temple didn’t know about fractals,” says Esther Sternberg, “But they understood at some unconscious level that placing the rocks in that way made people feel calm.”

The reason the rock rearrangement caused it to lose its meditative effect, can also reasonably explain why most man-made objects add to our stress, instead of reassure peace. Most design is not centered on divine geometry or medial-axis transformation, unless you look at the highly elevated building and archeological design of ancient temples of advanced civilizations – many of which are just starting to reveal their secrets of consciousness-transformation to modern scientists.

You might say that the very same blueprints which determine how a snowflake or seashell are formed by a Higher Intelligence were reiterated in the installation of a Zen rock garden at Ryoanji. If we are all also part of the intelligence of the Prime Creator, this would explain why the temple is one of the most visited, and the rock gardens cause a gravitational pull.

The diffusion of Mandelbrot’s discovery since the 1970s should not prescribe the use of sacred geometry before Mandelbrot noticed the phenomenon and gave it his name. Hindu temples dated back more than 5000 years are replete with fractal geometry.

Fractals are generally self-similar on multiple scales. So, all fractals have a built-in form of recursion. Sometimes the recursion is visible in how the fractal is constructed. Other times, as in the case of a few rocks, the recursion is not apparent. The affect, nonetheless is the same.

If 15 rocks spread across some sand in Kyoto, Japan can have such a profoundly positive affect on those who observe the, what might an entire city do to its inhabitants when built upon this scientific, geometric premise?

Hindu, Buddhist, South and Central American and even Egyptian temples have been studied as divinely geometrical creations – modeling a fractal universe. The placement of these temples on specific locations across the globe, are also of great significance.

The placement of objects in our world has a profound effect on us. We can either ignore the power of divine geometry – the building blocks of nature – or work in concert with this Great Intelligence to affect human life accordingly.

I would love to see a city built upon this premise, or even a neighborhood, just to see what effects it has on the inhabitants. Would their stress levels be less? How would it affect their mental state, as in less depression and anxiety? Would their overall health be better than the average person? How would it affect the crime rate in that area? Or social interaction and community relations? Or business? Gives you something to think about.