Unlocking the Secret of Bhagavad-gita

BG 18.64: Because you are My very dear friend, I am speaking to you My supreme instruction, the most confidential knowledge of all. Hear this from Me, for it is for your benefit.

“You have the highest conception of the pastimes of Rādhā and Kṛṣṇa,” Lord Caitanya continued. “Therefore you are seeing Rādhā-Kṛṣṇa everywhere.”

BG 18.66: Abandon all varieties of religion and just surrender unto Me. I shall deliver you from all sinful reactions. Do not fear.

Rāmānanda Rāya replied: “I request that You not try to hide Yourself. I understand that You have accepted the complexion and mode of thinking of Śrīmatī Rādhārāṇī and that You are trying to understand Yourself from the viewpoint of Rādhārāṇī. You have actually advented Yourself to take this point of view. Although You incarnate mainly to understand Your own self, You are at the same time distributing love of Kṛṣṇa to the world. Now You have personally come here to deliver me. Please don’t try to deceive me, I beg You. It is not good for You.”

BG 18.67: This confidential knowledge may never be explained to those who are not austere, or devoted, or engaged in devotional service, nor to one who is envious of Me.

Being very satisfied, Lord Caitanya smiled and showed Rāmānanda His real form as the combination of Śrī Rādhā and Kṛṣṇa. Thus Lord Caitanya was Śrī Kṛṣṇa Himself with the external features of Śrīmatī Rādhārāṇī. His transcendental ability to become two and then to become one again was revealed to Rāmānanda Rāya. Those who are fortunate enough to understand Lord Caitanya as well as the Vṛndāvana pastimes of Rādhā and Kṛṣṇa can be able, by the mercy of Śrī Rūpa Gosvāmī, to know about the real identity of Śrī Kṛṣṇa Caitanya Mahāprabhu.

BG 18.68: For one who explains this supreme secret to the devotees, pure devotional service is guaranteed, and at the end he will come back to Me.

Upon seeing this unique feature of Lord Caitanya, Rāmānanda Rāya fainted and fell on the floor. Lord Caitanya then touched him, and he came to his senses. Rāmānanda Rāya was then surprised to see Lord Caitanya again in His mendicant dress. Lord Caitanya embraced and pacified him and informed him that he was the only one to have seen this form. “Because you have understood the purpose of My incarnation, you are privileged to have seen this particular feature of My personality,” the Lord said. “My dear Rāmānanda, I am not a different person with a fair complexion known as Gaurapuruṣa. I am the selfsame Kṛṣṇa the son of Mahārāja Nanda, and due to contact with the body of Śrīmatī Rādhārāṇī I have now assumed this form. Śrīmatī Rādhārāṇī does not touch anyone but Kṛṣṇa; therefore She has influenced Me with Her complexion, mind and words. In this way I am just trying to understand the transcendental flavor of Her relationship with Kṛṣṇa.”

BG 18.72: O son of Pṛthā, O conqueror of wealth, have you heard this with an attentive mind? And are your ignorance and illusions now dispelled?


BG 18.73: Arjuna said: My dear Kṛṣṇa, O infallible one, my illusion is now gone. I have regained my memory by Your mercy. I am now firm and free from doubt and am prepared to act according to Your instructions.

“Please rest assured that I have nothing to hide from you,” Lord Caitanya told Rāmānanda. “Even if I do try to hide from you, you are such an advanced devotee that you can understand all My secrets. I request that you please keep this a secret and do not disclose it to anyone. If it were revealed, everyone would consider Me a madman. The facts which I have disclosed to you cannot be understood by materialistic people. When they hear of this, they will simply laugh at Me. You can understand this yourself and keep it to yourself. From a materialistic point of view, a devotee becomes mad in his ecstasy of love for Kṛṣṇa. Both you and I are just like madmen. So please don’t disclose these facts to ordinary men. If you do, they will surely laugh at Me.”

BG 18.75: By the mercy of Vyāsa, I have heard these most confidential talks directly from the master of all mysticism, Kṛṣṇa, who was speaking personally to Arjuna.


Lord Caitanya then passed ten nights with Rāmānanda Rāya, enjoyed his company and discussed the pastimes of Kṛṣṇa and Rādhā. The discussions between them were on the highest level of love for Kṛṣṇa. Some of these talks are described, but most of them could not be described. In Caitanya-caritāmṛta this has been compared to metallurgic examination. The metals compared are discussed in the following sequence: first copper, then bronze, then silver, gold and at last touchstone. The preliminary discussions between Lord Caitanya and Rāmānanda Rāya are considered to be like copper, and the higher discussions are considered to be like gold. The fifth dimension of their discussions, however, is considered to be like touchstone. If one is eager to attain the highest understanding, he must begin with an inquiry into the differences between copper and bronze, then silver and gold and so on.

BG 18.76: O King, as I repeatedly recall this wondrous and holy dialogue between Kṛṣṇa and Arjuna, I take pleasure, being thrilled at every moment.


The next day Lord Caitanya asked Rāmānanda Rāya to allow Him to return to Jagannātha Purī. “We can remain together the rest of our lives at Jagannātha Purī and pass our time in discussing Kṛṣṇa.” Lord Caitanya then embraced Rāmānanda Rāya and sent him to his own place. In the morning the Lord started on His journey. He met Rāmānanda Rāya at a temple of Hanumān on the river bank. After visiting the temple of Hanumān, He left. As long as Caitanya Mahāprabhu remained at Karpūra, all kinds of people met Him, and by His grace everyone became a devotee of the Supreme Lord.

BG 18.77: O King, as I remember the wonderful form of Lord Kṛṣṇa, I am struck with wonder more and more, and I rejoice again and again.


After Lord Caitanya’s departure, Rāmānanda Rāya became overwhelmed due to his separation from the Lord, and he immediately decided to retire from service and meet the Lord again at Jagannātha Purī. The discussions between Rāmānanda Rāya and Lord Caitanya deal with the most concentrated form of devotional service. By hearing these discussions one can understand the pastimes of Śrī Rādhā and Kṛṣṇa as well as the confidential role played by Lord Caitanya. If one is actually fortunate enough to have faith in these discussions, he can enter into the transcendental association of Rādhā and Kṛṣṇa.

BG 18.78: Wherever there is Kṛṣṇa, the master of all mystics, and wherever there is Arjuna, the supreme archer, there will also certainly be opulence, victory, extraordinary power, and morality. That is my opinion. 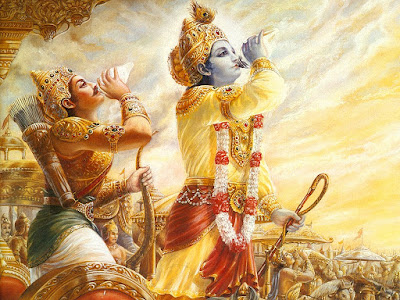 This is wonderful! I hope you may also share this in our Buddhism group!!! Please? Blessings and an amazing and moving discussion! Thank you! Thank you so much, Rosey for the acknowledgment. Krishna Chaitanya is pleased with your appreciation. Love always.