In an effort to help students who struggle to pay for food Bon Jovi and wife Dorothea Hurley will open the newest outlet of JBJ Soul Kitchen on the Rutgers University campus. 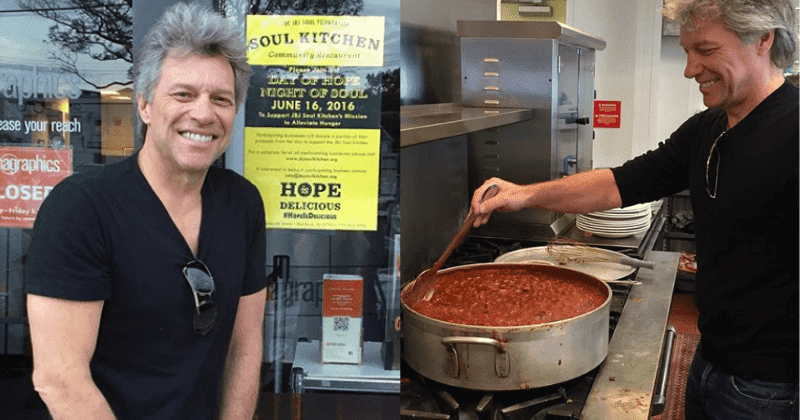 Jon Bon Jovi may be best known for hits like It's My Life and Livin' on a Prayer, but he does more than kill it on a stage. Through his foundation JBJ Soul Kitchen, he is currently all set to open his third community restaurant, where those in need of a hot meal can access healthy and nutritious food without being worried about judgment. The restaurant will be located at the Rutgers University campus in New Jersey. In an interview with CBS News, Bon Jovi and his wife Dorothea Hurley revealed what their motivation behind JBJ Soul Kitchen was and how they first got involved.

"Hunger doesn't look like what your mind's eye might imagine," Hurley told CBS Sunday Morning host Tracy Smith. "It's the people at your church. It's the kids that go to school with your kids. And I think that was eye-opening for a lot of the community here that said, 'Oh, there's no homeless people here.'" For many people, homelessness is a social taboo that goes unaddressed far too often. However, by stigmatizing homelessness and poverty, we make it harder for those who are in need of resources to actually gain access to them.

Therefore, the couple opened their first JBJ Soul Kitchen in 2011 in Red Bank, New Jersey, with the intention of providing quality food to anyone from the community in need of a warm, filling, and nutritious meal. Unlike other restaurants, the menu at the JBJ Soul Kitchen does not list prices. Instead, diners have the choice to pay what they can, and in addition to that, are requested to pay it forward by paying for someone else's meal too. If they can't pay at all, they are asked to volunteer. Almost all of the labor — much like the meals and food — is donated.

Their newest Rutgers University outlet comes out of a need to feed students on campus who would otherwise struggle to pay for food. Bon Jovi stated, "We all think it's a rite of passage to study hard and eat ramen noodles. How about if it's the only thing you can afford?" But the couple does not plan on stopping there. They said that they'll keep opening outlets of JBJ Soul Kitchen as long as there's a need for it. While it may not be like performing on stage, there's a certain sense of fulfillment that comes along with this philanthropy. "It can obviously never compare to performing or writing songs," the rockstar stated. "But what it does do is it gives you the same sense of fulfillment, I think, when I leave here at night and you see the lives you touch. I have left here, you know, after a long night of volunteering and said, 'That makes you feel the same kind of good.' You know? And that's what I say, the way to feel good is to do good, you know? Find your good and do it."

You are welcome, Rosey!

I thought it was not only interesting but worthy of sharing what he is doing...

Thanks, Carmen. The royalties from "Bad Medicine" helped fund a program that is anything but.

Permalink Reply by MARGARIDA MARIA MADRUGA on January 6, 2021 at 4:27pm

What good thing. It would be so nice if nobody went hungry ...
Is there anything worse?