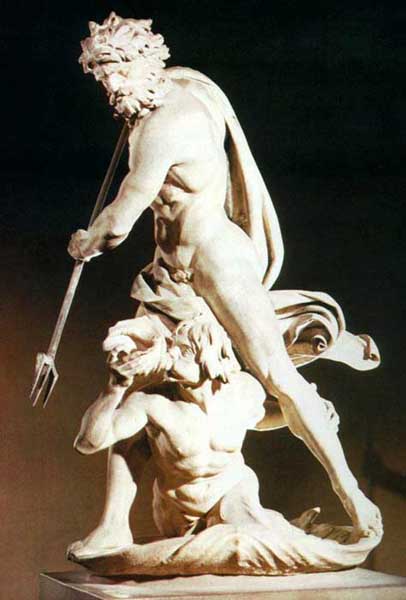 Neptune is the god of the sea in Roman mythology, a brother of Jupiter and Pluto. He is analogous but not identical to the god Poseidon of Greek mythology. The Roman conception of Neptune owed a great deal to the Etruscan god Nethuns. Originally he was an Italic god paired with Salacia, possibly the goddess of the salt water. At an early date (399 BC) he was identified with Poseidon, when the Sibylline books ordered a lectisternium in his honour (Livy v. 13).

In earlier times it was the god Portunes or Fortunus who was thanked for naval victories, but Neptune supplanted him in this role by at least the first century BC, when Sextus Pompeius called himself "son of Neptune".

Neptune was associated as well with fresh water, as opposed to Oceanus, god of the world-ocean.

Like Poseidon, Neptune was also worshipped by the Romans as a god of horses, under the name Neptune Equester, patron of horse-racing.

Neptune was also considered the legendary progenitor god of a Latin stock, the Faliscans - ancient Italian people - who called themselves Neptunia proles. In this respect he was the equivalent of Mars, Janus, Saturn and even Jupiter among Latin tribes.

In the historical period, Poseidon was often referred to by the epithets Enosichthon, Seischthon and Ennosigaios, all meaning "earth-shaker" and referring to his role in causing earthquakes.Poseidon was a major civic god of several cities: in Athens, he was second only to Athena in importance; while in Corinth and many cities of Magna Graecia he was the chief god of the polis.

According to Pausanias, Poseidon was one of the caretakers of the Oracle at Delphi before Olympian Apollo took it over. Apollo and Poseidon worked closely in many realms: in colonization, for example, Apollo provided the authorization to go out and settle from Delphi, while Poseidon watched over the colonists on their way, and provided the lustral water for the foundation-sacrifice. Xenophon's Anabasis describes a groups of Spartan soldiers singing Poseidon a paean - a kind of hymn normally sung for Apollo.

Like Dionysus and the Maenads, Poseidon also caused certain forms of mental disturbance. One Hippocratic text says that he was blamed for certain types of epilepsy. Sailors prayed to Poseidon for a safe voyage, sometimes drowning horses as a sacrifice.

In art Poseidon's chariot was pulled by a hippocampus or seahorses. He was associated with dolphins and three-pronged fish spears (tridents). He lived in a palace on the ocean floor, made of coral and gems.

In Rome Neptune was worshipped by the Romans primarily as a horse god, Neptune Equester, patron of horse-racing. He had a temple near the race tracks in Rome (built in 25 BC), the Circus Flaminius, as well as one in the Campus Martius. Only July 23, the Neptunalia was observed at the latter temple. 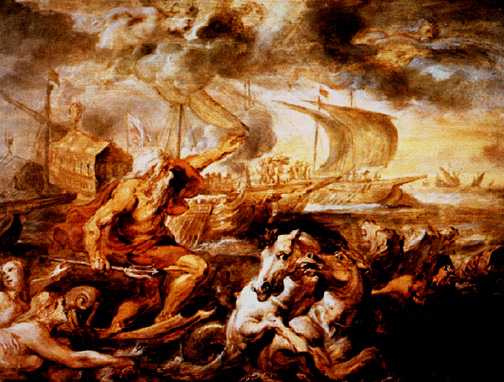 Birth and childhood - Poseidon was a son of Cronus and Rhea. Like his brothers and sisters save Zeus, Poseidon was swallowed by his father. He was regurgitated only after Zeus forced Cronus to vomit up the infants he had eaten. Zeus and his brothers and sisters, along with the Hecatonchires, Gigantes and Cyclopes overthrew Cronus and the other Titans. According to other variants, Poseidon was raised by the Telchines on Rhodes, just as Zeus was raised by the Korybantes on Crete. When the world was divided in three, Zeus received the earth and sky, Hades the underworld and Poseidon the sea.

Neptune's wife was Amphitrite, daughter of Nereus and Doris.

Poseidon fell in love with Pelops, a beautiful youth, son of Tantalus. He took Pelops up to Olympus and made him his lover, even before Zeus did the same with Ganymede. To thank Pelops for his love, Poseidon later gave him a winged chariot, to use in the race against Oenomaus for the hand of Hippodamia.

Poseidon once pursued Demeter. She spurned his advances, turning herself into a mare so that she could hide in a flock of horses; he saw through the deception and became a stallion and captured her. Their child was a horse, Arion, which was capable of human speech.

Poseidon had an affair with Alope, his granddaughter through Cercyon, begetting Hippothoon. Cercyon had his daughter buried alive but Poseidon turned her into the spring, Alope, near Eleusis.

Poseidon rescued Amymone from a lecherous satyr and then fathered a child, Nauplius, by her.

A mortal woman named Tyro was married to Cretheus (with whom she had one son, Aeson) but loved Enipeus, a river god. She pursued Enipeus, who refused her advances.

One day, Poseidon, filled with lust for Tyro, disguised himself as Enipeus and from their union was born Pelias and Neleus, twin boys.

With Medusa, Poseidon had sexual intercourse on the floor of a temple to Athena. Medusa was changed into a monster.

When she was later beheaded by the hero Perseus, Chrysaor and Pegasus emerged from her neck.

After raping Caeneus, Poseidon fulfilled her request and changed her into a man.

Athena became the patron goddess of the city of Athens after a competition with Poseidon. They agreed that each would give the Athenians one gift and the Athenians would choose whichever gift they preferred.

Poseidon struck the ground with his trident and a spring sprung up; the water was salty and not very useful, whereas Athena offered them an olive tree.

The Athenians - or their king, Cecrops - accepted the olive tree and along with it Athena as their patron, for the olive tree brought wood, oil and food. This is thought to remember a clash between the inhabitants during Mycenaean times and newer immigrants.

It is interesting to note that Athens at its height was a significant sea power, at one point defeating the Persian fleet at Salamis Island in a sea battle. Another version of the myth says that Poseidon gave horses to Athens.

Poseidon and Apollo, having offended Zeus, were sent to serve King Laomedon. He had them build huge walls around the city and promised to reward them well, a promise he then refused to fulfill. In vengeance, before the Trojan War, Poseidon sent a sea monster to attack Troy (It was later killed by Heracles).

In the Iliad Poseidon favors the Greeks, and on several occasion takes an active part in the battle against the Trojan forces. However, in Book XX he rescues Aeneas after the Trojan prince is laid low by Achilles.

In the Odyssey, Poseidon is notable for his hatred of Odysseus due to the latter's having blinded the god's son Polyphemus. The enmity of Poseidon prevents Odysseus' return home to Ithaca for many years. Odysseus is even told, notwithstanding his ultimate safe return, that to placate the wrath of Poseidon will require one more voyage on his part.

In the Aeneid, Neptune is still resentful of the wandering Trojans, but is not as vindictive as Juno, and in Book I he rescues the Trojan fleet from the goddess's attempts to wreck it, although his primary motivation for doing this is his annoyance at Juno's having intruded into his domain. 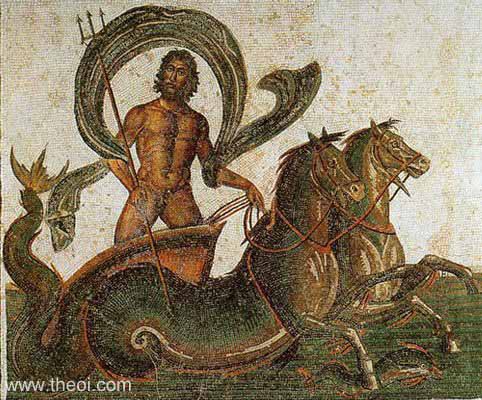 The Neptunalia was the festival of Neptune on July 23, at the height of summer. The date and the construction of tree-branch shelters suggest a primitive role for Neptune as god of water sources in the summer's drought and heat.

The most ancient Roman calendar set the feriae of Neptunus on July 23, two days after the Lucaria of July 19 and 21 and two days before the Furrinalia of July 25. G. Wissowa had already remarked that festivals falling in a range of three days are related to each other. Dumezil elaborated that these festivals were all in some way related to the importance of the function of water during the period of summer heat (canicula), when river and spring waters are at their lowest.

Founding his analysis on the works of Palladius and Columella Dumezil argues that while the Lucaria were devoted to the dressing of woods, clearing the undergrown bushes by cutting on the 19 and then by uprooting on the 21, (and burning them afterwards), the Neptunalia were spent in outings under branch huts (umbrae, casae frondeae), in a wood between the Tiber and the Via Salaria, drinking springwater and wine to escape the heat. It looks as though this festival was a time of general free and unrestrained merrymaking during which men and women mixed without the usual Roman traditional social constraints. This character of the festival as well as the fact that Neptune was offered the sacrifice of a bull would point to an agricultural fertility context.

The Furrinalia too, devoted to Furrina, a goddess of springs, were referred to those springs which had to be detected by drilling, i.e. required the work of man thence creating a correspondence with the Lucaria of 21, equally entailing an analogous human action upon the soil. The Furrinalia of July 25 are explained by Dumezil with the hydraulic works again as prescribed by Palladius, i.e. the drilling of wells to detect underground water: patent and hidden waters are thus dealt with on separate though next occasions. 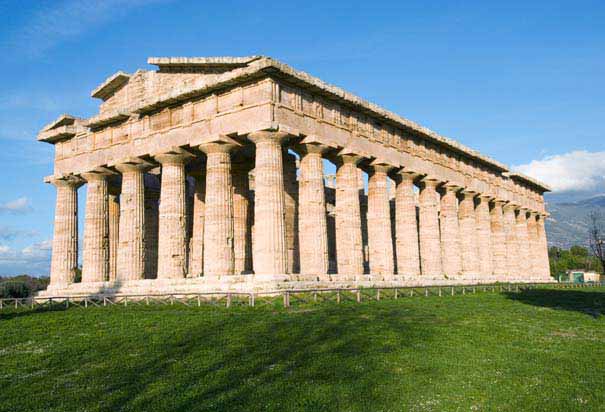 Neptune had two temples in Rome. The first, built in 25 BC, stood near the Circus Flaminius, the Roman racetrack, and contained a famous sculpture of a marine group by Scopas. The second, the Basilica Neptuni, was built on the Campus Martius and dedicated by Agrippa in honour of the naval victory of Actium.

The Renaissance brought with it a revival in pagan art, and many pagan gods were depicted in the same classical models used in Greek and Roman times. However, with Neptune few such models existed, allowing the artists of the Renaissance to depict Neptune however they chose. The results included a face and actions that seemed more mortal, as well as associations with Hercules. 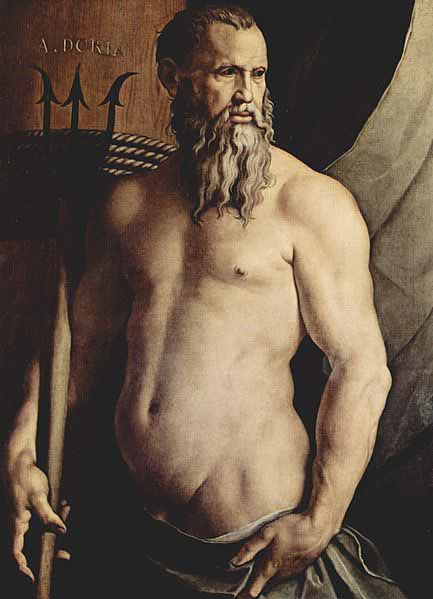 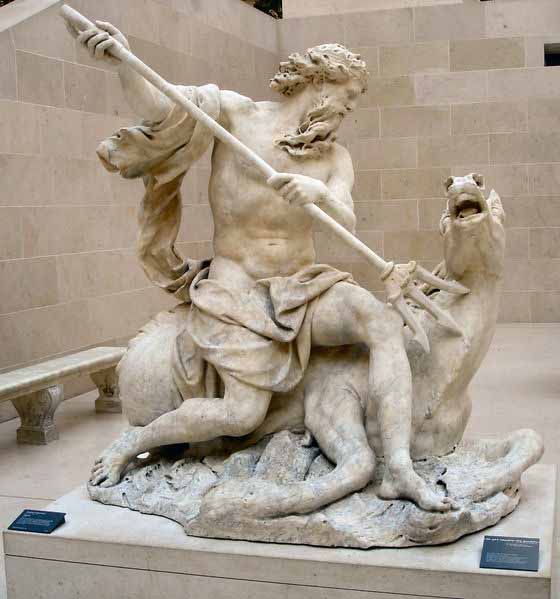 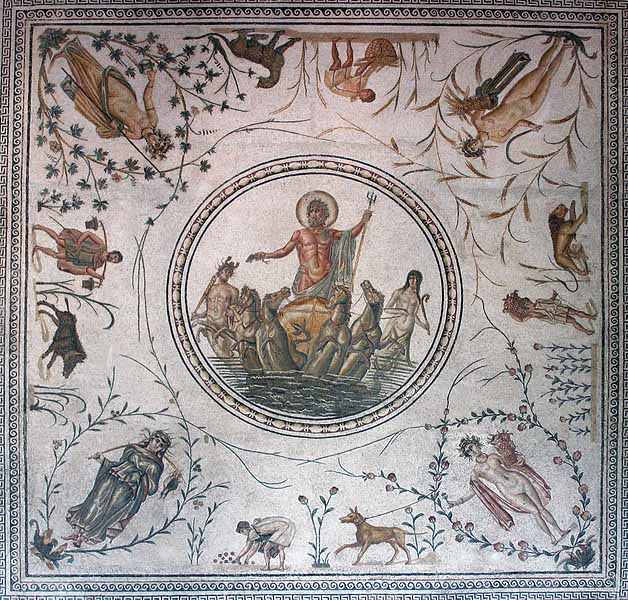