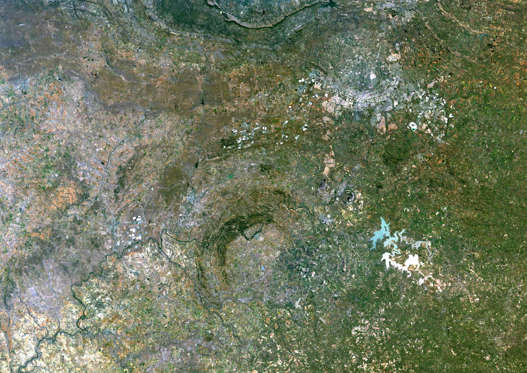 Located at the south-west of Johannesburg, the crater is believed to have been made by an asteroid impact on Earth some two billion years ago. With an estimated radius of 118 miles (190 km), the crater is reportedly the site of the largest energy release in the world. In 2005, it was declared a UNESCO World Heritage Site. 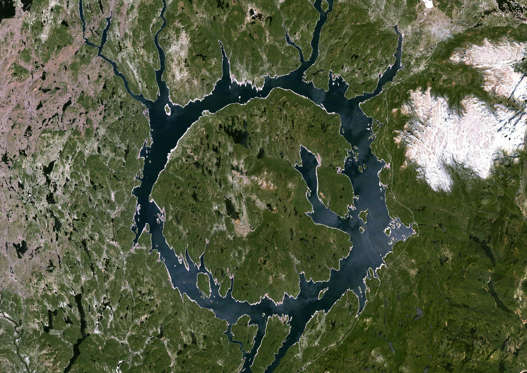 Lake Manicouagan is the remnant of an impact crater made approximately 212 million years ago. According to scientists, this 62 mile (100 km) wide crater was created after being hit by a 3.10 mile (5 km) asteroid. 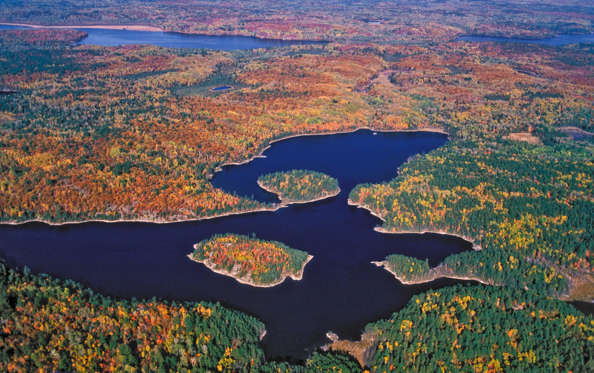 The second largest crater in the world was formed by the impact of a comet according to a 2014 study by researchers in Canada and Ireland. Colliding with Earth almost 1.85 billion years ago, the estimated diameter of the crater is 81 miles (130 km). 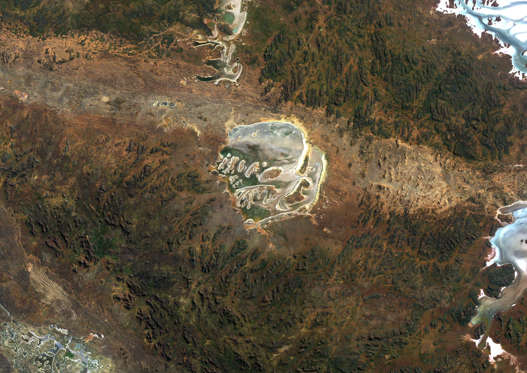 Spanning almost 56 miles (90 km), this crater was made by an asteroid impact some 580 million years ago. With time, the crater has been eroded but Lake Acraman, a dry lake, marks its location in South Australia. 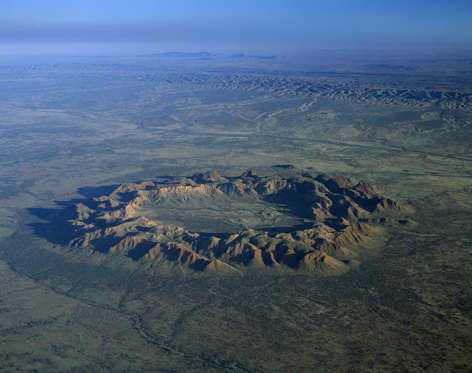 The crater was made by an impactor, an asteroid or comet, that was probably about 0.62 mile (1 km) in diameter that hit Earth about 142 million years ago. The ramparts are 820 feet (250 m) high and the 2.4 mile (4 km) wide inner crater represent the base of a rebound splash that formed far below the vaporization chamber and remained frozen in the subterranean strata until it was gradually revealed by erosion. 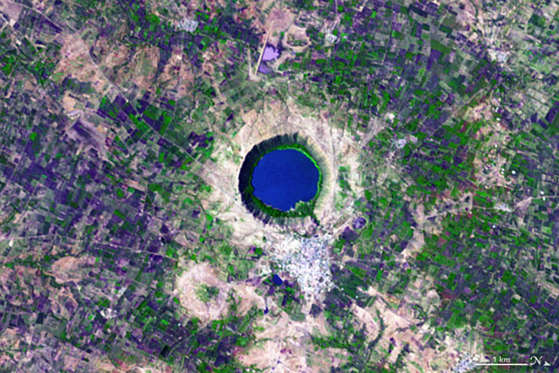 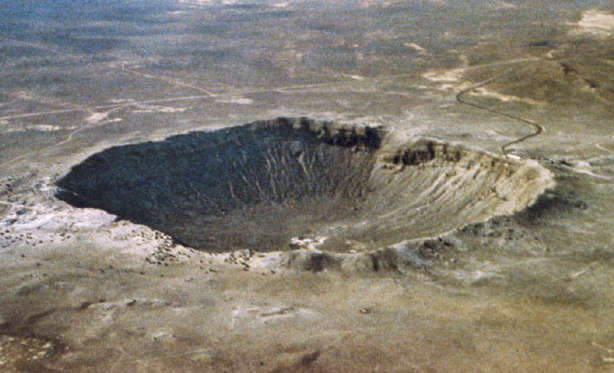 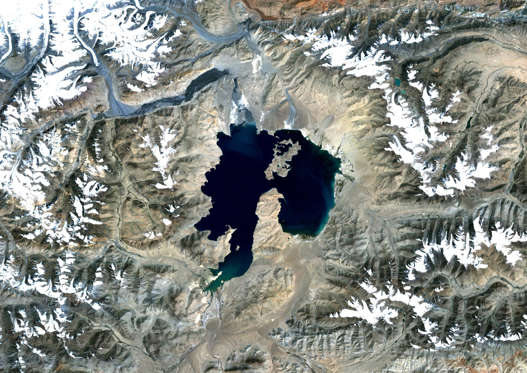 The highly eroded crater exposed in the Yugorsky Peninsula is believed to have been made by an asteroid impact some 70.3 million years ago. The 40 mile (64.3 km) wide crater is linked to the nearby Ust-Kara crater and many claim that the two were formed by a single impact, in which case they would form one of the largest craters on earth at 74.5 miles (120km). 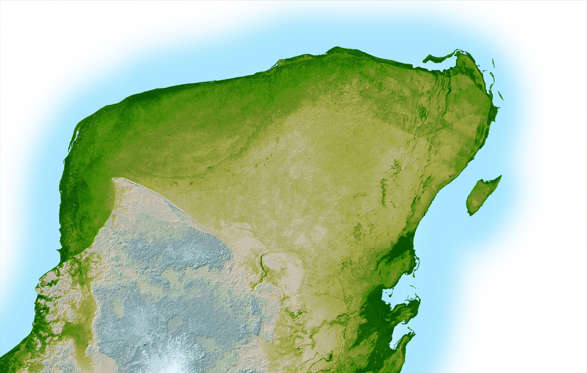 The crater was caused by a cataclysmic asteroid impact which, scientist theorize, may have caused the extinction of most life on Earth, including the dinosaurs, 65 million years ago. With a diameter ranging from 106 to a whopping 186 miles (170 to 300 km), if proved right could mean that the crater is the biggest on the planet.

(Pictured) In this NASA handout image released on March 7, 2003 showing the upper left portion of the Yucatan Peninsula, a faint arc of dark green is visible indicating the remnants of the crater. 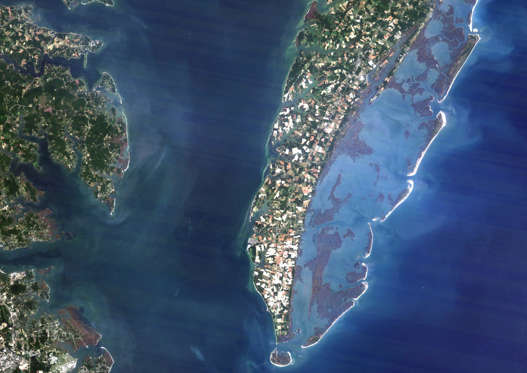 The arc of the western shoreline of Chesapeake Bay is believed to have been formed by a 53-mile-wide (85 km) marine crater, first discovered in the early 1980s. The crater reportedly developed by an asteroid impact some 35 million years ago.

(Pictured) Satellite image of the impact structure taken on Jan. 1, 2002. 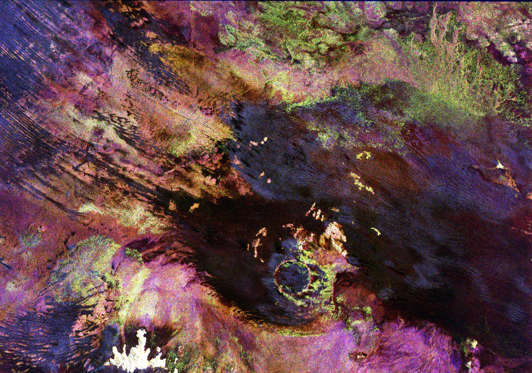 Located in southwest Namibia, the crater is thought to have been formed by a meteorite that collided with Earth approximately 5 million years ago. This 400 foot (130 meters) deep impact crater is 1.5 miles (2.5 km) wide whose rim stands out as a bright ring in the lower left of the image, which was taken by a radar instrument from space. 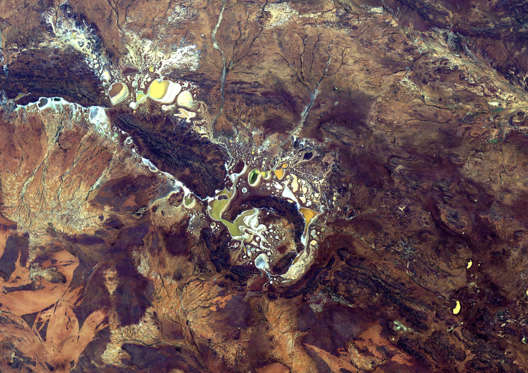 Resembling splotches of yellow and green paint, salt-encrusted seasonal lakes dot the floor of the impact structure which was formed about 1.7 billion years ago. It is currently the oldest known impact site down under. 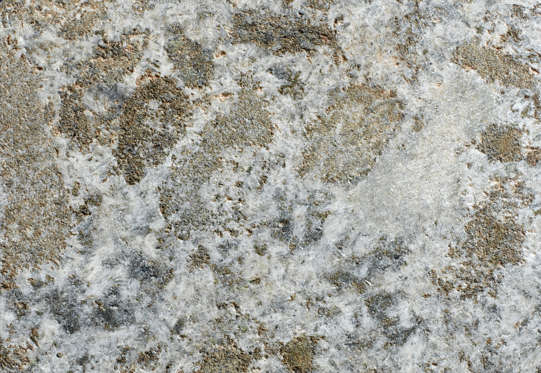 Located near the Kalahari Desert, this almost 43 mile (70 km) wide crater was formed by an asteroid hit some 145 million years ago. In 2006, geologists found a beach ball-sized fossil meteorite that survived the collision.

(Pictured) Sample of a large fragment of an asteroid that punched a wide hole on the Earth's surface. 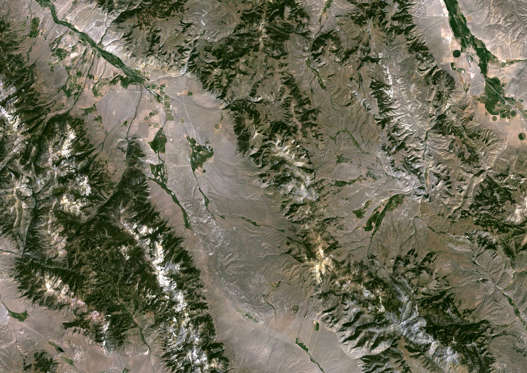 Located in central Idaho and western Montana, this 600-million-year-old crater is the second largest in the US. Few remnants remain visible today.