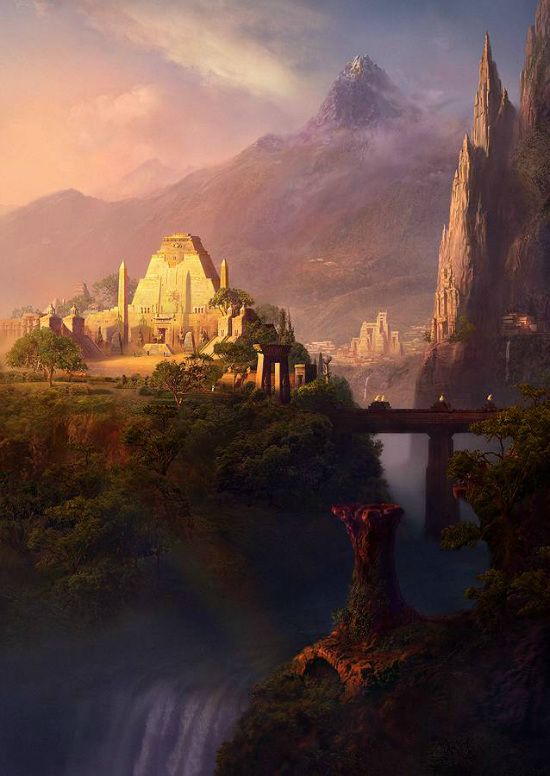 Stu asked me to talk more about my personal memories of Lemuria so thank you Stu. I talked a bit about this in the Introduction of A Lightworker’s Mission: The Journey Through Polarity Resolution, but will add more here.

The first thing I need you to understand about my personal memories of Lemuria is that it is a “past life” memory, but one that was on Earth (Lemuria) prior to when it became dense enough to be physical. In other words, my past life memories of Lemuria are from its creation point at a higher non-physical level and not a much later physical dense time that more people remember and can relate to. I remember being one of the involuting souls (intentionally moving away from Source to create and learn within its creations) who created sections of original Earth/Lemuria as it too involuted vibrationally. Things always start at higher non-physical levels first, and then spread out/down/in or wherever the creators intend.

My Lemurian past life memories started as a young child in this life, having an intense passion about water and being a creature that lived underwater in THE most beautiful place you can imagine. Sounds like a child’s fantasy doesn’t it? Some children’s “fantasies” are just like their “imaginary friends” that no one else can see or remember and are based on actual past life memories and inter-dimensional contacts and communications with non-physical beings/entities/ETs/Starbeings/Angelics/energies etc.

As a young child in this life I longed and ached for some ancient magical and much-loved place where I had been a creature that could live under the water. It was terribly frustrating as a child not being able to exist underwater like I remembered in this other place, time, and state of being. With time I remembered more about this pre-physical past life and these frustrations  dissipated. What I realized I remembered was my having been a non-physical being who—with many other non-physical beings just like me—were busily creating what would become Earth and the first non-physical landmass on it—the original Motherland (totally Goddess consciousness and energy and nothing else), the original etheric and very large continent of Lemuria. Over a very long time the Earth and Lemuria became increasingly dense vibrationally, to the point where they did become solid 3D objects within physicality but that was much, much later.

Now that you clearly understand that my memories are from the etheric and NOT yet physical phase of Earth/Lemuria, I’ll share what little bits and pieces I have remembered about it. I remember being a non-physical being—what much later might be called or thought of as a Merperson—who worked creating and building the waterways on etheric Earth/Lemuria. (This bit of information is for the astrologers who may be reading this. I have Pisces ASC and this I believe has been my soul sign or soul imprint during this long, creative journey away from Source. It is also why I was a natural at being able to create the water locations within original etheric Lemuria. Some of you reading this may have been the others who created and built the mountains, the trees, the rocks, the atmosphere and who have Fire, Earth, Air signs as your ASC.)

I remember having an intense passion to create the water and waterways for Lemuria. I remember building ethereal rivers, lakes, streams, grottos, and also working on parts of the Earth’s oceans. Most of my memories however where of creating waterways and water systems in the continent itself and not the vast oceans of the planet. Others did only that. I’ve remembered existing in non-physical water as this non-physical being during the creational etheric stage of manifesting Lemuria on what would become Earth, and also later living there myself as this Merperson (half water Elemental and half humanoid). This is hard to discuss, only because we’re talking about interdimensional beings who themselves had not as yet entered lower dense states of physicality. So my “body” during this so-called past life was a non-physical body existing within a not yet physical world and reality. It is just as “real”, just as legitimate, and even more important than some other past lives within dense 3D physicality I’ve had and remembered, and yet, many people would consider what I’m saying or claiming as sheer bullshit or delusional fantasy crap.

Just like on a large and complex physical construction site, there are plenty of professional construction workers who specialize in only what they do; laying foundations, plumbing, electrical lines, heating/cooling, framing, walls, flooring, lighting and so on. At higher dimensional non-physical levels the etheric creating and construction of Earth and its first to be inhabited continent Lemuria, was created in much the same way. We each built what we were ourselves, what we were highly specialized in, which allowed the construction site to be created by individuals who were the best for each layer, each section, each Element of the entire planetary project.

Eventually the whole etheric construction site was finished and ready for the first etheric  inhabitants to move in, and so we did. I remember this phase of my past life on etheric Lemuria and seeing the incredibly diverse lifeforms who were living there at that time. I remembered beings that were not humanoid at all but more like Elemental beings, different strange combination’s of Elemental and animal and humanoid, ET/Starbeings who hadn’t fully descended vibrationally enough at that point to take on a new energy matching form/body/environmental suit and so, they looked much like they did prior—they looked like etheric Starbeings and Lightbeings. It was a very long time at this etheric, not yet physical stage for Earth/Lemuria and it was beautiful beyond belief. It was the first Heaven on Earth and it was total Goddess-ness; all Goddess consciousness which means it was all Nature, all at-one-with Nature, each other and the planet. It was bliss, and yet, it was meant to eventually devolve energetically into a fully dense\ 3D physical planet and physical continent. I have vague memories of hundreds of thousands of years later, incarnating in a more dense and stable Earth/Lemurian body or environmental suit into a more dense and physical Lemuria , but not much can match my original memories and deep love for my life within the etheric layer of creating Lemuria’s waterways.

The whole planet and its now fractured continents is nothing similar to what the original Motherland of Lemuria looked like as it was huge. But, when I see images or maps on TV or online now of the “Ring of Fire” around the Pacific Ocean, that whole area and much more inland around it was the original Lemuria. Much, much, much later within the physical phase of Lemuria, groups of Lemurians began desiring more than what Goddess consciousness gave them. In other words, the involution and evolutionary progression was continuing and the first beginning manifestations of  polarity or polarization within physicality began with this Lemurian group separating themselves away from the original Lemuria Motherland and Goddess (and Nature) consciousness. Atlantians and Atlantis was born out of original Lemuria and they eventually began expressing the polar opposite consciousness and energies. They became the great scientists and intellectuals and were much more male-like energetically than the female-like Goddess consciousness and heart energies. I’m not saying better or worse or “good/bad” here, only involution further into density, creativity, polarization and learning within physicality on Earth. We’ve all most likely been both Lemurians and Atlantians so we would be well-rounded from a soul level.

To me the important thing to realize about Mother Lemuria and Father Atlantis, is that it was the first manifested form of polarity on Earth and within the humans that lived on her! Right brain, left brain, heart vs. intellect, Nature vs. man trying to control it. It was a process that we all very much wanted to learn and create within, and now here we all are at the tail-end of this incredibly long journey down into dense, polarized, 3D physicality, ascending or shifting back up and out of dense polarized bodies/consciousness/planet/reality! Damned impressive don’t you think?    Yeah, “…what a long, strange trip it’s been…”

Now let’s finish this original Lemurian, and later Atlantian Project up by pondering some of the end results of this massive planetary journey into and back out of. I usually perceive great, massive concepts and knowings as wildly simple symbols and this one is no different. Here’s what I see, what I know about all of this from a higher simplified level.

That’s it! We were 1 (unified) but desired to experience being 2 (seemingly separate from Source and eventually also polarized and dense) and so we did. Now we’re working and struggling via the Ascension Process to turn this whole thing/planet/humanity/reality around and get ourselves put back together again and hang out for a good long while in a new higher NON-polarized place with some lofty High Heart views. We desire to unify the 1 and 2 and create anew as new beings 3, because of what we’ve experienced, learned and created while within the 1 and the 2! Honestly, for a moment I ask you to sit and ponder what you and I can now create simply because of this Journey we’ve been on. What do you sense we can now create and experience within the 3 being 3’s now ourselves? That is the really magnificent question, the really magnificent potential before us now because we’ve ascended or evolved into the 3 state of unity after our Grand Journey out of it and back again…but now with important and hard earned new tools.

Copyright © Denise Le Fay and TRANSITIONS, 2010-2013. All Rights Reserved. You may copy and redistribute this material so long as you do not alter it in any way, the content remains complete, credit is given to the author and you include this copyright notice and link.  https://deniselefay.wordpress.com/

Yes, would that not be wonderful?

Yet, we can learn to enjoy every moment we live in!

wow what beautiful memories and so lively wrote, I could feel the ambient, thanks for sharing.

Permalink Reply by Carmen Elsa Irarragorri Wyland on December 21, 2018 at 11:05am

But I had a vision, while in Mexico City's proximity, of being in a city just like where I was, but the element of water, instead of air, surrounded us.

Well after all the Aztecs build Teotihuacan on top of a lake....