According to two notable gentlemen such as Roman Emperor Julian the Apostate (circa A.D. 331–363) and Calvinist theologian Isaac de La Peyrère (1596-1676) - Pre-Adamite beings did exist in the distant past on our planet.

But may other historians and mainstream researchers suggest there was a race of people inhabiting Earth before Adam and Eve lived on our planet.

Due to religious text the supposed religious notion of the “fall” of “Satan” a widespread destruction occurred on planet Earth. The result of this destruction was so extensive that the world had to be redone with Adam and Eve being the first humans.

But what happened really? Did “civilization” on Earth “restart” several times in the distant past from extraterrestrials from other planets?

28 And God blessed them. And God said to them, “Be fruitful and multiply and fill the earth and subdue it, and have dominion over the fish of the sea and over the birds of the heavens and over every living thing that moves on the earth.”

Considering the genealogy of man taking into count that Adam was the first human being in our era, it is reasonable to estimate that from Adam to our time about 6,000 years have passed. There were 76 generations from Adam to Jesus which are recorded in Matthew 23: 38.

The History since God created the planet and from Adam to our time is just a fraction of the age and history of our planet and the universe. There have been other civilizations before “religion” was even created.

The Adamic age, as the Bible suggests, will last 7.000 years culminating in the millennial reign of Christ on earth ruling from Jerusalem, and we are nearing the completion of the first 6,000 years of the Adamic period.

It is well-known that the Bible wasn’t actually made as a Book telling a universal history, nor cosmic or geological history and according to many researchers, it cannot be considered as a book of science either.

Even though the bible clearly states, in the early chapters of Genesis that god is the responsible creator of the universe, man and animals, we cannot seem to understand what the bible suggests happened before this time.

We know today that our planet has been “here” for over 4,500 millions+ of years and that the universe is around 13,700 million years old +. Some scientists suggest the age of both the universe and our planet is much much older.

There are even certain Mayan texts which indicated that our universe is around 16,700 million years old +. These texts were inspired by “fallen angels” and thus seen as “Gods” who gave the ancient Maya great knowledge.

Teaching them in Astronomy, engineering, and mathematics, allowing them to erect some of the greatest temples on Earth, like Chichen Itza. Even though some consider these tales of gods only to be a myth, many believe that there is much truth in them...especially as they mimicked these gods in their looks by extending their own skulls by Artificial cranial deformation to do it..

Researchers have come across numerous findings which have confirmed that man has existed on Earth way before sacred books like the bible suggest.

Is it possible that the Bible speaks of beings that belonged to these ancient civilizations?

Some researchers believe that there is physical and Biblical evidence which points to great knowledge and scientific breakthroughs which the bible does not contradict.

Is it possible that all of the highly advanced technologies that we have developed such as lasers, atomic bombs, satellites, computers, space ships and so on, existed in the distant past? With civilizations that predate “Adam and Eve”? According to Biblical accounts, nothing is new.

Researchers have found, in all corners of the world, physical evidence that points towards the existence of highly advanced ancient civilizations & technologies beyond their time according to our history told to us:

But is it possible that these findings are indications of Pre-Adamite civilizations?

Many researchers believe that highly advanced beings existed on Earth in the past, the evidence speaking of these beings can be found in ancient texts from different countries religions. The bible is just one of them.

From all of the above biblical text we know that God did not create a planet empty nor in chaos, but Earth had become a desolate planet filled with destruction. Isaiah 45: 18 and Genesis 1: 2

We also know that God decides to ravage the land but not completely destroy it. Jeremiah 4: 27

We have found many pieces of evidence on our planet which confirm that after periods of civilized life on planet Earth, came cataclysms and destruction, but not a complete destruction of life on the planet fullstop.

It is as if the planet restarted several times, with the arrival of different  human beings, animals and life in general.

There is physical and Biblical evidence which indicates that possible existence of great cataclysms and catastrophes in the universe and on our planet which seem to support the idea that our planet passed through several stages in the distant past.

We are surely not the first civilized human beings that inhabited this planet. Human existence and this planet are a lot older than our history books  actually claim it to be..

Excellent sis! Thank you so much!

Indeed, there is much to learn and discover.

Like the stifled truth about the civilization in pre-glacial Antarctica.Fabulous facts or fabulous fable. Everyone has to work it out for themselves. Bearing in mind that parallel universes DO exist... 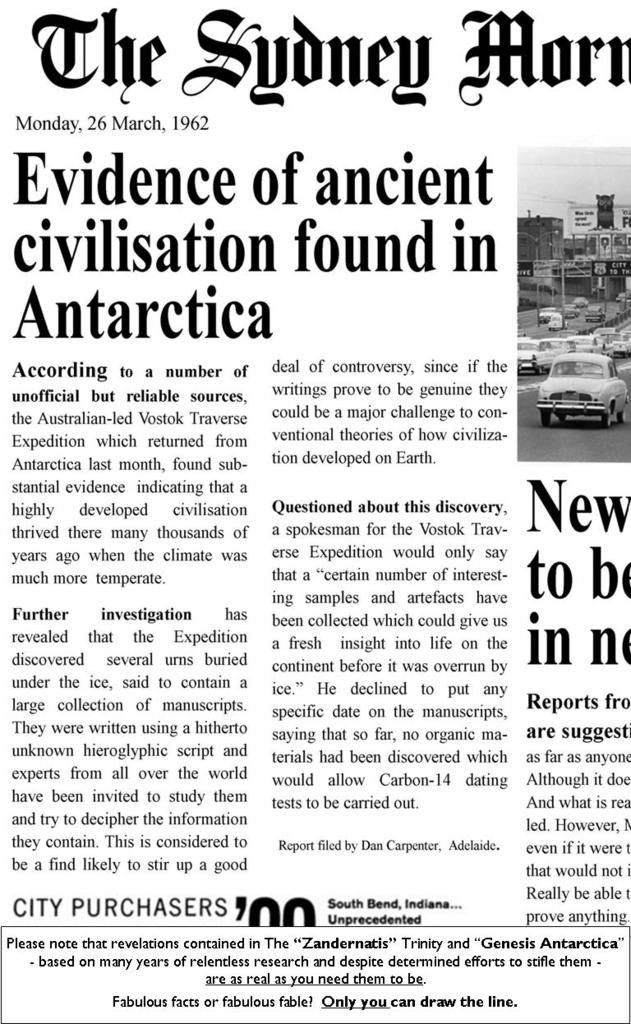 Members of the Editorial Committee at the Dickensen Archeological Institute disagreed on how to make their discoveries public. Fortunately, the Lucerne-based Past Life Memory Research Institute provided some amazing corroborative proof which kept the debate alive until at last that whole story was revealed in 2015. 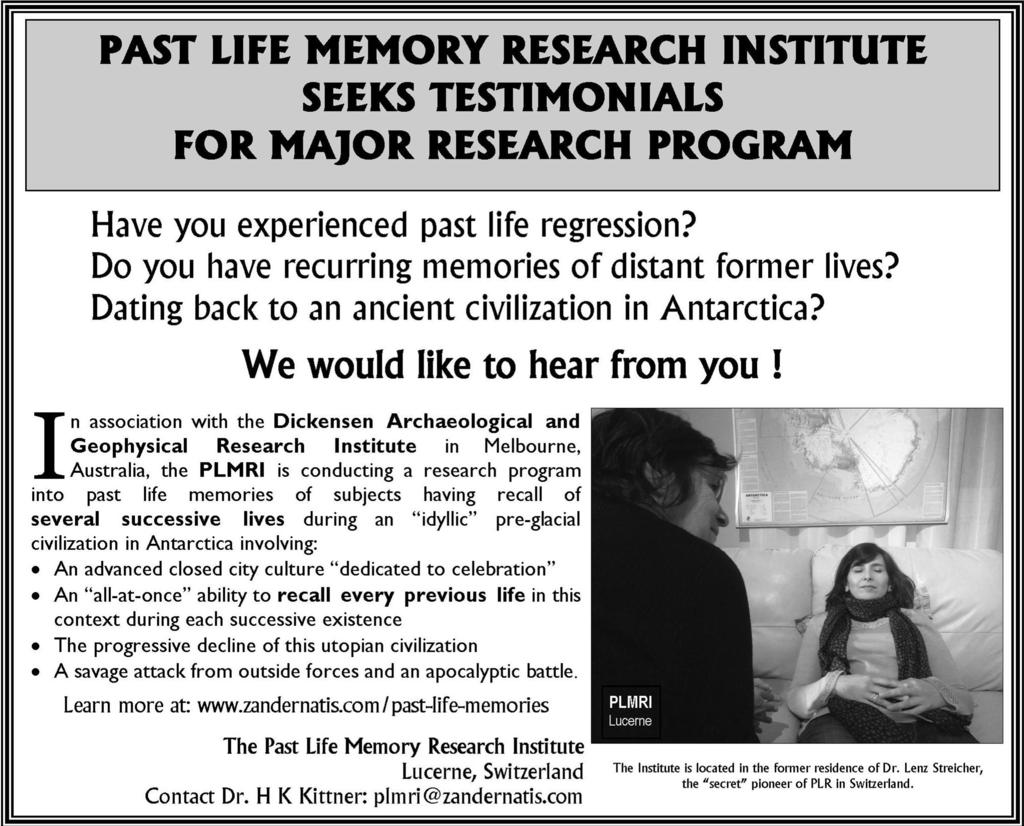 Gordon, thanks for your replies, I know parallels universes exist, for sure, since I myself have re-lived other lifetimes, and they are not necessarily in a straight time frame, time does not exist as we believe we think we know it, I have remembered lives on the same time frame, which had no other explanation other than I was living in two places, at the same time.

I've had dreams of myself of which it seems the same time line.   But in a different place.  I feel that the person in the dream is me.  Pretty vivid I guess you could say.  But when I see myself I'm often someone else, but I just know it's me.

We're all actors and actresses in our own plays. It's good to realize that. Just want to hope we're good scriptwriters as well !!!

Well, Ali, as far as I am concerned, when I dream, I am the script writer, the director and all the actors, since I know what everyone is doing thinking and should do or think.

I orchestrate the whole dream, and play all the parts!

Thank you for your comment.It is a great encouragement because the purpose of this book is sometimes misunderstood. Even though it is clearly described as a "meta-realist allegory" there are always one or two who miss the point and think it's just a hoax. Most readers are totally convinced that everything is "in this universe" until they reach the end of the first book... But by that time they are so caught up in the ancient legend, the conspiracy, the rise of a spiritual movement devoted to spreading the philosophies of this ancient civilization, etc. that "truth as we know it" ceases to have any real importance.

There are also those who identify entirely with the entire eco-system, are totally engrossed by the ancient legends and start contacting the PLMRI and the NZO (Neo-Zandernatist Order)...

With blessings from "Paradise".