10 Iranian Artists You Should Know

Iran’s turbulent political history is no match for the development of an innovative contemporary art scene. Iranian contemporary artists – many of whom have had to move out of the country due to the Islamic Revolution – have found ways to bridge their rich traditional cultural heritage with modern multidisciplinary practices. We take a look at ten of the best Iranian artists garnering international acclaim.
‘Certified Copy’ | ©ArtificialEye

Abbas Kiarostami (b. 1940, Tehran) is a filmmaker, screenwriter, and photographer who’s been active since the 1970s. He began his career as a painter before moving on to illustration and graphic design for the advertising industry. His films, which challenge stereotypes and are characterized by their philosophical tone and poetic vision, have received critical acclaim worldwide. His 1997 film Taste of Cherry, recounting the drama of a man determined to commit suicide, won the Palme d’Or at the 1997 Cannes Film Festival. In his recent films, Certified Copy (2010) and Like Someone in Love (2012), Kiarostami filmed outside of Iran for the first time – in Italy and Japan, respectively. Kiarostami’s photographic work bases itself in the same poetic language used in his films and portrays the natural landscape of Iran. The artists says, “I prefer the countryside to cities. This is also true of my films.”

Abbas Koswari (b. 1970, Tehran) is a photographer who began his career as a journalist working for Persian and English newspapers in Tehran – most of which are now banned from publishing. He has worked as a freelance photographer for international photo agencies and magazines, and his photos have been published in international publications such as Paris Match, Der Spiegel, and Colors Magazine of Benetton, amongst others. He was shortlisted for the 2014 Prix Pictet (Earth section) and also exhibited in 2012 at the Victoria & Albert Museum in London as part of an exhibition titled Light from the Middle East. In the latter exhibition, his photograph Halabche (2003) portrays a Kurdish combatant wearing a rock T-shirt and weapons. The contrast between these elements reinforces “the incongruity between warfare in Iraq and western pop culture.”

Afshin Pirhashemi (b. 1974, Urmia) creates photorealistic paintings that examine the complexities of life in modern day Iran. His portraits often bleed at the edges in a dramatic character. Much of Pirhashemi’s oeuvre concentrates on the duality and contradictions of contemporary Iranian life. A particular fascination for the artist lies in the role of women in contemporary Iranian society and their relationship to their environment. His mostly monochromatic, black and white paintings are a fertile ground for the exploration of the many facets of women. Through a personal reflection on the life and dissolution of his own marriage, in this oeuvre, Pirhashemi explores themes of marriage, intercourse, betrayal, revenge, attempt for redemption and, ultimately, the destruction of both parties.

Farhad Moshiri (b. 1963, Tehran) creates artworks that fall somewhere in between Iranian tradition and the globalized consumerism that characterizes modern-day Iran. Moshiri’s practice draws from a wide range of influences, including Pop Art, conceptual art, comics, advertising, classic portraiture, and religious iconography. His oeuvre takes shape across mediums, from painting and embroidery to sculpture, video, and installation art. Farhad Moshiri became the first artist from the Middle East to sell a work of art at auction for more than one million dollars, when his Swarovski crystal Eshgh (Love) (2007) sold for $1,048,000 at Bonhams’ first Dubai auction in 2008. One of Moshiri’s most popular series of paintings are of antique Iranian jars, urns, and bowls. Through the cracked, distressed surfaces painted on canvas, the vessels evoke ancient Persian history. On these vessels he superimposed Farsi calligraphy that referenced the pop calligraphy movement of 1960s Iran.

Golnaz Fathi (b. 1972, Tehran) has emerged as one of only a handful of women trained to the highest level in Persian calligraphy. Using a traditional medium predominantly reserved for men and religious scripture, Fathi explores the potential of calligraphy as an art form, reinterpreting it through an abstract gestural style. Her practice is inspired by Abstract Expressionism and Middle Eastern Modernist art of the 1950s and 60s, which employed the written word as a pictorial element. Fathi’s work takes shape through drawing, painting, and LED light installations that are unavoidably steeped in classical calligraphic styles and techniques, but that simultaneously break the rules to create an alternative idiom through her own subjective expression.

Monir Shahroudy Farmanfarmaian (b. 1924, Qazvin, Iran) is a pioneering contemporary Iranian artist. Her practice merges traditional elements such as geometric patterns and cut-glass mosaic techniques with an aesthetic of Western Modernist abstraction. After spending more than a decade in the United States pursuing art education, the artist returned to Iran in the 1950s. She began to experiment with techniques of reverse-glass painting and mirror mosaic, combining these techniques with Sufi symbolism, Islamic geometric design, and Western Expressionism and Minimalism. When the Islamic Revolution took hold, she emigrated to America where she remained until her return to Tehran in 2004. Farmanfarmaian’s kaleidoscopic works of complex geometrical patterns reference a range of influences in Islamic art, architecture, and science. Her work embodies the interaction of surface texture, light and reflection, color and form. 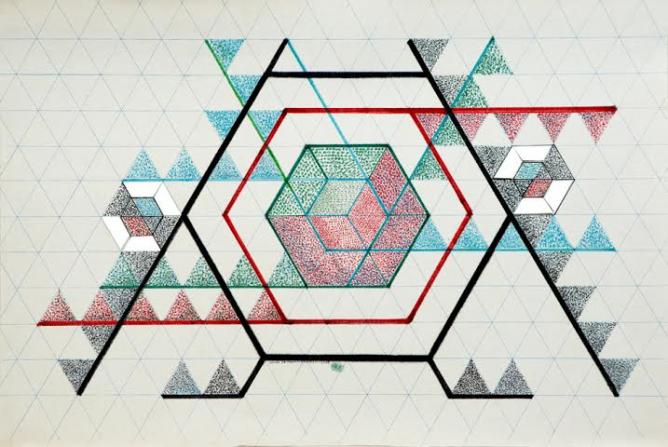 Parastou Forouhar (b. 1962, Tehran) is the daughter of activists who were murdered by the Islamic Republic’s secret service in the autumn of 1998. Channelling her grief into art, she created Documentation (1999) – a work comprised of the documents she found whilst researching her parents’ murders. Her artistic practice draws on her rich Persian cultural heritage, while and her poetic, graceful imagery hides a darker, more violent truth: pain, dislocation, and trauma. In her Written Room series (1999-ongoing), she creates calligraphic installations in which she covers the walls and surfaces of galleries with intricate, rhythmic lines of Farsi calligraphy. In these works, which record names, memories, and fragments of words, the script loses its linguistic function, becoming secondary to aesthetic.

Reza Derakshani (b. 1952, Sangsar) is a painter, musician, and performance artist. In 1983, he was forced to emigrate due to the Islamic Revolution. Finding inspiration in his home country’s rich complexity, he combines his music and visual art in performances that merge age-old traditions with contemporary creativity. During his exile, he incorporated influences of Modernism into Persian motifs to develop a visual language of his own. This language often piercingly addresses the challenges of calling multiple places home and the complexity of modern Iranian cultural history.

Simin Keramati (b. 1970, Tehran) is a multidisciplinary artist. Central to her practice is the use of her own image as the model for her works, or as she calls it, its ‘interpreter’. In her video ‘Self-Portrait’ (2007-2008), Keramati deals with her own female identity. While her face slowly melts into the black background, handwritten phrases in both English and Persian appear on screen, expressing the artist’s thoughts and emotions at the time of creation. The video dramatically addresses the process of losing her own face – her personal identity, erased by cultural conventions of Islamic societies, where women have to wear a veil. Much of Keramati’s work draws on feeling of anxieties, fears or traumas derived from violent events that include the bloodsheds resulting from conflicts in the Middle East. In her 2012 video ‘Biopsy of a Close Memory’, the artist is dressed in white and ‘slapped’ in the face with splashes of red paint, a symbol for the memory of violence witnessed in the news. Her graphic and stylised paintings also comment on the contradictions inherent in her cultural and social environment, rich with history and traditions, yet prone to oppression, violence, destruction and war. 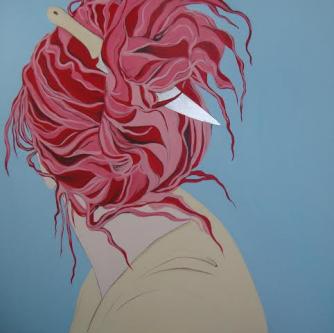 Simin Keramati, Red Hair, 2011, from the series “Living in Between the colors of my Flag”, acrylics and silver leaves on canvas, 150 x 150 cm. Private collection of Mrs Mina Etemad | Courtsey the artist

Shirin Neshat (b. 1957, Qazvin) explores issues ranging from memory and identity to the definition of gender roles in Iranian society. As a displaced Iranian living in the United States, Neshat’s exploration of socio-political narratives in her native country derives from the vantage point of an immigrant who was unable to return to Iran for 20 years. Having moved to the United States in 1974 to pursue higher education in the arts, Neshat did not create her own art until 1993 when she first returned home. Neshat’s first artworks were photographic, and explored notions of femininity in relation to Islamic fundamentalism and militancy. She moved from overtly political commentary to the presentation of more poetic imagery and narratives with her video installations. Since 2003, Neshat has continued to examine the central themes of religion, violence, madness and gender in various works, from her photographic series Zarin (2005), to her feature film Women Without Men (2009, Silver Lion at 66th Venice Film Festival).