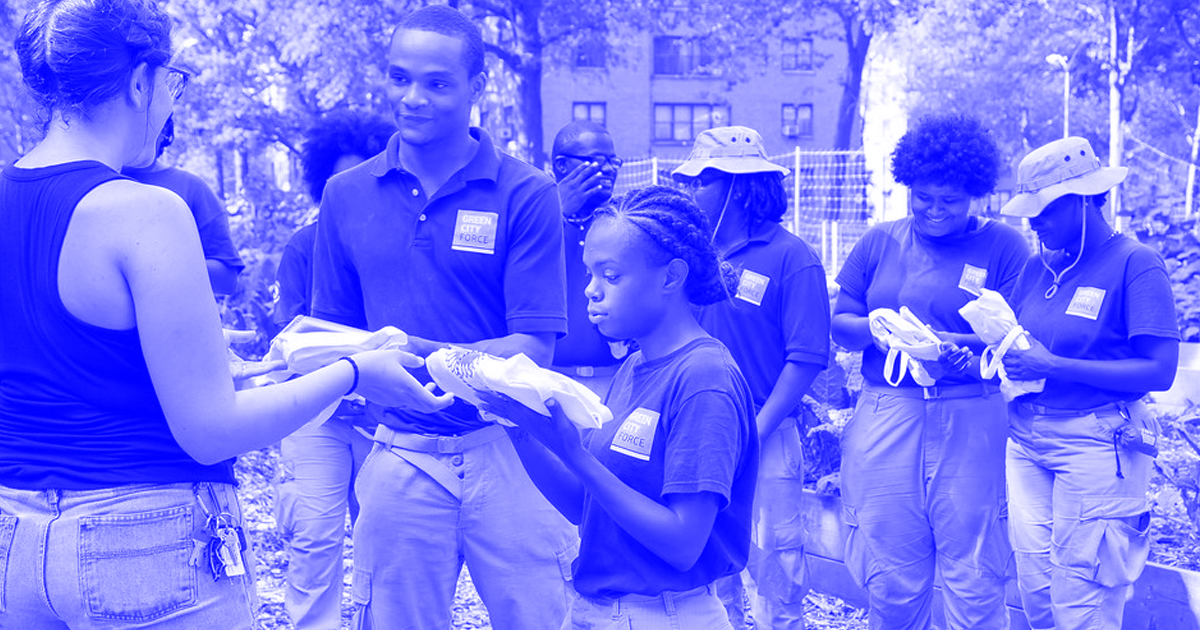 A sustainable revolution is coming.

As a part of their Explorer Series, Allianz is bringing a team of innovators to MoMA’s PS1 for a night full of urban sustainability solutions. You’ll have the chance to collaborate with experts and forge connections with your NYC neighbors who also believe that they can lead the charge in the sustainable revolution. One such New York City organization helping to achieve this is Green City Force.

Every day, young adults with big dreams and potential are forced to take dead-end jobs that (barely) pay their bills, thanks to hurdles like education inequality, crippling student debt, and a lack of access to expensive or unpaid training programs and internships.

But one Green City Force is changing that, and transforming New York City in the process.

Green City Force is a non-profit AmeriCorps organization that works with the New York City Housing Authority (NYCHA) to train the young residents of NYCHA buildings for careers in the green economy. Through their program, Corps Members realize that along with paying well, a career in the rapidly growing green economy also allows them to improve their communities and power a sustainable revolution.

That need for sustainability has never been more urgent. NYCHA already serves 500,000 New Yorkers, or about as many as the entire population of Atlanta. With looming global issues like a rising urban population, the climate crisis, and growing income inequality, city officials worldwide are already having to plan for a future where they can sustainably house, employ, and feed billions more people.

Introducing progressive ideas about sustainability can be challenging. But one of the reasons that Green City Force so successfully penetrates NYCHA communities is its credible messenger model. Each initiative, at its core, is simply one resident talking to another.

“Sometimes sustainability is the last thing on NYCHA residents’ minds, but they’re hearing about it directly from people they can relate to,” said Bahij Chancey, a senior manager at Green City Force. “Older NYCHA residents see the young people of their community involved in positive changes, and want to get on board.”

One day a week, Corps members receive training in eco-literacy and the green economy. After they’ve completed the program, Green City Force taps into their ever-expanding network of corporate partners and alumni to help 80% of the graduates find a job within six months.

“A lot of these young people were unemployed and didn’t know how to enter the workforce, or were in jobs with no room for advancement,” noted Chancey. “But they complete the program and instead of working for a paycheck, they have a new passion and urgency for this work because they see themselves as the solution. They have a big task on their hands, but they take it with a lot of enthusiasm. There is a big attitude of, ‘I’m ready to change the world.’”

Ready to learn how you, too, can do your part in changing the world? Check out Allianz’s Explorer Series event in New York City.

Allianz is bringing a team of innovators to MoMA’s PS1 for a night full of urban sustainability solutions. You’ll have the chance to collaborate with experts and forge connections with your NYC neighbors who also believe that they can lead the charge in the sustainable revolution. Tickets are going fast, so get yours today.

Futurism fans: To create this content, a non-editorial team worked with Allianz, who sponsored this post. They help us keep the lights on. This post does not reflect the views or the endorsement of the Futurism.com editorial staff.