There is no more powerful symbol than Celtic dragons 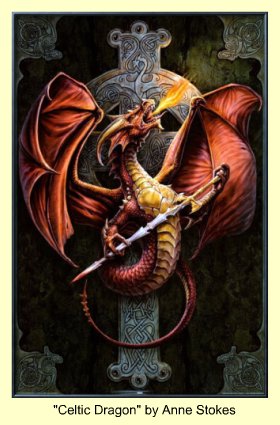 To invoke such reverence from the Celts, who were one of the most fierce and rugged ethnic groups in ancient times, they must have been much more than just fire-breathing beasts. Although dragons are usually associated with Asia, these mythical creatures can be found in fairy tales and folklore all over the world, including Celtic Ireland.

In the secular world of Celtic chiefs and warriors, dragons are merely symbols of the power of the chief. Indeed the Celtic word for "chief" is Pendragon.

But in the esoteric world of spirituality, Celtic dragons represent much more...

What magical powers do these mysterious creatures possess that was so important that we can find tales including rituals of sacrifice to the mighty dragons?

Dragons have always been associated with the Power of the Land. Even today, in many esoteric rituals, people believe that invoking the "Eye of the Dragon" will increase their personal power.

The ancient Druids believed the Earth itself was like the body of a dragon, and they built their sacred stone circles upon the "Power Nodes" of this body. They believed dragons connected us with the Earth's magnetism and healing waters.

Many of us have heard the mysteries of the "ley lines", especially in relation to the location of mystical sites such as Stonehenge and the site of many mysterious crop circles. What you may not know is that another way of saying "ley lines" is "Dragon lines". 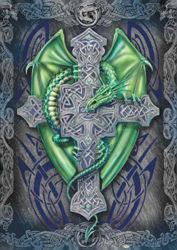 In ancient Celtic Ireland, the "ley of the land" was not about the geographical, physical nature of one's surroundings. It had a much more powerful meaning than that.

But far from the terrifying creatures we see in films, dragons were more than fire-breathing beasts with the power to destroy.

The Anglo-Saxon word "dragon" is derived from the Greek word meaning "to see clearly". They believed dragons had the gift of vision, wisdom, and prophecy. Dragons were considered the guardians of all knowledge and wisdom.

The dragons were revered like gods, believed to bring Earthly and Heavenly forces together. Celts believed dragons guarded the gate to both the Heavens and the Underworld.

As guardian spirits who protect the Earth and all living things, Celtic dragons are arguably the most powerful of all the Celtic symbols. 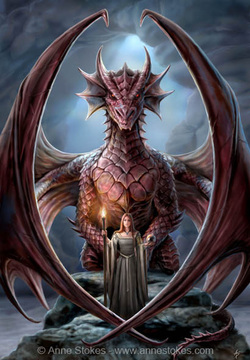