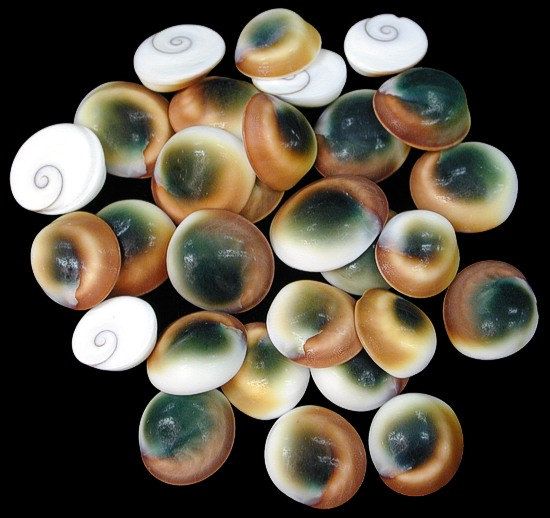 Cat's Eye's are a natural biological curio that is held in high repute as a magickal charm.
Cat's eye shells are commonly found in African-American mojo bags prepared for protection from evil, for uncrossing, and to break a jinx. This probably derives from their use in European folk-magic since the evil eye belief itself, and thus the use of eye-charms to repel the evil eye, is Middle-Eastern in origin and spread from there to India and to Europe.

Because of its unique and shiny eye-like appearance, it is thought to be particularly beneficial in warding off the Evil Eye or Mal Occhio. In former times this curio was so highly valued for such a purpose that jewelry made from this unusual shell was worn as a protective amulet. Carrying this curio in a red conjure bag with a pinch of rue provides protection from getting crossed up or jinxed. Add a pinch of slippery elm to the bag for immunity from slander, hidden enemies and false friends.

Cats have long been associated with luck in Hoodoo and it is believed that carrying one of these natural talismans or adding one to your mojo or gris gris will increase it's luck and power. It is also used to strengthen psychic ability, enhancing your own insight and psychic sense.

Cat's Eye shells are the operculum, or foot-closure, of a sea-snail called a Turban Shell . They are commonly used in Europe and the Middle East for protection against the evil eye, no doubt because they themselves resemble eyes. These shells are a perfect representation of the "doctrine of signature" law in Hoodoo, which states the physical appearance of a curio or herb is also connected to it's magickal or medicinal use.

Hey sis can I use this in the new group on WM.