How to Build a Día de los Muertos Altar 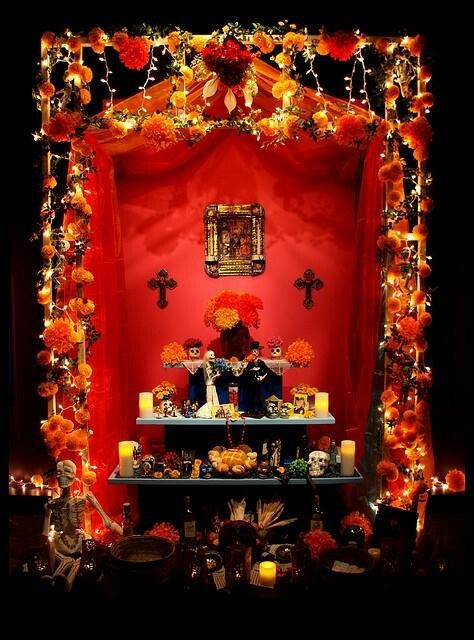 Every November 2, known as the Day of the Dead or All Souls’ Day, Hispanics transform grave sites, offices, and corners of their homes into vibrant memorials for their deceased loved ones by assembling multitiered ofrendas, or altars. “The day is devoted to the departed, and an altar pays special tribute,” says Malena Gonzalez-Cid, the executive director of Centro Cultural Aztlan, a nonprofit that has organized San Antonio’s largest Día de los Muertos celebration for 32 years. Altars are also meant to welcome returning spirits, so they include both personalized and traditional elements—including several dating to the Aztecs—that will guide an honoree on his journey from the land of the dead. Here’s how to offer a proper reception.

• A large photograph of your loved one is the centerpiece. Smaller, informal snapshots can adorn the lower levels.

• Water or, more typically, fruit punch is served to refresh a spirit after his journey.

• Pan de muerto , or “bread of the dead,” is a sweet treat. Found at most panaderías, the round loaf is topped with a skull and crossbones.

• Salt, a symbol of purification, is for the dead to season the food you’ve offered him.

Fruit — specifically tejocotes and oranges.  Tejocotes are a mild, seeded fruit that taste like a cross between an apple and a pear. No one I know eats them raw. Instead, you boil the fruit in syrup or cook it to make ponche. In the case of the Day of the Dead altar, the fruit, along with oranges and other seasonal items, symbolize the earth’s bounty. And it’s something for your loved ones to eat on their journey into the next world.

• The deceased’s favorite knickknacks, food, or tools (if he was a barber, for example, his straight razor, foam brush, and scissors) create a familiar setting for his return.

• Cempasuchitl, the Aztec term for “marigolds,” grow and wilt quickly, reflecting the fleeting nature of life. Their aroma helps lure a spirit back.

• Papel picado serves as a colorful and meaningful trim: Black represents death, purple means grief or mourning, pink is for celebration, white symbolizes hope, and yellow stands in for the sun.

• Four candles at the top represent the cardinal directions and provide a lighted path to this world.

• Sugar skulls, or calaveras, add a lighthearted touch—for both the dead and the living.

• Burning copal is a holdover tradition from the Aztecs, who used the incense as an offering to the gods. It is still used in Catholic funeral masses.