Things About Day of the Dead That You Need to Know

Día de los Muertos, or Day of the Dead in English, is a Mexican and Central American holiday celebrated during the first two days of November. While certain aspects of the holiday — such as sugar skulls and bright decorations — are familiar to the rest of the world, many people conflate the Day of the Dead with Halloween. The truth is that this holiday is entirely separate, with its own unique and incredible history dating back several thousand years. Here are seven things you should know about the Day of the Dead:

It's Recognized by UNESCO 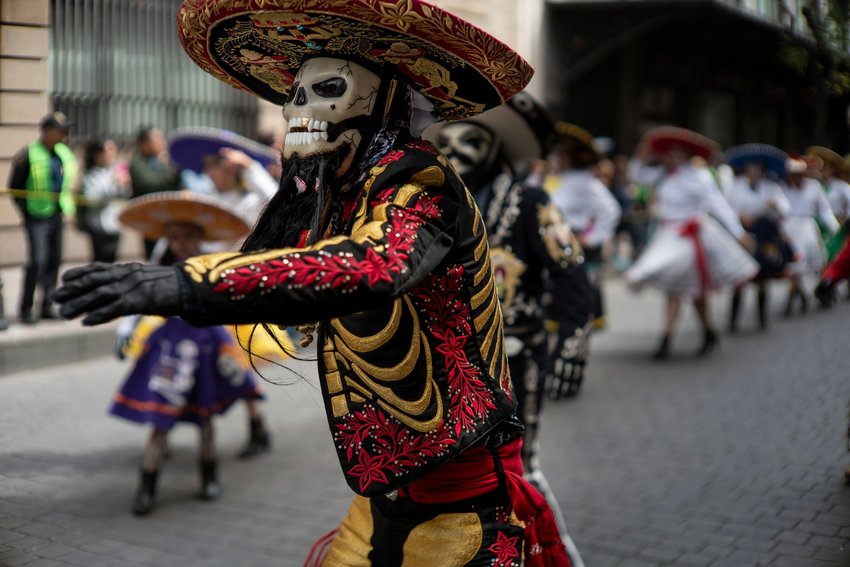 To qualify for this status, cultural heritage must be both contemporary and traditional, blending beliefs and actions from the past into modern-day behaviors. Additionally, the heritage must be community-based, acknowledged and valued by living members of the community in question. In this case, UNESCO specifically focused on the Day of the Dead because of its long history, its importance to indigenous Latin American groups, and its demonstration of the fusion of Aztec and Catholic beliefs.

People May Spend the Night in Cemeteries 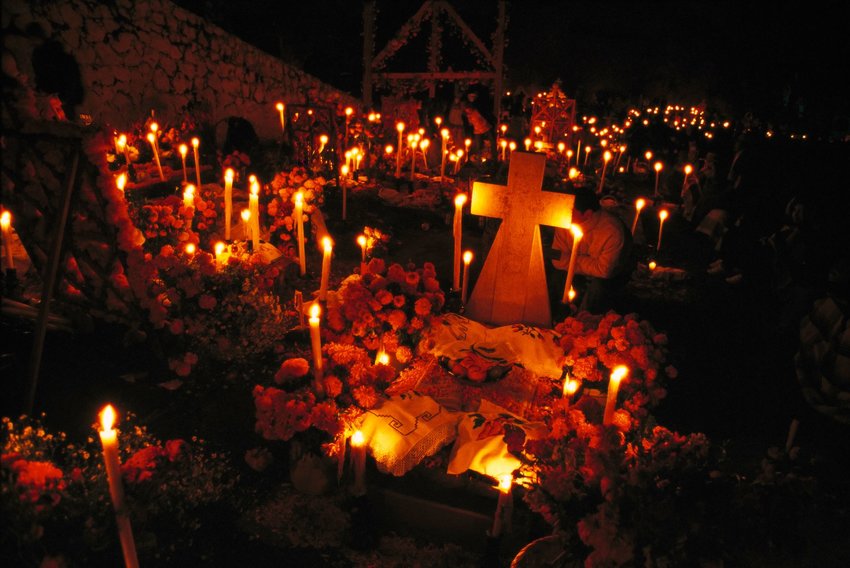 Day of the Dead celebrations often culminate in cemeteries, where people collect around the graves of their loved ones. This does not cause the celebration to take on a dark tone, however — families and friends eat, drink, laugh, play games, and tell stories about the people whose graves they're visiting. It is not uncommon for families to make the favorite food of the deceased, and either leave it on the altar or bring it to the grave site. And once it has gotten late, some families may choose to sleep in the cemetery, spending the night by their loved ones' graves.

It Isn't Meant to Be Scary 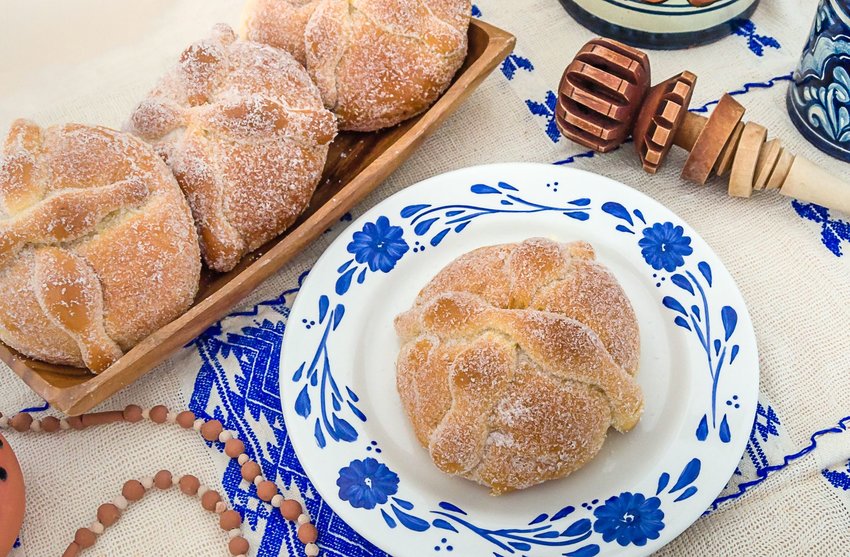 Due to its proximity to Halloween and its focus on death, people unfamiliar with the Day of the Dead may assume that it's supposed to be frightening. Actually, this holiday isn't meant to be scary at all — instead, it is a celebration of life, and a time to reconnect with lost loved ones. Families set out beautifully decorated ofrendas, or alters, to honor and remember their family members who have passed on. People may paint their faces, bake a sweet bread called pan de muerto, and congregate in cemeteries to picnic and play music. Families may also choose to leave their front doors open during the celebration so that spirits can easily enter the home.

The Holiday Originated in Aztec Culture 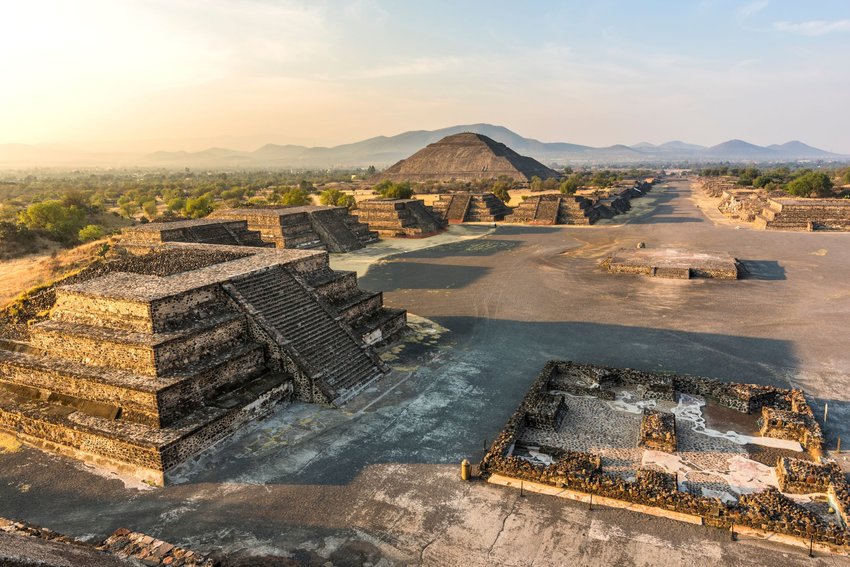 The first recorded instance of a celebration similar to the Day of the Dead occurred in the 1500s. Initially, the holiday wasn't about remembering loved ones — instead, it was a time to worship Mictecacihuatl, the queen of the underworld who was thought to protect the dead. In its original form, the Day of the Dead actually lasted for the entire month of August, during which time Aztec people would leave food out as offerings.

The holiday changed as a result of colonization by Spanish conquistadors, who attempted to convert the indigenous Aztecs to Catholicism. This forced blending of cultures led to the Day of the Dead traditions being held on the first two days of November — All Saints Day and All Souls Day in the Catholic calendar. 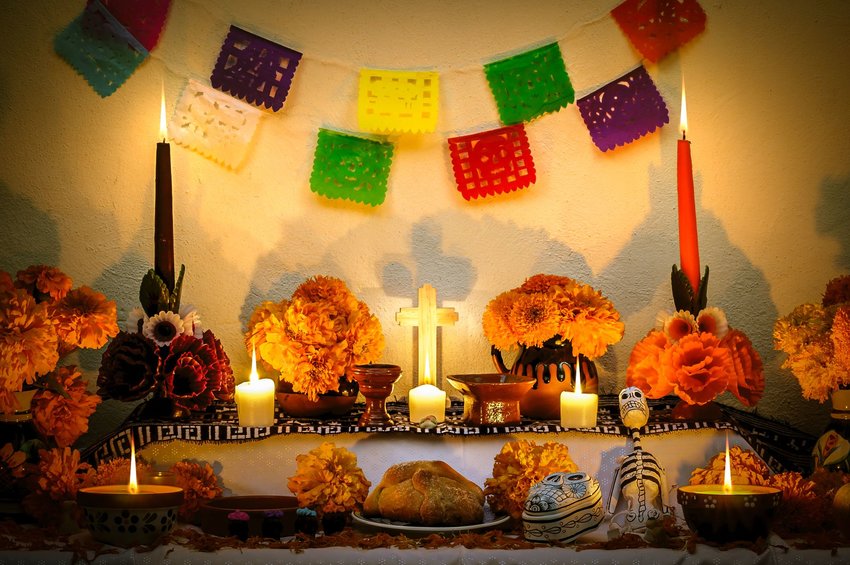 Although the heavy use of flowers during Day of the Dead may surprise people unfamiliar with the holiday, it makes perfect sense. After all, Day of the Dead is a time to remember, honor, and celebrate loved ones who have passed on, and flowers are often placed on graves and alters.

Marigolds are the flowers traditionally used as decoration during this holiday for a number of reasons. They can be locally grown in Mexico, and their vivid color and strong scent are supposed to act as a guide for spirits trying to find their way home to visit. These flowers are also thought to represent the fragility of life. Marigolds are such a common decoration for the holiday that even if real ones aren't available, families often make bright marigolds out of paper and hang them around the house. 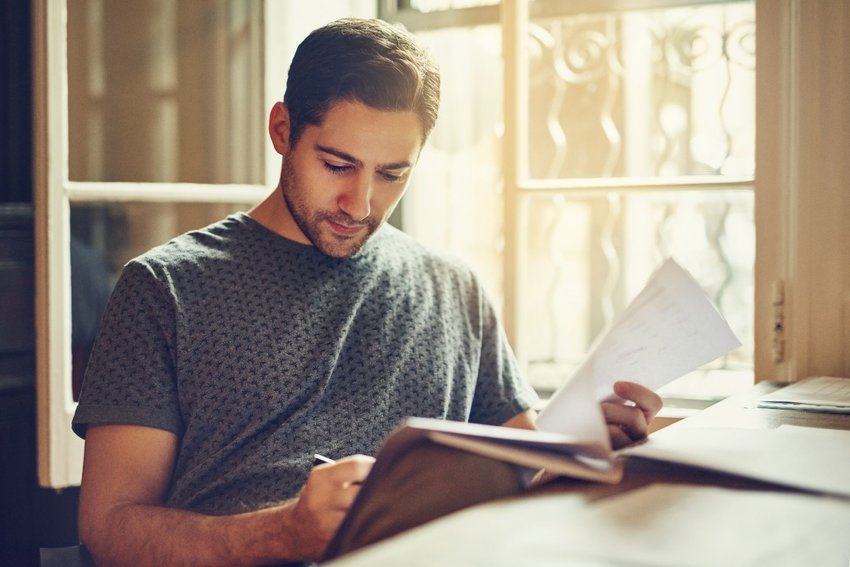 These poems, known as literary calaveras (skulls) or Day of the Dead rhymes, have their roots in Mexico City during the late 19th century. At that time, a publisher named Antonio Vanegas Arroyo teamed up with lithographer Manuel Manila to publish a series of satirical poems decorated with skeleton illustrations. These poems were a way to poke fun at political figures and draw attention to contemporary socio-economic problems — their use of satire enabled the poems to be published at a time when discontent was frequently censored in the media.

In modern times, these poems are still written during the Day of the Dead. They are playfully tongue-in-cheek, often discussing the shortcomings and hypothetical deaths of living friends, family members, or public figures. These poems are published in Day of the Dead newspapers, and schools frequently hold contests to see who can write the best calavera.

It Is Presided Over by La Calavera Catrina 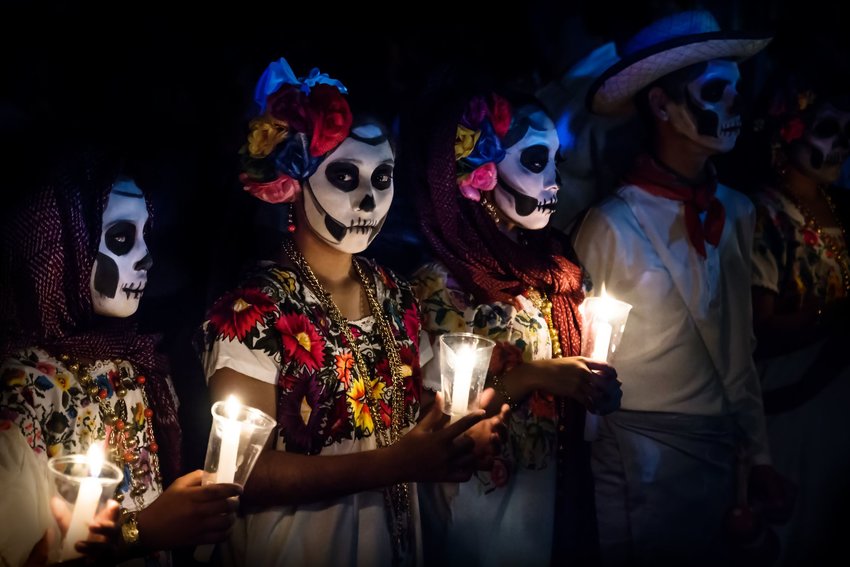 La Calavera Catrina — which translates to "the elegant skull" — is generally referred to as just "La Catrina" in modern times. Sometimes known as Mexico's "Grand Dame of Death," La Catrina first appeared in her present form in an etching by José Guadalupe Posada in approximately 1912. This etching featured a smiling skull dressed in a European-style hat, and was meant to deride indigenous Mexican women who imitated European fashions. 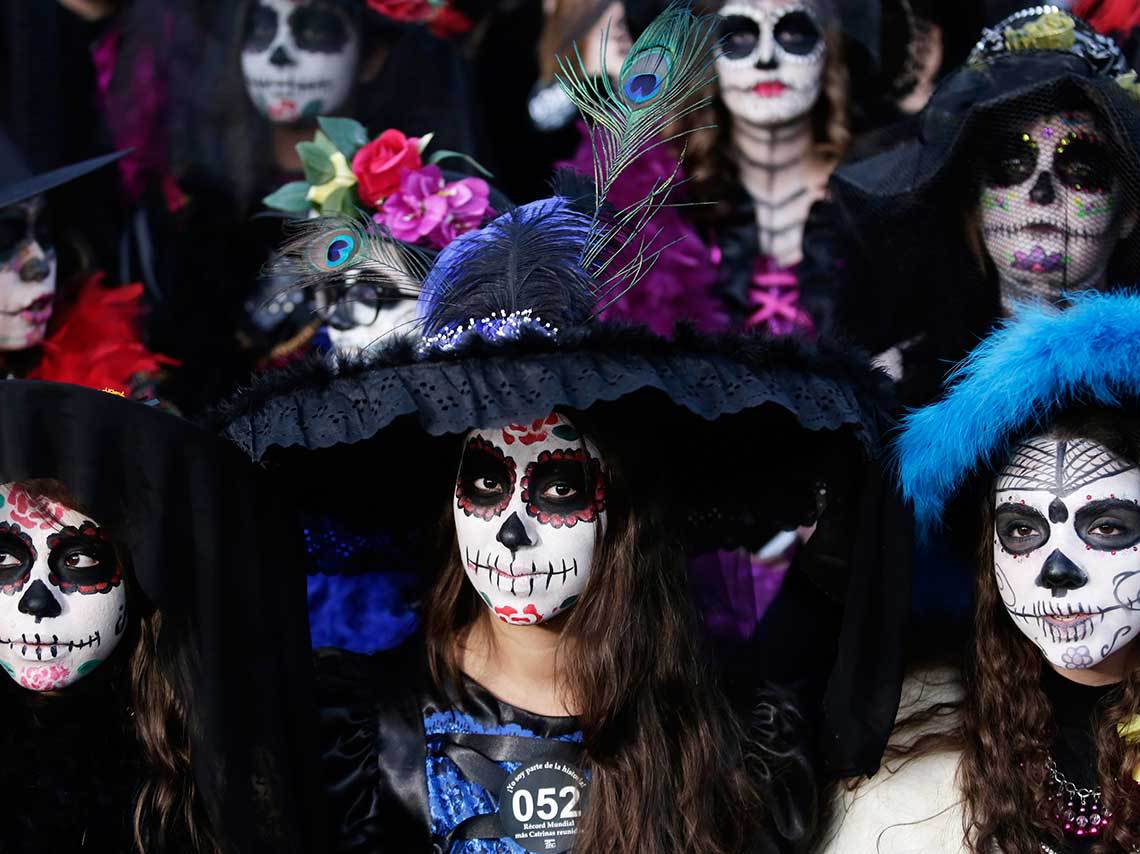 Accordig to El Universal,  the “Día de Muertos” in Mexico has become one of the most iconic festivities of this country and has even managed to cross borders and oceans – most prominently – in the figure of the elegant skeleton lady of La Catrina. Yet where does she come from?

The Calavera Catrina was born in 1912 from the imagination of Mexican artist José Guadalupe Posada, but that wasn’t her name back then. Posada published the first illustration of this great dame of death under the name of La Calavera Garbancera as a social criticism of the indigenous Mexican women who rejected their roots and tried to pass as European.

The engraver was famous for his satirical rhymes, illustrated with skulls and skeletons, which he used to describe the political and religious matters of Mexico, as well as aspects of daily life. Then how did she became La Catrina?

It was Mexican painter Diego Rivera who took the work of Posada and gave it a body. Literally. In his mural “Sueño de una tarde dominical en la Alameda Central” (1947) (“Dream of a Sunday Afternoon along Central Alameda”), Rivera painted the full-bodied skeleton lady as the central piece of his mural, and called her La Catrina, the feminine version of the Catrin, a bon vivant dandy in Mexican culture. In his mural, Diego Rivera featured the Catrina at the center, with a young version of himself on the left, and her creator, José Guadalupe Posada, on the right.

It is due to the merger of Mexico’s Prehispanic ideologies, the Mexican people’s historical focus on death – that is, their willingness to both laugh at it and embrace it with a loving familiarity – and the classism prevalent in the Mexican society, that the Catrina became the embodiment not only of death as a neutralizing force between the rich and the poor, but also, a powerful symbol of what the Day of the Dead in Mexico is all about. And it is becoming famous worldwide.

Permalink Reply by Mystic Wolf on November 2, 2019 at 8:32pm
Wow! Thanks for the great information here on the dead

Permalink Reply by Carmen Elsa Irarragorri Wyland on November 4, 2019 at 11:12am

Certain festivities are interesting.
And very strange too.
Thank you Carmen.

Permalink Reply by Carmen Elsa Irarragorri Wyland on November 21, 2019 at 10:20am