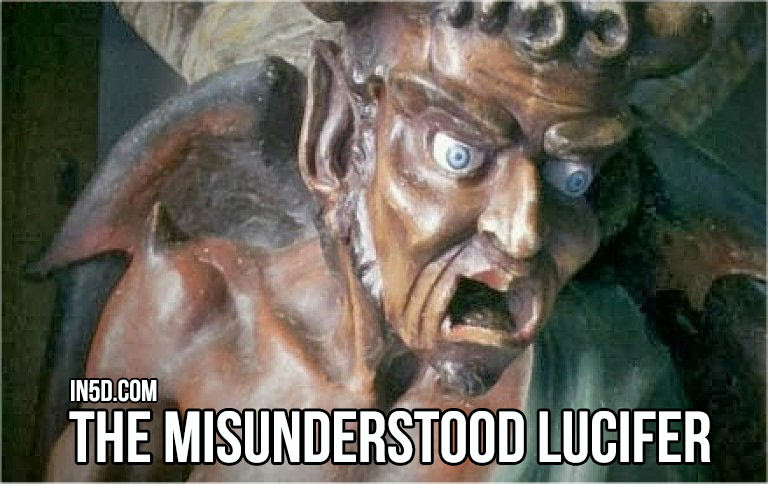 When someone mentions Lucifer, it usually has a nefarious connotation, but who really is this ‘bearer of light’?

History teaches us that Christianity was not founded by Yeshua ben Yosef (Jesus), but rather by Paul.  Also, he never really met Jesus, just claimed to have. Paul was heavily influenced by his current path which was Mithraism, a sun cult and this is possibly where he got the cross. No human living today truly knows if Jesus was crucified, impaled, or even roasted alive. The Roman Soldiers were left to their own devices to be as cruel, lingering, and painful as possible. And they were very good at it. The same guys are said to work for the Russian Mafia now.

There are hints about his death in the scriptures, which were again, mutilated and enhanced by the Council of Nicea under the guidance of Constantine. Who by the way, never was a Christian at all. He just wanted a religion to control, and unify his empire. Christianity seemed to be a good one, but it had lots of problematic teachings that had to be weeded out. What humanity got had little to do with anything the Son of God was believed to have taught.

Who did Lucifer kill or maim? Now look at the god the world worships.  How many have died in HIS name?

Lucifer, wiki: In Latin, from which the English word is derived, Lucifer (as a noun) means “light-bearer” (from the words lucem ferre). It was the name given to the Morning Star, i.e. the planet Venus when seen at dawn.

Who is Lucifer and why has this name been misunderstood for so long?

According to wiki, Lucifer (as a noun) has Latin origins and means “light-bearer” (from the words lucem ferre). It was the name given to the Morning Star, i.e. the planet Venus when seen at dawn. (1)

In astrotheology, Lucifer is Venus while Satan is Saturn, so clearly, the two are not the same.

For more on the Saturn/Satan connection, please read Saturn – Why Are We Worshiping The Cult Of EL?

Recently, a Roman Catholic Church bishop admitted that “hell” was an invention of the church, so the fictitious “Satan” does not exist.

Hades, pronounced HAY deez, was the god of the dead in Greek mythology.   He ruled the kingdom of the dead, which had the same name. The ancient Romans preserved without change almost all the myths about Hades and his kingdom, but they called the god Pluto. Hades was the son of Cronus and Rhea, and the older brother of Zeus, the king of the gods.  In the Bible he is Lucifer.

Venus, the ruler of Taurus and most brilliant star in the evening and morning (other than the moon), was called Faas by the Greek (meaning Light) and by the Romans, Lucifer, the Light Bearer.  To the occultists, Venus was the planet of inner light and illumination.

The Statue of Liberty would better be called the Statue of Lucifer with the right hand bringing the Light signifying the United States’ role as the Right Hand Path of the governmental Luciferian Agenda.

The seal of the honorary 33rd degree of the Scottish Rite of Freemasonry. Here we see the bent blade pointing to the left, signifying the Scottish Rite and Freemasonry as representing the Left Hand Path of Luciferianism. The blade is also pertinent as it is very important in symbolic ritual.

Almost every reference to Light that is available today in scripture or spiritual text  has been placed there by Luciferians. Enlightenment is an esoteric representation of the apotheosis achieved through Lucifer. The ascensions mentioned in many scriptures that are accompanied by a great Light are just the same. Luciferians have placed many symbols in the Christian bible as well. The Lamb, the Way, and the Light are all used to represent Jesus in the bible. Every single one of these is a purely Luciferian symbol placed long ago by my predecessors.

Lucifer was not the serpent in the Garden of Eden. This would be considered blasphemous to a true Luciferian. Reducing the power of Lucifer to a snake in a certain religious scripture is an insult to Him. Similarly, Lucifer is not the biblical Satan or Lucifer, who was a fallen angel. These biblical instances are nothing more than an attempt by the feeble-minded to personify the all-permeating, all-powerful, all-encompassing Lucifer.

“Lately I’ve been thinking. Do you think I’m the Devil because I’m inherently evil, or just because dear ol’ dad decided I was?”   Lucifer Morningstar

Hey Jack, I actually watch that, it's a good show.

i used to watch that too. fun show..