What is an animal empath? 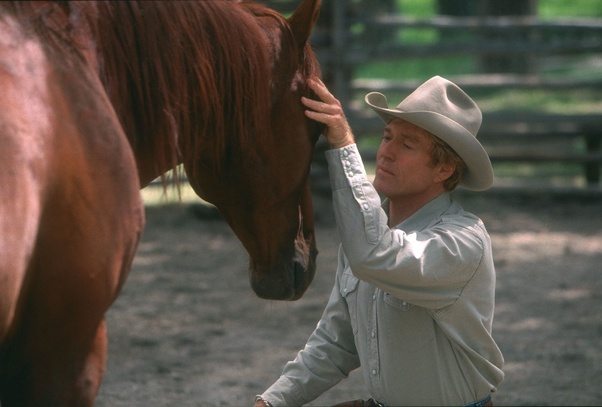 There is no doubt that people such as the character from the movie "the Horse Whisper" exist in real life. The "Dog Whisperer", Cesar Millan is probably the most well known, but what exactly is an animal empath and do they really exist?

An animal empath is considered a person with an exceptional ability to recognize and understand the emotions and mental state of an animal to such a degree as to be able to then interact with the animal and/or positively influence its behaviour.

Animal empaths have been around throughout history. Very often this ability was seen as miraculous. Francis of Assisi and his ability to "talk" to the animals is probably the most well known example of this.
How exactly he was able to interact with animals, assuming it wasn't miraculous, is of course not known. However, judging by his life story he was both an intelligent person, having succeeded previously as a merchant, and an empathetic person. He also lived a life of austerity and, often,  seclusion.

Living on his own and away from his fellow men for long periods would have meant loneliness. Human beings are not solitary creatures. Did this solitude in nature, combined with intelligence and possibly an inquiring mind lead him to observe and learn animal behaviour? Was he then able to interact with these animals and build a mutual understanding and trust based on empathy?
There is no way to know certain but we can look at whether any people today truly are animal empaths.

In order to empathize with an animal it is first necessary to recognize the emotions and mental state being experienced by the animal.

Exactly what emotions an animal experiences is a contentious issue and of course depends on the animal. There is a vast difference between an insect for example and an elephant.

Insects are not believed to experience any emotions. Elephants on the other hand not only experience emotions but are even themselves believed to empathize with other animals.

There is a well-known National parks scout at the Matobo National Park n Zimbabwe who has been interacting with small lizards for decades. He learned this ability from his father. He will call them and feed them from his hand and is able to touch them. No one else can do this, even if they offer the lizards food.

The lizards have learned that they can be fed by the scout and that they can trust him. They do not trust anyone else. So is he an animal empath.
I don't think so. Although what he does is amazing I don't see him as an animal empath. He uses a whistle to "call" the lizards. This call apparently works just like Pavlov's bell. The lizards have learned to associate food with this sound and this sound with the game scout. They do not trust anyone not making this sound. This is trained behaviour and is nothing to do with interacting with the animals because of an ability to identify their emotions and mental state.

Generally the people with the greatest understanding of animal emotions and mental states and most importantly how animals express these are of course ethologists or animal behaviourists.

Their knowledge of animal behaviour often allows them to properly analyze and understand the emotions of animals.

Often this understanding develops into an intuition. Such is the case of ethologist and lion expert Kevin Richards  His amazing ability with lions is remarkable. His knowledge of lion behaviour and the intuition he has developed over many years of interacting with his lions allows him to literally play with them. Is he therefore an animal empath?
Perhaps. He is very likely a lion empath for sure. However, it is important to note that the lions he interacts with are not wild. Therefore much of their behaviour is habituation. So, he very likely could be an animal empath but it is difficult to say so with any certainty unless we see him interact with wild animals. Considering the animals he interacts with are lions I really hope that he doesn't start doing the same with wild lions. That could get messy if his abilities as a lion/animal empath are not certain! 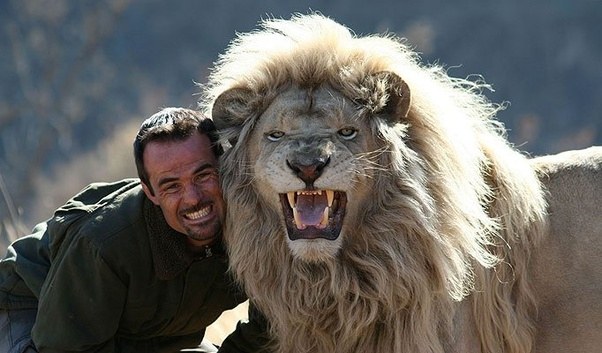 So, are there any real animal empaths? To be more specific are there any people with an ability to go out and approach, understand and interact with wild animals in their natural habitat and without having been unusually conditioned or habituated to man?

I seen some incredible improbable interactions between wild animals and people during the time I have spent working in wildlife areas.

Many of these interactions are quite common. It is quite normal for a Zimbabwean Professional guide to approach elephants on foot and interact with them. After years of observing and studying elephants in their natural habitat and having been intensively trained in approaching them safely this is not really surprising. You just get used to recognizing their mood and how they feel about you and what you are doing.
The following picture is of a Zimbabwean Professional Guide, Ivan Carter, someone I have trained and worked with, at close quarters with a wild bull elephant. Most Professional Guides with enough walking experience can approach and interact with wild bull elephants like this. However, it is also considered ethically questionable as if there is a mistake or something unexpected happens, such as a client screaming with fright, it can all go wrong, resulting in either the death of the guide or the death of the elephant if he is not too close to be unable to shoot it. I only go very close to elephant without clients and when dealing with a very relaxed bull. 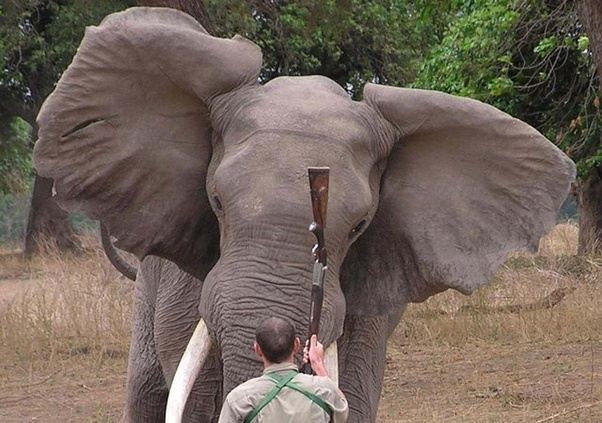 Many skills are used in approaching elephants like this. I wrote a separate answer on this subject which you can see here: Hypothetical Questions: If I wanted to approach dangerous wild anim...

Does this ability make someone an animal empath? Perhaps. However, it is a learned ability and not something purely instinctive. There are also degrees of ability in this regard.
There are and have been many guides with an incredible ability to approach and interact with animals. The most amazing of this has to be the game ranger Willie de Beer. A man who survived being scalped and having an eye popped out along with many other injuries from a lion mauling, a knee smashed by a zebra and being gored by both elephant and buffalo, there is no doubt that he interacted regularly with wild and dangerous animals.

What makes him unusual however was not how many times he was chewed up or stomped on, but his ability to approach and interact with animals in any situation.  Here are some examples:

He would stroll up to lions on the kill and examine them. This is almost guaranteed to get you killed. However, he somehow managed to do it without scaring off the lions and without being killed himself.  Even more remarkably he did this in such a way that the lions continued eating.

Another intriguing thing about Willie De Beer was his ability to approach and interact with different species. In the following picture he can be seen "playing" with an elephant bull, something he did from time to time.
Willie de Beer was involved in the making of films because of his ability to work with both captive and wild animals. Most notably he was responsible for all the animals both wild and tame in the John Wayne film Hatari! John Wayne was fascinated by him and they became friends during filming. 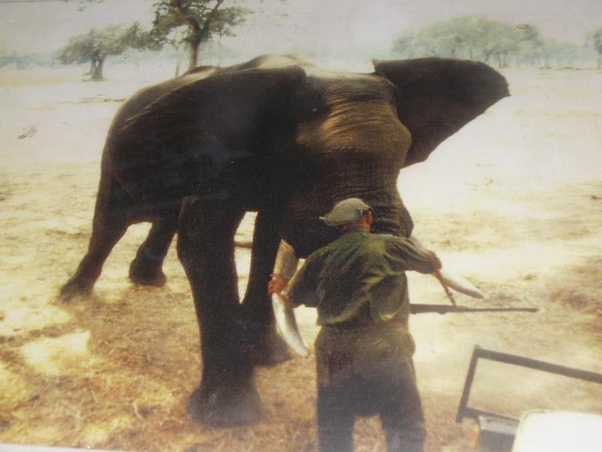 I suppose there are many people who could be called animal empaths. However, a few really have a natural genius for understanding the emotional and mental state of animals and how to calm them. Much may be learned from books or experience but these few exceptional people have an innate and profound intuition which sets them apart.

Everyone is able to study animal behaviour and to learn how to recognize the emotional and mental states of both domesticated and wild animals and anyone who deals with animals, even their own pets, should do so if they want to understand them better.
Animal empaths do exist and it is not telepathy or mystical spiritual connection. It is knowledge, experience and understanding of the animal and a receptiveness to their emotions.


I have had the misfortune of taking many people on safari who have a naive belief that they can somehow spiritually connect with the animals. These people are often a danger to themselves and those around them. They will often try to approach dangerous animals without any clue as to the mood, condition or habituation of the animal and without any idea of how approaches are done. They have usually come to this conclusion as a result of being close to dogs, cats, horses and domestic animals which, because of the fact that these animals are domesticated is obviously a completely different relationship.

Most unfortunately the animals are most at risk from these people as they end up being shot because they defend themselves from these lunatics.


Everyone can become an animal empath in some way but some exceptional people  really are able to "talk" to animals. However, it takes intelligent understanding of animal behaviour as well as sensitivity and empathy in the normal sense of the word
https://www.quora.com/What-is-an-animal-empath

thank you so much for these...

Maybe, sometimes the animals are communicating more with us, than the other way around. My cat for instance..she hates hands..she's letting me know that in my slow way alright lol.

Seriously though, i really enjoyed this , interesting. 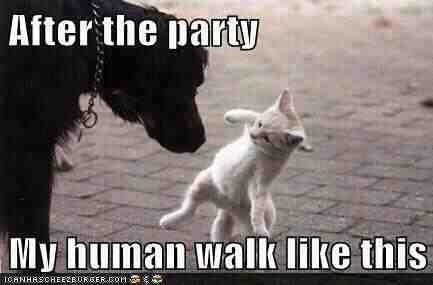 I a few days, hopefully, I'm going to write a more personal one, the effect animals seem to have on my husband and he on them....just need to think it out first.

Permalink Reply by MARGARIDA MARIA MADRUGA on December 9, 2018 at 4:09pm

To me they are fantastic.