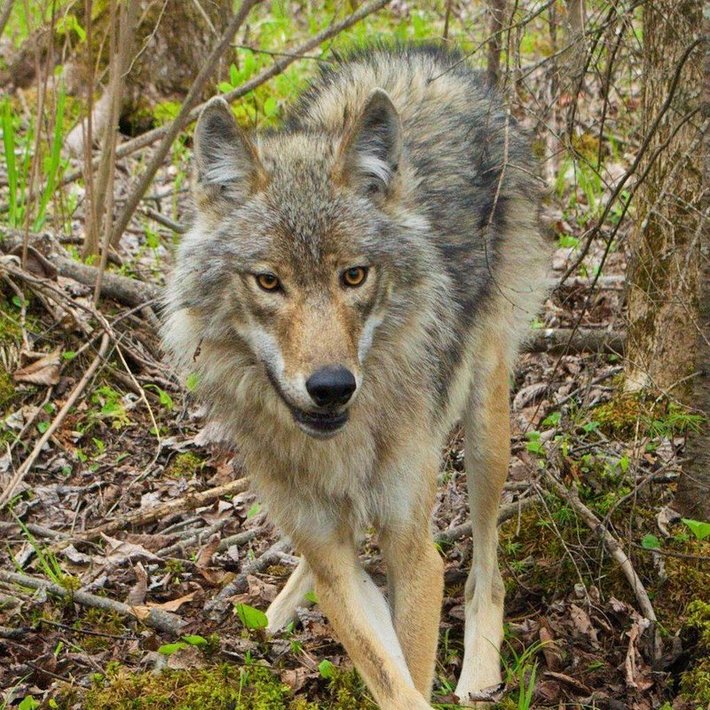 Wolves, as it turns out, might not be the bloodthirsty, moose-slaughtering, northwoods-roaming carnivores you always thought they were.

New research on wolf packs at Voyageurs National Park in northern Minnesota is challenging the conventional wisdom on wolves: Their diets are a lot more varied than scientists previously thought.

Researchers with the Voyageurs Wolf Project, a collaboration between the park and the University of Minnesota, have for the first time documented wolves hunting freshwater fish as a seasonal food source — and they have video to prove it.

A diet of meat and berries

Wolves still rely heavily on deer, but earlier studies on wolves in the park have shown that they also eat a large number of beaver — and even blueberries — to supplement their diet.

These new discoveries, which were recently published in the journal Mammalian Biology, were possible thanks to new technology.

Since 2015, researchers have been placing GPS collars on wolves from seven different packs in and around the park. They collect location data from the animals every 20 minutes, which allows them to zoom in on the animals' predation habits at a finer scale than earlier versions of the collars had permitted: When wolves spend more than 20 minutes at any one site, they know they're probably eating something.

That's how they first suspected members of the Bowman Bay pack were eating fish. In April 2017, University of Minnesota researcher Tom Gable hiked to a creek where one of the collared wolves had spent a lot of time. He was searching for evidence of a kill.


He looked up, and saw a collared wolf about 50 feet away. But the wolf didn't see him.

"It was really crazy," he said. "He came within about 8 to 10 meters of me and he had no idea I was there. I was hiding in the shrubs on the edge of this creek."

For the next 15 minutes or so, Gable watched the wolf meander back and forth around the creek. Periodically it would run into the creek and splash around. Then it stopped, and looked like it was eating something, before returning to the creek.

Eventually the wolf left, and Gable came out of hiding to explore the area. He realized right away the wolf was hunting fish — spawning suckers — in the creek.

Gable and his colleagues quickly learned that little scene he witnessed wasn't just a one-time meal. In the month after his hike to the creek, researchers found the two GPS-collared wolves in the Bowman Bay pack spent about half their time hunting fish there.

About a year later, Gable and his colleagues noticed the pack visiting the creek again, so they set up trail cameras, and caught footage of the wolves fishing at night.

"You can see the wolves abruptly head to the water several times after hearing a splash," Gable said. "They learned what a fish splashing in the creek sounds like and they know that it means food."

The video also captured wolves catching fish and not eating them right away. Instead, they stored them on the bank of the creek, and fished some more.

That behavior provides a glimpse into a wolf's mental processing, Gable said. "It somehow knew that there were going to be more, so, it might as well go get fish while the fishing was good, and then come back later to the fish after he had gotten what he could."

A first for freshwater fishing

Scientists have known for a long time that wolves in coastal habitats in British Columbia and Alaska eat spawning salmon. But this is the first time similar behavior with hunting freshwater fish has been detailed.

"Given the impressive adaptability of wolves to find food, it is not entirely surprising," said project adviser Joseph Bump.

But wolves are elusive, he said: "Especially in the densely forested areas of northern Minnesota, you have to either be in the right spot at the right time or have access to GPS-collar data."

Those collars have helped shed new light into wolves' secretive lives in the dense boreal forest of northern Minnesota. Researchers mapped 68,000 GPS locations the packs visited just this past summer.

Among their major findings, so far:

All these findings help confirm what scientists have understood for a long time: Wolves are highly adaptable creatures, which is why they've been able to thrive in so many different habitats, from North America to Europe to Asia.

Still, he admitted it's exciting to confirm behaviors scientists have suspected, especially in wolves in Minnesota that haven't been studied as intensively as their counterparts in Yellowstone National Park and elsewhere.

One of the remaining details Windels hopes to tease out is the complex relationship between wolves' predation on beavers, deer and moose and the impact it has on their populations.

Voyageurs is unique in that it has one of the densest populations of beaver in the region. It also is one of the only places in Minnesota where the moose population is holding steady. In other parts of northeastern Minnesota, moose have declined sharply in the past decade for a host of reasons, including disease and other health-related causes, but in part because of wolf predation.

It's still too early to make a direct tie between Voyageurs' steady moose population and its abundance of beavers for wolves to feed on, Windels said. But "this is a great opportunity for us to really get at that question just because of the of the density of beavers that we have here that creates a unique laboratory where we can actually start to see how that dynamic plays out."

In the meantime, the wolf research at Voyageurs has been getting a lot of attention. A recent Facebook post mapping the different wolf pack territories in the park has drawn over 500,000 views, Gable said.

"That's really a satisfying part about doing all this is to share what we're actually finding with people, and to see how excited people are about the work that we're doing."

I also love and value this project because the wildlife deserves all the support and respect.
Congratulations.

Thank you Margarida for reading and replying my friend :)

Permalink Reply by MARGARIDA MARIA MADRUGA on September 11, 2019 at 3:20pm

Thanks for the wonderful information on the wolves here. I appreciate it and love it!

Permalink Reply by Mystic Wolf on February 19, 2020 at 6:12pm
I love the wolf pictures here. I hope they continue to grow and spread out in California, Montana, Washington, and elsewhere.

Thanks so much, SunKat! I love reading information on the wolves.