Who’s Afraid of the Big Bad Wolf? A Fearsome Beast in Legends and Tales Around the World

There are many stock characters that are present in folk stories, fairy tales, and legends from all over the world. However, few are as constant as the figure of the Big Bad Wolf, a giant predator which would devour his victims in a single bite. Appearing in many cautionary tales – stories that are created to warn people from real danger – the figure of the wolf became the most famous archetype of menacing predatory antagonist.

Lessons have long been passed through oral tradition and one way to secure people’s interest is through stories. The fear of wolf attacks was a very real problem during Medieval times in Europe and many other regions, especially in smaller settlements surrounded by wilderness. For a very long time, the wolf was a symbol of power, danger, and ferocity.

One of the first known folklorists was a slave and storyteller named Aesop, believed to have lived in ancient Greece between 620 and 564 BC. Being mentioned by Herodotus and Plato, Aesop’s fables were quite famous. They came from various origins and many were attributed to him without actual proof of authorship. Nonetheless, out of the many stories about wolves, there are four that eventually became associated with the figure of the Big Bad Wolf. “The Boy Who Cried Wolf ” is one of them, telling of a shepherd boy who repeatedly tricks the nearby villagers into thinking a wolf is attacking his flock. Eventually they get tired of the boy’s lies and when the wolf shows up for real, no one believes the boy and the sheep are eaten up. In some versions, it was the boy who was eaten instead. This story is often brought up in discussions on  children’s development and the mechanics of lying  as a warning on the dangers of raising false alarms and constant lying; many adaptations can be seen in different media.

Also attributed to Aesop, albeit as a variant of one of the Greek folklorist’s tales written by La Fontaine between 1668 and 1694, is the story of The Wolf and the Lamb. Originally ‘the cat and the cock’, a lamb questions a wolf why he wishes to take his life. The lupine makes many accusations, all which the young lamb rebuke and prove to be impossible, until the predator loses his patience and finally has the lamb for supper - just because he could. Wolves and lambs were often associated, which makes sense given how often wolves would attack livestock – especially ones that are easier to take down - such as lambs. 'The Wolf and the Lamb’ by Jean-Baptiste Oudry. ( Public Domain )

The story of the  Wolf and the Kids came along in the 1st century. In this story, a mother goat left her kids alone, warning them to not open the door to strangers as the wolf was about and could eat them. Eventually the wolf manages to fool the kids and the youngest is the only one to survive. It rushes to find its mother and when she gets back she finds the wolf fast asleep after devouring the other younglings, completely unable to move. So, the mother goat cuts open the wolf’s belly to find her children survived the ordeal. She rescues them then fills the beast’s stomach with stones and throws him into the river. Later on, the Brothers Grimm would write the most widespread version of the story in 1812, first with five kids and later a revised version with seven kids.

Misattributed to Aesop, there’s also the famous story of “ The Wolf in Sheep’s Clothing ” in which a wolf finds a sheepskin and accompanies the flock to the pasture, managing to fool the shepherd. In the original version by the 12th-century Greek rhetorician Nikephoros Basilakis, the wolf is shut up in the fold with the rest of the sheep and ends up slaughtered along with them. In comparison, modern versions of the tale end with the wolf having its supper,  eating the sheep .

By the 10th century, the story of the Wolf and the Kids had a new variant in French and Italian regions, which would be the prototype for the tale of Little Red Riding Hood. In the early versions, the wolf was sometimes a  werewolf, making it relevant to the werewolf trials at the time and aggregating the sexual and cannibalistic undertones that would remain in many versions of the tale.

In 1697, the French author  Charles Perrault  collected these stories and whilst removing the cannibalistic and most of the explicit content, he kept the sexual connotations and added the memorable red hood – which many scholars suggest might also symbolizes a girl’s first menstruation and becoming a woman. More than a century later, the  Brothers Grimm  came across with a retelling of this story by Jeanette and Marie Hassenpflug and made it more family-friendly, stripping the remains of the sexual content and adding a happy ending reminiscent to the Wolf and the Kids — a tale that they included in their book alongside Little Red Riding Hood. One of the most famous fairy tales of the world, Little Red Riding Hood tells the story of a girl sent off to visit her grandmother who lived in the woods; in the Grimm’s’ version her mother ordered her to stay on the path, which she disobeys. She meets up with a wolf on her way and the cunning animal suggests the girl go pick some flowers for the old lady, to which the naïve child complies. In the meanwhile, the wolf hurries to the grandmother’s house and swallows her whole. It then waits for the girl to arrive, while disguised as the grandma. A hilarious conversation ensues about how weird the “grandma” looks and the wolf ends up eating the little girl as well. That was where Perrault’s version ends, but in the Grimm’s’ a hunter (or a woodcutter) arrives and saves the two females by cutting the wolf’s belly open, rescuing the victims, and then filling the beast’s stomach with stones before throwing it into the river - just like the other tale.

Some also associate the story of Red Riding Hood with circles, especially solar circles, as the bright red cap could represent the sun being eaten by the “terrible” night (the wolf). This also draws association with the legendary wolf  Fenrir from Norse mythology, which will eventually devour the sun during Ragnarok. The banter between the wolf and the girl also has analogies to the Norse Þrymskviða from the Elder Edda; in which a giant had stolen Thor’s hammer and demanded Freyja as his bride for its return. The gods dressed Thor as a bride and the giant notes the “woman’s” unladylike eyes and ways of eating and drinking -- just like Red Riding Hood notes differences in the wolf’s appearance.

There is yet another explanation for the famous scene of the wolf dressing up as the grandmother: back in his French court days, Perrault met a man called François-Timoléon de Choisy, the youngest son of a wealthy couple that had associations with the household of the Duke of Orléans and Anne of Austria.  By the whims of his mother, de Choisy was raised like a girl until he was 18. This pleased the king, who became the boy’s godfather. de Choisy dressed as a man for a while, but soon resumed wearing women’s garbs. He delighted in the most extravagant toilettes and dresses; and in a time when women were taught to avoid engaging even in conversations with men, de Choisy used it in his favor to seduce women. Very elegant and polite, often mothers would send their daughters to have etiquette classes with him, but eventually one of the girls ended up pregnant. When Perrault compiled the stories for his book he was trying to instill some basic etiquette for proper ladies and warning them against seemingly inoffensive ‘wolves’.

And the last famous story associated with the Big Bad Wolf would finally get its first written adaptation in 1886, included in The Nursery Rhymes of England by James Orchard Halliwell-Phillipps. It was brought to prose form by Joseph Jacobs in 1890 in his book English Fairy Tales , but versions date back as early as 1840 and the story is known to be much older than that:  The Three Little Pigs .

The story begins with the title characters being sent out into the world by their mother to “seek out their fortune”. The first little pig builds a house of straw, but a wolf blows it down and eats him. The second pig builds a house of sticks, which the wolf also blows down then eats him. Each exchange between wolf and pig features ringing proverbial phrases. The third pig builds a house of bricks. The wolf fails to blow down the house. He then attempts to trick the pig out of the house by asking to meet him at various places, but he is outwitted each time. Finally, the wolf resolves to come down the chimney, whereupon the pig catches the wolf in a cauldron of boiling water, slams the lid on, then cooks and eats him. Some of more modern versions had the first two pigs managing to escape the wolf’s clutches and seeking shelter with the next one. The wolf blows down the straw house in a 1904 adaptation of the fairy tale Three Little Pigs. ( Public Domain )

With the advent of the movies and other media, the image of the Big Bad Wolf cemented his worldwide fame with the Walt Disney’s animation The Three Little Pigs in 1933, also introducing the Wolf’s theme song, “ Who’s Afraid of the Big Bad Wolf? ” which would become a hit. The short would eventually lead to many sequels and launched him as a comic book character in Walt Disney’s Comics and Stories in 1941. In fact, the public acclaim and the accolades of the Big Bad Wolf short gave Walt Disney the courage to invest in his first long featured animation, Snow White and the Seven Dwarves .

The Wolf Among Us Today

From a proverbial warning about strangers and sexual predators, the wolf eventually became a prominent figure in our popular culture - as both an antagonist and a protagonist. Some of the most famous examples include Bill Willingham’s comic and video games series Fables / The Wolf Among Us , in which the Big Bad Wolf was reformed and became the protector of a community of fairy tales; and ABC’s Once Upon a Time, in which the wolf is actually a werewolf… and also Red Riding Hood herself!

The fact is, despite how our cities have grown to the point of hardly having anything to fear of wolves – and many species are endangered – there is this fear almost embedded into our collective minds of this beast of yore still stalking, just waiting to gobble us up before we could cry “The Wolf is coming”. 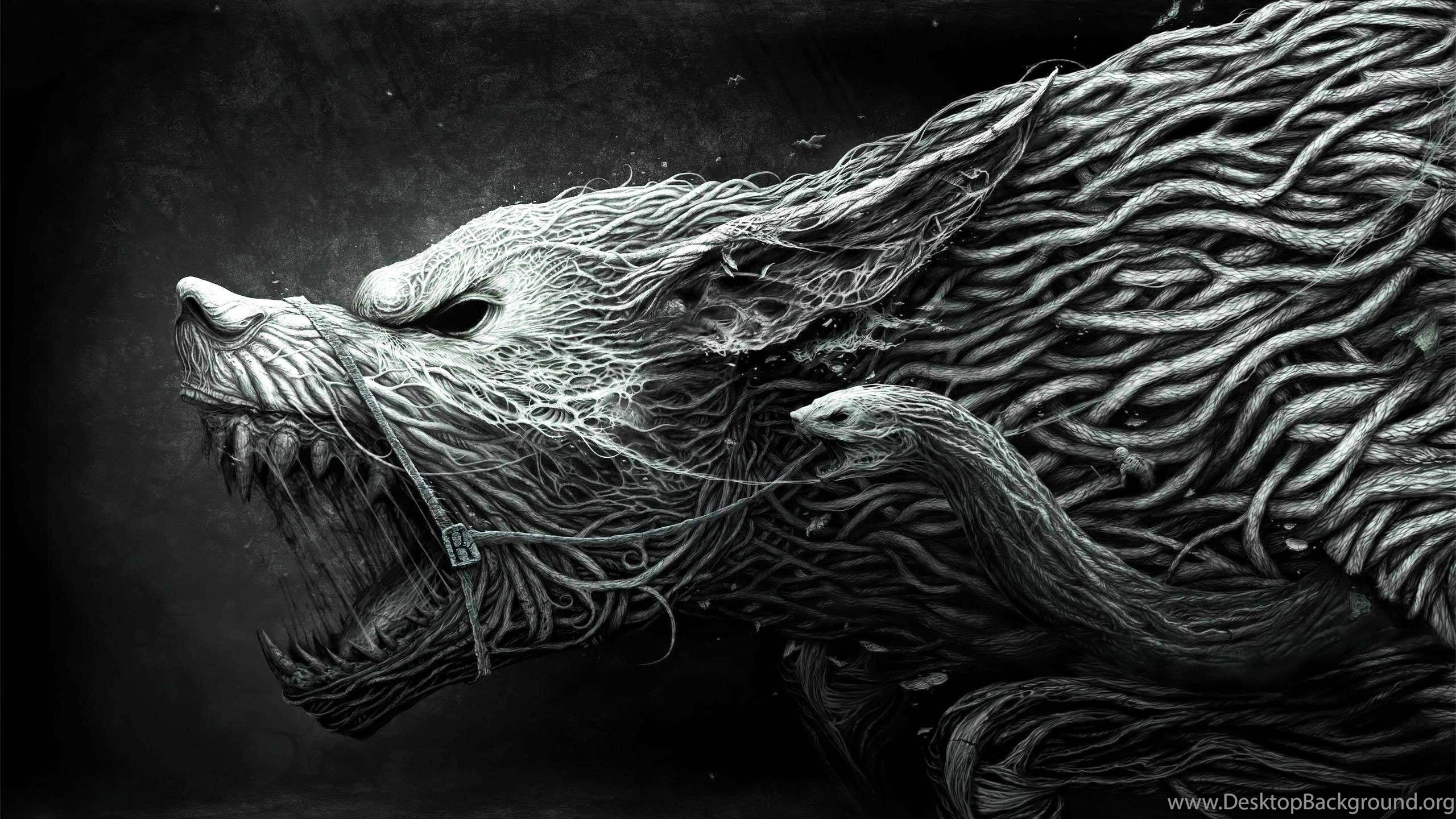 Permalink Reply by MARGARIDA MARIA MADRUGA on September 11, 2019 at 2:59pm

It was good to remember the childhood times.
I never saw the wolf as "the evil wolf".
To me he is a great protective dog.

Ever since I was a child I absolutely loved wolves. I went to the Library and read lots of books on wolves and enjoyed every picture of them. It hurts now to have the ranchers, people who just want to kill them. and the state wanting these kills is disheartening. When I first started meditating and searching for my totem animal or power animal a black wolf always came to me. Her name is Quimatahoya.