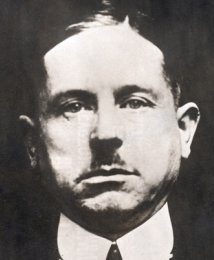 German serial killer Peter Kürten, known as the "Dusseldorf Vampire", murdered at least nine people before surrendering to police in 1931.

Born in Germany in 1883 to an impoverished and abusive household, serial killer Peter Kürten began murdering people in 1913. In the publicity surrounding his killings he became known as the "Dusseldorf Vampire." He surrendered to police in 1931 and was executed shortly thereafter.

Peter Kürten was born into extreme deprivation and poverty in Köln-Mullheim, a suburb of Cologne, Germany on May 26, 1883. The eldest of 13 children, his father was an alcoholic with sadistic tendencies, who brutalized both wife and children, in the one room apartment that they all shared, for the duration of Kürten's childhood.

This daily subjection to sexual violence must have had an immense influence on the boy who, aged 9, formed an unhealthy relationship with a dog-catcher living in the same building, who introduced him to the practice of bestiality, carried out initially on dogs.

Kürten claims to have drowned two school friends at the age of nine. Having pushed one overboard, the second dived in to his rescue: Kürten held both under water until they had suffocated. At the time the event was dismissed as a tragic childhood accident.

As Kürten matured sexually, his bestiality extended to sheep, goats and other farmyard animals, with the teenager discovering particular pleasure when the animal was stabbed during intercourse.

By 1899, at the age of 16, Kürten had progressed to petty crime, and ran away from home to escape the continuing violence. Shortly after his departure, his father was arrested for incestuous relations with Kürten's 13-year old sister, and he was jailed for three years.


Kürtens petty crime soon led to the first of many short prison sentences, for various misdemeanors, that punctuated his existence over the following years. The appalling conditions within the prisons confirmed his sadistic tendencies, which he now transferred from farm animals to humans.

During his periods of release between prison spells, Kürten was responsible for various sexual assaults, but his first documented murder victim was 10-year-old Christine Klein. Klein was sexually assaulted and stabbed in her home in Cologne, on May 25, 1913, while her parents worked in their pub below her bedroom.

Her uncle, who had had an argument with her father, immediately came under suspicion, and Kürten , who returned to the scene of the crime the next day, was enthralled by the horror the killing had invoked in the locals, especially when the sexual assault came to light. The innocent uncle was cleared of the murder, given the lack of evidence, but Kürten followed his trial with interest, whetting his sadistic appetite for suffering in others.

Kürten was called up for military service following the start of World War I, but military discipline did not suit him, and he deserted from his barracks. He was jailed when captured, and remained in prison until 1921, his longest sentence to date, and his rage at this injustice intensified.

Following his release from prison, he moved to Altenburg, where he met and married a former prostitute, who had been jailed for the murder of her fiancé. He spent the next four years living a life of relative normality and found work as a molder (his father's profession), even becoming active in the trade union.

This normality was short-lived, however, and Kürten found himself inexorably drawn to Dusseldorf, where his criminal tendencies escalated, from petty crimes to arson attacks, and then to sexual attacks, four of which are certainly attributable to him in the period up until early 1929. One unlucky victim, Maria Kuhn, survived repeated stabbing by Kürten that caused 24 individual wounds.

This crime escalation reached its peak in the killing of 9-year-old Rosa Ohliger, on February 9, 1929. She was stabbed 13 times by Kürten, who climaxed during the brutal attack, before he dumped her body under a hedge, then attempted to set fire to her remains to destroy the evidence.

Rosa was the first of a number of victims that included young girls, women and even men, over the next 15 months. A 45-year old mechanic named Scheer followed, five days later, the victim of multiple stab wounds. Kürten again returned to the scene of the crime to relive the moment, even speaking to detectives about the murder.

Sensationalist German press covered the attacks extensively, and when they discovered that investigators believed that the attacker might be drinking the blood of his victims, he was immortalized in print as the "Vampire of Dusseldorf." The search for the killer received a major setback, however, when a learning-disabled individual, named Stausberg, accused of similar crimes, inexplicably admitted to all of the so-called vampire killings. He was committed to an asylum, and the police were convinced that the case was solved.


By August 1929 it became apparent that their conviction was premature; a series of strangulations and stabbings occurred, culminating in the brutal fairground murder of foster sisters, 5-year old Gertrude Hamacher, and 14-year old Louise Lenzen. The next day Kürten assaulted another woman, Gertrude Schulte, who survived the attack, and gave police a description of her attacker as a pleasant-looking male, around 40 years old.

Attacks became more frequent, and were widely publicized, throwing the population of Dusseldorf into a panic as the victim count rocketed. Ida Reuter was raped and killed in September, and a servant girl named Elizabeth Dorrier was battered to death on October 12, 1929. Two other victims, named Meurer and Wanders, were fortunate to survive brutal hammer attacks, but the very nondescript appearance of Kürten, as described by his victims, made it difficult to narrow down the list of potential suspects.

Kürten enjoyed the mass hysteria and horror enormously, feeding off the press attention, even going so far as to contact a newspaper, on November 9,1929, with a map detailing the position of the body of his latest victim, Gertrude Albermann, a five-year-old he had stabbed to death two days before, dumping her body under some rubble.

Kürten 's attacks continued into that winter, and the spring of 1930, but none were fatal, serving only to escalate the horror. Harrowing survivor attacks provided lurid copy for newspapers, an antidote to the growing economic deprivations being inflicted by the Great Depression. Public condemnation of the authorities, for failing to catch the killer, was widespread.

May 14,1930 saw the start of a chain of events that would result in Kürtens eventual capture. He offered a young unemployed woman, Maria Budlick, somewhere to stay, and took her to his apartment, hoping to have sex with her. When she refused, he agreed to find her somewhere else to stay, but on returning her to the train station, he took her into the nearby forest, and raped her before letting her go.

Throughout Kurten’s reign of terror he maintained a fond attachment to his wife and, recognizing that he would eventually be caught for the rape of Budlick, now that the police knew his identity, he devised a plan to ensure her financial security following his arrest. He confessed to her that he was the "Dusseldorf Vampire," detailing all the killings and attacks, and he insisted that she would be paid a large reward for turning him over to the authorities.

On May 24,1930, Frau Kürten reluctantly did as he her husband advised, and took the police to their designated rendezvous site, a local church, where Kürten surrendered quietly.

Once under arrest, Kürten provided an astonishingly detailed account of his string of crimes to Professor Karl Berg, a distinguished psychologist, who later published the confession in a book entitled The Sadist. He claimed 79 individual acts of crime in all, and went to great lengths to convince the authorities of his guilt, perhaps in the hope that his full cooperation would ensure the maximum financial benefit for his wife. His memory was nearly photographic, and his recollection of each offense obviously provided him with great pleasure; less so the attending stenographers.

Kürten's trial commenced on April 13, 1931, on charges including nine murders and seven attempted murders. To outward appearances a successful businessman in a well-tailored suit, he initially retracted his extensive confession, claiming that he had sought only to ensure his wife's financial security.


However, exhaustive questioning by the examining magistrate, and a damning litany of evidence, over the subsequent two months, caused him to eventually admit guilt while under interrogation. In an emotionless voice, Kürten claimed that his childhood, and the German penal system, was responsible for releasing his sadistic tendencies, and he showed no remorse for his crimes.

The jury took only 90 minutes to return a verdict of guilty on all counts, and Kürten received nine death sentences. He was executed by guillotine on July 2, 1931, in Cologne, Germany.

His early life may have released his tendencies, but it is my belief he was a born psychopath.  It would have come out at some point, anyway.