The disappearance of 8 university students, into the Ural Mountains, 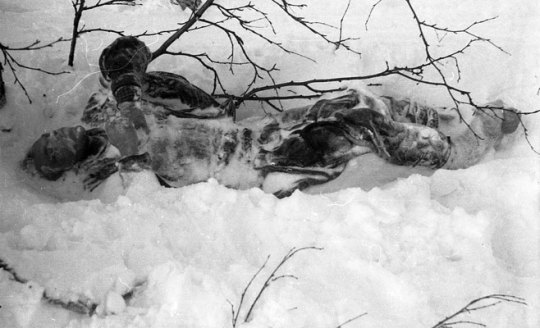 In January of 1959, 23-year-old Igor Dyatlov led a group of eight young Soviet hikers, comprising seven men and two women and mostly university students, into the Ural Mountains, attempting to reach Mt. Ortorten from the small settlement of Vizhai. It took more than three months to locate all nine of their bodies. They were found about six miles away from their destination, in a forest almost a mile away from their campsite, without their skis, shoes, or coats in approximately -30 degrees Fahrenheit weather. Two of them had fractured skulls, two more had major chest fractures, and one hiker was missing her tongue. Soviet investigators listed the cause of death as “a compelling natural force,” and abruptly closed the case not even a month later.

Here’s what we know about the incident. Six of the skiers died of hypothermia and three died of injuries. They died separately — two of them were found under a cedar tree near the remains of a fire, while three others were found in intervals of hundreds of feet from the tree, and four more were in a ravine another 250 feet away. The two under the tree had burned hands. The four in the ravine weren’t found until May 4, three months after the incident. The dead seemed to have donated some of their clothing items to the living; Ludmila Dubinina’s foot was wrapped in a piece of Yuri Krivonischenko’s pants, while Semyon Zolotaryov was found wearing Dubinina’s hat and coat, and some garments had cuts in them, as though they were forcibly removed. Consistently, there were eight or nine sets of footprints in the snow, accounting only for the skiers and not suggesting another party’s involvement (on foot, at least). There was no sign of struggle or of any other human or animal approaching the campsite. There was a snowstorm the night of February 2, which is when it was determined, via their diaries, that they died.

After the first five bodies were found, a legal inquest began, eventually determining that the cause of death was hypothermia. The deaths seemed kind of straightforward at first. Sure, these dead were in various stages of undress, including one in his underwear, but this was explained away as “paradoxical undressing,” which happens in about 25 percent of hypothermia victims, as the hypothalamus malfunctions and body temperature seems to rise when it’s really dropping. But then it got super weird.

The skiers’ badly damaged tent, it was determined, had been cut open from the inside, and all of their stuff was still in it. Why were they dead of exposure if they’d had access to their winter gear BEFORE going out into the freezing winds? To all appearances, they appeared to have left the tent out of their own volition and in a hurry. Bizarrely, Zolotaryov fled the camp with his camera but not his gear. As well, Rustem Slobodin — who, along with Dyatlov and Zina Kolmogorova, seemed to have died in a pose indicating he was trying to return to the tent — had a small crack in his skull, but it was ruled that the elements were what killed him, not the fracture. No external wounds were discovered.

Things got really shaken up when the four bodies in the ravine were found and examined; both Dubinina and Zolotarev had fractured ribs, while Nicolai Thibeaux-Brignolles had a major skull fracture. One of the investigators compared the force required to injure a human so severely to that of a car crash. The injuries were absolutely not caused by force exerted by another human being. Once again, no soft tissue damage was observed, as though the skiers’ bodies were crushed by pressure. When Dubinina was found to be missing her tongue, the theory of another party’s possible involvement must have arisen again — Who would do this? Why? Or did another skier from the group cut it out? And where did it go?  — but there were absolutely no indications of other people having been nearby, apart from the other travelers in Dyatlov’s group, not even the native Mansi people sometimes known to inhabit the area. And, perhaps most baffling of all, some of the skiers’ clothing was found to contain significant levels of radiation. Finish the article here or watch a short documentary here. There was even a movie made about it, the IMDb entry can be found here.

This movie is on Netflix and Amazon Prime.  I do believe.  So I'll be watching it later.  Thank you Kyst.  I bet you it was the Yeti!!  It's that huge Ape like White man beast thing right.