Cho Ku Rei indicates strength and power. This Reiki symbol is used in most and all healing to increase the power of all other symbols used. It promotes action and movement and hence helps in healing. As the power symbol represents energy that with a clear focus, direction, and purpose, this Cho Ku Rei Reiki symbol has many benefits. The intention and positive visualization of the healer is must otherwise they are just lines.

This Reiki symbol indicates the power of the whole universe for the purpose intended.

Cho Ku Rei literally means ‘by the Emperors Command’, that means 'what must be shall be".

Used in healing this Reiki power symbol can work miracles in curing and healing types of illnesses, mental, psychological, and physical as well as karmic. My healing paintings address many issues which include earth luck as well as heaven luck. Balancing the two worlds, one of physical and other spiritual, leads to complete harmony and prosperity. As all the energy is focused on the particular place where the symbol is used the Reiki symbol paintings can be used for many purposes.

Healing health problems, chronic diseases, and psychological problems can be healed faster with Reiki along with medical therapy. Children, plants, pets, home, car, property, garden in fact anything can be healed from your child's study table to your doormat all can be Reiki charged to welcome good luck, good health, and prosperity. 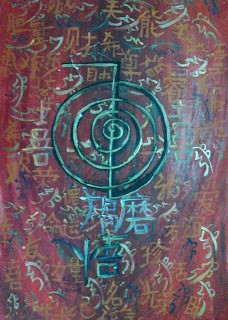 The Cho Ku Rei is written in two forms clockwise and anticlockwise. The clockwise Cho Ku Rei Reiki symbol is used to increase focus and power whereas the anticlockwise symbol is used to remove negativity and protect from harmful energies. A very good protection symbol this Reiki traditional symbol is used in all healing and is an important part of Reiki. Healing Reiki paintings will improve the environment. The healing paintings can be programmed for personal purposes according to your problems and issues to be sorted out. Reiki energy will find its place where it is needed most in your life and sort out every aspect of your life.

The Reiki power symbol is used primarily to connect with Reiki energy at the start of a session and also to help boost the Reiki power whenever it is required during a session.

Some practitioners use it on their own palms and chakras before treating others, to help clear the channels and empower their hands. Using the power symbol over the client’s crown chakra helps create positive energy around them, while using it on the lower back and behind the heart chakra helps seal the energy at the end of the treatment.

Example Uses of the Reiki Power Symbol
Cho Ku Rei is an all-purpose symbol that can be used anywhere and everywhere for anything. Here are a few ways that it can be used.

Empower other Reiki Symbols
Using the Reiki power symbol before other Reiki symbols such as Mental or Emotional Symbol or the Distance Healing Symbol has an empowering effect on those symbols and boosts their effectiveness.

Helps in Spot Treatment
Drawing Cho Ku Rei on a specific part of the body helps in focusing the Reiki energies on that particular spot, helping cure or heal especially acute injuries, but also chronic conditions that have localized effects in the body.

Clears Negative Energies
using this symbol mentally is useful in clearing all the stagnated energies during a Reiki session. Similarly, drawing it on the walls of a room clears the negative energy in the room, and drawing it in the atmosphere around a physical space aids in cleansing the area. Drawing can be physical, such as with paint or a pen, or symbolic with the hand in the air.

Provide Protection
drawing a large Power Symbol in front of a person or on each of their chakras works as a shield and protects the person from negative energies. Reiki works on different levels (physically, emotionally, mentally, or spiritually) and Cho Ku Rei will naturally provide protection on all levels.

Name of the first of the four Usui Reiki symbols. Commonly called the 'Power' symbol in Takata-lineage Reiki (Usui Shiki Ryoho). In some Japanese lineages, the symbol is commonly called the 'Focus' symbol'.
Takata-Sensei translated Choku Rei as 'put the [spiritual] power here', yet it can also translate as something akin to: 'in the presence of the Spirit(s)' or even as 'Direct Spirit'.

There has been some debate over the precise meaning of the jumon
"Choku Rei".

We have to remember that "Choku Rei" is simply a transliteration of the Japanese, and just as in English where (for example) the words 'rite', 'write' and 'right' all have the same sound, so too in Japanese, there are often many words that sound the same, yet are written in different kanji (ideogrammatic characters) and have very different meanings.

In the 'western' lineage of Reiki, we have only been aware of the 'Romanized' written form of this jumon. There was no depiction of the phrase in kanji form. (This is unfortunate, as rather than representing the sound of a word, kanji are directly indicative of the meaning of the word).

When Mieko Mitsui took 'western' lineage Reiki to Japan in 1985 and apparently discovered that 'original' Japanese Reiki had never actually died out as had previously been thought, many people expected they would finally learn precisely which kanji were used to write the jumon, and therefore gain some understanding of the proper meaning of the jumon. But this was not to be the case.

From one prominent source, the Reiki community was to learn that apparently, in Japan, the symbols (rather conveniently, some might think) were not generally used anymore.

[Now, without sliding too far into 'Reiki Conspiracy Theory' mode - it has to be said that if for whatever reason, someone were to make spurious claims about connection/involvement with surviving elements of 'original' Japanese Reiki, then when it came to sustaining plausibility, there would no doubt be numerous minor issues - such as that of jumon-meanings - which would require circumventing...]

However, from other sources, it has since been discovered that both the symbols and their jumon are indeed still used.

Yet it seems, the jumon - were actually presented in written form - are generally not written in kanji characters (which would provide a clear indication of their meaning), but rather in katakana (one of two Japanese phonetic syllabaries used in addition to kanji ideograms*.)

Unlike kanji which allude to the meaning of the words, katakana merely records the sounds of the words.

[*NOTE: some people have commented on how they find it odd that the jumon is written in katakana.
The other syllabary - called hiragana - is used to provide suffixes and prefixes to kanji characters, and to write purely Japanese words, while katakana is used on official documents and to write words of foreign origin. The Reiki jumon it seems is considered by many to come under this latter category - as Reiki only became popular in Japan after being re-introduced from the West, it is considered by many to be a 'foreign import'!]

When written in katakana, Choku Rei looks like this:

Yet, written in a different set of kanji:

[This is one reason some people consider the symbol to be of Shinto origin.]

It has, on a number of occasions, been suggested that Symbol 1 represents a coiled snake with its head raised.

On hearing this, some people have sought to "jump cultures" and attempt to link Symbol 1 to the 'kundalini serpent' of Indian tradition.

However, according to some theories, associated with honji suijaku
(a doctrine of Shinto-Buddhist syncretism), the real forms of kami are actually snakes.

Takata-Sensei translated Choku Rei as 'put the [spiritual] power here', and there is also a possibility (I stress the word 'possibility') that the symbol is a calligraphic stylization of the kanji character Choku itself:

Name of the first of the four Usui Reiki symbols. Commonly called the 'Power' symbol in Takata-lineage Reiki (Usui Shiki Ryoho). In some Japanese lineages, the symbol is commonly called the 'Focus' symbol'. Takata-Sensei translated Choku Rei as 'put the [spiritual] power here', yet it can also translate as something akin to: 'in the presence of the Spirit(s)' or even as ‘Direct Spirit’

Explanation of the symbols very detailed.