The Royal Observatory’s Insight Investment Astronomy Photographs of the Year awards has released its shortlist for the best space pictures of 2018. This year’s line-up includes stunning images of the raging surface of the sun, the Northern Lights, and depictions of galaxies that are light years away.

This is the 10th year that this competition has been running, and they received more than 4,200 spectacular entries from amateur and professional photographers from 91 different countries around the world. Below are some of our favorite images from this year’s competition: 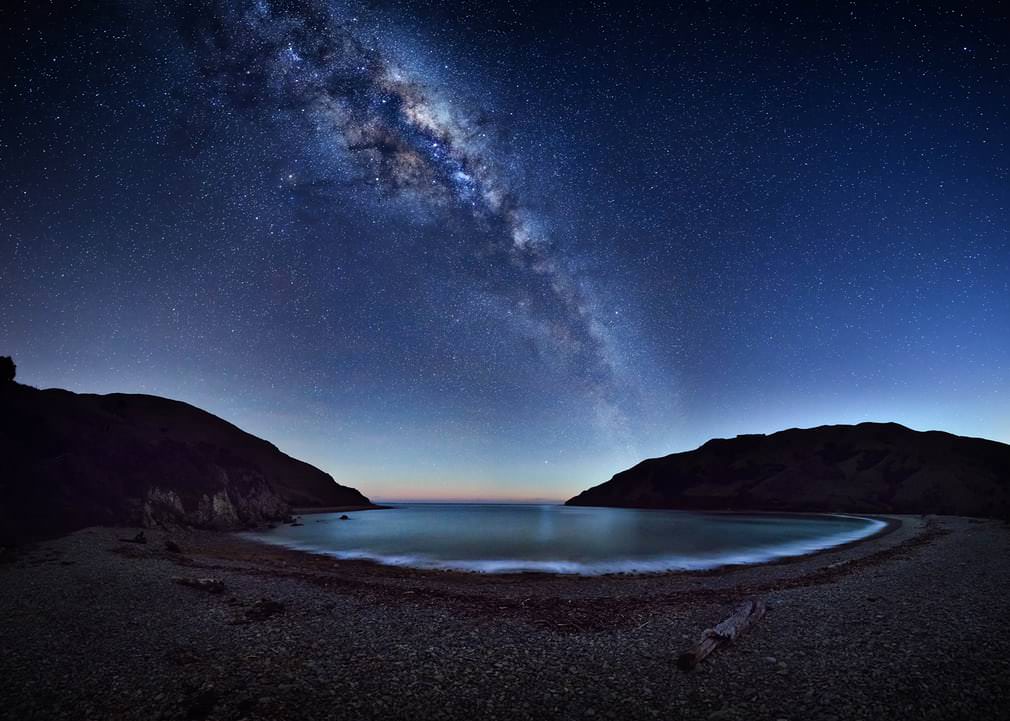 The stunning Milky Way stretches across the night sky reflecting on Cable Bay near Nelson, New Zealand. Gee had to take the photo before the light washed out the sky. A total of 42 images were stitched into a large multi-row panorama to create this image. 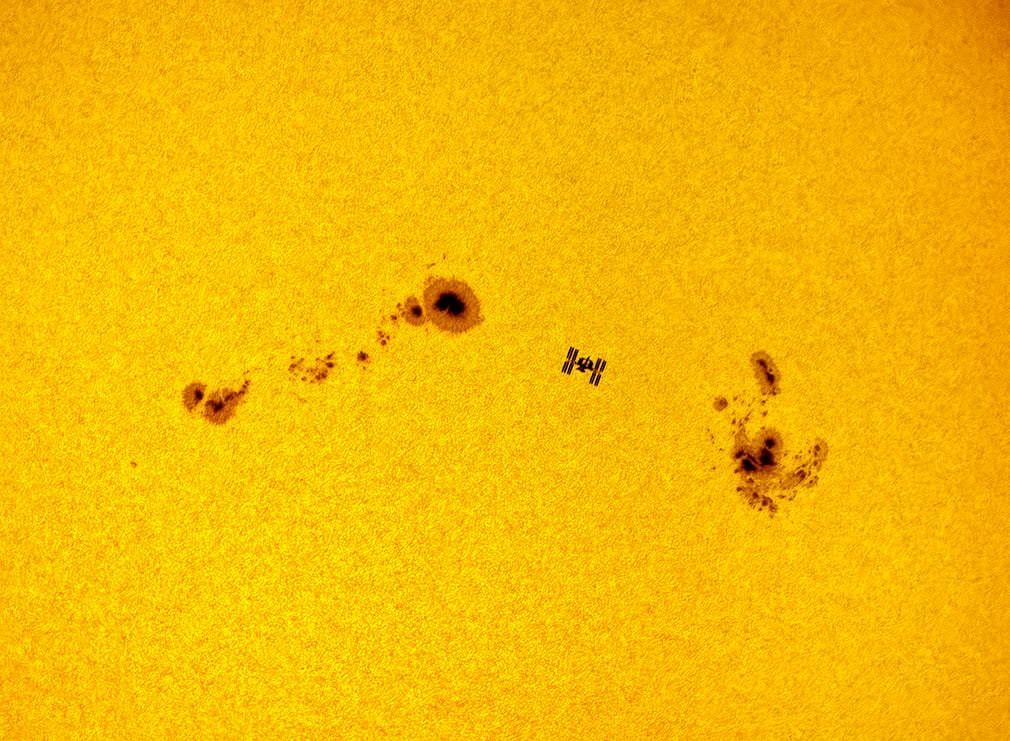 The International Space Station (ISS) was captured between two massive sunspots, the AR 12674 and AR 12673, during its solar transit. The image was taken in Madrid and it took the ISS less than a second to cross the solar disk. 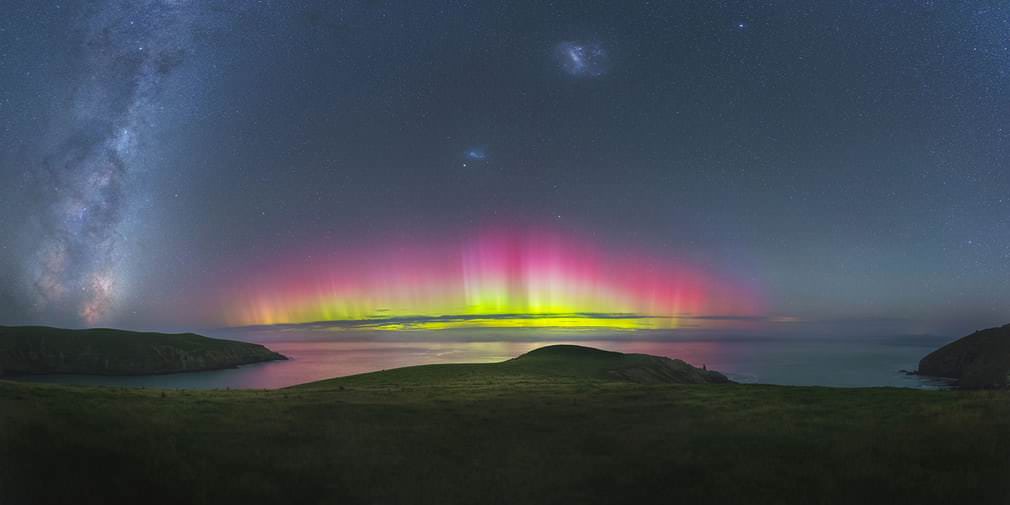 A flared up Aurora reflect bright pink and yellow colors on the water at Southern Bays near Christchurch, New Zealand. The incredible combination of the Aurora’s colors, the green fields, and starry night sky paints a spectacular picture and accentuates the wonders of our galaxy.

Guarding the Galaxy by Jez Hughes 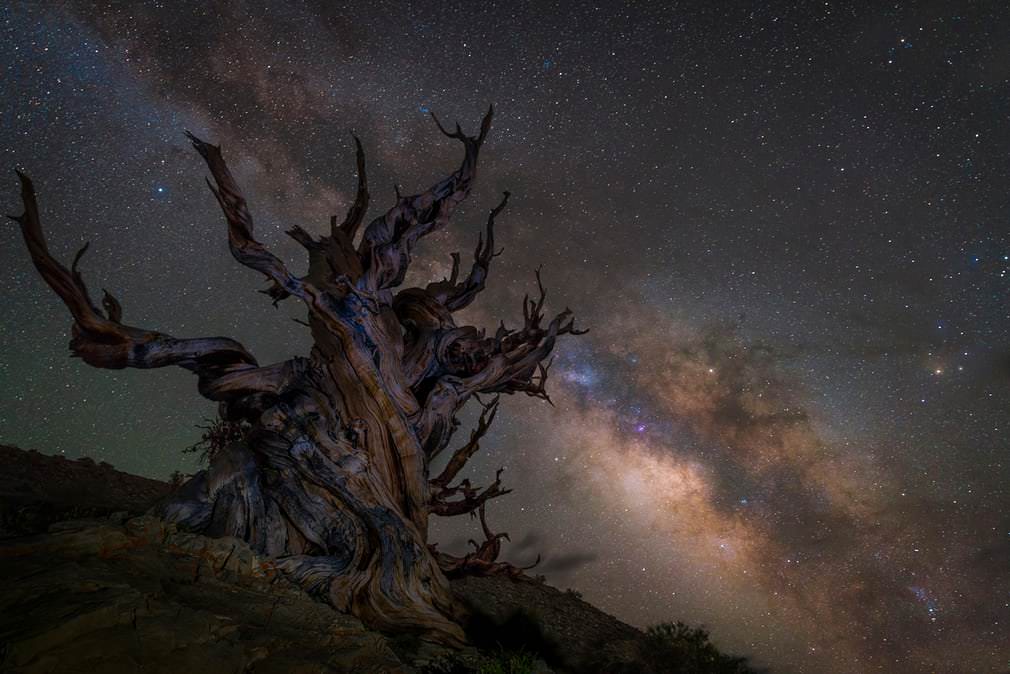 The Milky Way rises over some of the oldest trees on the planet: the ancient bristlecone pine forest, at the Inyo National Forest, in the White Mountains of California. Growing at altitudes of over 10,000 feet, these trees can live for 4,000 years. The high elevation also results in thin air and incredibly dark skies. This particular photograph was taken in between rolling thunderstorms which were passing through the Eastern Sierras, leaving time for only a few exposures. 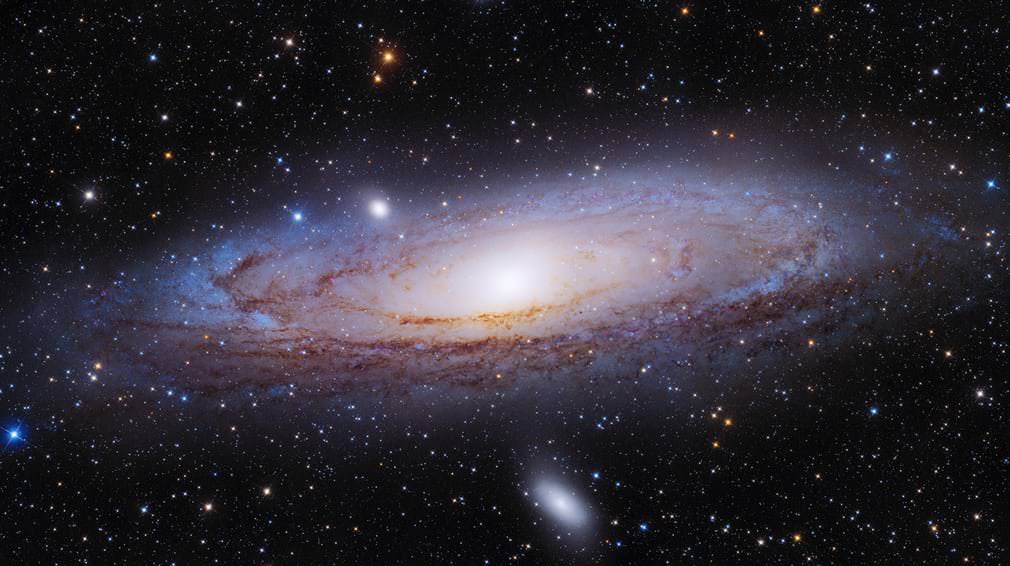 The Andromeda Galaxy has always amazed photographers. The dust lanes and bright star clusters in its arms, the emblematic galaxy shape of it, and the magnificent look of this great star city make it one of the most desired objects to photograph. This photograph was taken using a 200mm mirror and creating a three-panel mosaic. 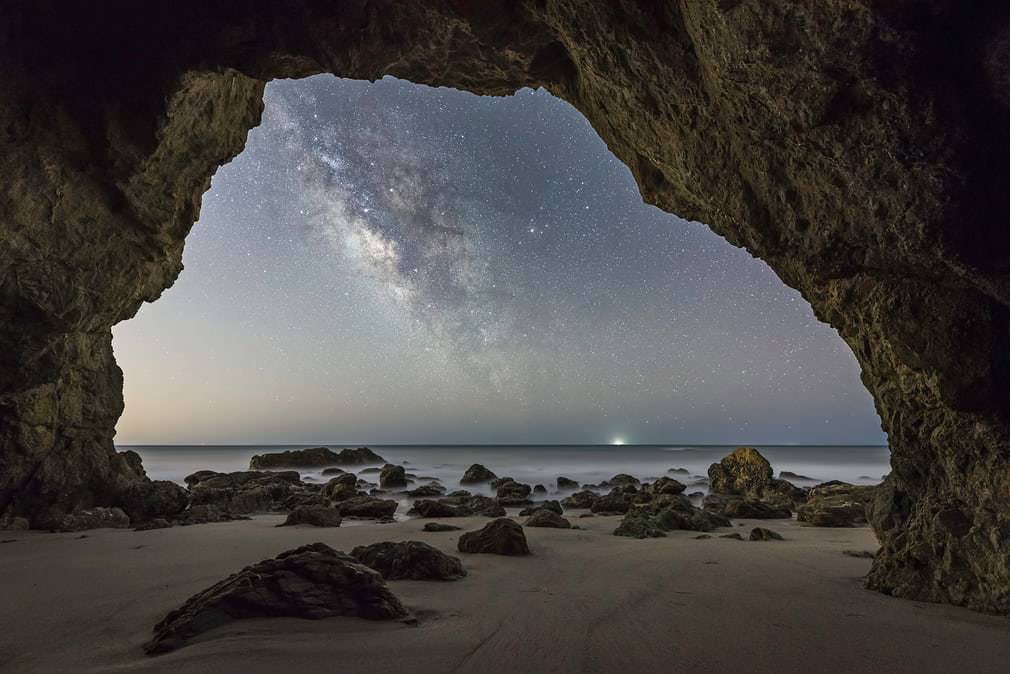 Battling the light pollution in Malibu, California, the photographer brilliantly framed our galaxy, the Milky Way, inside a sea cave, 25 miles from downtown Los Angeles. This image required two exposures; one to capture the details of the cave and one for the Milky Way. Both exposures were taken back-to-back without moving the camera or changing the composition. 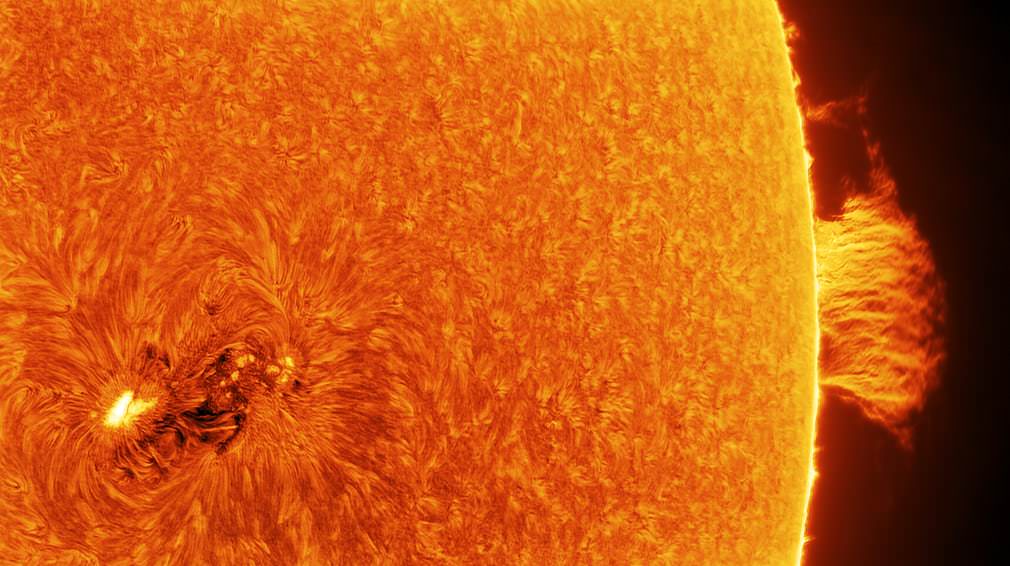 The sunspot AR2665 was one of the most active regions in 2017 – on the right, you can see a phenomenal quiescent prominence extending from the sun. This type of prominence lasts for a very long time and its structure is quite stable. This photograph is a composition of two images: one of the magnificent prominence and one of the sun’s surface. The surface is much brighter than the prominence, so it’s a negative to reveal details of the sun’s chromosphere. 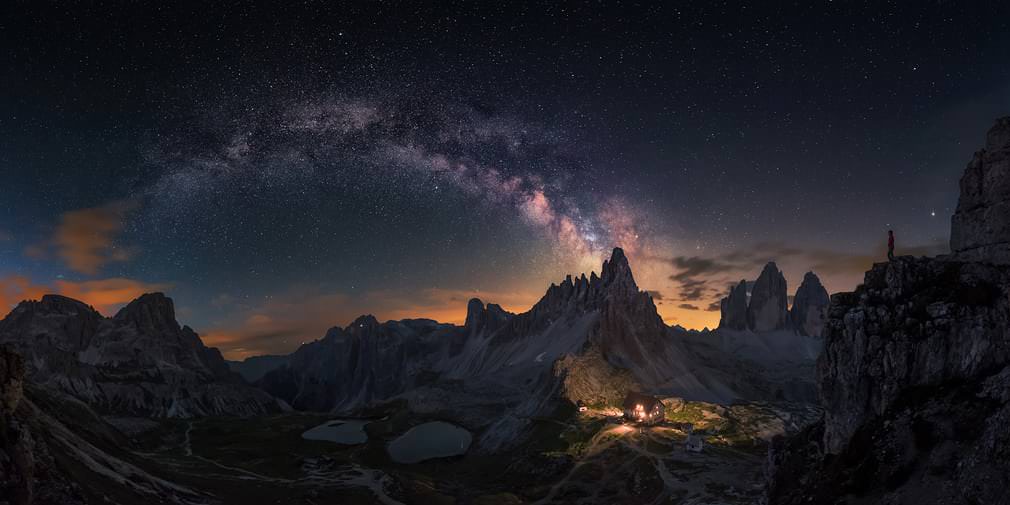 This panoramic photo, made up of eight images, depicts the Milky Way emerging over the rocky Dolomites in Tre Cime on the left, and on the right, the lights from a house illuminate the beautiful terrain.

Thunderstorm under the Milky Way by Tianyuan Xiao 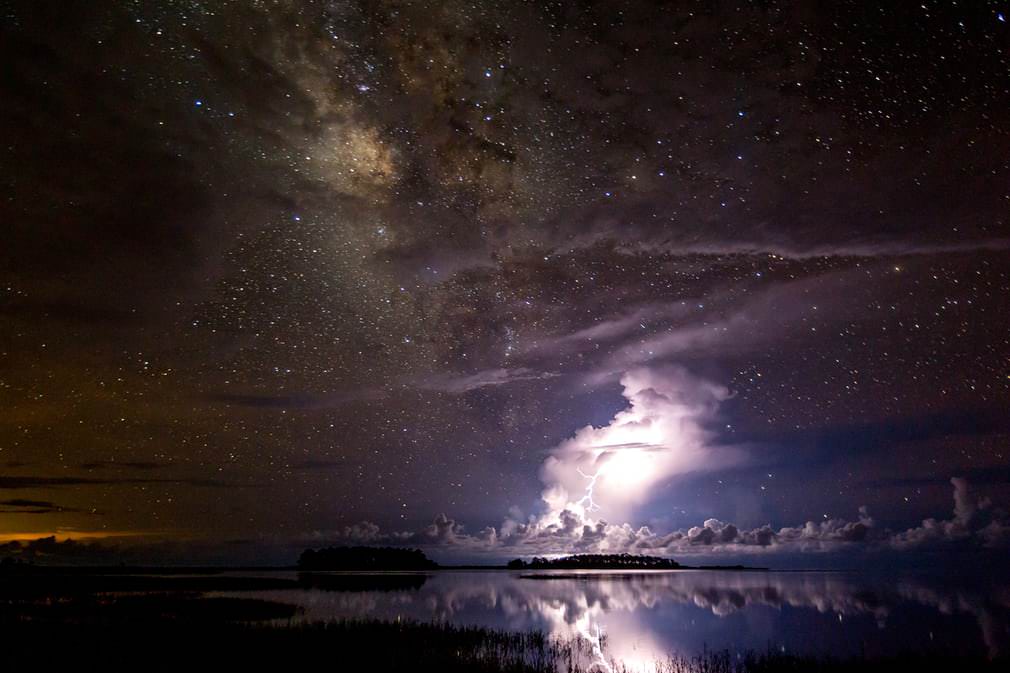 A stunning Milky Way looms over a thunderstorm that lights up the Florida sky. The photographer wanted to show the contrast between the Stable Milky Way and the moving thunderstorm. 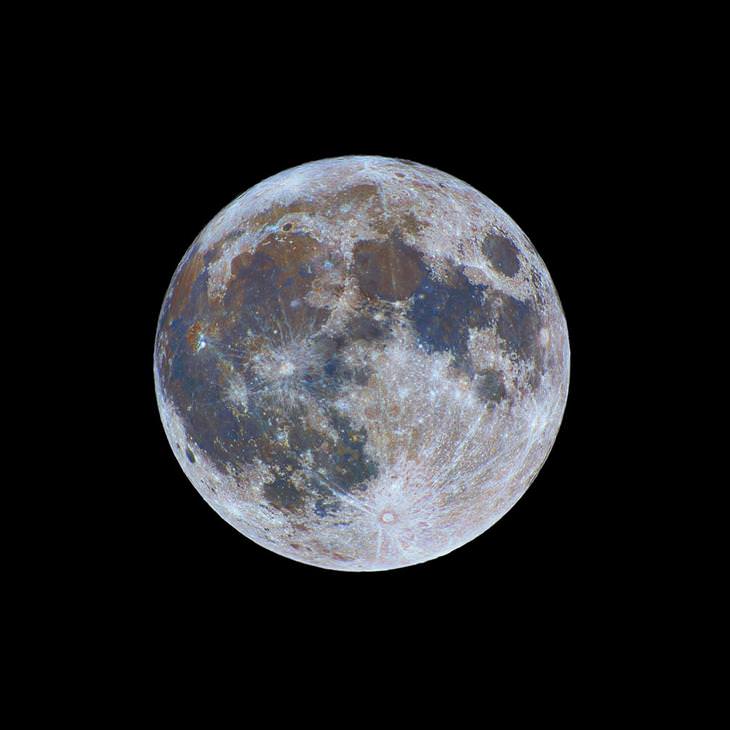 A majestic image depicting the incredible colors and details of the surface of the moon. The photographer applied a similar procedure he used for capturing the solar eclipse and noted that this lit up the full moon like a Christmas tree ornament.

Keeper of the Light by James Stone 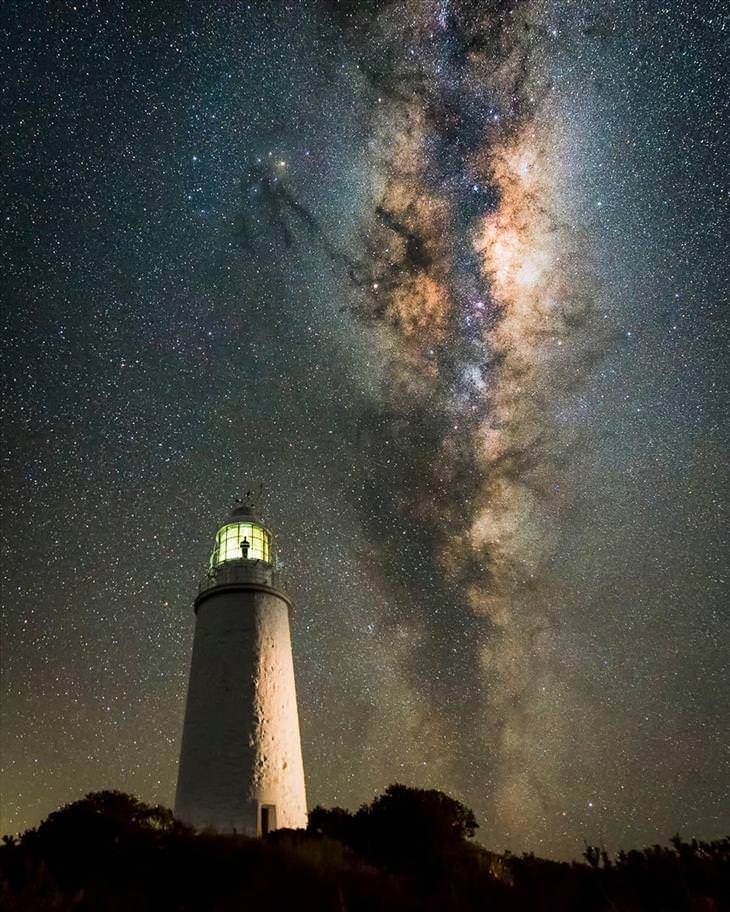 The Milky Way rises way above an isolated lighthouse on the island of Tasmania. The photographer planned his position so that he could shoot the perfect composition, positioning the Milky Way in conjunction with the lighthouse and observing how to best light the tower for artistic effect. 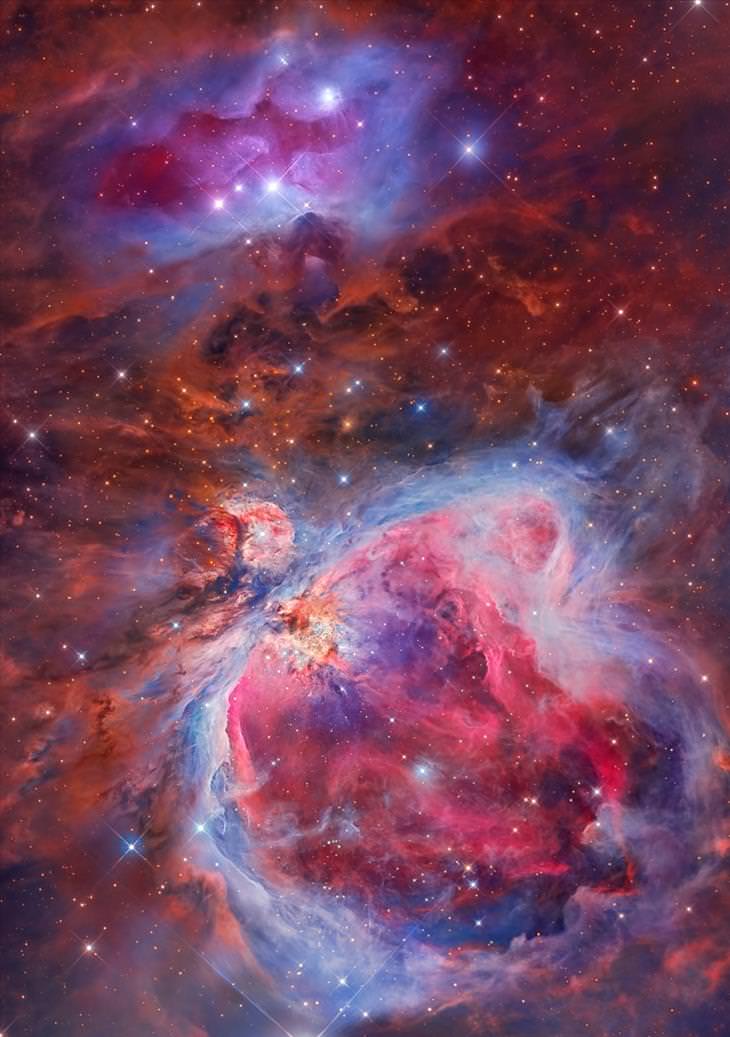 The Orion Nebula is a diffuse nebula situated in the Milky Way, south of Orion’s Belt in the constellation of Orion. It’s one of the brightest nebulae and it is visible to the naked eye during a clear night. It is 1270 light years away from our planet and is the closest region of massive star formation to Earth. It’s estimated to be 24 light-years across and it has a mass about 2,000 times more than that of the sun. This image is the result of the efforts of two astrophotographers using different equipment from their observatories.

Holding Due North by Jake Mosher 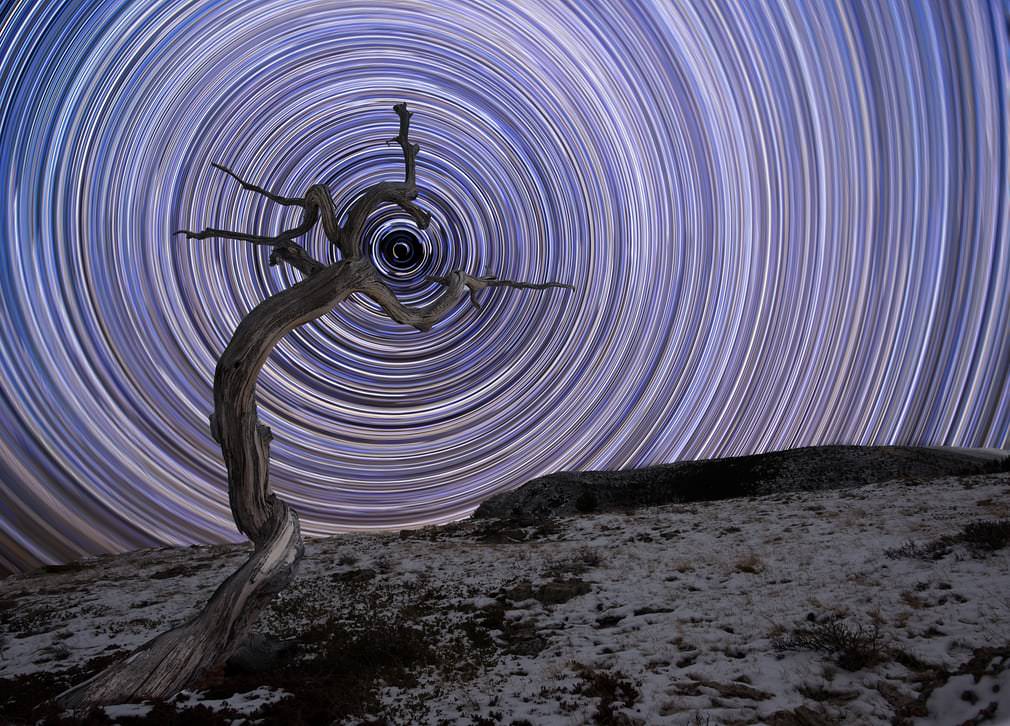 A weathered Juniper tree in Montana’s northern Rocky Mountains is filled with arced star trails and in the center sits Polaris, the brightest star in the constellation of Ursa Minor. It took a number of test frames of long exposures to ensure that Polaris was in the right position, but eventually things lined up and the moon provided enough light to the foreground.

The Eagle Nebula by Marcel Drechsler 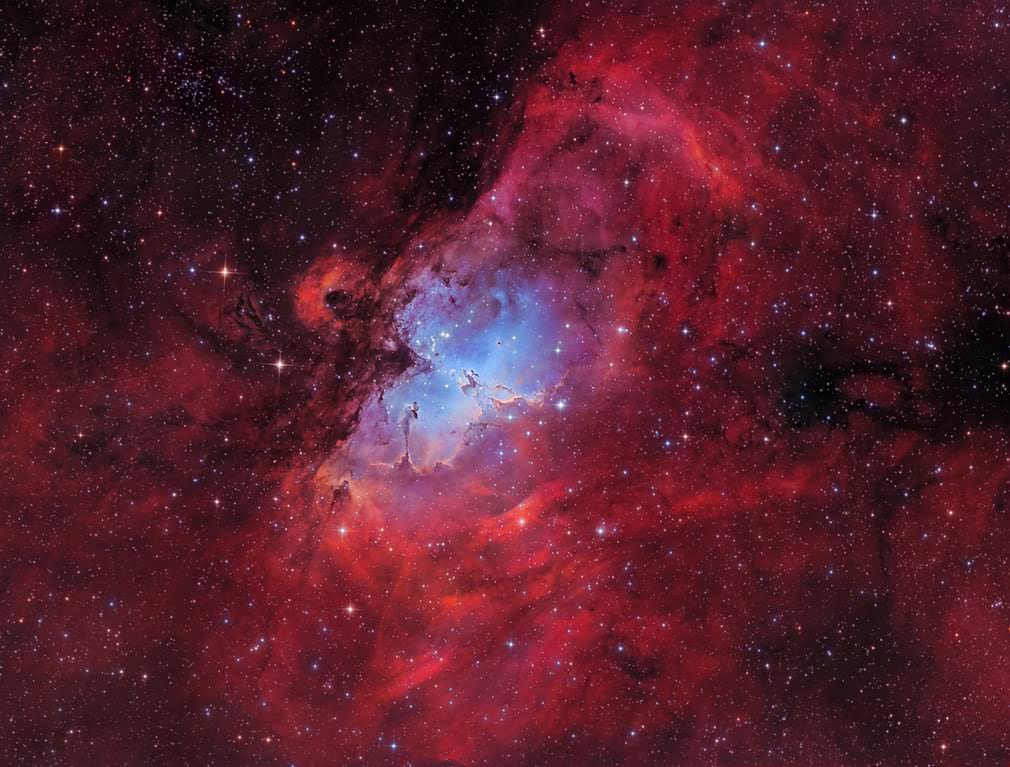 The Eagle Nebula is a young open cluster of stars, surrounded by hot hydrogen gas in the constellation of Serpens and lies at a distance of 7,000 light years from Earth. Taken at the Baerenstein Observatory in Germany, the photograph is a RGB-HA-OIII image and shows off the radiant red and blue colors of the nebula. In the center you can see the famous Pillars of Creation

Yes, dear Rosey, but I can not post in the front page, it does not allow me to do so.

Linda knows about it, but it seems everyone else can, but me, and I do not know why!

Permalink Reply by MARGARIDA MARIA MADRUGA on August 7, 2018 at 9:38am

Thank you, Helela and Margarida!

I am glad you liked it also, Nieve. Are you back form your vacation? Was it wonderful? I am sure it was!

Permalink Reply by Carmen Elsa Irarragorri Wyland on August 23, 2018 at 8:56am

I am so glad you enjoyed it!

I had a feeling you would.

And yes, I am sure we are all welcoming you back, and ready to enjoy your creativity that you so kindly share with all of us!