Believe it or not, haunted dolls are not altogether hard to find. Many people list these dolls for sale online, along with other haunted objects. But what once was a rare and terrifying item has somehow evolved into a marketing ploy. 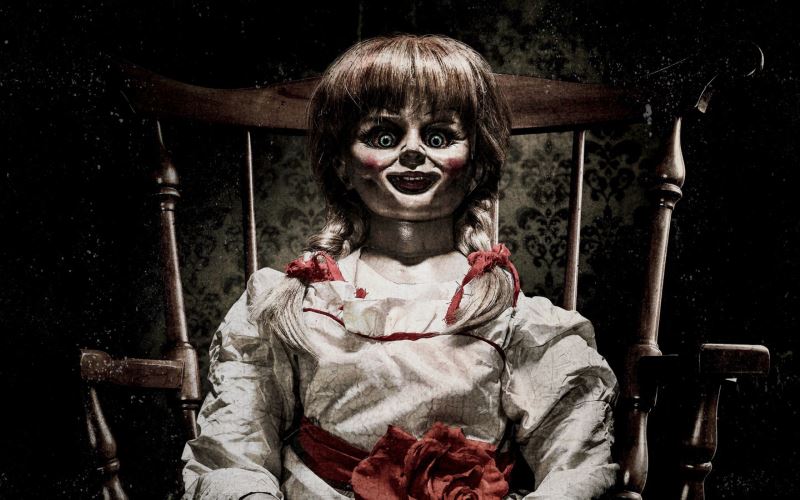 Are there dolls out there that are truly haunted? In short—yes. They may be hard to find, but there are creepy haunted dolls in the world that have a horrific history…and even terrifying abilities.

These dolls have been known to move on their own. Some believe they are possessed by the spirits of demons. One doll is even known to have the ability to cause mischief from afar. There are people in the world who believe that there is no such thing as a haunted doll. These very people often change their minds after encountering dolls such as Robert or Annabelle. Read on to discover more about them and the other eight most genuinely supernatural dolls in the world.

The Ten Most Haunted Dolls In The World

10) Peggy, The Doll Who Gives You Chest Pain 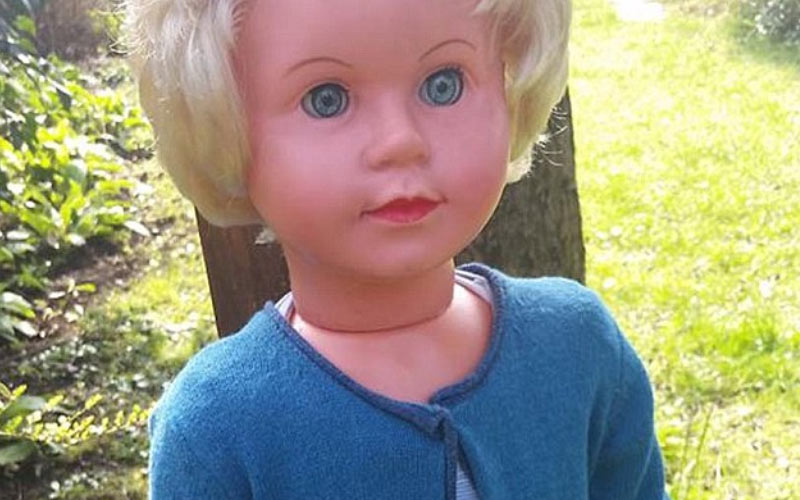 Jayne Harris is a leading paranormal investigator in England who deals almost exclusively with dolls that are haunted. One day Jayne received a package and a letter in the mail. The package contained a blonde haired doll.

In the note, a woman said the doll’s name was Peggy and that she was haunted. Jayne began a case study on the doll, and posted many photos and disturbing videos of Peggy online. Soon she began to receive letters and emails from people who saw the photos and videos and claimed that Peggy caused them to experience nausea and intense migraines.

One unfortunate woman even suffered from a heart attack after looking at a photo of Peggy. Mediums have reported that the spirit of someone who died in the Holocaust dwells within the doll. 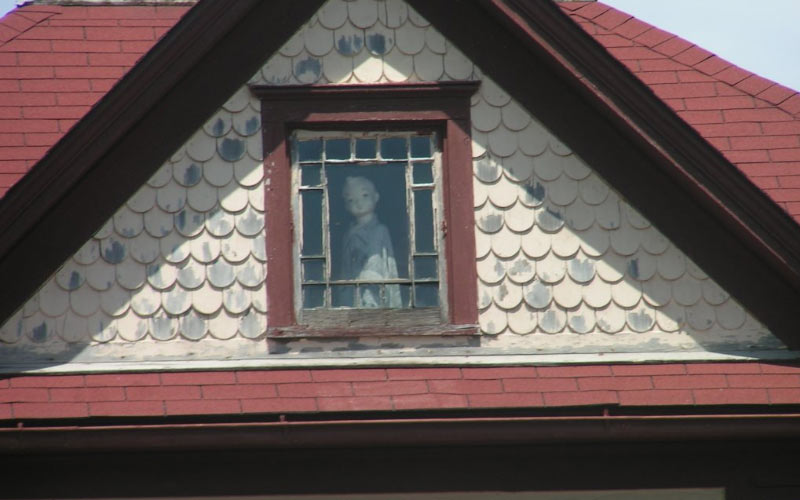 During the 1970s, a man lived by himself in Janesville, Minnesota. There was a small square window in the attic that faced the street. In 1976, the man took a porcelain doll and placed it in the window. Children noticed the doll in the attic window and became weary of it, claiming its expression would change. Overtime, the entire town of Janesville believed the doll to be haunted. Some theorized that the man once had a daughter who he murdered.

Afterward, he deeply regretted his decision and placed the doll in the window as a memorial to her. Folks believed her spirit had transferred itself into the doll. Nobody is quite sure why the doll was placed by the window on that fateful day, which further lends to creepy stories and legends.

The truth behind the doll, and it’s paranormal abilities, may never be known. 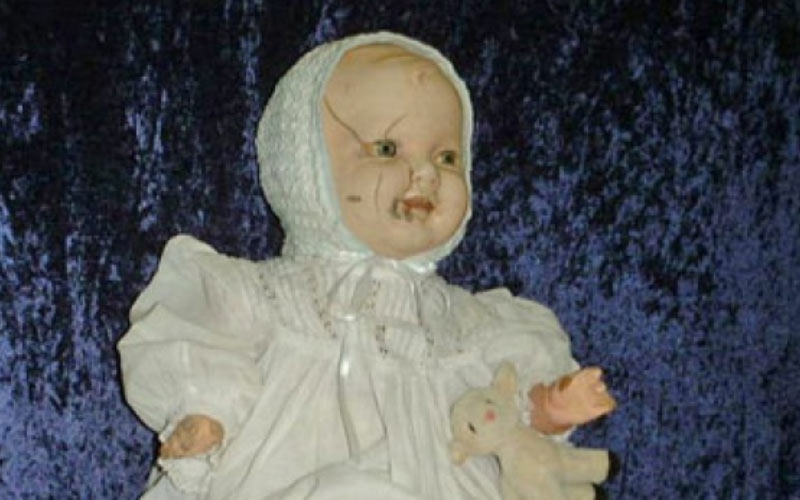 In 1991, the Quesnel and District Museum received an anonymous donation in the form of an antiquated baby doll. The donor informed them that she could no longer endure hearing the doll cry in the middle of the night. Puzzled, the museum curators included the doll in one of their exhibits, against the local psychic’s advice.

Soon, visitors began to claim they heard disembodied footsteps in the room where Mandy was kept. Anytime someone attempted to photograph the doll, their cameras would malfunction. Even creepier is the fact that when Mandy has been placed in the same cases as other dolls, the other dolls become damaged and on the floor of the display case. 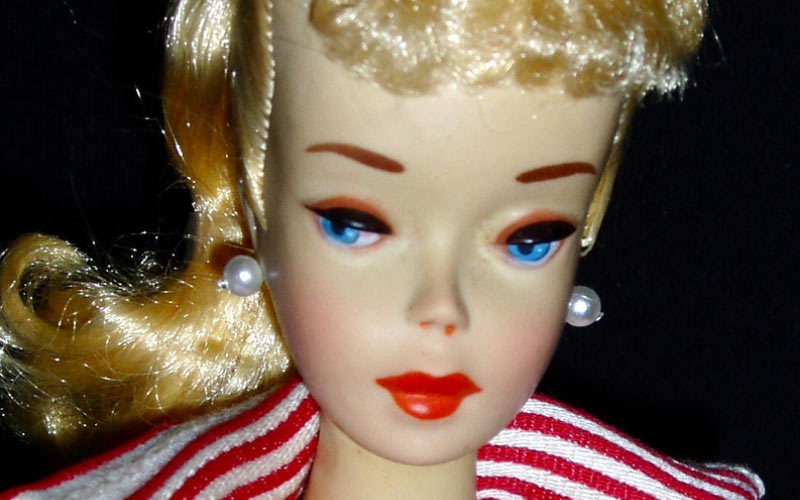 It may be hard to believe, but one of the most haunted dolls in the world is in fact a Barbie. During World War I, British occupied Singapore was once home to a family of German spies. Once discovered, the British chased the family out, and the teenaged daughter fell from a cliff.

The local townspeople built a shrine for the little girl near the Cliffside. Fast forward to 2007, when an Australian man began having dreams of a dead German girl who guided the man to the local toy store. Once there she pointed to a Barbie doll in the display window.

The man had this dream three nights in a row and was convinced it was the German girl from Singapore. He went to a toy store and bought the very doll the girl had pointed to, and took it to the girl’s shrine. Now, hundreds of people believe the soul of the German girl now lives in the Barbie. 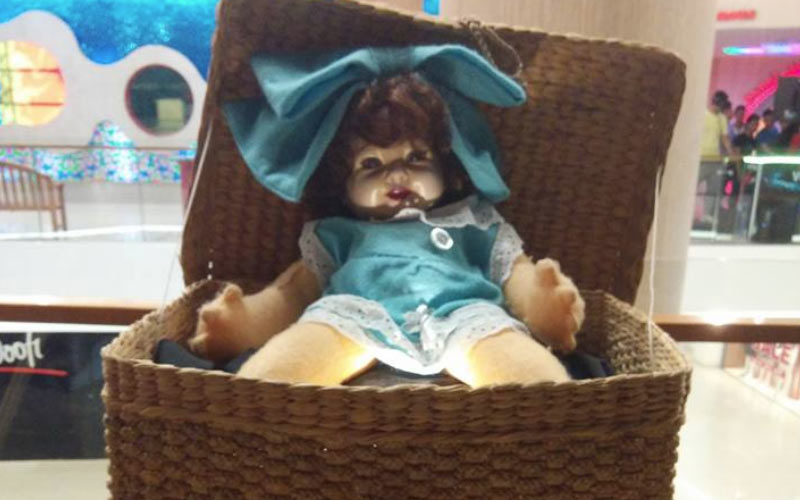 During the 1920s, a little girl in Italy received a doll. The doll was primarily made of felt, but had a head covered in real human hair. The girl became inseparable from the doll immediately. She named her Pupa and prized her above all other possessions. As the girl spent more time with Pupa, she began to insist that the doll was alive and would often speak to her. The girl grew to be a woman and kept the doll until her death in 2005.

Her family kept Pupa and placed her in a glass case as a tribute to the woman. The family has said that Pupa does not like to be confined and can be heard knocking on the glass at night. Occasionally she likes to sneak out and roam around the house as well. 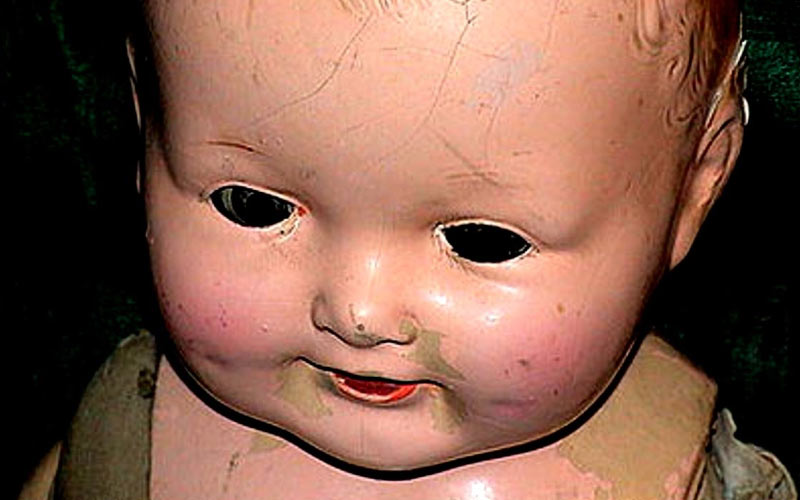 Many years ago, a woman discovered she and her husband were going to have a baby. Delighted by her good fortune, she shared the news with her best friend. That friend had been trying to have a baby for a long time, and was intensely jealous.

The friend acquired a doll with a terrible curse and gave it to the pregnant woman as a gift. Nine months later, the woman gave birth to a healthy baby boy…who mysteriously died three days later. After the death of her son, the woman began to hear her baby’s cries emanating from the doll.

A few years later, the woman had a baby girl, who grew up and acquired the doll. Her son also died three days after being born. For four generations the women in the family all had sons who died on their third day of life, and each could hear the sounds of their crying babies come from the doll.

4) The Dolls of Satan 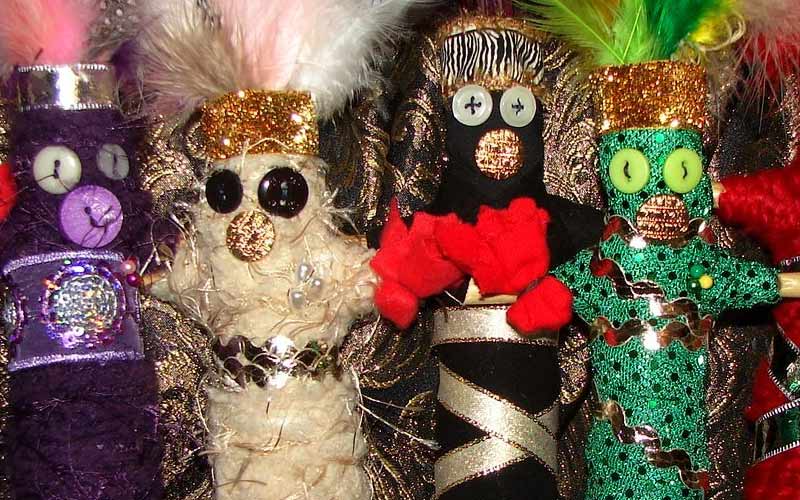 During the 1800s many affluent families lived in New Orleans. One of those families had a daughter who was ready for marriage. The young woman had had a secret affair with a boy in town, but was arranged to wed a wealthy Scotsman. When her lover found out, he sought the help of voodoo queen Marie Laveau. The girl was married and soon became pregnant. But she did not give birth to an ordinary baby.

Instead, she gave birth to a grotesque, deformed monstrosity everybody believed to be the spawn of the devil. The good people of New Orleans began to believe that the baby would wander the city at night and attack anyone in the streets. Some began to believe that by carving a likeness of the baby into a gourd and leaving it on the porch would protect them from Satan’s child.

To this day, the devil gourd dolls are still made. Many believe they are still cursed objects, courtesy of Marie Laveau. 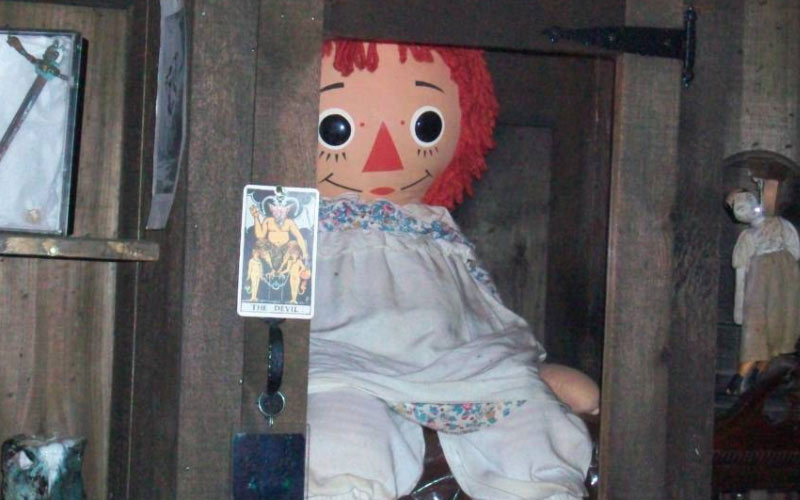 Many horror fans know about Annabelle from The Conjuring, and the movie that was made about her a few years later. But the story of the real Annabelle doll is quite different. In 1970, a young woman named Donna received a Raggedy Ann doll from her mother.

She kept the doll around her apartment. Soon, Donna and her roommate Angie began to notice that the doll would often change position or be in a different room altogether. The girls decided to call a psychic who told them a girl named Annabelle once died in their apartment complex.

Saddened by the story, the girls invited Annabelle’s spirit to fully transfer itself into the doll. The doll then began to emit a blood-like substance from its hands…it even attempted to strangle one of their friends. Today, Annabelle lives at Ed and Lorraine Warren’s Occult Museum.

2) The Doll in the Abandoned House

Kerry Walton grew up in Wagga Wagga, New South Wales. There was an abandoned house on the street that Kerry and his friends all believed to be haunted. After Kerry grew up and moved away, he decided to visit his hometown and the abandoned house.

Hidden underneath the floorboards he discovered a historic marionette doll. Intrigued, Kerry put the doll in his car and began to drive home. During the drive he heard the doll cry out “Ledda me out!” and decided to call it Ledda.

After Kerry brought Ledda home, people would scream and grow extremely uncomfortable in the presence of the doll. They started making appearances on television shows, and one cameraman insisted that the doll turned his head to look at him. Kerry still has Ledda, and has gone on several Australian television shows with what is now considered one of the most evil dolls in existence. 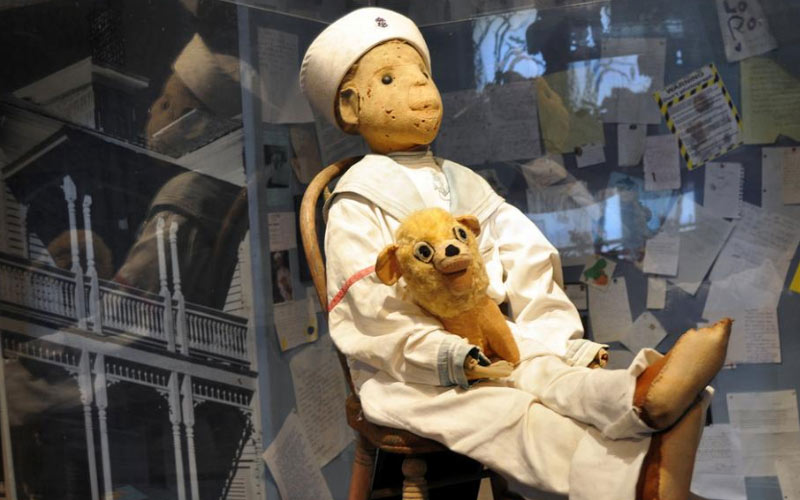 Robert the doll is considered one of the most haunted dolls in the world. In 1904, a boy named Robert Eugene Otto received a doll from the family’s maid. Robert, who went by the name Eugene, decided to call the doll Robert.

Not long after he got the doll, Eugene told his parents the doll destroyed his other toys and would knock furniture over during the night. When Eugene became an adult, he moved out of the house and left Robert behind. The house was converted into a bed and breakfast and the owners said they heard Robert moving around at night, and he would often laugh to himself.

Today, Robert the doll lives at the Fort East Martello Museum. Rumor has it that the staff routinely receive letters of apology written to Robert by those who acted rude around him when they visited the museum.

It makes you think twice about collecting old dolls, doesn't it?

Yes, we need to find more.

oh definitely...and I am posting it to our Paranormal group Exspiravit...