On the Northern Oregon Coast, one mile west of Tillamook Head, a rock rises from the ocean. Local Indian Legends tell of ocean tunnels that are inhabited by spirits allowing them to come to the surface on this imposing rock where sheer cliffs drop straight into the sea to depths of 96 to 240 feet.

Tillamook Rock Lighthouse began in 1879. Originally, it was hoped that a lighthouse could be built at Tillamook Head, a 1,000 foot high headland 20 miles south of the Columbia River. However, this was deemed to be an unacceptable location because no one would be able to see the light....maybe they should have kept looking.

The stories surrounding the Tillamook Rock Lighthouse start with the surveyors and make you think that Native American Legends are true.
The first surveyors accessed the site by jumping from a rocking boat onto the rock. On one attempt, master mason John R. Trewavas, who had a major role in the construction of a similar lighthouse on Wolf Rock off Land's End, England, made the trip to the rock with his assistant Cherry.

In attempting a landing, Trewavas slipped and was swept into the churning sea. Cherry dove in after him, but couldn't find him. The boat was able to rescue Cherry, but Trewavas was never found.

The locals, who were not happy with the project to begin with, continued to voice their options that this was a totally foolhardy endeavor and no local skilled workers could be found willing to work on the construction.

Charles A. Ballantyne, Trewavas replacement, hired men unfamiliar with the area and kept them sequestered in the Cape Disappointment keepers' quarters until construction could begin, in hoping the locals would not be able to talk to them and scare them away.

The trouble continued when the first construction crew was stranded by fierce waves and terrible winds, where no boat could approach. They were attacked by sea lions, and nearly froze to death.

The project continued. On May 31, 1880, 224 days into construction, the rock had been leveled and construction of the lighthouse began. 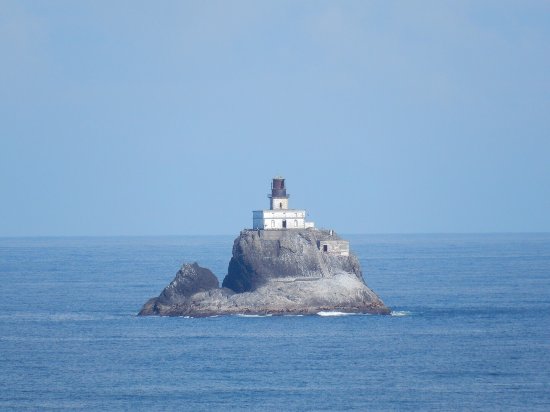 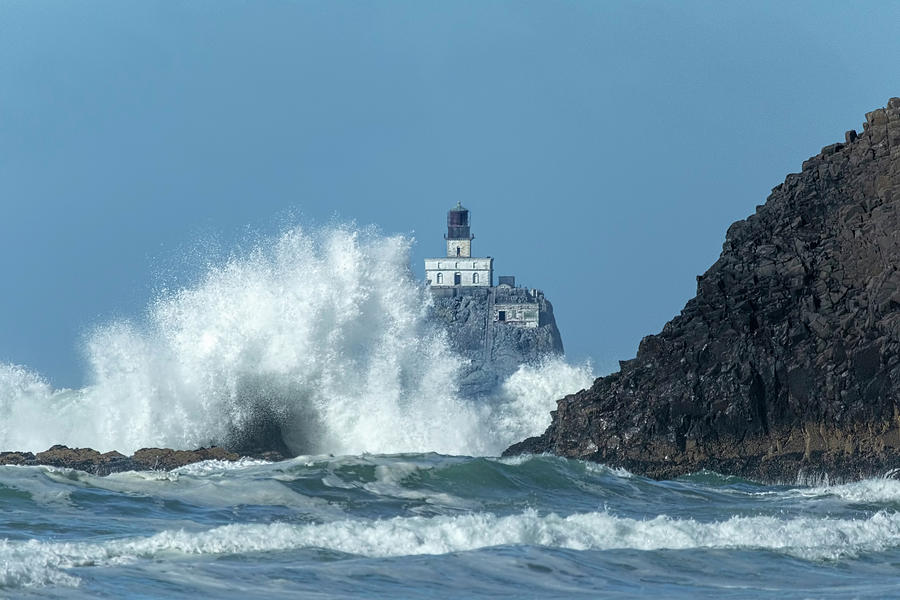 All materials for the lighthouse were brought by boat and hauled up the rock by derricks. The structure originally was a one-story room, 48 x 45 feet with a 32 x 28 extension for the fog signal equipment. Later a half story was added. A 16-foot square tower rising from the center of the building supports the lantern room and parapet, which housed a first-order Fresnel lens. The light shown 133 feet above the sea with a signature of a white flash every five seconds.

The Tillamook Rock Lighthouse was lit for the first time on January 21, 1881. Amazingly, the only construction death was the drowning of Trewavas.

The reputation of the lighthouse spread from coast to coast, not only known as an engineering triumph, but also as a challenging assignment for even the most stalwart keeper. Nicknamed "Terrible Tilly", it continues to live up to its name.

Lighthouse keepers were hoisted onto the rock with a derrick and breeches buoy. James A. Gibbs served one year of duty as a lighthouse keeper beginning in 1945. A maritime author and historian Gibbs wrote the most well known books on the subject, West Coast Lighthouses: A Pictorial History of the Guiding Lights of the Sea. & Tillamook Light.

Storms continually damaged the structure, sometimes throwing large rocks against the tower. In 1934 the Fresnel lens was shattered during a violent storm. The entire lighting apparatus was replaced with a modern rotating beacon. Diesel engines were installed to provide electricity for the light and station. The original light was an incandescent oil vapor lamp.

There were more than storms assailing Tillamook Rock Lighthouse. There were also ghosts...

Numerous lighthouse keepers who heard a ghostly cry as they climbed the circular staircase to the tower.

Two of the ghosts that are said to reside at the Rock, were lighthouse keepers One loved it so much he wanted to be buried there and his friendly spirit is said to have returned to his beloved Oregon Coast Lighthouse to spend eternity. The other Lighthouse keepers ghost is not so friendly. This lighthouse keeper threatened to kill the next one who took his job. When his replacement showed up, he tried to make good on his promise and chased his replacement up the stairs. When they reached the top, the new guy pushed the old keeper down the stairs, and he had to be taken away in a strait jacket and his spirit too is said to have returned...perhaps there is a tunnel from the spirit world under this famous rock.

In his book Tillamook Rock Gibbs tells the tale of the phantom ship that escaped the rocks, witnessed by the four lightkeepers residing on the rock one stormy day.

Leaping out of bed and into my pants, I was outside in a flash and "Swede" was waiting for me, all wrought up as if his blood was boiling in his veins. He pointed to the dim outline of a vessel parting the strands of mist less than a quarter of a mile away - its dull gray silhouette blending with the sky and sea and hinting of mystery.

Through the glasses one could tell that she was an old steamer that boasted a chronicle of long and hectic years - her seams had opened and the oakum had baked out through a series of summers. Badly hogged, her decks had grown sodden from rain and sea water, and the rigging hung limp from her fore and main masts, like a broken spider web, against the dismal sky. The dingy paint was peeling from her sides, and streaks of rust from iron fittings had left tell tale marks. The davits swung empty, the pilot house was partly stove in, and the cabin portholes creaked open and shut with the pulse of the ocean.

It was clear she was headed toward the rocks, and the crew radioed for a Coast Guard cutter to respond. But it was soon obvious that one wouldn't make it there in time to save this old ship. As the seemingly lifeless ship drifted closer to the rocks, she suddenly became motionless even as a rip tide cut through her hull, and as if there was a skilled navigator at the helm, spun around, sparing herself from disaster. The wooden rudder did strike the rocks during this maneuver, and broke free as the derelict ship continued on her way, disappearing into the mist.

An air and sea search was conducted by the Coast Guard, but they could find no trace of the ship or the wreckage. Until a few weeks later, during a bad storm, when the waves crashing against the rock deposited a load of flotsam and jetsam at the base. The lost wooden rudder was there.
The crew desperately wanted it as proof, so Gibbs allowed himself to be lowered down on a lifeline to retrieve it. Just before he reached it, a huge whitewater wave came crashing, inundating him and all in its wake. As the water receded from over him, he watched helplessly as the rudder was swept back out to sea, never to be seen again.

To this day mainlanders claim to see at times a ghostly glow from the lamp room of the deserted lighthouse.

The lighthouse was shut down in 1957 and replaced with a whistle buoy, having become the most expensive U.S. lighthouse to operate.
The structure was listed on the National Register of Historic Places in 1981 and is part of the Oregon Islands National Wildlife Refuge.

And the legend continues...

In 1980, the lighthouse was purchased by a group of investors and converted to a private columbarium. Access to the site is severely limited, with a helicopter landing the only way to access the rock, and it is off-limits even to the owners during the seabird nesting season. After interring about 30 urns, the columbarium's license was revoked in 1999 by the Oregon Mortuary and Cemetery Board and was rejected upon reapplication in 2005. The board said the owners have not kept accurate records and, because urns sit on boards and concrete blocks and not in niches, the lighthouse does not even qualify as a columbarium. 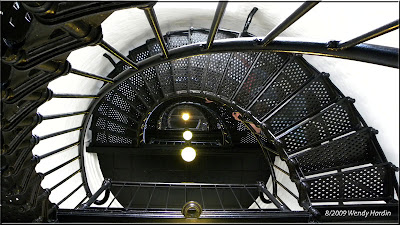 I was able to slowly ascend the steps on a circular staircase for an up-close view inside of the lantern. TILLAMOOK ROCK LIGHTHOUSE ... 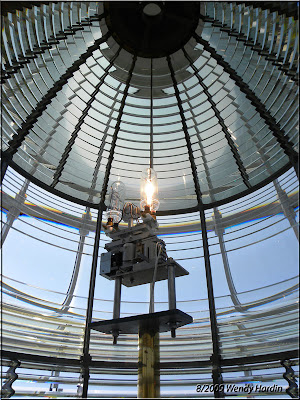 TILLAMOOK ROCK LIGHTHOUSE near the entrance to the Columbia River was replaced by a whistle buoy in 1957. Built on an island 1.2 miles seaward off Tillamook Head in 1881, its 62-foot-high