Witches, spring is upon us. While I’ll always prefer the glorious darkness of autumn, the wheel has turned. It’s time to lean into the airy wonders of the season of becoming. There’s much Hekatean witchcraft to be worked during the spring, from celebrating her seasonal roles and companions to sowing the seeds for our own Hekate’s Garden. Hail the Hekate of Spring! Hail Hekate, Her Companions And Correspondences

Here on the Atlantic coast I’ll be leaning into the fierce storms that usher in the seasonal transition. As the winds blow and the rains fall, I’ll be collecting their energy. This is the pure force of Brimo, Hekate at her fiercest.

May those tempests wash away all that bind us. Hekatean energy transitions towards that of the Great Mother, lighting the fires of burgeoning new life. Dance in the delight of the primal mother, whether Hekate herself or through that wondrous goddess closely connected to her, Kybele (Cybele). Go boldly forth as Persephone did upon her return to the Middle World, guided by Hekate and greeted by Demeter. Connect with Kirke (Circe) for practicing pharmakeia. Join this original witch and our ancestors as we dance on the Witches’ Grand Sabbat. Celebrate them all, yourself and the magick of witchcraft by creating your own kroki, a magickal bracelet connected with the vernal equinox.

Turning Hekate’s Wheel of the Year

There’s a great tale from the Orkney Islands where the goddess of the winter sea battles the goddess of the calmer ones heralded in by the arrival of spring. As I sit here writing this article, I can hear that raging Brimo on my left side where the open ocean is and feel the calm of the cove on my other. When the Atlantic ceases to roar, I know that spring has truly arrived. There is a shift in the energy of the landscape and atmosphere.

Spring around here is most reflected by the element of air, the winds of change that blow away the last vestiges of winter. The landscape slowly returns to green. The smell of salt, mud and decay fill the air. Attune with these signs where you live, performing a ritual to honor the element of air and the return of Hekate as life-giver by creating a spring altar to give her wheel a push in the right direction.

Hekate and the Spring Equinox: The Winds of Change and the Balance ... 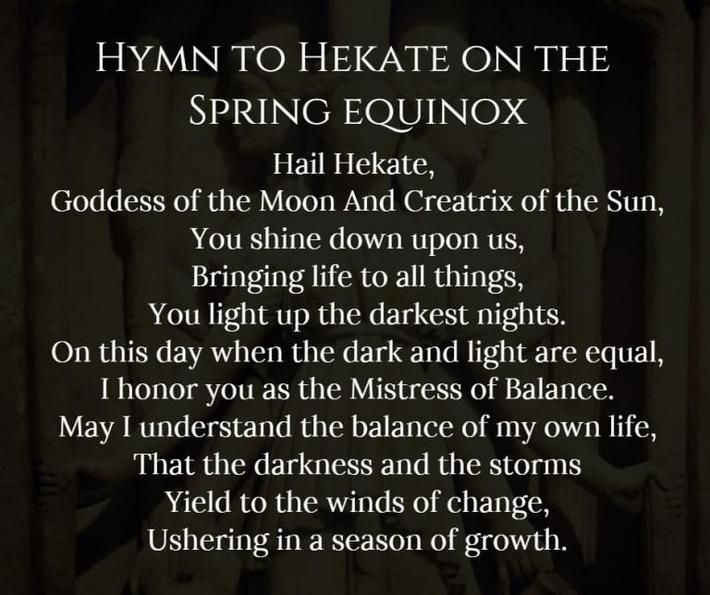 Persephone’s Return to the Middle World

No article about Hekatean Witchcraft for this season is complete without mentioning Persephone’s return. Hekate, as Persephone’s confidant, counseled and directed her seasonal trips to and from the Underworld. Her role as counselor and companion is so very much like the way many of us understand her. The eternal queen of the in-between. As Persephone ascended from her supremacy in Hades domain, she unleashed the energy of spring. Not Hekate’s work, but she made it possible. Demeter, well pleased by her daughter’s return blessed the crops that sustain all life.

Together, the trio represent the cycle of life-death-rebirth, and the force underlying them all. Each one at times playing all the parts of the cycle. Complex goddesses whose mythology reminds us of our multifaceted natures, and that to everything there is a season. For Hekate knows that without death, there is no life. As the psychopompdivine, she heralds souls in the direction they need to go.

Celebrate these amazing goddesses with a ritual honoring their vernal energy of new life, petition them for support as you begin anew.

Demeter: Fertility, Fury and The Fall

The Great Mother And The Season of New Life

While Persephone’s tale is undoubtedly the most widely known one linking Hekate to spring, other sources portray her as the Great Mother. As the creator of life in the material world, the Anima Mundi, she bestows her “fiery flower of creation” upon the world, igniting the energy of this season. Hekate as the Great Mother reminds us that motherhood is complex. There is so much more than the beatific way mother’s are often seen. Darkness, light, truth and consequences. As Mother’s Day approaches, honor Hekate as the Great Mother, your own, and the ways in which you mother the world.

Hekate: The Mother of All

When Your Mom is a Witch

Hekate and Kybele are deeply connected, especially through their probably shared geographical origins. Particularly in ancient Anatolia, the goddesses were worshiped together, and shared similar characteristics. Some scholars posit that Hekate’s title of Great Mother was adapted from Kybele. Both are strongly associated with lions and bulls. By the time of the Roman Cybele, this powerful great mother goddess, along with her lover/son/grandson, Attis, was celebrated with a frenzied festival that occurred around the spring equinox:

“On the twenty-second day of March, a pine-tree was cut in the woods and brought into the sanctuary of Cybele, where it was treated as a great divinity. The duty of carrying the sacred tree was entrusted to a guild of Tree-bearers. The trunk was swathed like a corpse with woollen bands and decked with wreaths of violets, for violets were said to have sprung from the blood of Attis, as roses and anemones from the blood of Adonis; and the effigy of a young man, doubtless Attis himself, was tied to the middle of the stem. On the second day of the festival, the twenty-third of March, the chief ceremony seems to have been a blowing of trumpets. The third day, the twenty-fourth of March, was known as the Day of Blood: the Archigallus or high priest drew blood from his arms and presented it as an offering. Nor was he alone in making this bloody sacrifice. Stirred by the wild barbaric music of clashing cymbals, rumbling drums, droning horns, and screaming flutes, the inferior clergy whirled about in the dance with waggling heads and streaming hair, until, rapt into a frenzy of excitement and insensible to pain, they gashed their bodies with potsherds or slashed them with knives in order to bespatter the altar and the sacred tree with their flowing blood. The ghastly rite probably formed part of the mourning for Attis and may have been intended to strengthen him for the resurrection.” – from The Golden Bough

What more needs to be said? Spring is the season for ecstatic witchcraft, maybe minus the bloodletting.

The ancient Mediterraneans often wore threads or cords around the wrist and ankle as a sign of devotion, especially during festivals. The ancient wearing of kroki to honor Demeter during the spring is still practiced in Greece (and elsewhere) today with the wearing of the martis bracelet.

In ancient Greece, children often wore threads around their wrists, ankles and waists as protection charms. Given that Hekate was a Kourotrophis, Guardian of Children, it is plausible that these kroki were connected to her. You can purchase a bracelet to wear as your kroki, but I suggest making one by braiding cords in colors that represent your intentions for spring and to honor your spring goddesses. I also make different kroki for spells and rituals. 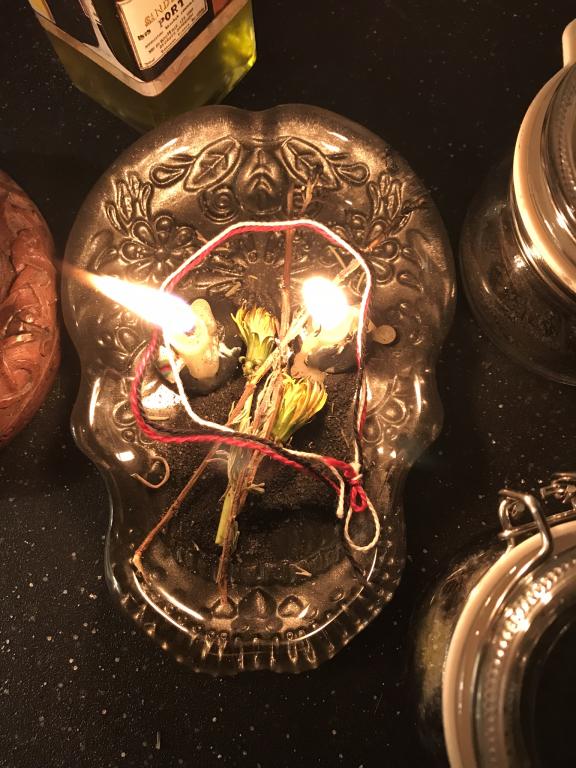 Kirke has a special place in my heart. Sometimes portrayed as Hekate’s offspring, but always her daughter in witchcraft. If you haven’t yet read Madeline Miller’s excellent novel, perhaps this is your spring project. The spirit of Kirke returns to her beloved pharmakeia as the men in her life left her, time and time again. The plant spirits remained, and in them she found her power. Wander the woods, exploring the new growth, evoking Kirke’s presence as you go. While you’re outside, be sure to harvest some spring botanicals, from pinching a few willow leaves to collecting dandelions. I know my own spring celebration will focus on honoring the most Hekatean Witchcraft tree of all, the willow.

Sow the seeds for your own Hekate’s Garden, including some of her ancient plants, especially the poisonous pretties of her witches.

Kirke (Circe) Is A Goddess We Need Right Now: Her Story, Themes, Co... Get ready to ride your broom to the Witches’ Realm to visit with your witch ancestors, and connect with your witch-friends. Arguably my favorite sabbat, May Eve is a wonderful night to celebrate witchcraft and really unleash your inner witch. Dance around that witch-fire. Release the power of creation, giving life to magick and mystery. Hekate as the Witch-Mother is rightfully honored on this day.

Spring Initiation Into Magick and Mystery

Whether you celebrate the return of Persephone, Hekate and or Kybele as The Great Mother, wander the woods with Kirke, make your own kroki or fly high on the Witches’ Grand Sabbat, spring holds the promise of deeper initiation into all the wonders of witchcraft.

May your vernal celebrations bring you a deeper understanding of witchcraft and the amazing goddesses we honor.

Join The Witches’ Realm for spring celebrations, including our anniversary on The Witches’ Grand Sabbat. My book, Keeping Her Keys: An Introduction to Hekate’s Modern Witchcraft, will be released just in time. To learn more about Hekate’s Wheel of the Year, purchase my ebook here.

Note: I use the Greek spelling when referring to the myths and lore of the goddesses from this perspective and the Latin when the goddesses are written about using tales from the Romans.