Can This Little Cup of Coffee Forecast Your Future?

Coffee is powerful stuff, sure, but is it that powerful? Caffeine makes life work, but what if a cup of coffee could do much more than kick-start the day (or night)? What if it could predict the future?

Tasseography, the art of using coffee grounds to tell fortunes, dates back for centuries in Europe and the Middle East; and it's having a moment again if a couple of recent Bravo show episodes are any indication. Scenes have turned up recently on The Shahs of Sunset and The Real Housewives of New York City, and now we're curious. How does it work? Does it work? And how can we give it a shot, so to speak? 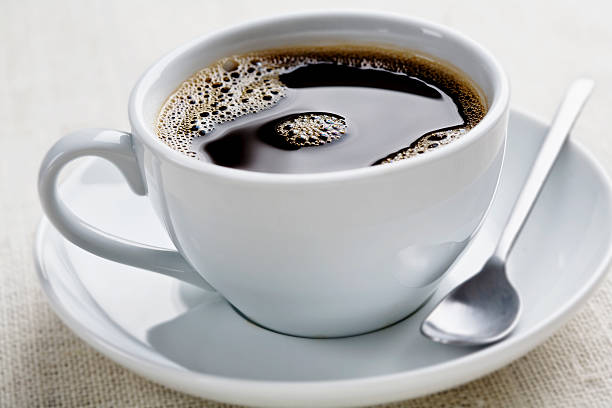 RHONY's coffee messenger, as she likes to be called, is Queens-based Sema Bal, who accepts appointments for in-person readings. Or if you want some one-on-one time with the cast's latest psychic, author Kim Russo (aka the Happy Medium), you'll have to get on her one-year waiting list. On the show, Sema stunned Carole Radziwill by bringing her a message from her late husband, while Kim did the same for Dorinda Medley. The readings have also shown up on a few episodes of Shahs of Sunset, most recently when Asa Soltan Rahmati's mother read Reza Farhan's future at his birthday party—but only after Asa said it was okay to tell Reza what she really saw in those coffee grounds.

The basic process involves sipping a cup of thick Turkish-style coffee (brew it even thicker and stronger than if you were just drinking it for pleasure), then flipping the remains onto a saucer. The reader can then interpret the patterns in the grounds left on both the cup and saucer. The imagery in the grounds is like a Rorschach test, and both the pattern and its placement have meaning in a Turkish coffee reading. Where the image appears can help determine whether an outcome is in the near or distant future, or what the general subject matter relates to—whether it's, say, about making more money or getting married. Here are some tips on how to do your own amateur reading if you can't book time with the experts:

1.  Have someone else read your cup for you

Yes, you're playing around casually with an age-old art, but you should still stick to a basic rule: Reading your own cup is a no-no; another person should do it for you.

2.  Look at the coffee before you pour it out

Medium Serena Powers suggests that there's meaning to be gleaned from the coffee's appearance in the cup; she says that bubbles, for example, mean that "money is on the way."

3.  Have a question or wish in mind at the beginning

Sema Bal asks that you think of a wish as you're sipping the coffee. When flipping the coffee cup onto the saucer, you'll hold the two together and turn the cup either clockwise or counterclockwise as you ask the question or make the wish. If you don't know what to ask, let your mind drift and somehow lead you to the right subject. 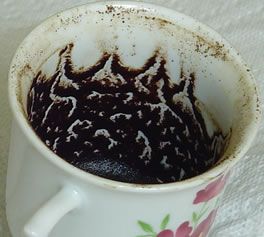 4.  Know what the symbols mean

According to Turkish coffee blogger Mario Baker, there are more than 200 symbols to be interpreted in these readings, including mosquitoes (to warn of enemies), doors (representing opportunity) and mermaids (success in business and love).

5.  The placement of symbols is also important

Take note of where these symbols appear on the saucer and the cup. For instance, if you see a symbol on the upper right corner, it might be dealing with the near future; if it appears on the lower left-hand side near the handle, it might point to the distant future.

So there you have it: Brew up some thick, rich Turkish coffee, grab a willing partner, and give it a go. At worst, it's an excuse to drink more coffee. We can live with that. 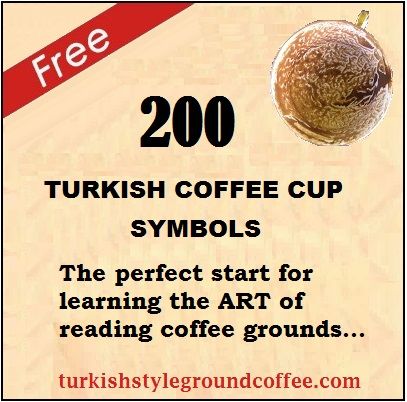