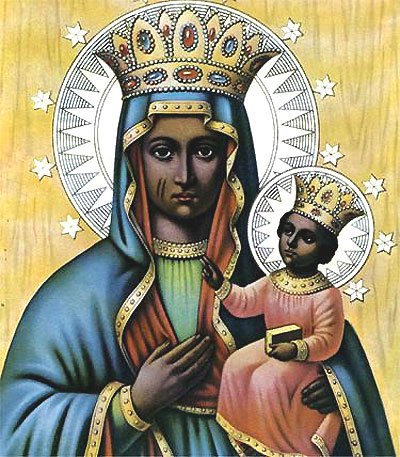 Ezili Dantor (pronounced eh-zee-lee Dahn-tor) is by far one of the most popular female Petro Lwa. She can be a tough lady, a little wild, but before all she is a mother. She is the most perfect mother one could wish to have.Dantor is a mother who watches and cares for her children very much. She can be a disciplinarian, as she does not and will not tolerate children behaving badly. She will defend her children and family until the very end. Dantor will also help a person for very little sacrifice on their part.

Dantor is served with the Image of Mater Salvatoris, sometimes also known as Santa Barbara Africana, which is the image you see on the top left hand corner of this page. She is also associated with other Madonnas who hold a child such as Our Lady of Mount Carmeland Our Lady of Czestochowa. Other images include Our Lady of Lourdes and Our Lady of Perpetual Help.

Danto is also considered a protector of children. As naturally as a mother would protect her own, Mama Danto will always go to extremes to ensure the safety of her children. She will stop everything she is in the process of doing in order to go to her child’s aid. She will always be featured with her child in any image. The daughter most frequently seen in her arms is known as “Anais“. Ti Jean Petwo is also Danto’s son, yet he is also her favorite lover.

Anais often serves as Ezili Danto’s translator and interpreter. She relays messages sent to Danto, thus she is often addressed when speaking to Danto. Danto is alsothe mother of a few sets of the Marassa herself. Some will say that Mama Danto has seven children.

Dantor can be wild, aggressive, and difficult to control. She is considered a “hot” spirit. For these reasons, one will at times hear her referred to as a djab. She is a country woman, independent and strong.

A popular song is:

Dantor is that strong, she is able to sustain seven stabs and still hold a basin and vomit blood. Although she vomits blood, she continues on. To an uneducated view, this looks like a song describing defeat. In actuality, it demonstrates the strength and power of this spirit. Sometimes Dantor will actually vomit blood while in the head of a possessed person. 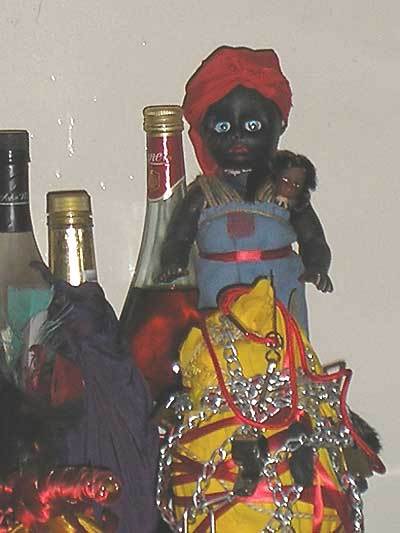 In other words, even the day I am defeated I will still punish them. Dantor handing a basin of blood to someone is not positive. It usually shows Dantor’s distaste with the individual. She is mad and will punishhim/her. One does not want to be punished by Dantor! Dantor is also associated with heavy rains that destroy things in its path.Dantor is sometimes referred to as Ezili Zye Wouj or Ezili Red Eyes. The fact is that this is a separate spirit, yet she walks so closely with Dantor that some consider it to be Dantor extremely mad. Ezili Zye Wouj does talk yet can be difficult to understand. The eyes of someone possessed by this spirit will usually become extremely red in a matter of seconds. This is considered a very dangerous spirit.

Sometimes people confuse the many Ezilis together. Dantor is a spirit that is separate from the others. Dantor has many sister spirits that walk with her, like most Lwa. Some of these are known as Ezili Ke Nwe or Ezili of the Black Heart, who spits black liquid when riding someone’s head. Ezili Mapyang, Balyan, and Mambo Zila are a few others.

There is a long time rivalry between Ezili Dantor and Ezili Freda. They are sisters and just cannot stand each other. Like many sisters in real life, there is powerful jealousy between them. As the story goes, Dantor and Freda were both courting a particular Ogou Lwa. Over this man they fought and never reconciled. During this battle, Dantor took her dagger, which she always carries with her, and stabbed Freda in the heart. One can see evidence of this in Freda’s saint image. A gold dagger is seen coming out from her heart. Freda, in turn, removed the dagger and cut Dantor’s face, scarring her. Thus you will see scars on the Santa Barbara Africana image. Although there are only two marks, these marks are often called “twa mak” or three marks. Facial scarring of exactly that variety can point to Dantor’s African roots, where such facial scarring is common.

Mambo Ezili Danto is known to have played a huge role in the history of Haiti, mother of the country

Mambo Ezili Danto is mute and deaf (thus Anais serving as her interpreter). The reason she is mute goes back a ways to the time of the Haitian revolution.

Before the revolution, Mambo Marinette became possessed by Ezili Danto in a ceremony. A black pig was sacrificed to Ezili Danto. The location of the ceremony is famous, known as Bwa Kaiman or Alligator woods. A pact was written with the pig’s blood, thus commencing the slave’s revolt.

Mambo Marinette was the priestess that underwent that possession. She is now served as a Lwa, one who is very connected to Danto. Thirteen years after the ceremony, the slaves declared victory and formed the Republic of Haiti.

Sometime during these battles, Ezili Danto decided to join her people in war. Her people feared that she would give away their secrets should she be captured, so – her own people – cut out her tongue rendering her mute. Now Ezili Danto only utters a “ke-ke-ke” or a “de-de-de”. The sound of her tongue clicking on the roof of her mouth.

Serving Mama DantorMambo Dantor, or Mama Danto as I refer to her, is a wonderful Petro Lwa whom – as I mentioned before – usually requires little in return for blessings. She can be seen featured on peristyle wallsall over Haiti, on Vodouisants’ personal altars, and may even have a room built just for her. She works hard and fast for her children, and looks for the best solution to help them. Ezili Dantor is served, like the rest of the Petros, on Tuesday. On this day, many of my children will perfumeher area and light candles for her. This is the best day to wear her colors and sing for her if you plan to serve her.

Danto is served with Navy blue and blood red. Some will also serve her with more colors, sometimes seven or even twenty one colors. You can see the reason why she is served with these colors if you pay attention to the image of Mater Salvatoris (sometimes referred to as Santa Barbara Africana). She wears a robe of red and blue with a golden border.

Danto enjoys Reve D’oir perfume, which unfortunately isn’t most readily available in the United States. If one cannot get a bottle of Reve D’oir, I usually suggest a bottle of a nice musky scent, or a unisex cologne. She also loves Florida water, which she often drinks.

She also drinks red wine which is steeped with certain herbs. She is the patron of Kanzo pakets and the Queen of Sanpwel, thus she is also sometimes offered kleren, which may or may not be steeped in her sacred herbs. Certain beers may also be offered to her. Creme de Cacao can also be offered to Dantor, but only at certain times and in certain instances.

She enjoys daggers, preferably with a double edge. Silver jewelry and necklaces, silver rings with a red or blue stone. Dolls are an ever popular gift to her, and an altar to Dantor may feature many, many dolls. Outfits made of blue denim, known as Karabel in Haiti, are worn by Danto especially when she goes out selling in the market.

As far as sacrifices, Dantor enjoys a black female Kreyol pig. She eats roasted pork, griyon in Kreyol, along with the other main staples for the Lwa. Rice with kongo peas, sweet potatoes, and yams are a few of her favorite additions to her meals. Dantor also receives black hens, but these are more often used in magic on her point or as a small payment for work or a contract.

She is known to be a wise businesswoman. She sells pigs in the market and is very successful in providing everything she and her children need. She can help you obtain new opportunities in business, success, and luck. Although she isn’t rich, Dantor will bestow her sevite with opportunities to succeed.

She smokes strong cigarettes, strong dark filterless cigarettes, and sometimes cigars. She can eat in the enamel kivets (bowls) as is usual with the Petro mysteries but she can also be served with a Kwi(calabash bowl).

She is feasted on the following days: