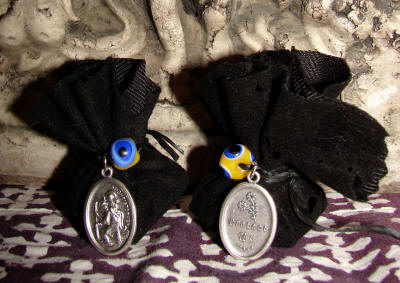 In Vodoun, or Voodoo, gris-gris resemble charms or talismans which are kept for good luck or to ward off evil. Originally gris-gris were probably dolls or images of the gods, but presently most gris-gris are small cloth bags containing herbs, oils, stones, small bones, hair and nails, pieces of cloth soaked with perspiration and/or other personal items gathered under the directions of a god for the protection of the owner.

The origin of the word is unclear, but some scholars trace it to juju the West African name for fetish, or sacred object. Juju maybe be an European translation for the expression grou-grou (hence gis-gris), or it may refer to the French word joujou, which meant "doll" or "plaything." Most of the African fetishes were shaped like dolls, and early Europeans on the African West Coast may have mistaken serious religious objects for innocent looking poppets.

Walter Gibson, in Witchcraft (1973), states that fetish denotes any object possessed by a holy spirit, while juju more specifically meant a charm, something witch doctors needed to make their medicine work either for good or ill. Biren Bonnerjea whose Dictionary of Superstitions and Mythology appeared in 1927 defines juju as the West African name for a fetish, also called grigri.

The gris-gris became traditional in New Orleans, the American headquarters for voodoo, where they were use for various things such as attracting money and love, stopping gossip, protecting the home, maintaining good health and achieving innumerable other ends. At one time, every police officer was known to carry a gris-gris for protection. A gris-gris is ritually made at an altar containing the four elements of earth (salt), air (incense), water and fire (a candle flame). The number of ingredients (placed in the gris-gris) is always one, three,. five, seven, nine or thirteen. Ingredients are never an even number or more than thirteen. Stones and colored objects are chosen for their occult and astrological meanings corresponding to the purpose for which the gris-gris is to be used.

A red-flannel bag holding a lodestone or magnet was a gambler's favorite gris-gris, which was suppose to absolutely guarantee good luck. Another favorite gris-gris of gamblers was made of chamois, a piece of red flannel, a shark's tooth, pine-tree sap, and dove's blood. The dove's blood and sap were mixed together, and this mixture was used to write the amount that the gambler wished to win on the chamois, which was wrapped in the red flannel with the shark's tooth between the two layers, all of which was sewn together with cat's hair. This charm was supposedly worn in the left shoe to bring good and often uncomfortable luck.

What was referred to as "putting a gris-gris" on a person could be used to bring others bad luck or misfortune. Such gris-gris filled with gunpowder or red pepper were thrown on a person or at his door supposedly to get him into a fight. They also were to get rid of people. Marie Laveau to have written a person's name on a small balloon, then tied it to a statue of Saint Expedite, when released the person would supposedly depart in the same direction as the released balloon took. Leaving a gris-gris, usually containing powder, for a person generally that he or she was not in the "voodoos" favor and they had better watch their step.

One of Marie Laveau's more horrible 'wangas', or bad luck reputedly was a bag made from a shroud of a person that had been dead for nine days. It contained the following ingredients a dried one-eyed toad, the little finger of a black person who had committed suicide, a dried lizard, a bat's wings, a cat's eyes, an owl's liver, and a rooster's heart. If such a gris-gris were hidden in the victim's handbag or under his pillow, surely the unfortunate would die. Many white masters mistreated their slaves and often found gris-gris filled with black pepper containing saffron, salt, gunpowder, and pulverized dog manure.

In Santeria, gris-gris bags are called resquardos or "protectors." A typical resquardos under the protection of the thunder god Chango usually contains herbs, spices, brown sugar, aloes, stones or other sacred relics, tied up in red velvet and stitched with red thread. Finally the Santerio attaches a gold sword, the symbol of Saint Barbara (Chango's image of a Catholic saint), and if the sword breaks Chango has interceded on behalf of the owner.

Gurunfindas are talismans made by the Santeria's black witches, mayomberos, to ward off evil from themselves and direct it toward others. To make a gurunfindas the mayombero first hallows out a guiro, a hard, inedible plant found in the tropics, and fills it with the heads and hearts of a turtle and various specious species of parrots, the tonguer and eyes of a rooster, and seven live ants. Next the mayombero adds seven teeth, the jawbone and some hair of a cadaver, along with the cadaver's name written on a piece of paper, and seven coins to pay the dead spirit for his services. Then the mayombero pours rum over the mixture and buries it beneath the sacred ceiba tree for 21 daus. When he disinters the guiro the mayombero marks the outside of the fruit with chalk, and then hangs the charm near his home. A.G.H.