Why I’m a Satanist in Our Abrahamic Cultural Mythology 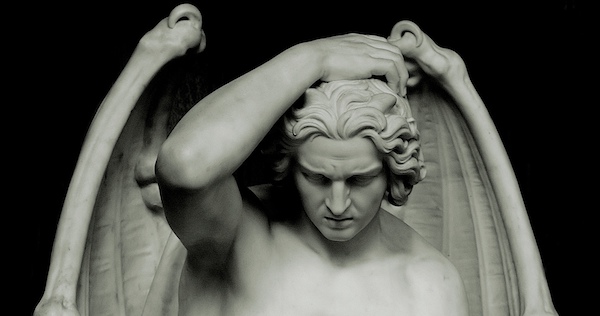 I want to talk today about story as a programing language. When you get right down to it, all stories are a way to access the part of our brains that makes comparisons and looks for similarities that are applicable to our own lives. We all keep a running narrative structure of our life in our head, which is why memory is tricky because sometimes it revises itself to maintain consistency. That’s how we end up with things like False Memory Syndrome. Your brain will do some very clever editing to maintain your role as the protagonist in your own life, because if it doesn’t you end up getting very depressed. Imagine reading a book about your life and finding out that you’re the comedy relief, or worse, the villain.

So stories, particularly ones that resonate with us, get reimagined and reinterpreted within our minds to frame the story in such a way that the characters we associate with become the protagonist. This is how you get things like Harry Potter fan-fiction in which Neville was the true prophesied hero; or instances in which the protagonist remains but the conditions of the fictional world are changed to create more resonant circumstances, like in Pride, Prejudice and Zombies; or consider reimaginings from a different character’s perspective that changes the story completely like how Hamlet was turned into a comedy by Rosencrantz and Guildenstern Are Dead.

What stories do is give us a common language to discuss events in our own lives. Surely you’ve had a conversation with a friend in which one of you was explaining a situation and said something to the effect of ‘it’s like that scene in [movie]’. We all do that. I have friends who are obsessed with the unwritten homosexual undertones between Captain America and Bucky Barnes, and those definitely exist. Friends will use personal examples from their own lives to give you perspective on a personal situation. Parents love telling each other stories about their kids, because it fosters a sense of shared experience.

Stories, and how they’re told, matter. Facts matter too, but we think in stories. Stories effect how we think, and that effects how we act.

Many aspiring authors consider this a bug of storytelling, because the meaning they hope to impart almost never comes across as intended. But it really is a feature. It’s why people like stories. No one loves a story they can’t see themselves in or a character they can’t empathize with. The public is going to take the meaning it wants regardless of what you intended. For example, in Pirates of the Caribbean Jack Sparrow would traditionally be secondary character and Forgettable Whatshisface played by Orlando Bloom is supposed to be the traditional hero. No one cares about him though; they’re watching that movie for Jonny Depp and everyone knows it.

The power of belief in a story, any story really, isn’t in the factual truth of it. Stories are, after all, just very complicated lies. But they’re lies that are told with the intention of conveying a moral message. The Iliad is a lie about perseverance through adversity. The old norse legends are lies about honor and dignity in battle. The Abrahamic faiths are all lies about the nobility of subservience to a will greater than your own. Most religions, at least in the West, are the same story with key differences that change the focus and interpretation. The disagreement between Christianity and Judaism is whether or not Jesus was the messiah of the story; the disagreement between Islam and Christianity is whether Jesus or Muhammad was the messiah; Judaism and Islam diverge on whether it was Issac or Ishmael that god ordered Abraham to kill; Atheism isn’t a religion but it’s about how all those stories are made up; and Satanism is predicated on the idea that god isn’t actually the good guy in any of those stories (and also that it’s all made up). 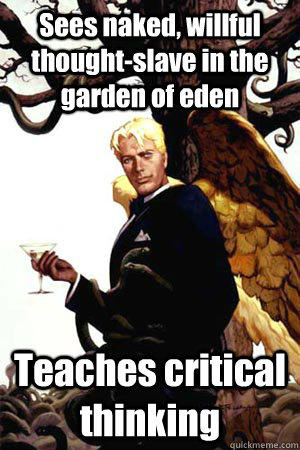 What does this have to do with programming languages again?

If your brain is a biological computer, which a large body of evidence seems to suggest, then thinking is really just processing and executing scripts. At it’s most basic that looks something like this:

Things get a lot more complicated from there though, especially when dealing with interpersonal relations. When we meet new people we try to discern their programing based on combinations of characters that we already know. Then we can decide how to react to them. Stories expand that base of defined characters so you have more variables to work with. How you react to your boss asking you to do something is going to be very heavily influenced by whether you think they’re {(Scrooge McDuck x Jimmy James)/Larry the Cable Guy} or {Steve Jobs+Wonder Woman2}. (Note: yes, that is a politics joke.)

It’s also a big help if, when communicating, everyone involved is using the same library of stories. It doesn’t work so well to describe a person or situation as Dickensian to someone who has never heard of Charles Dickens. Even having shared stories only gets you so far though, because disagreements happen. Someone who is a fan of Ayn Rand, for example, will perceive a character like Ebenezer Scrooge as a tragic John Galt whose agency is brainwashed away by manipulative societal pressures.

Religions are like an app that uses a specific story library, not because of their historical accuracy, but because of their ubiquity. Everything gets defined in terms of that story to the believer. To a Christian Superman=Jesus+alien and an Atheist is just a person who has been infected by the PrinceOfLies virus. So if you’re going to build an app (religion), you’d do well to use the programming language that is most ubiquitous. In the West, that means Abrahamism is your coding library. Many of us wish that wasn’t the case, but it is the case. To put that in computer terms: you may personally think C64 Basic was superior to DOS, and it may well have been … too bad, that’s not how the industry went.

If I lived in Ancient Greece, I’d probably be an Erisian. I don’t; so I’m not. In this United States, in this moment, the prevalent mythology is the Abrahamic one. So for me, the best way to explain my position is to simply say that, having read the story, that I don’t think god was the good guy. I don’t think any of what took place in the story actually happened either, but whether or not it’s true doesn’t matter when it comes to interpretation.

In that story, subservience to god is predicated on the idea that god created everything and therefore what god created is subject to god’s will. Why? What if this hypothetical god is wrong? People like to say god can’t be wrong but the only evidence for that is god’s own say so. Nothing corroborates it. God says god is infallible, there’s no proof of that. Isn’t the entire point of existence to make something greater than yourself that surpasses your expectations? Shouldn’t a creator be proud to to make something that doesn’t do what they expect it to do, but does something greater despite their protests?

Isn’t the parent that has been proved wrong by their kid supposed to be very proud?

I’ve never heard a good answer for any of that. Last week when Jex Blackmore was on a panel with the Westboro Baptists they brought up the clay pot analogy. Which basically says ‘god made you, and therefore he can do what he wants with you, forever’. I think that’s wrong for the same reasons I think it’s wrong for a parent to tell their kid what music they’re allowed to like, or who they’re allowed to love, or what they’re allowed to do with Their Life. At some point you need to give up control. That’s what god, in the Abrahamic sense, apparently refuses to do. Every good parent does it. So, that god is a jerk and there’s no reason to consider their opinion except for the perceived threat of punishment. That isn’t love. People like to say ‘God is Love’ but I don’t believe that based on the stories I’ve heard. Love is accepting people for who they are, faults and all. Love is not doing harm. God doesn’t accept your faults and demands obedience through suffering even though they’re allegedly responsible for those faults. It just doesn’t make sense.

In those stories of the Abrahamic god there is one dude, Satan, who says ‘this system sucks’. That isn’t a shot across the bow at just Christianity either. It permeates the three Abrahamic faiths. There is a story in the Muslim Hadith (based on the Old Testament) in which Abraham is told to sacrifice his kid. It talks a lot about how first Satan went to Abraham’s wife to try and convince her to stop Abraham, and when that didn’t work Satan went to the kid and tried to convince him to not go with his dad, and when that didn’t work Satan went to Abraham himself and tried to convince him not to do it. God, in that story, wanted Abraham to agree to sacrifice his kid just to test how obedient this thing he made would be. That’s not fact, that’s story. By my interpretation, Satan in that story was the only one running around saying ‘it’s wrong to kill someone just because someone else said to’. So is Satan really the bad guy of that tale? Theists will point to that story and praise the piety and devotion of Abraham … I think he was being an idiot and not listening to good advice.

That’s why I’m a Satanist.