A. Sutherland - AncientPages.com - Freemasons have several symbols that play a vital role in their rituals.

These symbols can be traced to the beginning of Freemasonry and reflects the Brotherhood’s beliefs and traditions. In this top list we examine the history and meaning behind some of the most important Masonic symbols. 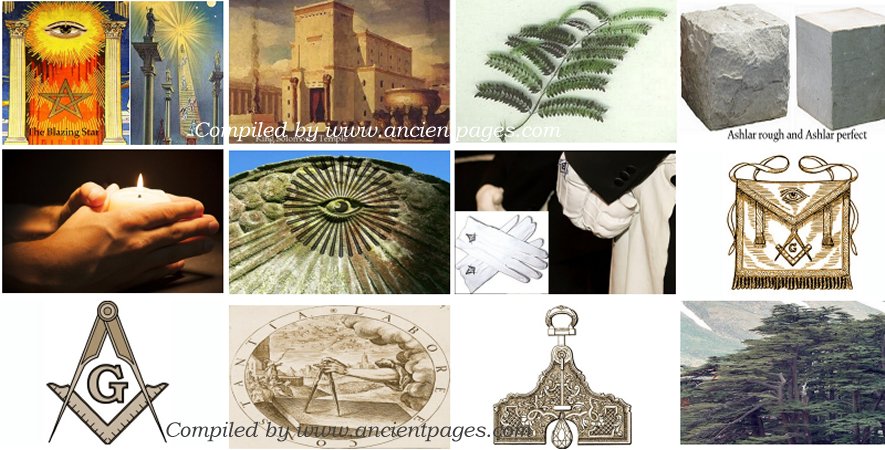 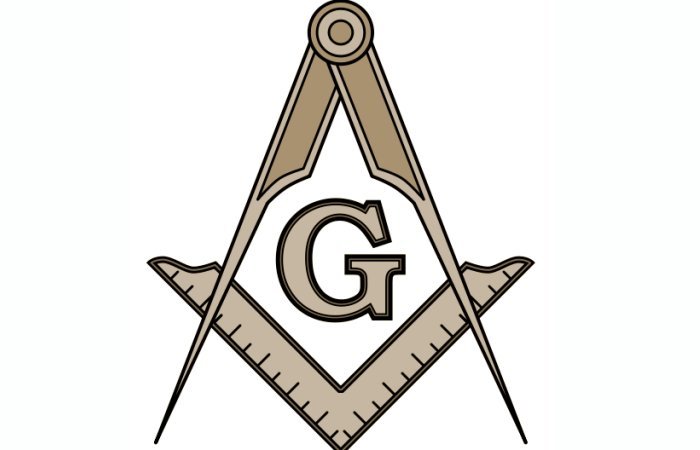 It is a widely known symbol of Freemasonry. Both the square and compasses are architect's tools and are used in Masonic ritual as emblems to teach symbolic lessons. It is often seen with the letter "G" in the middle, which stands for “geometry”, a powerful science that helps unravel the mysteries and wonders of nature.

Ancient tradition says the letter "G” placed at the center of the symbol, represents God and Geometry. Belief in God is the primary requirement in order to become a Freemason; no atheist can be a member of this oldest, largest and most widely recognized fraternal organization in the world.

The compass (to draw circles), represents the realm of the spiritual eternity. It is symbolic of the defining and limiting principle, and also of infinite boundaries.

The angle measures the square, the symbol of earth and the realm of the material. The square teach us to square our actions with all mankind, is also the emblem of the Master of the Lodge because it is the proper Masonic emblem of his office. The square also represents fairness, balance, stability, giving a foundation for building upon. 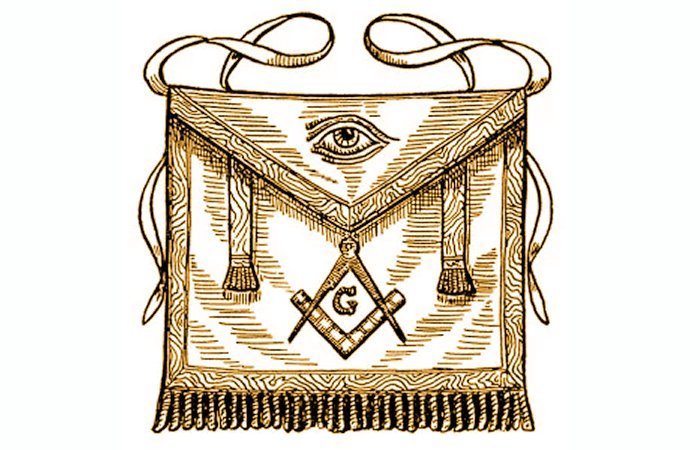 It is the most iconic symbolic emblem of Freemasonry. It is the unique badge of a Mason and it is considered a tool. It’s said to be more honorable than the Roman Eagle or the Golden Fleece, the Masonic apron is literally, the badge of a Mason carried with him into the next existence. Celebrated in poetry and prose, the Lambskin Apron is the initial gift of Freemasonry to a candidate, and at the end of life’s pilgrimage it is placed on his mortal remains and buried with his body in the grave.

This badge symbolizes regeneration, or a new life. It refers to the "pure heart."

It goes back to the days of working Masonry, when masons wore a long apron of thick leather to protect them against splinter; of rock and blows from their tools. As a piece of protective clothing, the apron symbolizes hard work and at the same time it helps create and maintain the strong bond of belonging to the same fraternity.

It is said that the apron refers to the "pure heart," the gloves - to the "clean hands" and both are associated with purification, which – in Freemasonry - was always symbolized by the ablution, which preceded the ancient initiations into the sacred Mysteries. 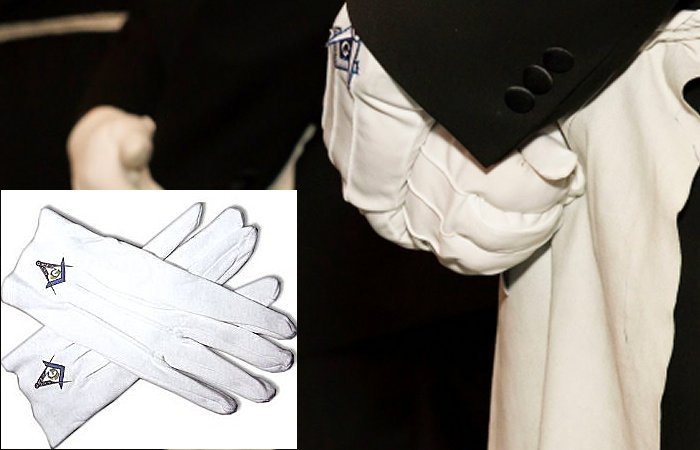 Masonic gloves symbolize the 'Works of the Hands'. The gloves given to the candidate for himself are intended to teach him that the acts of a mason should be as pure and spotless as the gloves now given to him. In Europe, they are given to candidates at the same time when they are given the apron; the same custom formerly prevailed in England; now (in Europe and America) the  gloves are not involved in ceremony, but they are worn a part of masonic clothing. Tradition of the gloves is very old. In the middle ages, gloves were worn by operative masons to protect their hands from the effects of their work. Édouard Didron (1836-1902), a French stained glass artist and art writer, wrote:

In the Masonry, their use was intended to - like the apron - denote the necessity of purity of life. 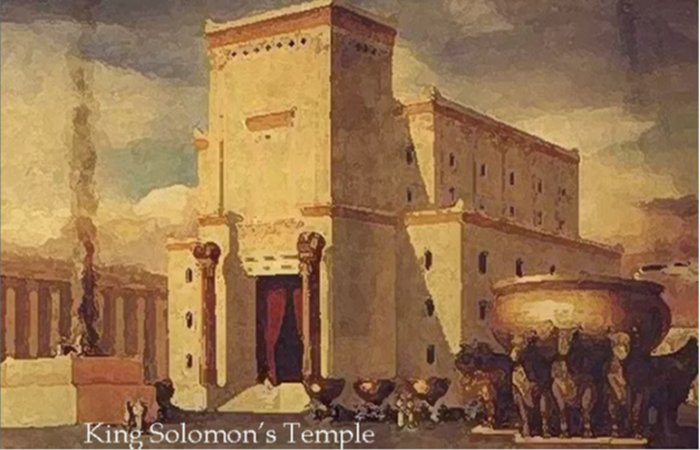 It represents the temple of humanity, knowledge and improvement; the symbol of the goal and, at the same time, the Freemasonry union itself. It’s the path to the divine. In the tradition of Freemasonry, this Temple is a link in early Christian Cabala and Hermetic thought.

Many believe that philosophy becomes directly linked to the past, present, and future of Freemasonry and to King Solomon’s Temple.

Temple worship is considered a progress towards spiritual elevation. There is a difference between a material and spiritual temple that should be constructed in our heart and considered the dwelling place of God. 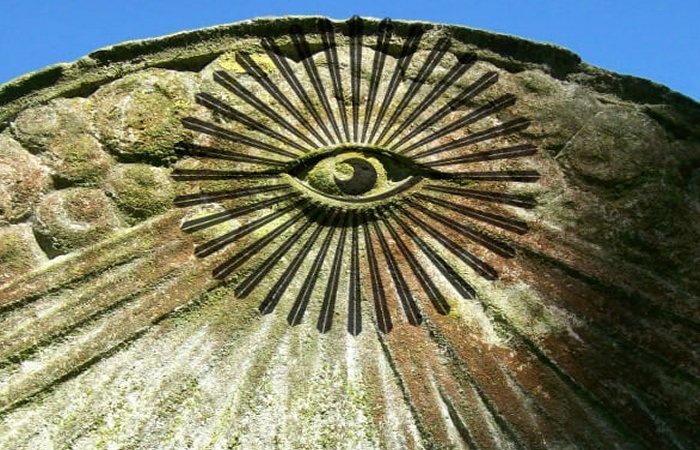 It is a powerful symbol that has been used for hundreds of years, if not longer. Some scholars trace its history to ancient Egypt and the Eye of Horus. The symbol has been an important Christian symbol that can often be found on stained glass windows of churches.

In the United States, the Eye Of Providence is often associated with conspiracies, the Illuminati, the Vatican and the Freemasons, who started publicly using the symbol in 1797.The all-seeing eye of God and

is a reminder that humanity's thoughts and deeds are always observed by God (who is referred to in Masonry as the Great Architect of the Universe).

Usually, the Masonic Eye of Providence has a semi-circular glory below it and is (sometimes) enclosed by a triangle.

Read more about  the Eye Of Providence 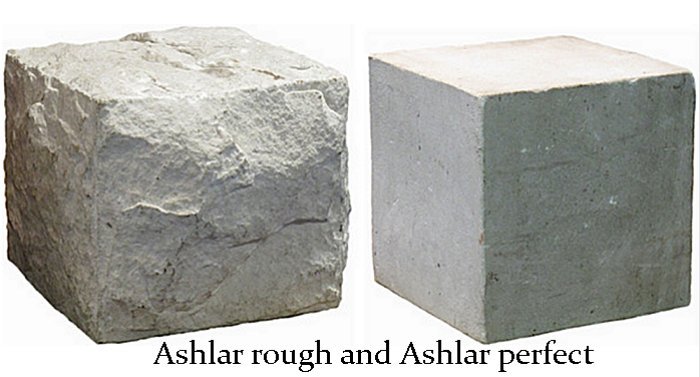 Ashlar rough and Ashlar perfect are not just two pieces of stone but a clear representation of what we’ve and what we hope to be. They symbolize Man's moral and spiritual life.

Ashlars are representation of the very beautiful symbol. The rough and perfect ashlars bear the same relation to each other as ignorance does to knowledge, death to life, and light to darkness. Ashlar rough (rude, natural stone), which masonically, is a symbol of men’s natural state of ignorance and a symbol the profane world. Ashlar perfect is already prepared (hewed, squared, polished and smooth) and as such it’s used in the building. It’s a symbol of the state of perfection attained by means of education.

In essence, in Freemasonry, it means that by means of education and the acquirement of knowledge, a man, who begins as Rough Ashlar (an imperfect stone) improves the state of his spiritual and moral being and becomes like Perfect Ashlar and makes the final journey to the Grand Lodge Above. He may leave behind a reputation as a wise counselor, a pillar of strength and stability, a Perfect Ashlar on which younger Masons may test the correctness and value of their own contribution to the Masonic order. 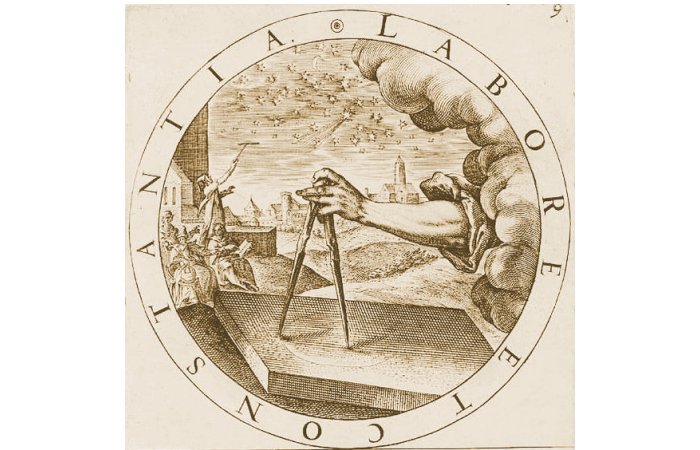 Labor is not punishment but the necessity and nobility, which creates a better society. This is also the reason why Freemasons wear various symbols representing tools used for labor on the cloth.

By working, a man shows respect and appreciation to God. To perform well assigned tasks is a man's highest duty and labor should give a person the greatest happiness and internal satisfaction. To Freemasons labor is worship. 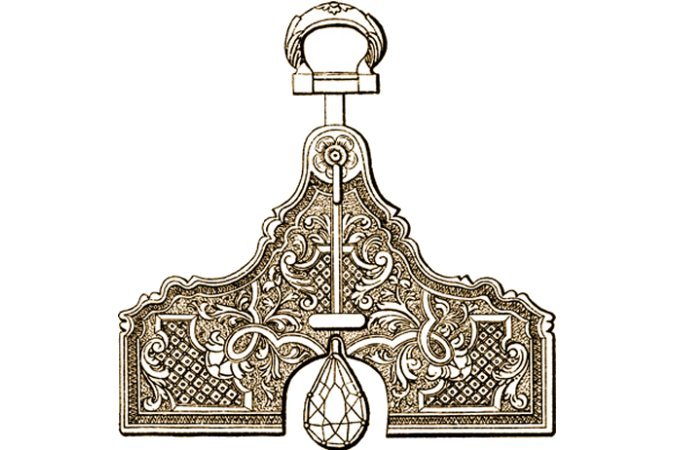 One of the working tools of a Fellow Craft. It is a symbol of the equality of station of all men before God.

The level measures the levelness of horizontal surfaces. It reminds Masons that they’re all living their lives upon the level of time. 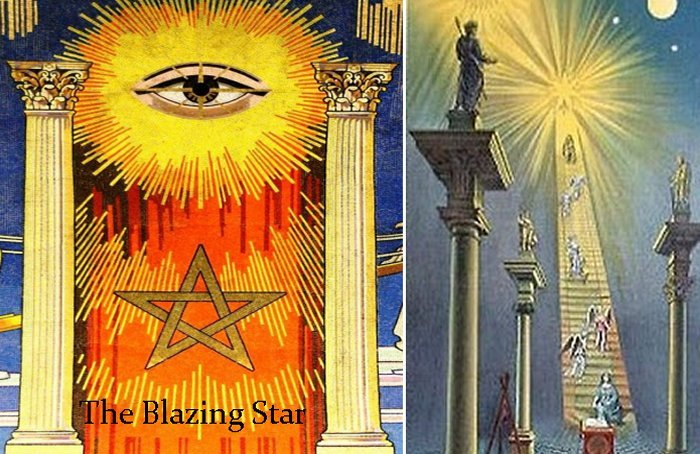 “The Blazing Star in our Lodges, we have already said, represents Sirius, Anubis, or Mercury, Guardian and Guide of Souls. Our Ancient English brethren also considered it an emblem of the Sun. In the old Lectures they said: “The Blazing Star or Glory in the center refers us to that Grand Luminary the Sun, which enlightens the Earth, and by its genial influence dispenses blessings to mankind…” (A. Pike)

“The Blazing Star in the center is said to be “an emblem of Divine Providence, and commemorative of the star which appeared to guide the wise men of the East to the place of our Savior’s nativity.” He goes on to say, “[the Blazing Star or Glory in the center refers us to that grand luminary, the Sun, which enlightens the earth, and by its genial influence dispenses blessings to mankind.” They called it also in the same lectures, an emblem of Prudence.”

The word Prudentia means, in its original and fullest signification, Foresight; and, accordingly, the Blazing Star has been regarded as an emblem of Omniscience, or the All-Seeing Eye, which to the Egyptian Initiates was the emblem of Osiris…” 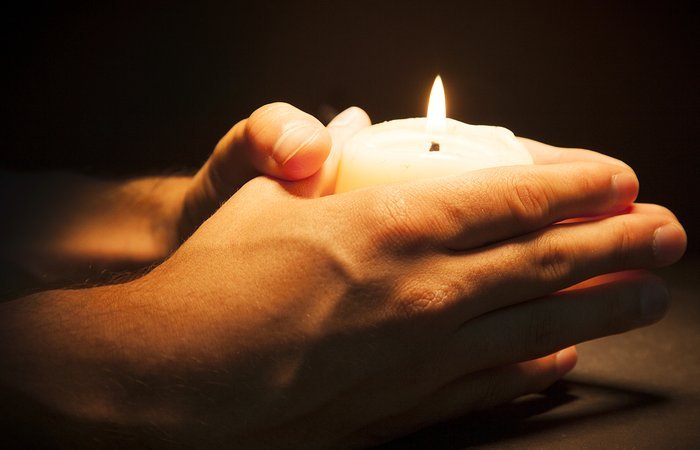 Light is a significant Freemason symbol representing truth and knowledge. When a candidate goes through the initiation and understands the truths of Masonry, he is considered enlightened. Though many ancient civilizations worshipped the Sun, to Freemasons light is not material but a representation of knowledge.

The term leads back to the Sanskrit ruc, meaning ‘shine’. 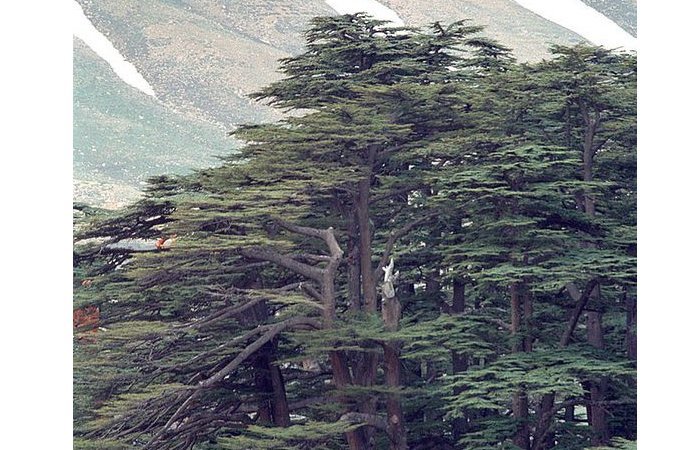 It’s a symbol of eternity (cedar is a long-lived and powerful tree reaching 40 m, from the pine family). Freemasonry is often a symbol of the Lebanese cedar from the Lebanon Mountains (cedrus libani, cedar of Lebanon), which is considered the national tree of Lebanon, appearing on the Lebanese flag, also known as the "cedar land".

This cedar was used to build the Temple of Jerusalem (3 Kings 5,6,7) and the Ark of the Covenant.

It is often mentioned in the Bible, and it often appears in masonic legends, especially for higher grades. 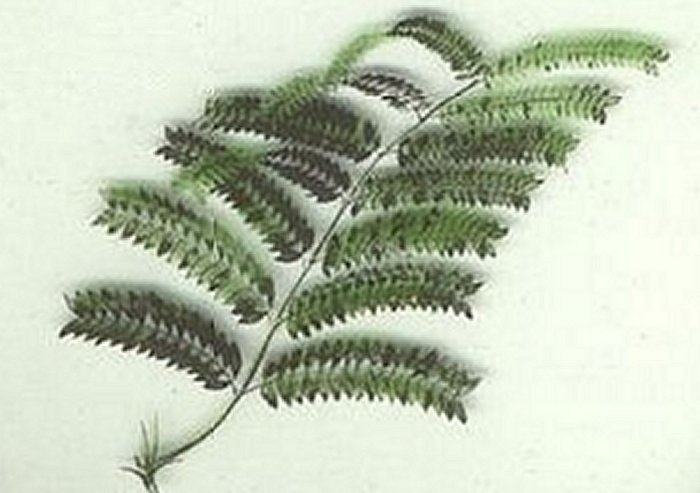 To Freemasons, Acacia is a symbol of immortality of the soul. By its evergreen and unchanging nature this sacred plant reminds a person of that we will all should strive to follow a better spiritual path within us. Our spirituality is as an emanation from the Grand Architect of the Universe, and as such it can never die. Acacia plays an important part in the in the ritual of Freemasonry and the plant is also a symbol of innocence.