Unsung: The Sears Wish Book, a ghost of Christmas past 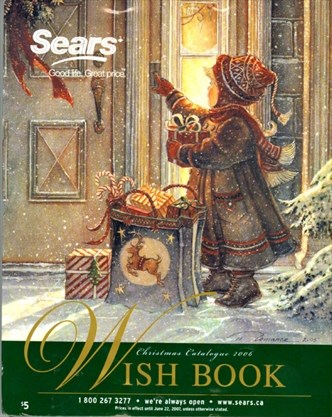 The first Sears Christmas Book, in 1933, was a modest 87 pages. It offered fruitcakes and Mickey Mouse watches and live canaries. By 1968, the catalog had ballooned to 608 pages, and sold quilted robes and copper fondue pots and Electric Football games. That year, Sears retitled it the Wish Book, which was what consumers had been calling it for decades. Wish Book was the perfect name: From 1933 until 1993 — when Sears announced it would no longer publish its Christmas ham-sized monoliths (then continued to dabble, in fits and starts) — the Wish Book was so central to holiday expectations it read like a catalog of middle-class aspiration.

To flip through one today is to see what we thought our homes and holidays should look like. Indeed, for many kids, the arrival of the annual Wish Book was nothing less than the unofficial herald of the holiday season. We like to grumble that Christmas comes earlier every year, but the Wish Book would appear in late summer, just as school was returning; which meant, by Thanksgiving, the catalog was dog-eared and mangled, its pages circled and scissored out, to act as helpful illustrations for wish lists to Santa.

You had months to wish.

About a year ago, Rob Gerlach, a division vice president for Hoffman Estate, Ill.-based Sears Holdings, began picking through the company's archives, assembling an in-house showcase of this history, to remind employees of the struggling retailer how deeply its roots once reached. When he came to the Wish Books, he was flooded with memories. "For myself, I look through our Christmas catalogs from the '70s and I'm remembering my dad, and good times with brothers and sisters. And Christmas itself. It's not about recognizing a G.I. Joe (on a Wish Book page). It's about the emotion the image evokes.

"These catalogs, I see now, were part of what we thought was possible."

Under our Christmas trees, and long after the tinsel was swept away.

So several weeks ago when Sears announced its first Wish Book in ages, I eagerly awaited my copy, expecting a few hours of shameless nostalgia and consumerist dreaming. Then I got a copy and flipped through its thin 120 pages, and a few minutes later, I set it aside. Of course, I am no longer 11 years old, and my mailbox is stuffed with catalogs I never asked for. But toys, once the heart of a Wish Book, filled just six pages. Tools and tool cases — a section I once sped past — got a dozen. What once had the informational density of a phone book, now appeared airy and anemic. This new Wish Book was no more extraordinary, overwhelming or magical than an ad circular.

Understand, there was a time when I would call Sears every day for weeks, asking whomever happened to pick up the phone, when the new Wish Book would arrive. 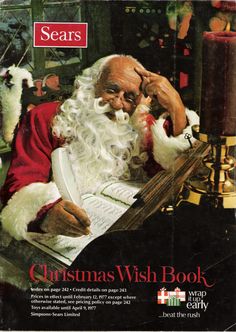 I tried tomorrow, then the tomorrow after that. Once, the person on the other end said he would find out when the Wish Book was arriving. He put down the phone and I could hear him telling someone I called every day, what a pain I was, etc. When he picked up a moment l

The day the Wish Book arrived, my mother would drive me to Sears. As she shopped, I would plop onto a couch in the shoe department and study section after section. It was reality TV before reality TV, a kind of window into other people's rumpus rooms, what they wore to bed and what hobbies they pretended to enjoy. There were chapters on wrenches and telescopes, on air hockey and grandfather clocks; there were "Star Wars" action figures I never saw in actual stores, and screenshots of video games that I would never see again, and images of disturbingly co-operative families playing board games.

It was never a catalog of reality.

At best it was a preview of future yard sales.

But this new Wish Book? A window into the cultural irrelevance of Sears, less a warm retro hug than a slender reminder of the decline of American middle-class expectations.

"I applaud the return of the Sears Wish Book, but look, it's probably an insurmountable challenge to try to return the Wish Book to the kind of cultural importance that it once enjoyed with families," said Jason Liebig, creator of Wishbook Web, a vast online archive of old holiday catalogs. "I mean, that America doesn't really exist these days."

A decade ago, feeling a little nostalgic, Liebig — a former X-Men editor for Marvel, copywriter for the toy industry and now TV host for "Food Flashback" on cable's Cooking Channel — began scanning catalogs, lovingly assembling the pages into addictive, searchable galleries. "I noticed the kind of stuff you find in a Wish Book is exactly the kind that gets diluted now, by the feed of information that comes endlessly from social media, from every corner of the internet. I guess I wanted a reminder of how powerful our communal experiences with catalogs once felt — they're time capsules." 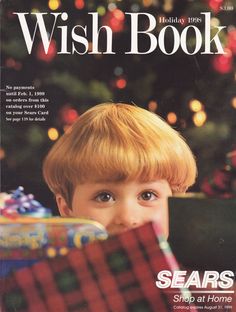 Actually, museums of the American middle-class.

Of the more than 25,000 pages on Wishbook Web, most come from its namesake, and as a history of American cultural change and attitudes, you could do a lot worse: The 1937 catalog offers the Depression-era social ascendance in the form of mincemeat pie. During the Second World War, amid Gen. MacArthur dolls and Hitler ash trays, copywriters insert calls for scrap metal — alongside sober reminders there will be "no toys this year for the children of Greece and Poland." The "American Art of Today" is not reproductions of '40s Abstract Expressionism but the landscapes of middle-brow parlours. Vitamins are offered for frayed nerves in 1944. By the '50s, "Make-It-Snow" offers a White Christmas "at record low prices," direct out of an aerosol can. And at the peak of the baby boom, there are large spreads entirely devoted to rocking horses.

In the mid-1960s, in the melancholy muted Wish Book covers, you can read a yearning for tradition at a moment of vast cultural upheaval, but by 1969, pre-teen models are modelling paisley ascots. There are even a few black models. (The nonsensical motto of the Wish Book that year: "Where uncommon values become the standard.") The 1970s catalogs are full of weightless pursuits, string-art kits, Super Pong; a doll named Suntan Tuesday Taylor, with a muumuu and VW bus, looks like an ad for skin cancer. Within a decade, Wish Books, like the country itself, are pulling hard to the right, espousing "old fashioned" holidays — meaning, checkerboards made from milk cartons.

But what's consistent across each of the decades, and mournful now, is how the pages are not directed at rich or poor but a middle-class American who, presumably, had a steady, unassailable job and, every now and then, a little extra cash: Snow mobiles creep in during the Kennedy administration; and in the 1986 catalog, a full year before the Wall Street crash, the first pages are devoted to furs — mink, coyote, fox.

There's truth there, of course.

There's truth there, of course.

Financial anxiety at the holidays may not be a contemporary concept, yet the income-inequality gap that we know today is not a monster here, lurking just out from view. On the other hand, the Stepford quality of these pages can be unnerving: That perfectly average American who shopped at the middle-class temple of Sears seemingly lived within his or her means always, rarely brushing shoulders with other income brackets or, in catalog after catalog, Italians, Jews, African-Americans — not until models of colour appear in its pages in the late '60s. (Indeed, Liebig said school teachers occasionally contact him, eager to use Wishbook Web to illustrate the subtleties of social change.)

The biggest irony, though, is how central — decades before the arrival of the Wish Book — Sears catalogs had been to development of the country itself, offering a democratic picture of an attainable middle-class urbanity when the nation was quite rural. Covers offered images of cornucopias, spilling forth consumer marvels that only big city cousins could once find. The company had moved from Minneapolis to Chicago in 1887, and by the end of the century it was selling everything from magic lantern — a kind of early home entertainment systems — to the raw materials and schematics needed to construct new homes; within the first decade of the 20th century, Sears was vast enough to sell both wigs and barber chairs. As recently as 1993, when Sears announced the end of its Wish Book, readers recalled in the Tribune how they had learned to read and dress — to simply be — by flipping through Sears Wish Book. When the catalog imploded, R.R. Donnelley & Sons, which had printed the Wish Book on East Cermak since the 1920s, laid off 660 workers. 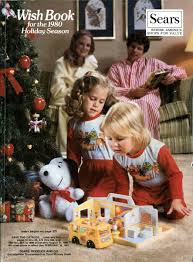 The kind of jobs that supported a Wish Book.

The kind of safety net a shrinking middle-class can't rely on now.

Sears, once the Amazon of its day, had been infamously slow to change (remarkably, it didn't accept outside credit cards like Visa until 1992), yet the Wish Book was probably doomed anyway, at least since the erosion of union membership and rise of automation weakened the middle class. Today, if the classic Wish Book has a cultural successor, it's not the new Wish Book. It's the Neiman Marcus Christmas Book. Have you seen this thing? It's also a window into cultural change, and a museum of prosperity, but way better than a Wish Book. There's no disappointment involved, because you couldn't ever afford its $95 coin purses and $615 scarves, even if you wanted them. It's a catalog of future estate sales, a Wish Book with a clever twist: Thanks to the growing income disparity, for most Americans, it's all wish, no gift. 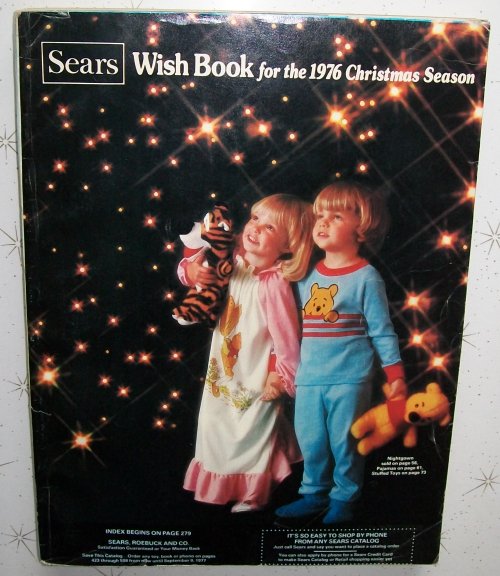