‘The Buffalo Hunt’ Review: The Sacred Ties That Bind

‘The Buffalo Hunt’ Review: The Sacred Ties That Bind

This haunting documentary looks at the ritual of the hunt and its place in the history and identity of today’s Lakota Sioux.

Beldine White Eyes in a scene from the documentary “The Buffalo Hunt.” CreditPhilip Di Fiore 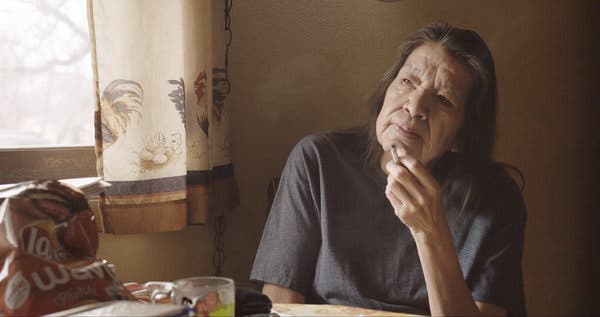 
At first glance, “The Buffalo Hunt” seems fairly straightforward. Under the eye of the film’s director, Philip Di Fiore, the people of the Pine Ridge Indian Reservation in South Dakota take apart a buffalo, using the skin to make drums and splitting up the meat for those who could not attend the hunt, as well as for a communal soup.

It’s that last use around which the documentary eventually coalesces, becoming a striking, poetic look at the Lakota Sioux. (The film, now streaming on Amazon, was born out of the protests at Standing Rock, but it changed focus as the documentary’s producer, Phillip O’Leary, got to know the Pine Ridge people who had come in solidarity.) The process of killing a buffalo is deftly juxtaposed with what the buffalo will be used for, and with the way it serves the community and brings it together.

Interstitial scenes help paint a more comprehensive picture as the film’s subjects discuss problems with drug use, generational trauma and the temptation to leave the reservation. The droning score, composed by Jason Staehler Hill and Ari Ingber, and Di Fiore’s penchant for cutting to images of the bare and forbidding landscape cast a pall over the proceedings, but the documentary feels more hopeful than not.


Despite the hardships they’ve suffered and continue to endure, these are people who have learned how to survive and to provide for one another. The little details — the cook whose T-shirts all seem to reference marijuana, the old man whose shedding of his jacket is intercut with the skinning of the buffalo — come across as loving. After all, the ultimate purpose of the buffalo is to feed and nurture.

Ya Ho and Great Love. The posts when emailed by TI (unlike some other sites) reproduce the article in its entirety so I don't always have to go there to read the piece. But with the visuals and videos that attend the vertical scrolling, coming to the page is always a moving experience. Thank you.