5 ESSENTIAL MUSHROOMS FOR YOUR HOME APOTHECARY Maitake mushroom’s common name comes from the Japanese words for “dance” (mai) and “mushroom” (take)—the dancing mushroom! There are competing theories about the origin of the name, but one explanation holds that those who found this mushroom in the wild would break into a spontaneous dance of joy, possibly because this mushroom was so revered that it was worth its own weight in silver coin!

As with other immune-active mushrooms, maitake really shines in modulating immune function. The beta-glucan polysaccharides found in maitake, knowns as “D-fraction,” have been extensively researched for use in a range of immune conditions.

Maitake is also of interest for cardiovascular and metabolic health, as it may have hypoglycemic and hypotensive activity, help regulate blood lipid levels, and assist in weight loss, though these actions have not been confirmed through clinical trials. Preclinical trials have shown that it may be particularly helpful to restore insulin sensitivity and regulate blood glucose in people with type 2 diabetes, and in one clinical trial, maitake polysaccharide extract was found to improve insulin sensitivity and induce ovulation in patients with polycystic ovary syndrome (Chen et al., 2010).

Maitake may lower blood glucose levels and could have an additive effect with oral hypoglycemic agents (Brinker, 2010). When using maitake as a decoction, 3-7 g of the dried mushroom can be used per day. Alternatively, fresh or dried mushrooms can be used in cooking—it is considered an excellent culinary mushroom, with a rich, buttery flavor and meaty texture. Consuming maitake in the diet is a great way to benefit from its properties! 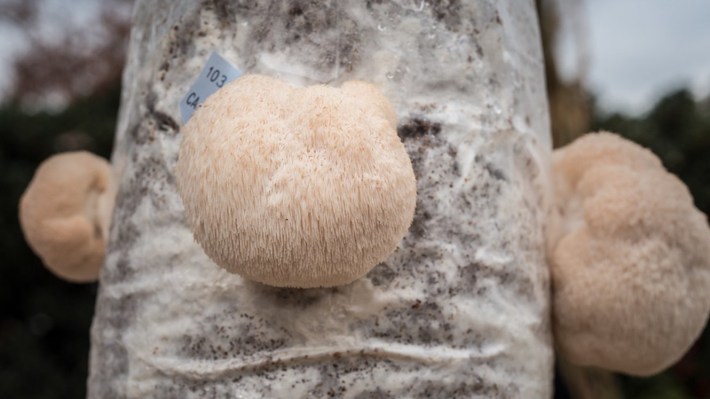 Lion’s mane is among the easily recognized toothed mushrooms; it’s also been called satyr’s beard and pom pom mushroom, which give a very accurate picture! There are a number of Hericium species with a similar appearance that can be found in the United States, though none are truly common. H. erinaceus is the most well-known and widely studied species and is preferred for use in herbalism.

Lion’s mane is best known as a nervous system tonic or trophorestorative. It shares the immunomodulant and anti-inflammatory activity of other mushrooms used in herbalism, which may be one part of its use in neurodegenerative disorders with an inflammatory component such as Alzheimer’s and Parkinson’s disease.

Lion’s mane is considered to strengthen the Stomach and Spleen, and is used for digestive support in Chinese medicine. Laboratory studies have found that polysaccharide-rich extracts such as that from lion’s mane promote the health of the gastrointestinal mucosa, protect against gastric ulcers, and may help eradicate the Helicobacter pylori bacterium (He et al., 2017).

Finally, lion’s mane is traditionally used to calm the shen, which loosely translates as spirit. Herbs that calm shen are frequently helpful in anxiety, depression, and similar mood disturbances, and have a gently uplifting quality. This aligns with clinical evidence that shows lion’s mane can help alleviate depression and anxiety and enhance mental focus (Nagano et al., 2010), without any overly stimulating effect.

To make a lion’s mane decoction, use 3-5 grams of the dried fruiting body. It is also a delicious edible, often referred to as “crabmeat of the woods!” Turkey tail is a common and useful mushroom that’s relatively easy to find and identify. Simply look for fan-shaped clusters with concentric bands of varying colors, often found on dead or dying hardwood trees, logs, and stumps throughout the rainy season. Turkey tail dries well and can be readily prepared into a neutral-tasting decoction or incorporated into healthful broths and savory soups.

Turkey tail is best known for its immunomodulant polysaccharides, which are used to increase the activity of innate immune function. It has been shown to be particularly helpful to those with cancer, helping to protect against the side effects of chemotherapy and radiotherapy, and to those with chronic fatigue syndrome (CFS)/myalgic encephalomyelitis (ME) by increasing quality of life (Powell, 2014).

In Chinese medicine, turkey tail is sometimes used when infections and inflammation are present in the digestive, urinary, and respiratory systems (Rogers, 2011). It may also help ward off outbreaks of herpes simplex virus by stimulating immune function and by inhibiting viral activation (Powell, 2014).

As a general precaution, individuals using immunosuppressive drugs should use turkey tail under the guidance of an experienced practitioner (Brinker, 2010).

To use turkey tail, a decoction of  3-6 g of dried mushroom can be used each day for acute conditions and 1-2 g a day for tonic or ongoing conditions (Powell, 2014). 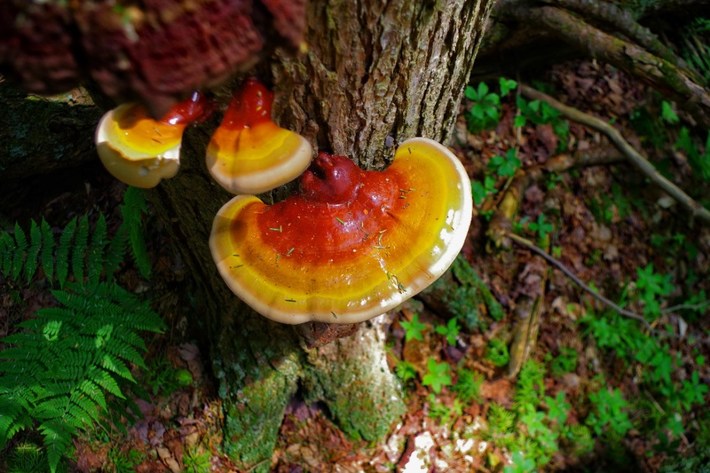 Reishi is a richly colored mushroom with a shiny, lacquered appearance when wet. When trekking through a misty forest on a drizzly autumn afternoon, catching sight of these lustrous shelf mushrooms can certainly bring brightness to your heart!

In the strictest sense, the common name “reishi” refers specifically to red reishi (Ganoderma lucidum), a single mushroom species that grows only in Northern Europe and parts of China. However, there are actually several species of Ganoderma that are more broadly lumped together under the common name “reishi,” and are considered completely interchangeable in commerce and herbal practice in both Chinese and Western herbalism.

A number of Ganoderma species, such as Oregon reishi (G. oregonense), artist’s conk or white reishi (G. applanatum), and hemlock reishi (G. tsugae), have been found to contain very similar immune-active polysaccharides, ganoderic acids, and other important terpenoids found in Ganoderma lucidum, along with glucans and other branched-chain polysaccharides (Sitkoff, 2015). Reishi has been extensively studied for its use in cancer, and it is frequently used in both Chinese and Western herbalism as part of adjunctive support during cancer treatment. In addition to supporting the innate immune response, compounds in reishi may be directly cytotoxic to cancer cells and prevent the growth and metastasis of tumors.

Red reishi (Ganoderma lucidum) is traditionally used as a longevity tonic in Chinese medicine; among other properties, it is used to uplift the spirit, strengthen the Heart, tonify qi and nourish the Blood (Powell, 2014), qualities that many Western herbalists associate with improving mood, energy, and immune function. These activities also align with reishi’s use in Western herbalism as an adaptogen to help restore function to the nervous and endocrine systems and modulate the body’s response to stress.

Reishi (Ganoderma spp.) is also used as a tonic for the lungs and may be helpful for support during asthma, bronchitis, and other respiratory conditions. It is frequently suggested for use in managing allergies and allergy-induced asthma, as it contains terpenoid compounds that inhibit histamine release, while immune-modulating polysaccharides can help to rebalance the underlying immune reactivity that causes mast cell activation and promotes allergic response. In Chinese medicine, white reishi (Ganoderma applanatum), also known as artist’s conk, is thought to have the most specific effect on the Lung (Hobbs, 1996; Sitkoff, 2015).

Reishi is considered energetically drying and neutral in temperature (neither warm nor cool), though this may vary slightly between different species.

Reishi should be used with caution by individuals taking immunosuppressant, anticoagulant, or antiplatelet medications (Gardner & McGuffin, 2013). A decoction of 3-12 g of dried mushroom can be used daily. If using reishi in tincture form, 4-8 mL (1:5, 30%) can be used 3 times a day (Winston & Kuhn, 2008). 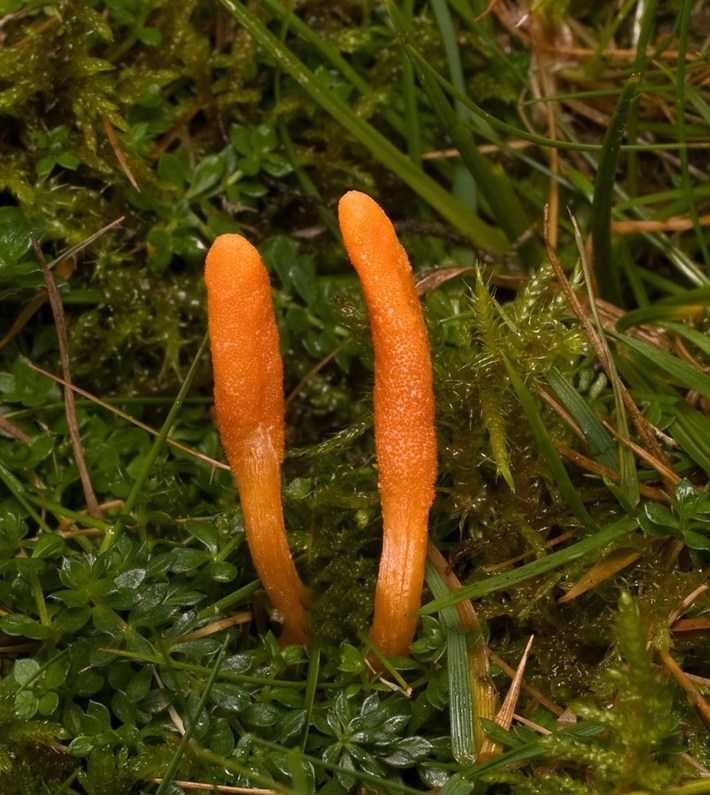 Sometimes colorfully described as “ant zombie fungus,” cordyceps is an entomopathogenic fungus that survives by parasitizing the bodies of insects. After cordyceps spores take up residence in their caterpillar host, mycelia grow to eventually completely fill the insect’s body, with the club-shaped mushroom eventually emerging from the head to release spores and repeat its life cycle. Sounds lovely, right?

In Chinese medicine, cordyceps have a sweet taste and neutral energetics. It is used to replenish the Kidney, soothe the Lung, stop bleeding, and eliminate phlegm. In addition to its use as an immunomodulant, cordyceps is also used in many instances of persistent fatigue, recovery after illness, and for support of respiratory, kidney, and sexual health (Hobbs, 1996; Lin & Li, 2011).

The use of cordyceps in Chinese medicine as a Kidney tonic is connected to actions that Western herbalism relates to sexual function and energy or vitality. Cordyceps is sometimes lauded as an “aphrodisiac” or sexual tonic, and it can certainly be helpful with low libido and other sexual hypofunction issues, but that may have as much to do with increasing energy and vitality as with actual effects on sex hormones.

Cordyceps has been demonstrated to improve aerobic capacity, fatigue resistance, and cellular energy production, and reduce the amount of oxygen needed to fuel the heart (Winston & Maimes, 2007). It has been used to support respiratory function, including chronic obstructive pulmonary disease (COPD) and asthma. Multiple clinical trials have found evidence of potential benefit from use of cordyceps extracts in COPD, resulting in improved lung function, arterial oxygen pressure, exercise tolerance, and quality of life (Yu et al., 2019).

Cordyceps is also used to support and protect the kidneys. Several clinical trials have looked at the use of cordyceps for those with chronic kidney disease, kidney failure, and kidney transplant. Trials demonstrated that patients treated with cordyceps had better kidney function, fewer instances of liver damage, reduced nephrotoxicity, and fewer instances of organ rejection (Ong & Aziz, 2017). Likewise, a meta-review found multiple controlled trials in which treatment with cordyceps improved markers of kidney function in patients with chronic kidney disease (Zhang et al., 2014).

Since there’s no DIY option for cordyceps, you’ll need to purchase cordyceps or cordyceps extract, and it’s important to be particularly judicious. There are some significant quality control issues with any wild cordyceps products—not only are wild cordyceps wildly expensive, these parasitized caterpillar bodies may also host other types of less-desirable fungi (Winston & Maimes, 2007), including the kind we often refer to as “mold” and really shouldn’t ingest! Commercially grown cordyceps mycelial extract is available as an alternative to wild cordyceps and does not have the same contamination concerns.

Thanks SunKat for adding information here. I wasn't sure if I was allowed to place pictures here.

You may add what you wish to any post Mystic Wolf :)

Permalink Reply by Mystic Wolf on April 28, 2020 at 9:20pm
I will get back to the group when I have the time. I love working with mushrooms and enjoying mushroom lore