Up close with the 7,000-year-old Dolmen of Guadalperal. 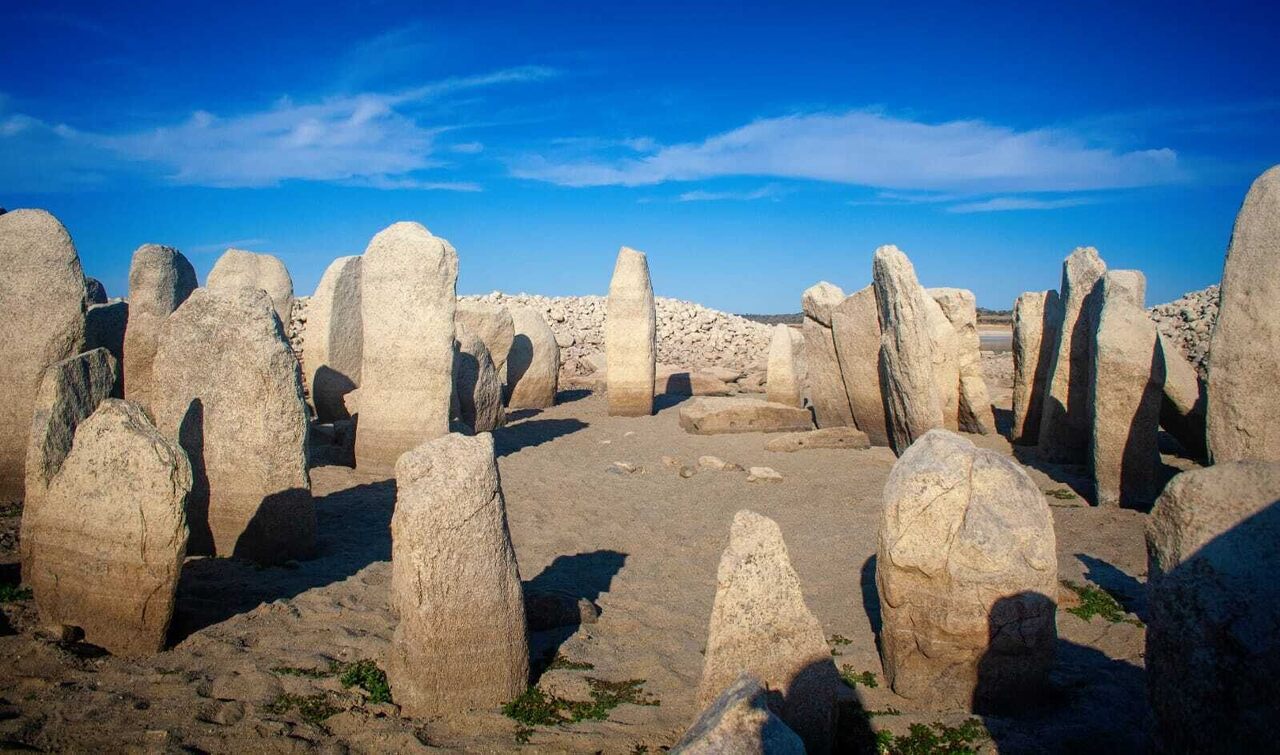 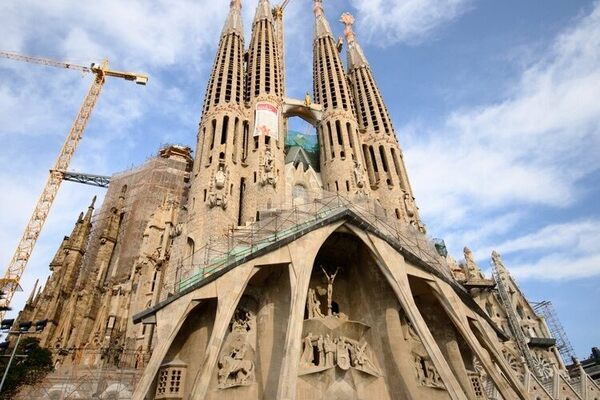 THIS SUMMER HAS BEEN UNUSUALLY scorching across Europe and beyond, and things have only grown more intense in the already hot and dry region of Extremadura in Spain. Months into an official drought that could be developing into a mega-drought, local farmers are facing the loss of hundreds of millions of euros. Many think this is just a sign of things to come.

Droughts, and the way that they strip the land of plant cover and drain lakes and reservoirs, for all the problems they cause, are often a boon for archaeologists. The water level of the Valdecañas Reservoir in the province of Cáceres has dropped so low that it is providing an extraordinary glimpse into the past.

“All my life, people had told me about the dolmen,” says Angel Castaño, a resident of Peraleda de la Mata, a village just a couple miles from the reservoir, and president of the local cultural association. “I had seen parts of it peeking out from the water before, but this is the first time I’ve seen it in full. It’s spectacular because you can appreciate the entire complex for the first time in decades.”

The dolmen he’s talking about is known as the Dolmen of Guadalperal, the remains of a 7,000-year old megalithic monument consisting of around 100 standing stones—some up to six feet tall—arranged around an oval open space. It takes hours of hiking to get to the dolmen, which is now a few dozen yards away from the edge of the tranquil blue water. Visitors today are more likely to see deer than guards. Traces of aquatic plant life in the sand show that the site is dry and accessible only temporarily. 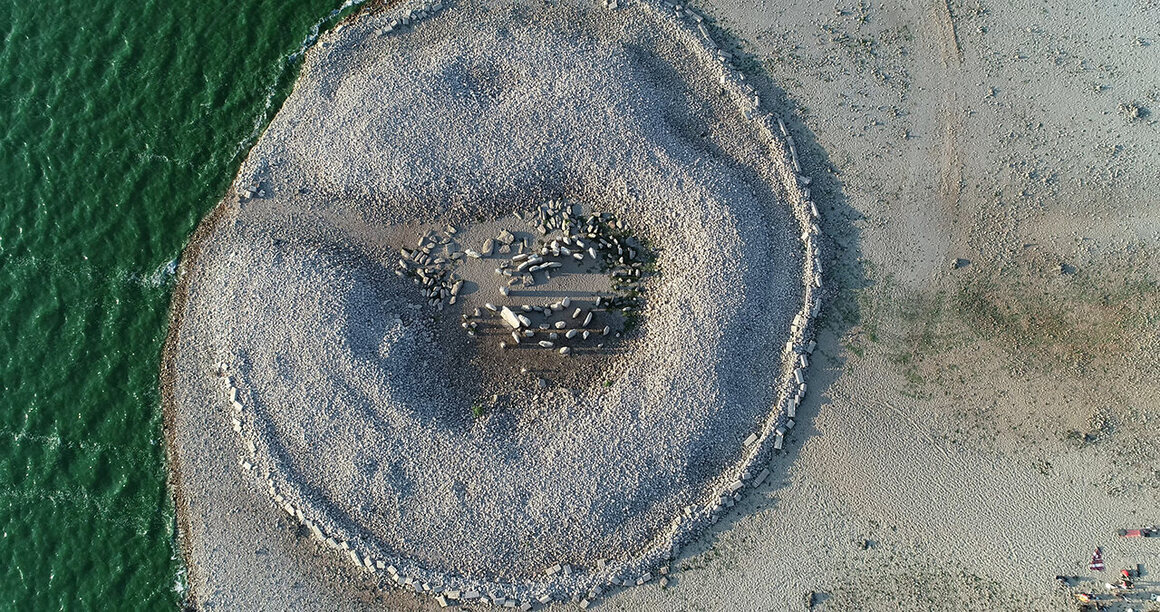 What Poop Can Teach Us About an Ancient City's Downfall

Cahokia's decline is at least partially a story of climate change.
READ MORE 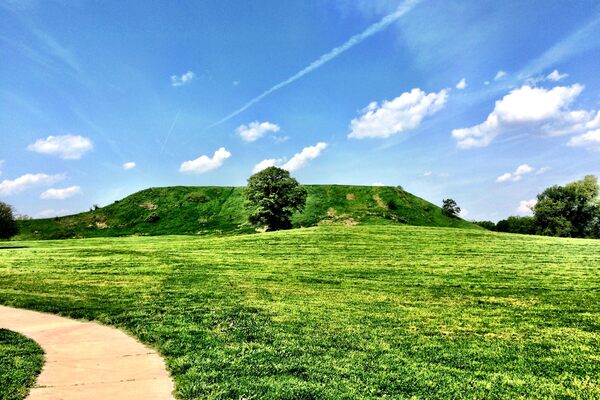 “When we saw it, we were completely thrilled,” Castaño says. “It felt like we had discovered a megalithic monument ourselves.”

Archaeologists believe the dolmen was likely erected on the banks of the Tagus River in the fifth millennium BC, as a completely enclosed space, like a stone house with a massive cap stone on top. And though it had been known, perhaps even damaged, by the Romans, it had faded beyond memory until German archaeologist Hugo Obermaier led an excavation of the site in the mid-1920s. Obermaier’s work wasn’t published until 1960, but by then the tide of the 20th century was on its way to the ancient site.

In his quest to modernize Spain, Francisco Franco’s regime carried out a number of massive civil engineering projects, including a dam and reservoir that flooded the Dolmen of Guadalperal in 1963. Archaeological studies and environmental impact reports before such projects weren’t regular practice at the time, says Primitiva Bueno Ramirez, a specialist in prehistory at the University of Alcalá. “You couldn’t believe how many authentic archaeological and historic gems are submerged under Spain’s man-made lakes.” 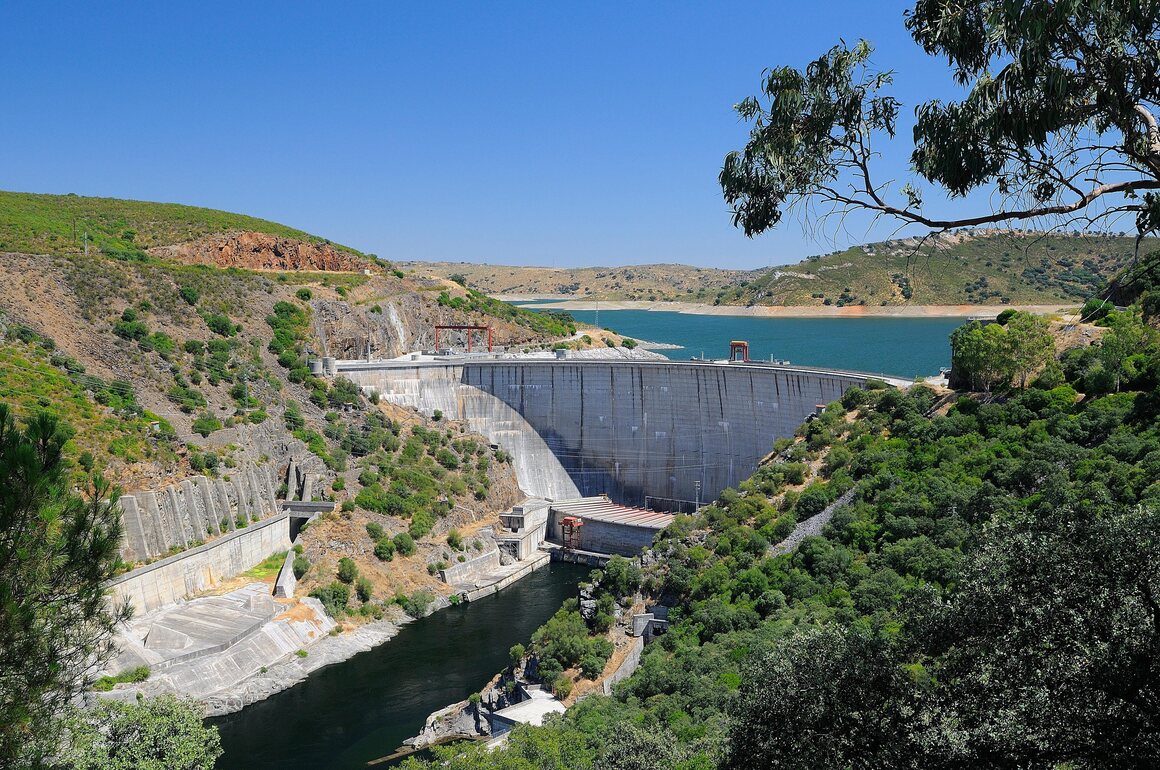 The Valdecañas Reservoir brought water and electricity to underdeveloped parts of western Spain, but that came at a cost. “The flooding was tragic on many levels,” says Castaño. “From the historic point of view, it drowned these megalithic monuments and most of the remains of a Roman city called Augustóbriga. [Portions of the ruins were relocated to a nearby hilltop.] From the human point of view, an inhabited town was flooded and people were forced to move out of their homes.”

As water levels in the reservoir have fluctuated over the years, the tips of the tallest stones sometimes become visible, but it is a rare occurrence—so far—for the entire structure to be high and dry. Dolmens like this one were tombs or sites for ritual—think Stonehenge—and ones like it appear in different cultures all over the world, from Ireland to India to the Korean Peninsula. One of the standout attributes of the Dolmen of Guadalperal is a large stone, or menhir, that marked the entrance. A human figure is engraved on its front, along with a long squiggly line on another face. Scientists believe it is a representation of a snake. 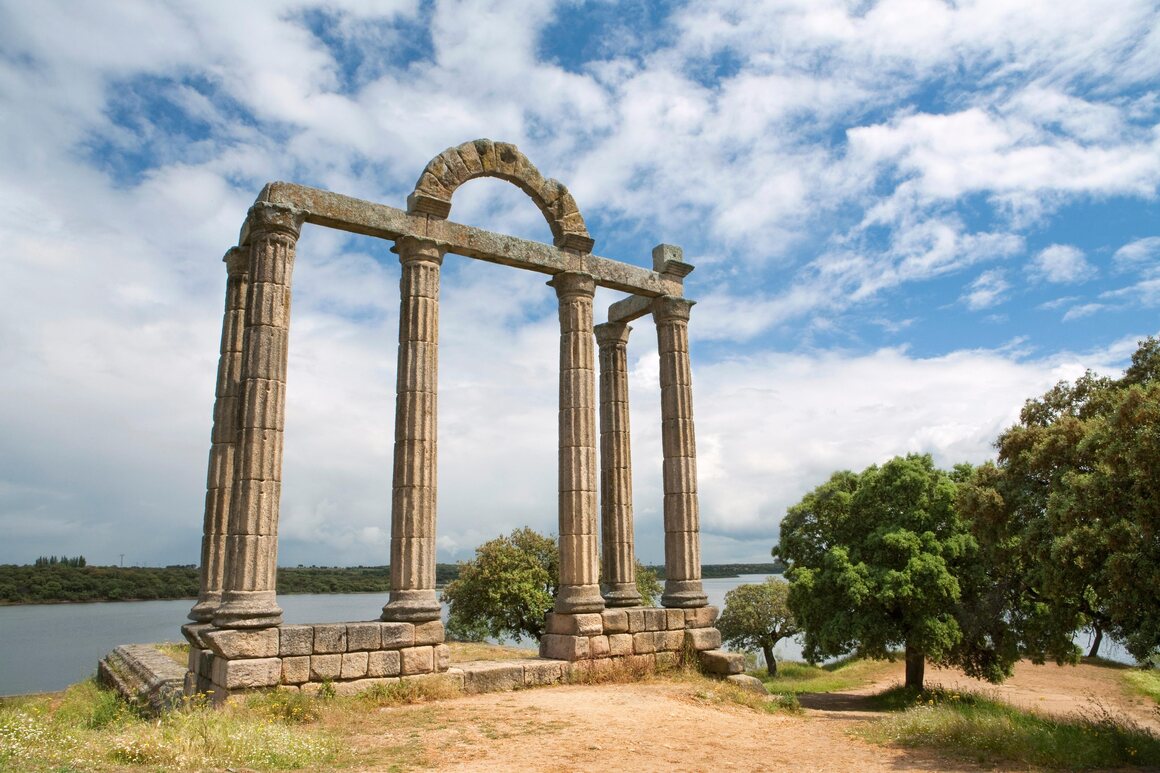 A temple from the Roman ruins of Augustóbriga was relocated to a hilltop when the rest of the city was flooded. AGE FOTOSTOCK / ALAMY

When Castaño, a philologist by trade, saw it, he saw an ancient map of the now-flooded portions of the Tagus River. It’s not a widely accepted theory, but there are similarities between the “squiggle” and the course of the river. If he’s right, it could represent one of the oldest maps ever found. “It was intuition,” he says. “Before the area was flooded, the river had a strange bend that matched where the snake’s head was supposed to be. I rushed to consult an old map of the river, and I realized that the curvy line corresponded nearly 100 percent to the river’s path.”

Bueno, who studied the monument in the 1990s, when the waters were low enough for the top half of the dolmen to emerge, has her doubts. “I appreciate his enthusiasm, but from my archaeological understanding, I would say that the line is geometric and similar to ones found in megalithic art across Europe. In this case, it could be identified as a serpent.” She adds that further studies are needed. 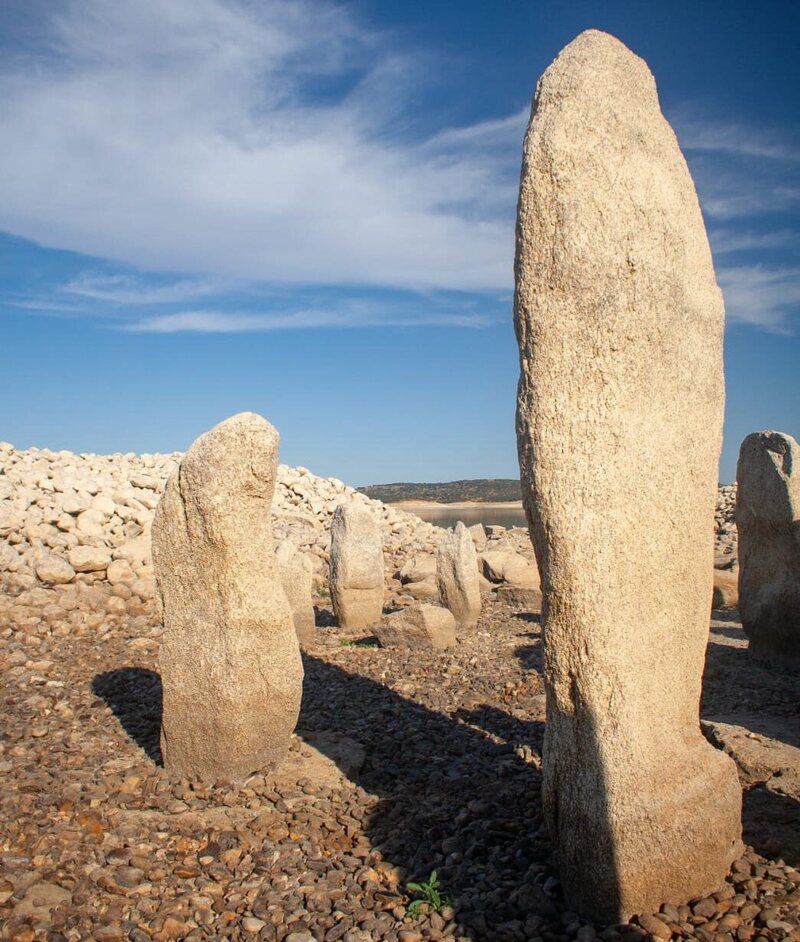 While the Dolmen of Guadalperal has widely been compared to Stonehenge—and rightly so—the Spanish example was once an entirely enclosed space. And it could also be around 2,000 years older.

When it was intact, according to Bueno, people would have entered through a dark, narrow hallway adorned with engravings and other decorations, probably carrying a torch. This would lead to an access portal into the more spacious main chamber, which had a diameter of around 16 feet, where the dead would be laid to rest. It’s also likely that the monument was oriented around the summer solstice, allowing, for just a few moments a year, the sun to shine on the community’s ancestors. Construction of such a large space, with such heavy materials, would have taken a great deal of both effort and ingenuity. 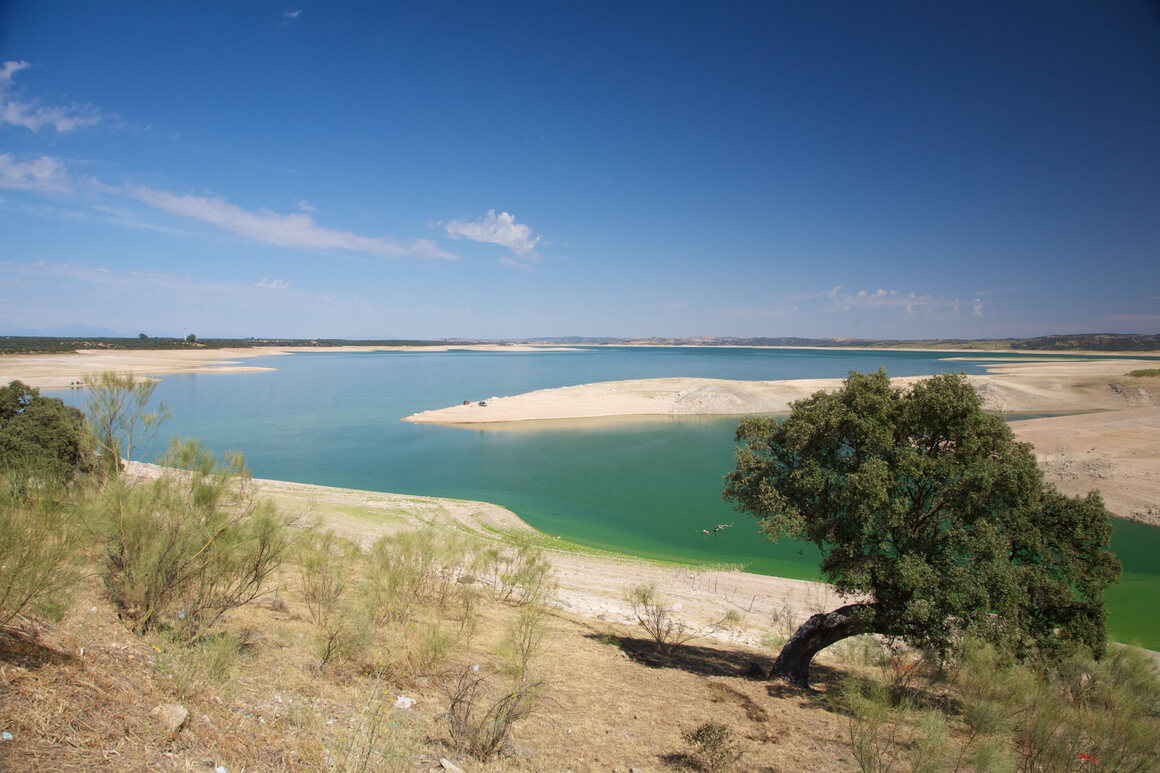 Extremadura, where the Valdecañas Reservoir is located, is a dry region, grown even drier. YAY MEDIA AS / ALAMY

According to Bueno, archaeologists have also found that this region presents some of the earliest evidence of humans making flour (more than 8,000 years ago) and using honey (more than 7,000 years ago). By the third and fourth millennium BC, they were even brewing their own cerveza.

Odd as it might seem for something that is 7,000 years old and made of stone, the fate of the dolmen now depends on Madrid. The granite stones are porous and vulnerable to ongoing erosion. After more than 50 years underwater, some stones that were standing when Obermaier studied them now lie flat, others that were once intact are now cracked. Castaño and his organization are urging the government to move the stones to permanently dry land, but Bueno worries that this could just accelerate the damage, especially if the process is rushed, without extensive study first. And within a month the dolmen could again be swallowed up by the lake.

“Whatever we do here, needs to be done extremely carefully,” Bueno says. “We need high-quality studies using the latest archaeological technology. It may cost money, but we already have one of the most difficult things to obtain—this incredible historic monument. In the end, money is the easy part. The past can’t be bought.”

This is amazing, there have been several places where they have found some sort of Stonehenge in the World, it must have been a common fad at some prehistoric time...