The 6,000-Year-Old Underground Labyrinth: The Ħal Saflieni Hypogeum of Malta Located in Paola in Malta, the Hypogeum of Hal Saflieni is considered the oldest prehistoric underground temple in the world. It is a truly ancient structure dating back to 4000 BC. The experts believe that what we are looking at is a sanctuary, a temple and necropolis, as the remains of more than 7,000 individuals have been recovered by archaeologists. We know there was once a surface shrine that marked the entrance to the Hypogeum. This may have once started out as a natural cave, that was greatly expanded using antlers, flint, chert and obsidian tools to cut through the soft limestone bedrock. There was an upper level, which was the earliest, possibly from around 4000 BC, a middle level and a lower one, which came later, and finds suggest it was used up until around 2500 BC. The cave system is highly skilled piece of work, an excellent example of ancient engineering, as they used a careful direction of light from the surface to penetrate down to the lowest levels. Intricate red ocre paintings covered the ceilings with motifs of spots, spirals and honeycombs. Of the several thousands bodies found inside the Labyrinth, many were found to have elongated skulls, another mystery yet to be truly understood. Watch the video to learn more about the Hypogeum of Malta and see the breathtaking work of our ancient ancestors. 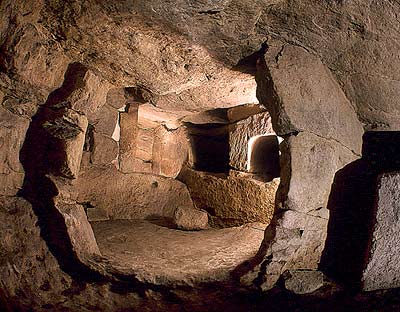