Druids, bards and rituals: What is an Eisteddfod?

The Eisteddfod, as it's commonly known, is a week-long event that takes place every year during the first week of August, with the venue alternating between north and south Wales.

Steeped in the bardic tradition, the Eisteddfod is awash with lavish ceremonial rituals involving druids, swords, and mystical symbolism, which to the uninitiated appear to be no more than strange pagan rites. So how did an 18th century chancer and forger con the Welsh to found Europe's largest cultural contest?

How did it start?

The earliest recorded eisteddfod was held in 1176, when Lord Rhys hosted a gathering of bards, musicians and performers at his castle in Cardigan.
But it wasn’t until the 18th and 19th centuries that the eisteddfod developed into a form recognisable as a precursor to the modern National Eisteddfod.
Its aim was to create a burning interest in poetry, raise standards and create a focal point for the arts in Wales.
The history of the elaborate, modern-day ceremonies, in which poets compete for the prestigious chair or crown, can be attributed to the idiosyncratic fantasies of one man – Iolo Morganwg.
A stonemason by trade, but easily the most knowledgeable man of his generation about early Welsh literature, he began to expound bogus theories on bardic lore and contrived a past for Welsh literature which it had never possessed.
He invented the concept of an assembly of bards - Gorsedd y Beirdd - falsely claiming it harked back to the time of the ancient druids. Gorsedd literally means throne, but the meaning has been extended to mean an assembly of people.
As many of Iolo Morganwg’s theories were based on fact, no one disputed his claims, and the first meeting of the Gorsedd was held on 21 June 1792 on Primrose Hill in London.
The Gorsedd has been an integral part of the Eisteddfod since 1818, and the first official National Eisteddfod as we know it today took place in Aberdare in 1861. 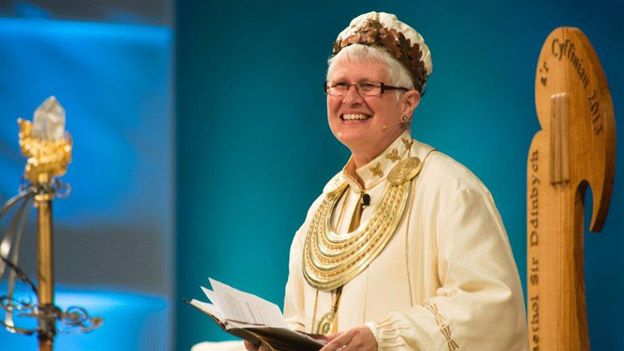 The head of the Gorsedd is the Archdderwydd (Archdruid), who is elected for a term of three years and presides over the Gorsedd ceremonies during Eisteddfod week. These ceremonies are held to honour literary achievements among Welsh poets and writers. The Archdruid must have won the chair, the crown or the Prose Medal in the past. He or she is invested with a sceptre, crown, breastplate and ring. 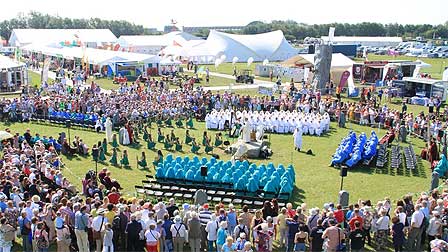 Colourful pageantry and spectacular rituals are an integral part of the eisteddfod and no eisteddfod would be complete without the following Gorsedd ceremonies.
Proclamation ceremony 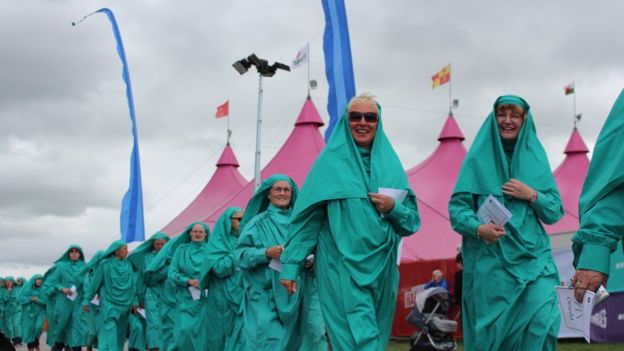 Gŵyl y Cyhoeddi takes place exactly one year and a day in advance of the next Eisteddfod. This ceremony is held within a circle of stones - Cylch yr Orsedd - which is erected on the site of each National Eisteddfod as a mark of having visited the area. Crowning of the bard
Seremoni’r Coroni (crowning ceremony) is one of the main events of the Eisteddfod and is held on the Monday afternoon of each Eisteddfod. In an impressive spectacle, a unique crown, fashioned by a local craftsperson, is awarded for the best poem written in free verse.

Prose Medal
Y Fedal Ryddiaith (the prose medal) is the prize for best volume of prose. It is held on the Wednesday afternoon and the winner is awarded a medal. The prize is celebrated in an official ceremony similar to the chairing and crowning of the bards.

Chairing of the bard
The Friday afternoon of every Eisteddfod culminates with the elaborate Seremoni’r Cadeirio (chairing ceremony). A unique chair, or throne, created by a local carpenter, is awarded for the best poem written in a traditional form of Welsh verse using a strict metre known as cynghanedd.

Other ceremonies
The pavilion plays host to other notable ceremonies during the week. Dysgwr y Flwyddyn (Welsh learner of the year), the Drama Medal and the Daniel Owen Memorial prize for best novel are all honoured, albeit on a smaller scale than the main Gorsedd ceremonies.