Saint Patrick, Druids, and the Snakes: The Truth is in the Middle The one day of the year when, for better or worse, Western culture allows me to claim my non-existent inner Irishman.

There are many stories and legends about the fascinating life of St. Patrick. One of the most famous legends recounts how this great 5th century saint banished all of the snakes from Ireland. Bad snakes. Bad.

My work at the Raven Foundation during the last few years has taught me to be suspicious of such legends. In fact, we might call them myths. Myths cover up scapegoating of human beings by telling the story in a more innocuous way. So, instead of saying we banish humans, we say we banished snakes.

Interestingly, the last glacial period (some 10,000-100,000 years ago, depending on whom you ask) beat St. Patrick to the snake banishing. But, Christian tradition has given Patrick all the credit. So, if there weren’t snakes around during Patrick’s day, what’s with the legend?

We do know that St. Patrick was a missionary to Ireland. His goal was to convert the pagan Irish to Christianity. From all accounts, he was very successful. We know the pagans of Ireland as the Druids. Their symbol was … the snake.

Today, Christians assert that St. Patrick only banished a sacrificial Druid religion, an expulsion symbolically represented by the banishment of snakes. Pagans, on the other hand, claim that St. Patrick forced Christian conversion with the threat of violence, and actually killed many Druid priests who refused to convert.

I’m not interested in glorifying or demonizing either side. The truth probably lies somewhere in the middle. Maybe the best we can learn from the tradition of St. Patrick and the Druids is that we humans have a long tradition of scapegoating one another. We continue to demonize our scapegoats. Republicans and Democrats, Christians and Muslims, rich and poor – we tend to think that we are the good guys and they are the bad guys.

All the while neglecting that the truth is probably somewhere in the middle.

Adam Ericksen blogs at the Raven Foundation, where he uses mimetic theory to provide social commentary on religion, politics, and pop culture.

I agree with his viewpoint that the truth lies somewhere in the middle. However, I think he shoudl use the word "legend" and not "myth" as I  see myth as a product of the Jungian Collective Unconscious whic transcends the scapegoating behaviours of out of tune humans. 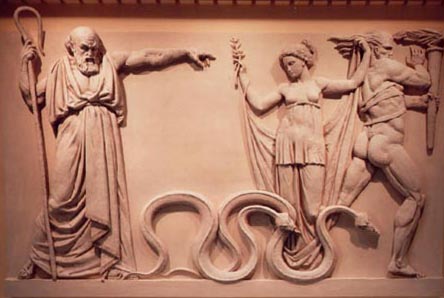 To Pagan Ophites, St Patrick is just like St George - a mass murderer, and so you won't find anyone honoring him. It would be akin to honoring Hitler or Idi Amin.

The fact of the matter is, that all and any references to 'slaying the Dragon' or suchlike actually mean the wanton destruction of Pagan Temples - called Dracontia - and the murder of both Druid, Witch and Pagan devotee alike.

The intent was to wipe out any vestige of indigenous spirituality, and - well, it didn't work.

Trust and forgiveness are hard to regain, especially seeing as the persecutions continue albeit on every other level except for spearing, slaying and burning alive, which they aren't allowed to do anymore.

If one considers the scope of the atrocities committed by the Universal Church against Pagans, it would be like asking us to forgive the Holocaust if we were Jewish, in retrospect.

Terrible indeed! I have felt for the Celtic communties and their needless wanton destruction at the hands of misguided christians for many years now. Thanks for sharing this truth Zep