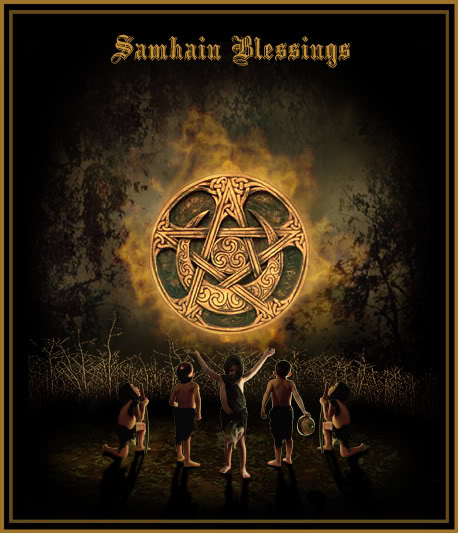 To the ancient Celts, the year had two "hinges". These were Beltaine (the first of May) and Samhain, (the first of November), which is also the traditional Celtic New Year. And these two days were the most magical, and often frightening times of the whole year.

The Celtic people were in superstitious awe of times and places "in between". Holy sites were any border places - the shore between land and water (seas, lakes, and rivers), bridges, boundaries between territories (especially when marked by bodies of water), crossroads, thresholds, etc. Holy times were also border times - twilight and dawn marking the transitions of night and day; Beltaine and Samhain marking the transitions of summer and winter. Read your myths and fairytales - many of the stories occur in such places, and at such times.

At Samhain (which corresponds to modern Halloween), time lost all meaning and the past, present, and future were one. The dead, and the denizens of the Other World, walked among the living. It was a time of fairies, ghosts, demons, and witches. Winter itself was the Season of Ghosts, and Samhain is the night of their release from the Underworld. Many people lit bonfires to keep the evil spirits at bay. Often a torch was lit and carried around the boundaries of the home and farm, to protect the property and residents against the spirits throughout the winter.

Many Irish and Scottish Celts appeased their dead with a traditional Dumb Supper. On Samhain Eve, supper was served in absolute silence, and one place was set at the head of the table "for the ancestors". This place was served food and drink without looking directly at the seat, for to see the dead would bring misfortune. Afterwards, the untouched plate and cup were taken outside "for the pookas", and left in the woods. In other traditions, this is the night to remember, honor, and toast our beloved departed, for the veil between the living and the dead is thin, and communication is possible on Samhain Eve

Animals and food supplies needed special protection during this time, too. Samhain marked the time cattle, on which the Scottish Highland economy depended, were brought in from their summer grazing to their winter fold. The Gods were petitioned to protect the cattle during the long, hard winter. By now, the winter store of food had been harvested and stored.

On Hallowmas Eve, ere ye boune to rest,
Ever beware that your couch be blest;
Sign it with cross and sain it with bread,
Sing the Ave and the Creed.
For on Hallowmas Eve, the Night Hag shall ride
And all her nine-fold sweeping on by Her side,
Whether the wind sing lowly or loud,
Stealing through moonshine or swathed in cloud.
He that dare sit in St. Swithin's Chair,
When the Night Hag wings the troubled air,
Questions three, when he speaks the spell,
He must ask and She must tell.

Samhain is also the night of the Great Sabbat for the witches (Ban-Druidh, in Scots Gaelic). On Hallowmas, all the witches of Scotland gather together to celebrate, prophesy, and cast their spells. Tradition has it that on this night, they can be seen flying through the air on broomsticks and eggshells, or riding black cats, ravens, or horses on their wild Hallowmas Ride. The rural people did not dare step outside their doors for fear this night. Some say the Queen of Witches is the Irish Morrigan (also called Morgan le Fay). In other traditions, the Blue Faced Hag of Winter - the Calleach - rules this night.

A good example of a Scottish Highland ghost story (as told to me by Clan Donald member, Kenneth Wiepert), is about Clan Donald's own witch. He told me the following tale:

" The MacDonald's of Glen Coe have their own witch. Her name was Sidiethe, and she was a Water Witch with fair skin and red hair. She was always seen in a white robe with a black cape. Sidiethe often sings along the banks of Loche Linhe, near Glen Coe and sometimes she is weeping. Shortly before the massacre at Glen Coe in 1692, she was seen washing clothes at the ford of the river while she wept. (Ed. Note: often the bean sidhe (banshee), attached to a great household is seen washing clothes or shrouds while she weeps, prior to a tragic death or catastrophe.)

Sightings of this ghost go back as far as the 1100's. She is also known as the White Witch of Glen Coe. Loche Linhe is reported to have a kelpie, as well!"

Faeries migrated from the summer hillocks to the winter barrows on Samhain night. If you had families that were captured by fairies that year, this was the one night you could win them back, be snatching them off their faerie mounts as they rode by. The famous Scottish legend, Tam Lin, is the story of a faithful young maiden that rescued her lover from the faeries on this fateful night.

Many of the traditions of Halloween derive from Pagan and Druid customs. It is a time of prophesies, of disguising oneself to avert evil, of performing rites of protection from the dead and Otherworldly spirits. The ancient Druid practice was to circle the tribal Samhain bonfire with the skulls of their ancestors, who would protect the tribe from demons that night.

In modern Scotland, children have inherited the ancient custom of disguising themselves in costumes. These "guisers" wear masks, or blacken their faces. They carve turnips in the shape of skulls and place a candle within, creating an eerie effect. The children travel from door to door, performing or singing for their treats. When they are not rewarded for their antics, they resort to tricks.

Those with the Second Sight (Taibhsear, in Scots Gaelic) were often sought this night for traditional Halloween fortune telling. These persons were invited to gatherings to entertain guests with their arcane arts. One method was to prick an egg and let the contents drip into a glass of clear water. The Taibhsear could read the shapes, much like a crystal ball, and predict the supplicant's future.

Apples were the fruit of the Other World, a land sometimes called Avalon or Avallach - the Isle of Apples. They are often used for magic and fortune telling. A young woman would peel an apple all in one paring, and throw it over her shoulder on Samhain Eve. The peeling would take the shape of the first initial of the man she would marry. Eating an apple in front of a mirror while combing your hair will conjure your true love's image in the mirror. Another tradition is "dunking for apples". Apples are placed in a tub or barrel of water, and dunkers will try to retrieve these apples with their teeth. Those who succeed will have good fortune the following year.

Hazel nuts were also used in matrimonial divination. Two groups of "Sweetheart" hazel nuts were placed within the hearth fire; one group was marked with the names of the village's eligible maidens, and the other with the eligible bachelors. As the nuts popped, the names of the pairs were romantically linked. On a more somber note, people sometimes placed a hazelnut with their initials on them in the hearth fire. If the nuts were missing the next morning, the unlucky person would not survive the year. Hazel is a sacred tree in Irish and Scottish mythology. In Ireland, nine hazel trees grew around the Well of Segais, where the sacred Salmon lived. This was the source of all wisdom. Using hazel nuts at Samhain availed seers of that sacred wisdom.